Cashing In: Writers and their Typewriters 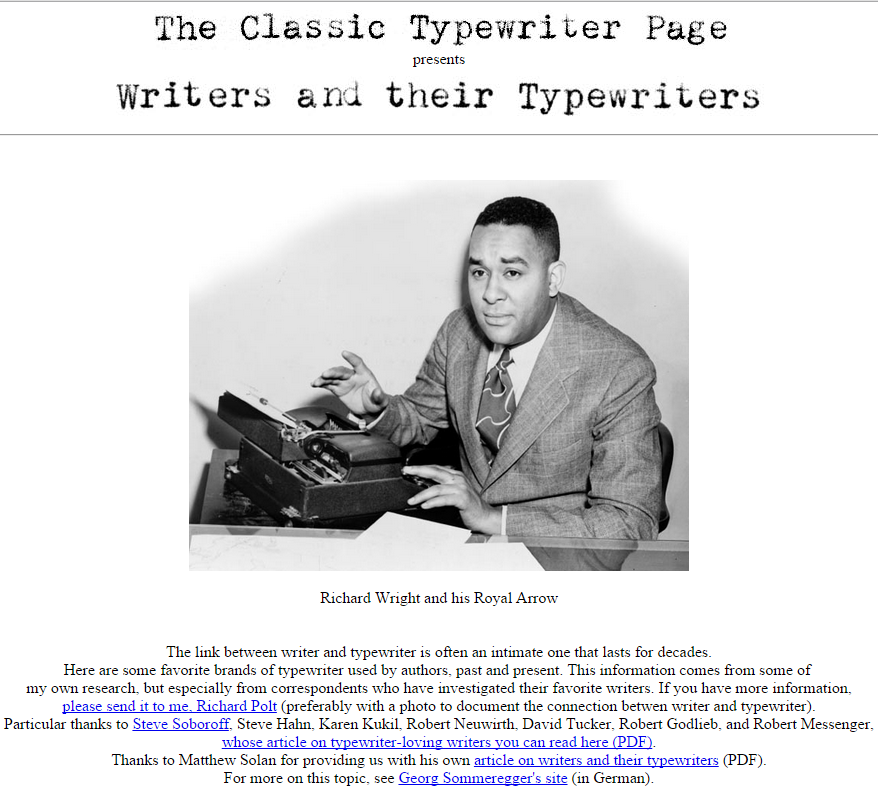 When, at the dawn of the New Millennium, I started collecting typewriters and studying their history, one of the two "must" go-to websites I found was Richard Polt's The Classic Typewriter Page, which will celebrate 19 years online this coming Tuesday, December 9.
One of the great things about Richard's site - and one of the things that makes it stand out so much among online typewriter information resources - is that he has continued to constantly update it over all these years, keeping it as fresh as it ever was, and even more informative. So few do this.
A "must" go-to on this go-to site is the list of Writers and Their Typewriters, which Richard started to compile away back when The Classic Typewriter Page first appeared. This has been, and remains, the "master list". On the subject of writers' typewriters, few if any post-1995 print or online publications will have not gone to this list, and not borrowed from it. If they have done so, they have done so at their peril. It has always been easily the most comprehensive and accurate guide on this fascinating subject, and will continue to be so. In his introduction to it, Richard notes, "This information comes from some of my own research, but especially from correspondents who have investigated their favourite writers." 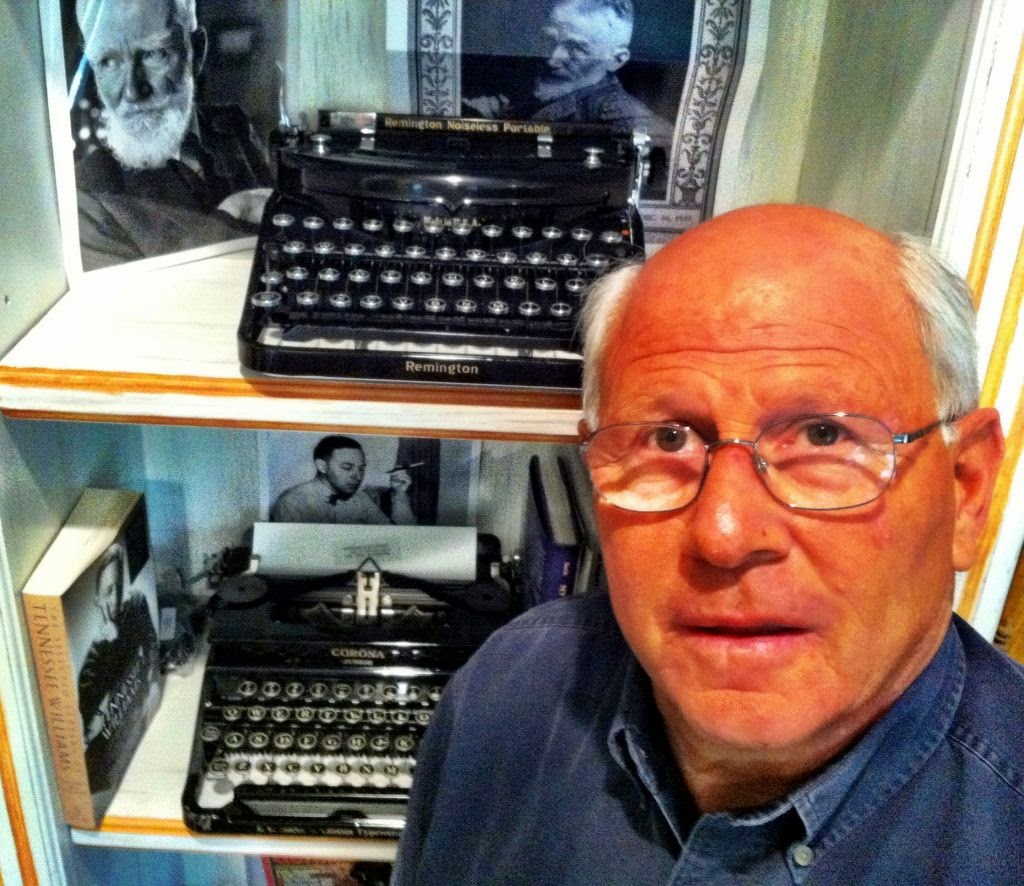 Many typewriter and literary enthusiasts have, in one way or another, benefited enormously from this extensive research. I know I have, and often. In Australia, both Richard Amery and I have given typewriter presentations which have used as a reliable guide details gleaned from Richard's page. As well, just about every man and his dog on Pinterest have used, entirely uncredited, the image of some of my typewriters which was the somewhat misleading cover of the inaugural issue of Smith Journal, three years ago. 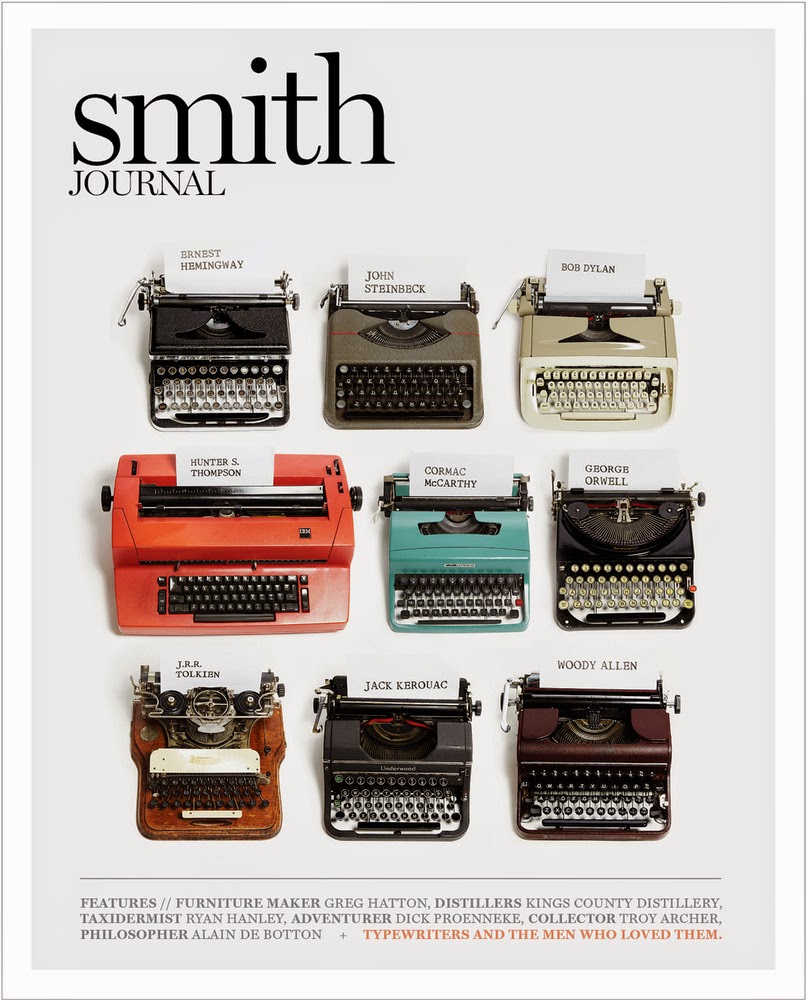 But I'm also confident that I've helped supply as well as supped on Richard's site. Richard has had the good grace to acknowledge contributions, including my own and those from Steve Soboroff (above), Steve Hahn, Karen Kukil, Robert Neuwirth, David Tucker, Robert Godlieb, Matthew Solan and Georg Sommeregger. 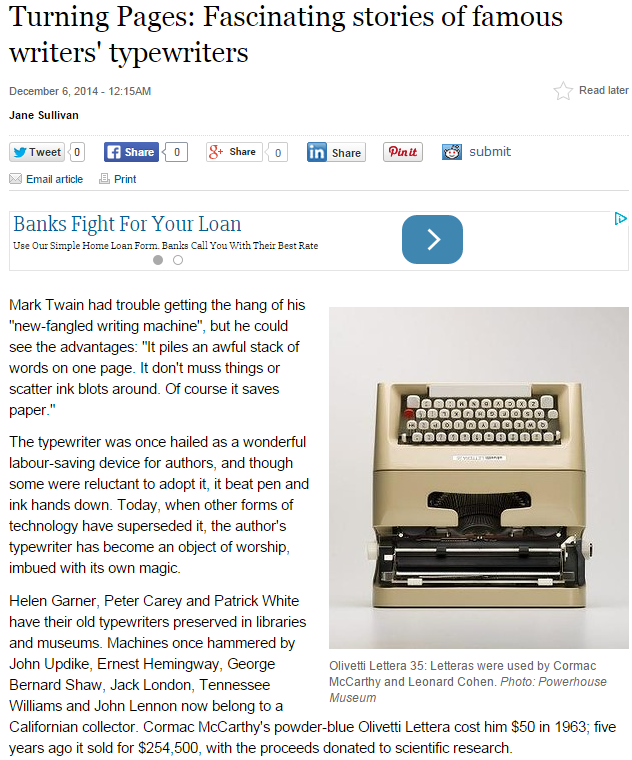 There are Olivetti Letteras and there are Olivetti Letteras, and this one isn't anything like those Letteras (the 32 and 22 respectively) McCarthy or Cohen used.
I readily confess I've not yet read the book which was plugged in this morning's editions of The Sydney Morning Herald and The Age in Melbourne, Zoë Sadokierski's  Writers' Typewriters. But naturally I am very much hoping that, when I do, I find a full and frank acknowledgement of Richard's pioneering work in this area. I have absolutely no doubt that, without Richard's extensive list, authors like Sadokierski would struggle to be able to compile the works that they do. 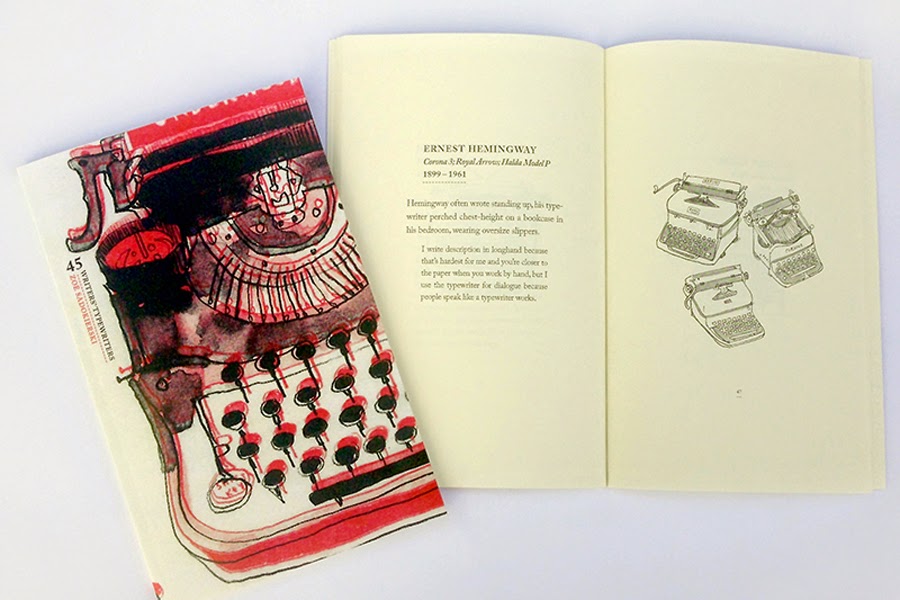 Sadokierski is a designer, illustrator and writer who lectures in the School of Design at the University of Technology, Sydney. Her book follows an exhibition called Type Horses: Writers and Their Typewriters, staged in Sydney three years ago. 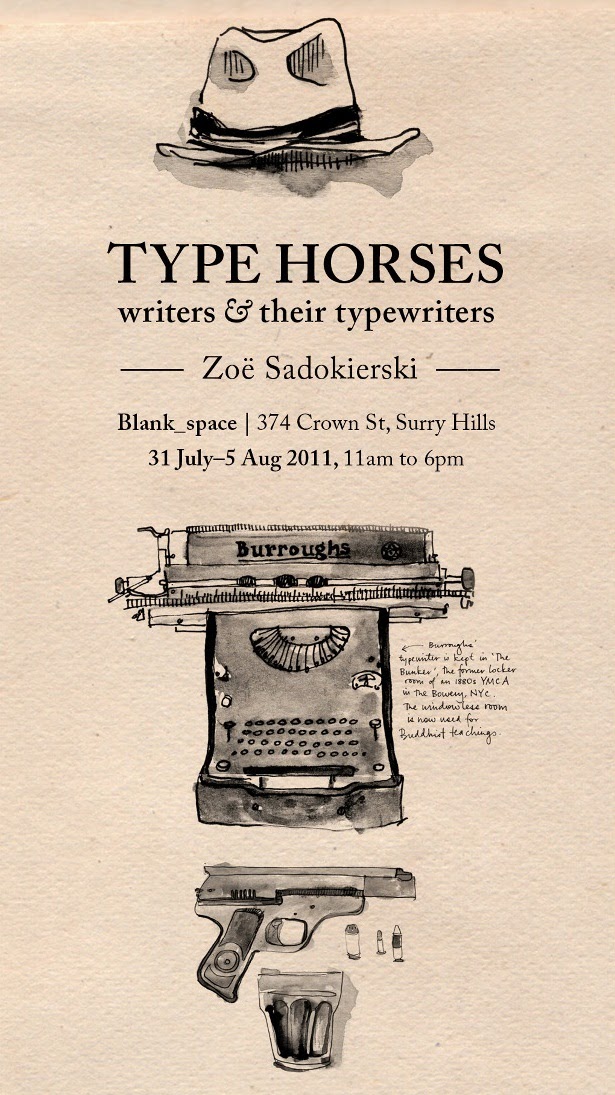 As for so-called journalists who write articles about typewriters, or books about typewriters, they've become all too fond of cherry-picking information from online sources, including blogs, without so much as even a passing reference - or, for that matter, a bit of cross-checking.
Fairfax Media's Jane Sullivan, for example, talks about "a Californian collector". Why not identify Steve Soboroff, for goodness sake? 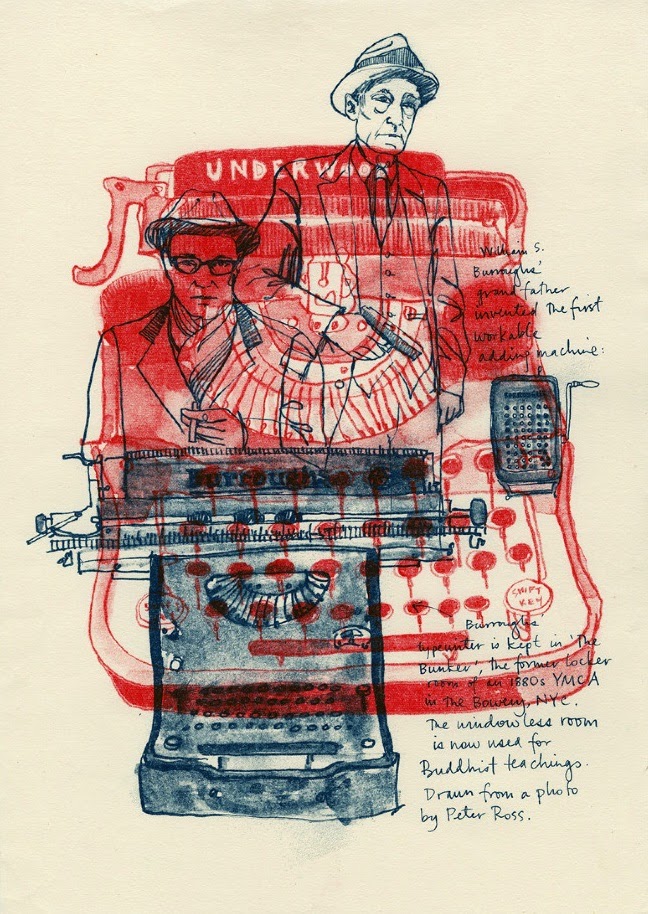 Did Burroughs ever own or use a Burroughs typewriter?
Sullivan says Sadokierski "used photographs of 45 famous authors' typewriters from auction catalogues, library and museum archives, and literary fan pages". I'd be willing to bet good money that "literary fan pages" embraces the excellent typewriter collector websites and blogs that are out there in abundance. From my considerable experience in this area, auction catalogues and library and museum archives don't offer a lot. Websites and blogs are undoubtedly the richest sources of information. In the main, what authors of auction catalogues (with the notable exception of Uwe Breker) and library and museum archives know is what they have found from the websites and blogs of typewriter collectors and historians - not the other way aroud!
But even then ill-informed people will make silly mistakes. Sullivan says "J. R. R. Tolkien bashed away with two fingers on a Hammond Varitype". Umm, does she mean a VariTyper?

Sullivan adds, "Perhaps the weirdest typewriter, the Oliver 5, belonged to Franz Kafka. It bristles on all sides with mysterious knobs and antennae", She quotes Sadokierski as writing, "I can't be the first person to look at this thing and see where Kafka's inspiration for morphing into a bug came from." One wonders what Marty Rice will make of the Oliver being called a "weird thing". Sullivan also follows the Evija Trofimova "rhizomatic facto-fictional" path: "Typewriters became eerily alive. Paul Auster ... he began to think of his machine not as an it, but as a him." No, his Olympia never "talked" to him, Auster apparently told Trofimova, to Trofimova's considerable surprise. 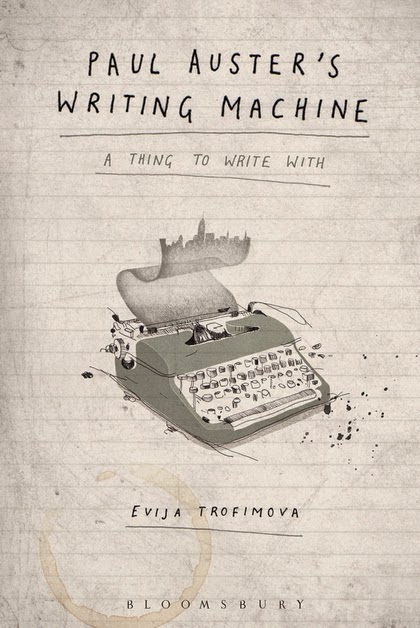 The closing lines of this article do, nonetheless, appeal to me: "And a Roman Catholic priest told Anne Sexton that 'God is in your typewriter'. In her poem The Room of My Life, she described the 48 keys, 'each an eyeball that is never shut'."


As for the Soboroff Typewriter Collection which Sullivan couldn't bring herself to mention, there are videos online from an exhibition at the Palley Centre for Media in Beverly Hills. See them here. 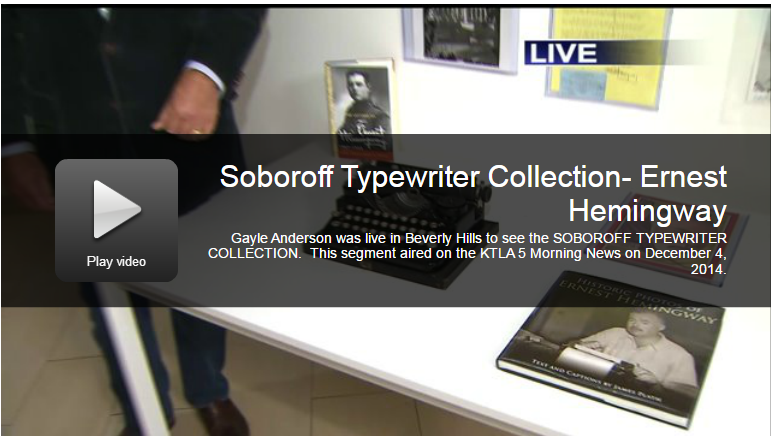 Posted by Robert Messenger at 09:41

I like the illustrations. I'm not holding her breath to see if she gives my website credit! If she doesn't, can I rip off one of her illustrations for my book?

Excellent point, RP. I'll keep an eye out and give you the OK!

I agree with Robert; good point Richard.
REmember Adwoa got ripped off from a commercial designeer and it caused quite a stir. Authors and publishers like to brag about copyright, but they forget blogs and sites are also under copyright protection.

I find Richard's site along with your blog 2 of the must-go-to sites whenever I need information on typewriters.