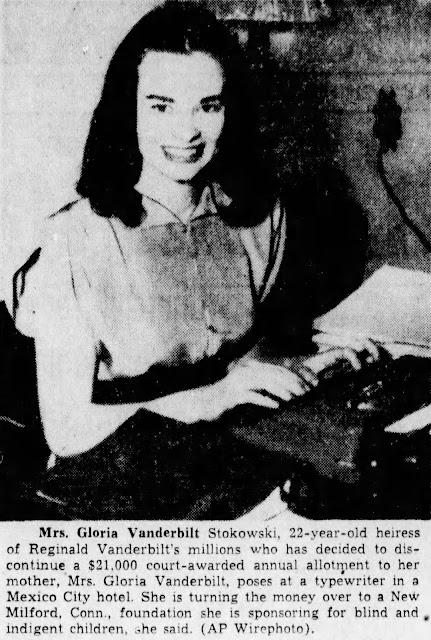 Gloria Vanderbilt had her Hermes Baby portable typewriter.
Green Bay Press-Gazette, March 16, 1946
Gloria Laura Vanderbilt died yesterday, aged 95, at her home in Manhattan, after having been diagnosed with stomach cancer earlier in the month. Vanderbilt was an American artist, author, actress, fashion designer, heiress and socialite. She was a member of the Vanderbilt family of New York and the mother of CNN television anchor Anderson Cooper.
In the 1970s, Vanderbilt became known through a line of fashions, perfumes and household goods bearing her name. She was particularly noted as an early developer of designer blue jeans.
She is believed to be one of the many inspirations for Holly Golightly in Truman Capote's 1958 Breakfast at Tiffany's, along with Onna O'Neil, Carol Grace, Maeve Brennan, Doris Lilly, Dorian Leigh and Leigh's sister Suzy Parker.
Posted by Robert Messenger at 20:30 1 comment: