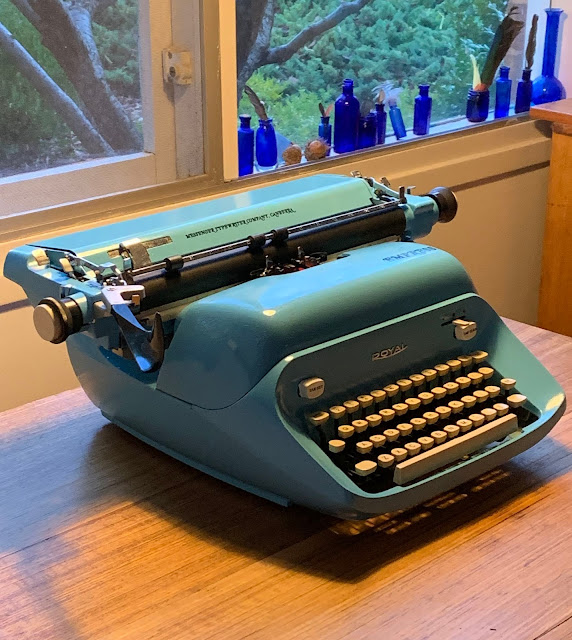 The restored Empress
This 50th anniversary of the Moon landing has been both a joyous and eerie time. The eeriness is mostly typewriter related.
Some weeks ago an older lady I only know as Mrs Miller (with no connection to a McCabe, as far as I know) contacted me out of the blue with the offer of a “fairly modern” Royal typewriter. Given that description, I was expecting a Nakajima portable, but Mrs Miller’s gift turned out to be a hefty 32lb standard – which I soon discovered to be a mid-60s Empress. 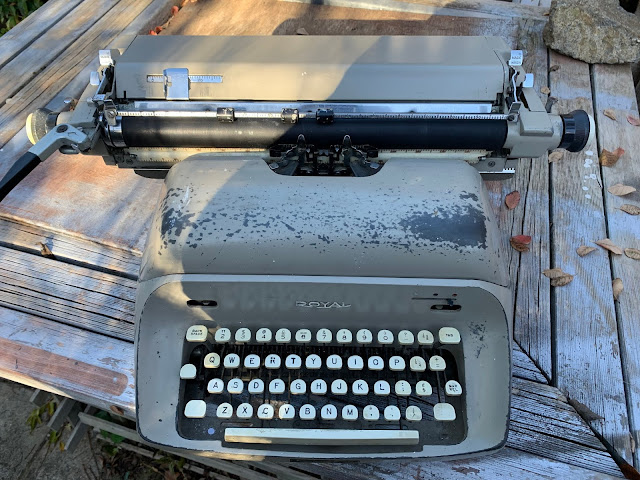 Mrs Miller's gift
The machine was in serious need of restoration, so I took it completely apart, repainted it and reassembled it. It now looks absolutely splendid, but the tab set and tab clear buttons were missing when I took possession of it, plus the small knob on the ribbon colour selector switch. As well, the two ends of the platen knobs were broken. I attached some ad hoc buttons and repaired the platen knobs as best I could, but it still seemed a pity the gorgeous-looking restored Empress was not as manufactured and sold in every way.
I had photographed the typewriter in the shabby state I received it, throughout the restoration process and the finished – or so I thought at the time – product. I was planning to publish a blog post on the work, but Instagram was as far as I got. I would probably have got around to posting in the next week or so.
In the meantime I have come down to the town of Kyneton in country Victoria for a family gathering. On Friday, the eve of the Moon landing anniversary, I popped into the Salvation Army op-shop to see it had any typewriters – as one always does - and lo and behold there was another Royal Empress. It has all the buttons and knobs intact, so naturally I’ve grabbed it as a spare parts machine. 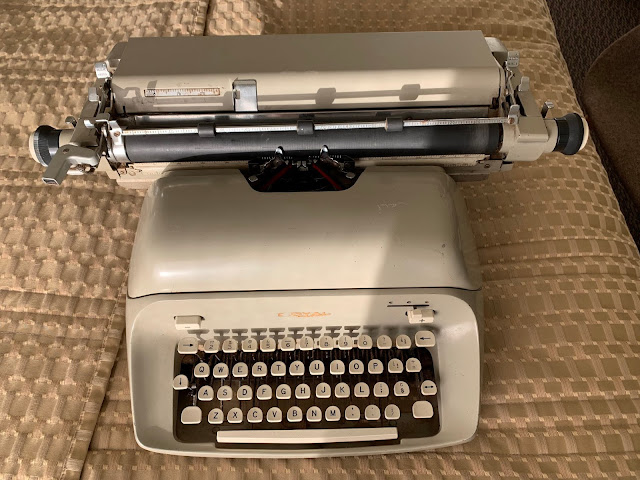 The Kyneton Empress
Mrs Miller’s gift was the first Empress I’d ever seen – and, as I thought back then - the first time I had ever even been aware of the Empress (there’s a very interesting story behind its production, by the way). Anyway, upon researching the model, I discovered that three years ago I had identified it for Steve Kuterscz (“writelephant”) in Western Australia. Steve had written a blog post about a 1968 episode of Star Trek, “Assignment Earth”, in which the Enterprise time travels back to Earth and an interstellar agent called “Gary Seven” (Robert Lansing) plans to intervene in 20th Century events. Incidentally, that blog post was only added to a month or so ago, with a comments exchange between Steve and Ted Munk. (Ted’s online repair manual for the Empress was really helpful when it came to me reassembling my machine – for once, not a single spare screw was left over!) 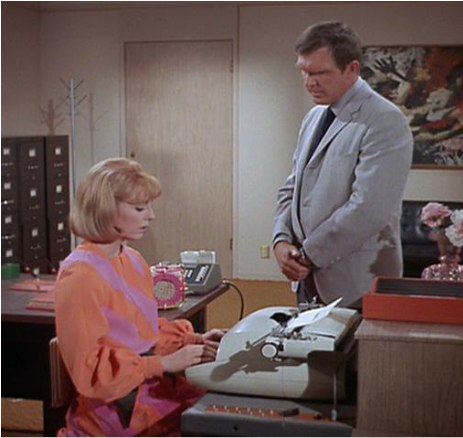 A scene from Star Trek.
The missing buttons and broken knobs aside, there was only one problem with my restored Empress – the carriage lever wasn’t turning the platen as it should. One part of the eeriness of all this is that a small part of the platen assembly had fallen off. Mysteriously, it suddenly turned up on one of my typewriter workshop benches weeks later, but I’ve yet to work out exactly where it fits to make the Express fully operational. I’ll be able to do that when I take my latest Empress apart.
The clincher in this series of weird but happy events is that, with the Moon landing anniversary in mind, I looked up my blog post from August 2015 – about the tracking stations in the Canberra area which were used to transmit images from the Moon on July 20, 1969. The key – and almost universally forgotten – link in the transmission was Honeysuckle Creek. And on my post from four years ago was an image of a station support worker.
What typewriter was she using?
Yes, you guessed it – a ROYAL EMPRESS!!! 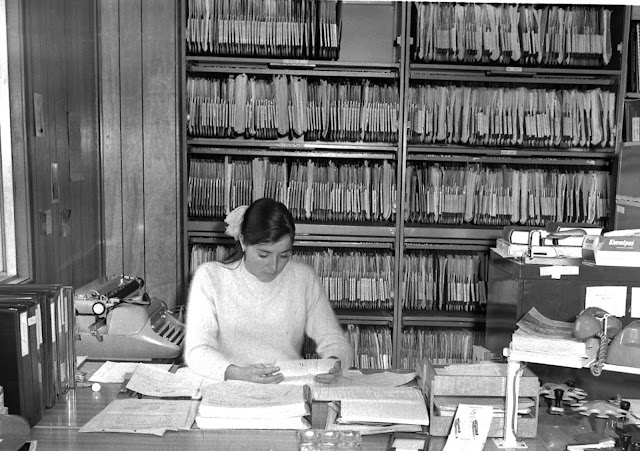 To add to all this spookiness, we found a great urban winery in Kyneton yesterday (July 20) and sampled red wine with labels showing the Earthside and Farside of the Moon. What else were we to do? 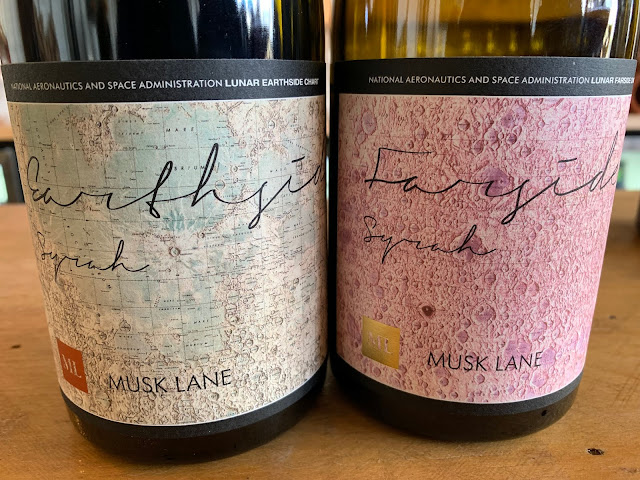 The Honeysuckle Creek Tracking Station, such an important part of the first successful Moon landing, is no longer. The facility which received the first 8½ minutes of footage of Neil Armstrong walking on the Moon has sadly been dismantled.
Honeysuckle Creek came into being when, on March 6, 1963, the Australian and United States governments jointly announced a deal to construct three US National Aeronautics and Space Administration (NASA) deep-space tracking stations just outside Canberra, in what was then termed the Tidbinbilla Valley. These stations would be at Tidbinbilla itself, completed in 1965 on the edge of the national capital, Honeysuckle Creek and Orroral Valley. All that remains of the three stations is what is now called the Canberra Deep Space Communication Complex, centred at Tidbinbilla. It is part of the Deep Space Network run by NASA's Jet Propulsion Laboratory and is the only NASA tracking station still in operation in Australia. Australia's Commonwealth Scientific and Industrial Research Organisation (CSIRO) manages most of NASA's activities in this country. 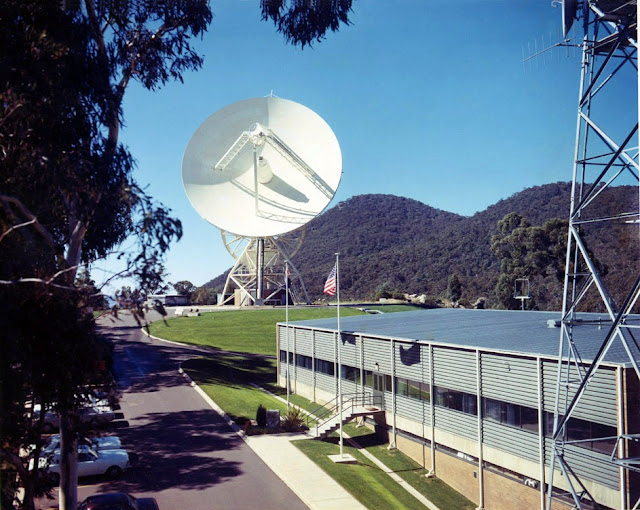 Honeysuckle Creek as it was.
Honeysuckle Creek was completed in 1967 and was built primarily to support the Apollo Moon missions, mainly communications with the Apollo Command Module. It was home to the antenna which received and relayed to the world the first historic television images of Armstrong setting foot on the Moon. 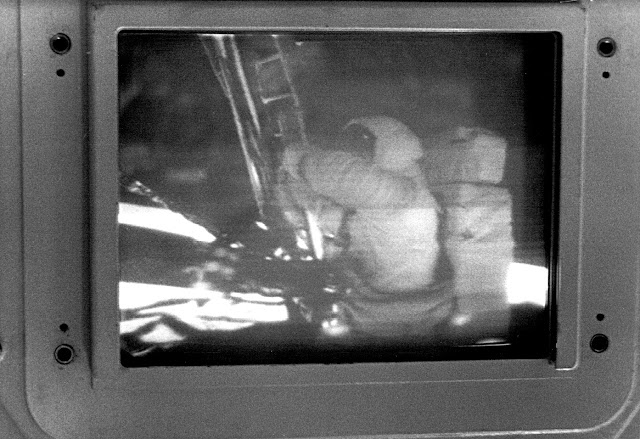 Image received at Honeysuckle Creek.
At least in the initial 8½ minutes of Armstrong's descent from the lunar module and his walk on the Moon, Honeysuckle Creek was able to receive and send (to Sydney and through Sydney to Houston) far clearer images than the Lyndon B. Johnson Space Centre in Houston, Texas. However, nearby Parkes in New South Wales was then able to provide the better images.
Honeysuckle Creek and Tidbinbilla also had voice and telemetry contact with the lunar and command modules. After the Apollo Moon missions ended in 1972, Honeysuckle Creek began supporting regular Skylab passes, the Apollo scientific stations left on the Moon by astronauts, and assisting the Deep Space Network with interplanetary tracking commitments, in support of the Viking and Voyager projects.
Honeysuckle Creek was closed in 1981 and its 85-foot antenna was moved to Tidbinbilla. 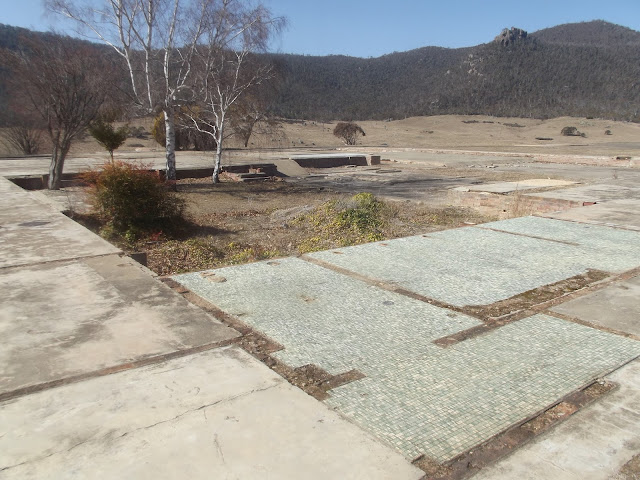 Honeysuckle Creek as it looks now.
Posted by Robert Messenger at 11:21 5 comments: