Bubbling With Fun, Typewriters Galore: Type-In in the Park in Canberra 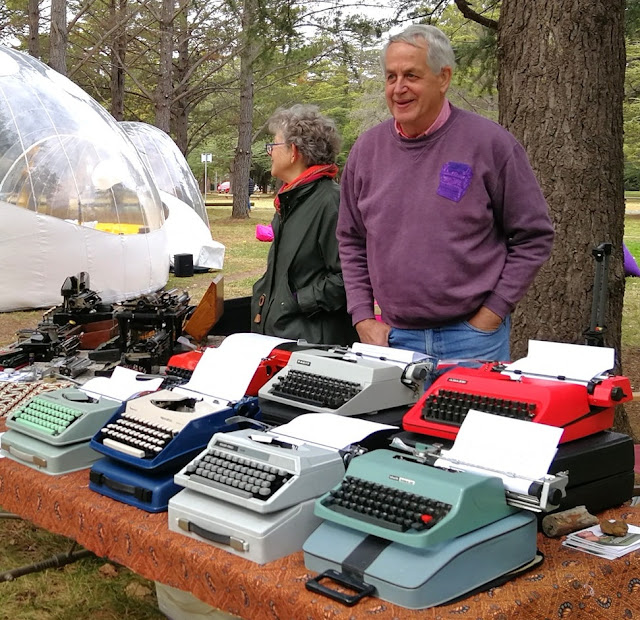 The Typewriter Festival in Haig Park in Canberra on Sunday turned out to be as much fun as organiser Ms Constance Spry forecast it would be. The weather forecast was pretty accurate, too, for a bright sun bathed the vast park in a warm glow which matched the passion for using typewriters under The Bubble. The day was wedged into an otherwise wet weekend, so the Typewriter Gods were obviously smiling down on us. 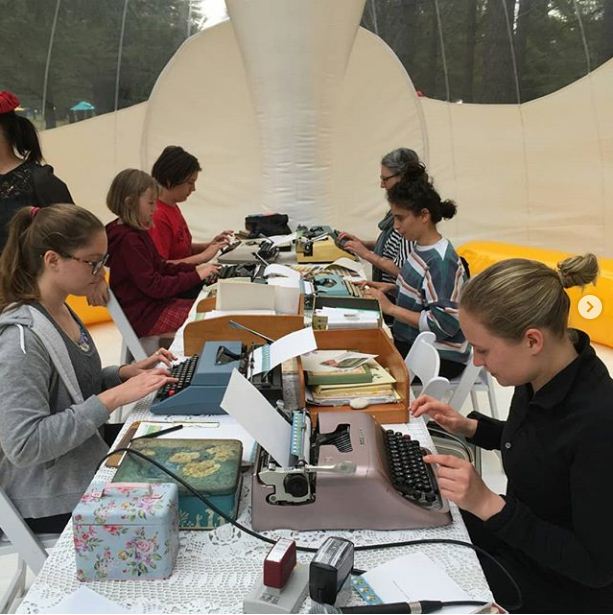 Hundreds of people turned up, many of a certain age reminiscing about their days of using typewriters as work tools. Others, of a somewhat younger set, wanted to talk about their own typewriters. But the day belonged mostly to children who had never seen typewriters before, let alone had the chance to use them. 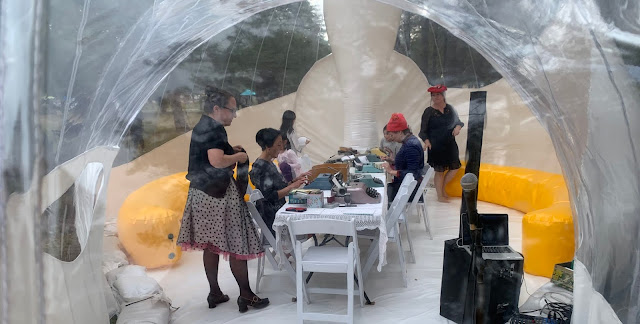 The Bubble, inflated for the first time in Canberra, proved a very suitable setting for the Type-In. 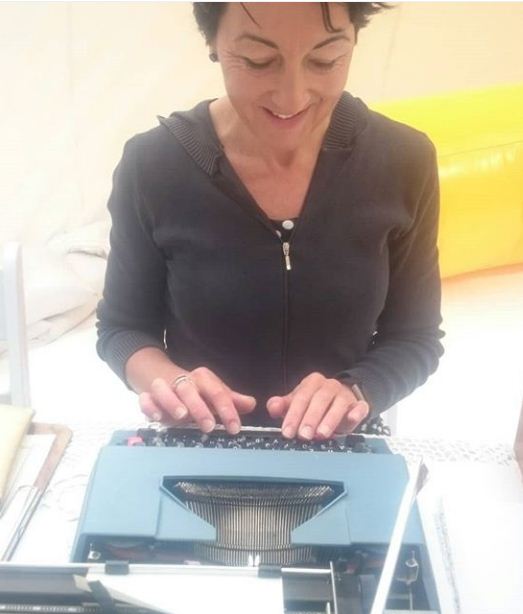 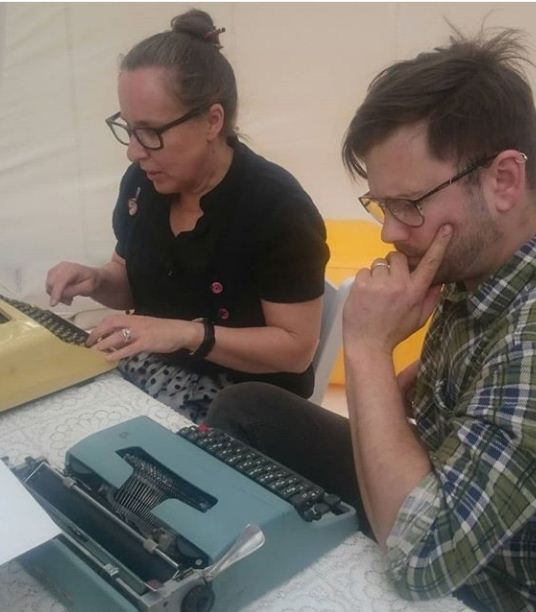 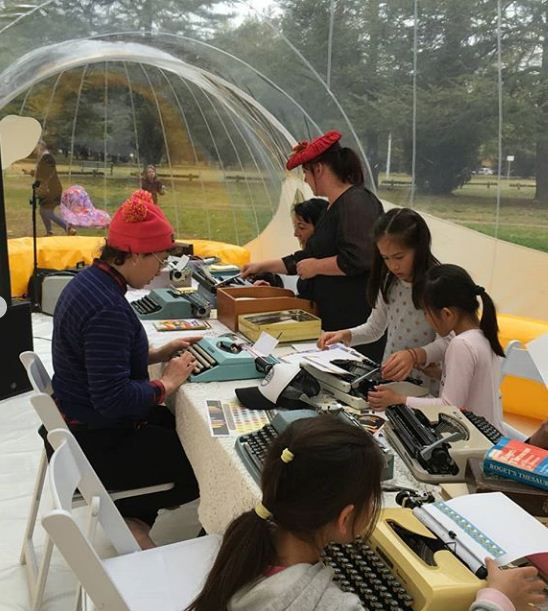 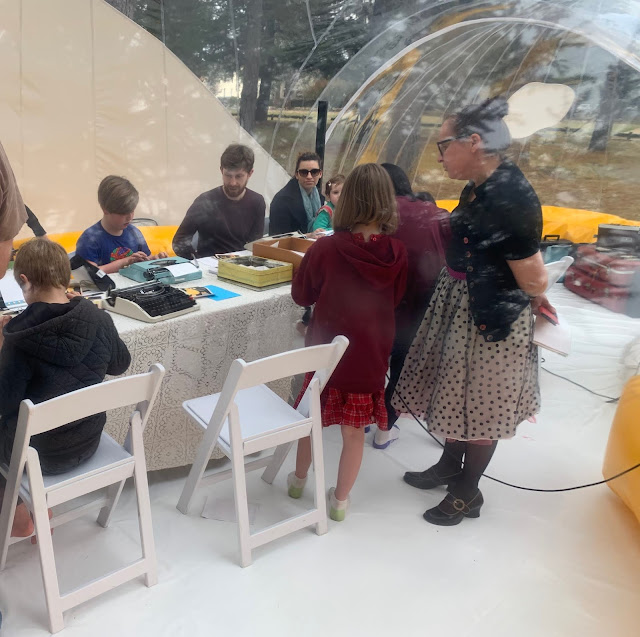 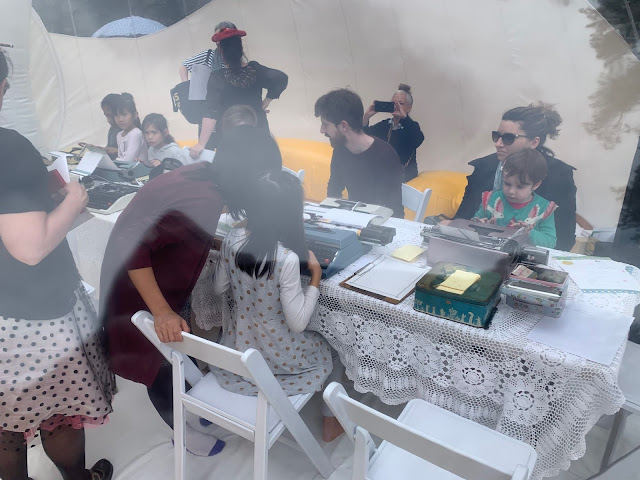 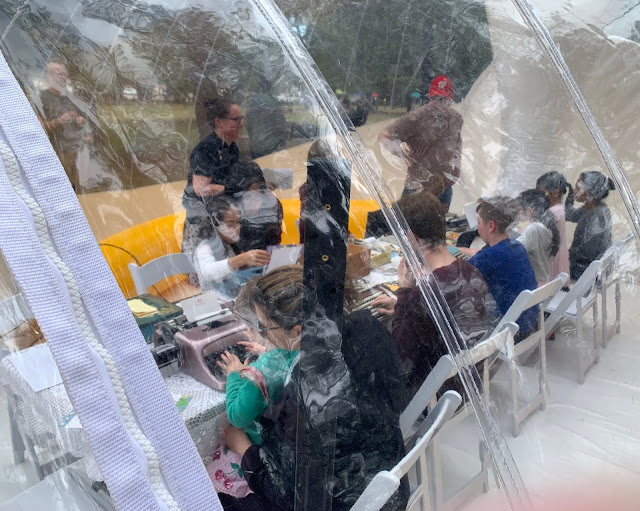 This is what it looked like when being tested in the park :

Before the event started, I was asked to name one of the pine trees after my favourite typewriter: 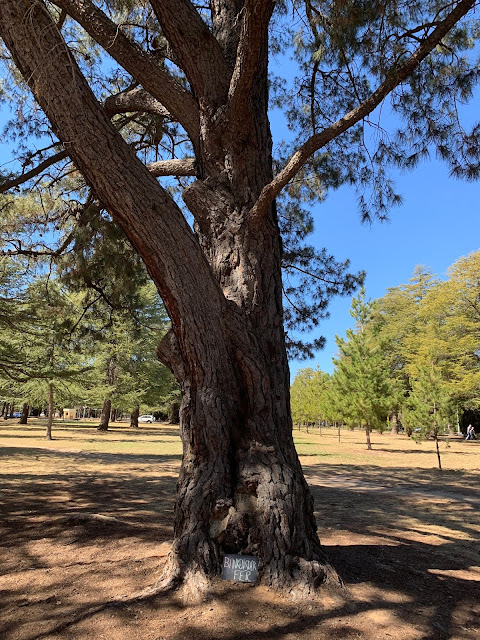 I had two tables outside displaying some historically interesting old typewriters and a range of modern portables for sale: 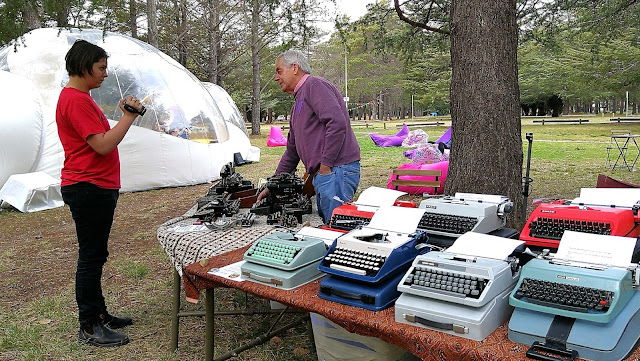 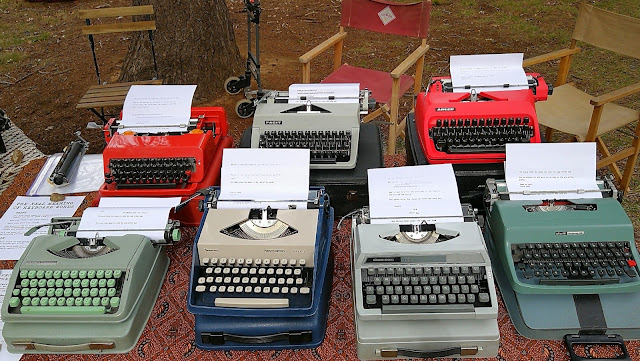 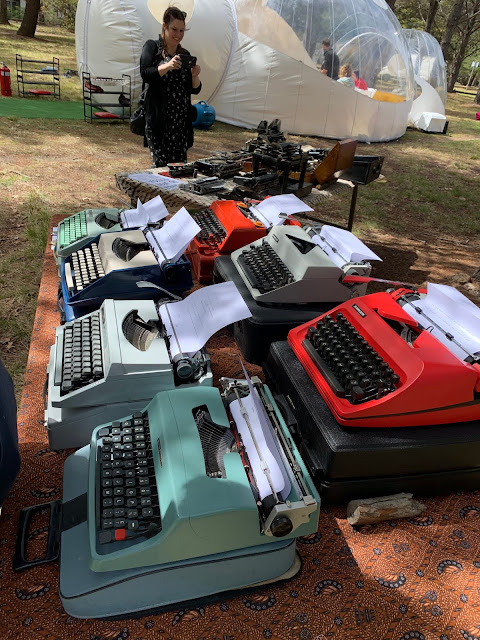 Lined up at home ready to go: 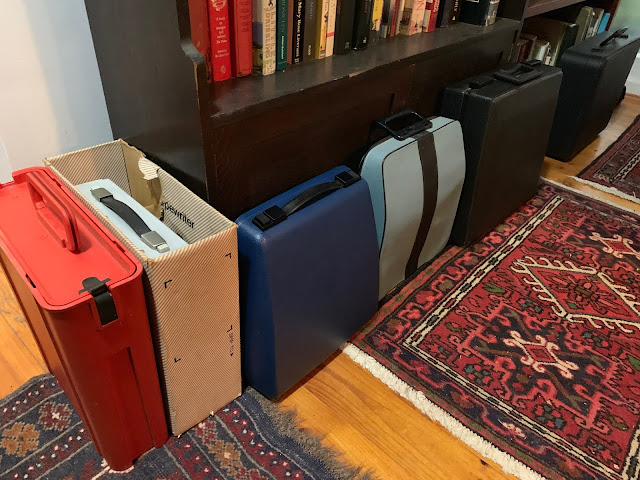 Ms Spry brought along many more typewriters than I had available: 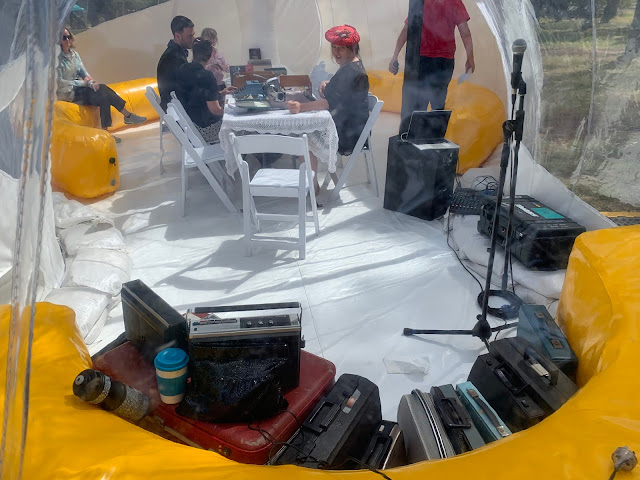 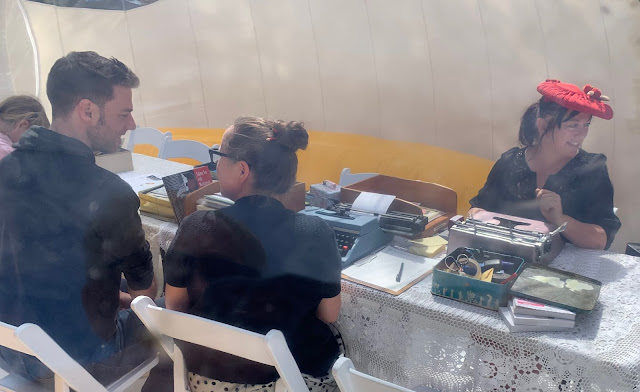 But she still wanted to try out one of mine: 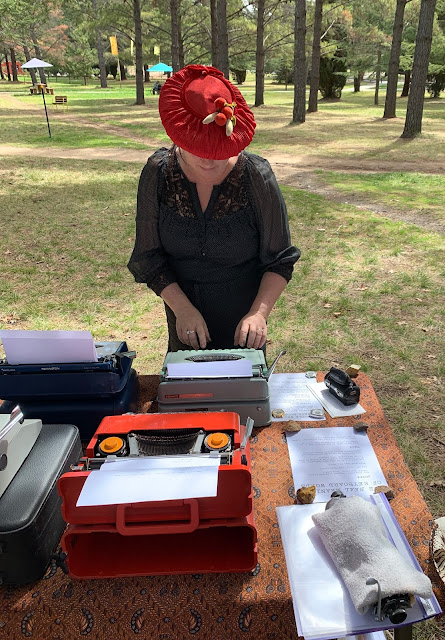 At one point there was a parade of greyhounds and whippets. Though this was not related to the typewriter event, I pointed out there were at least two dogs in each of our typewriters: 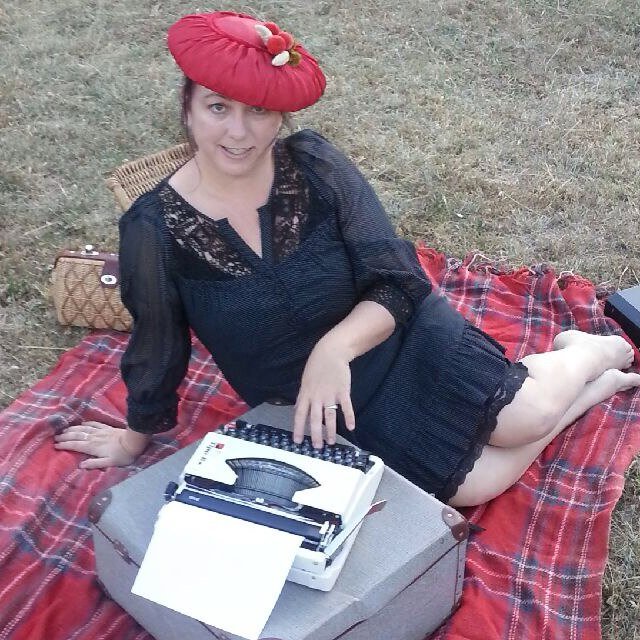 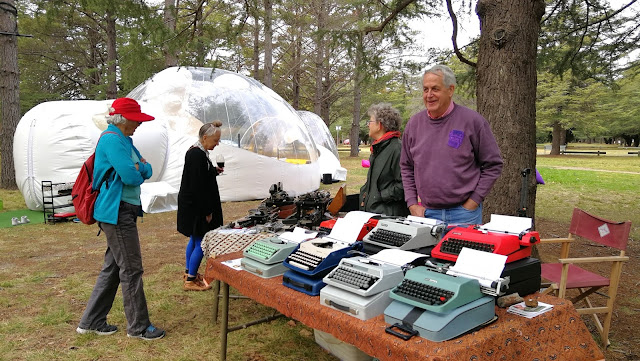 Posted by Robert Messenger at 15:27 3 comments:

Collaborating with the Nazis: The Black Mark on Remington’s Typewriter History

There are many damnable acts in the chequered history of the Remington Typewriter Company, but none so execrable as Remington’s collaboration with the Nazis in World War II. In the First World War, it was absurd that Australian Prime Minister Billy Hughes should briefly declare Remington an “alien company”. But there was nothing risible about Remington’s each-way bet with the Allies and Axis between 1941-45. Remington was at once supplying arms to the US Army while materially assisting the German Army and Air Force.
One American newspaper headed its article on the affair, “Hitler Aided by Remington Rand Plant in Reich”.
I became aware of this sordid business while following up on Richard Polt’s August 28 post on The Typewriter Revolution blog about his Remington Torpedo (Dynacord) typewriter. To my amazement my searches led to revelations about Remington’s secret machinations to keep its greedy hands on Torpedo’s German typewriter factory, which had been converted to produce Nazi war equipment. Remington had put the plant in the temporary care of three Nazi Party members, at least two of whom had close connections to Third Reich leaders Himmler and Göring. 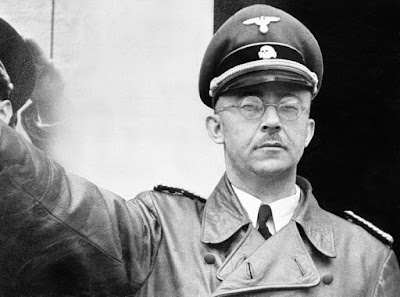 SS chief Himmler
The story was broken in American newspapers on July 13, 1945, by war correspondent and former Office of War Information operative Pat Frank (real name Harry Hart Frank, 1908-1964).  At the time Frank was working for the Overseas News Agency, which had been set up the Jewish Telegraphic Agency in 1940. The ONA was aligned to the British Security Coordination, the New York outpost of MI6, the British equivalent of the CIA, and it provided press credentials to British spies. It may have even collaborated with the predecessor to the Russian spy agency, the KGB. The ONA has since been accused of planting fake news in US newspapers, but in this Remington case the story was 100 per cent true. 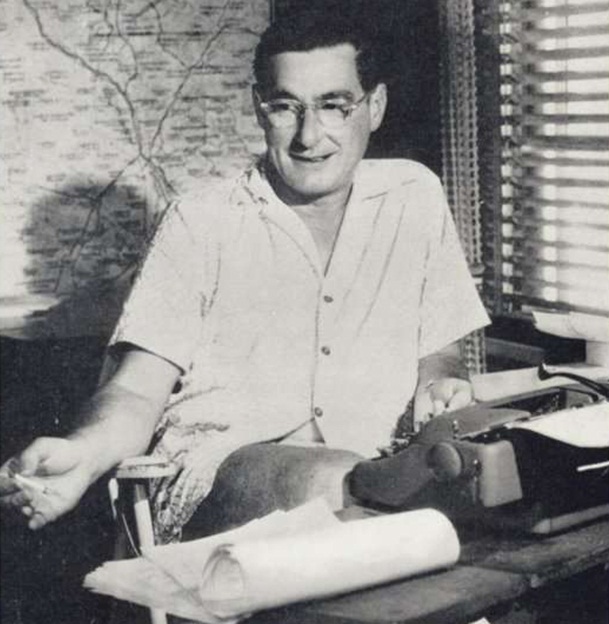 Pat Frank at his Smith-Corona portable typewriter.
Would he have touched a Remington?
Frank reported that “Remington Rand’s German subsidiaries produced war materials for the Nazis throughout the hostilities, according to evidence uncovered by [American] Military Government [AMG] officials [in Frankfurt]. [Remington’s] factories in Germany … were producing parts for the Wehrmacht and Luftwaffe, including flak guns. Both of the [Frankfurt] plants have been sequestered, along with their cash assets and profits, by the AMG … Torpedowerke Aktien-gesellschaft before the war manufactured Torpedo bicycles and typewriters. It was entirely owned by Remington.” 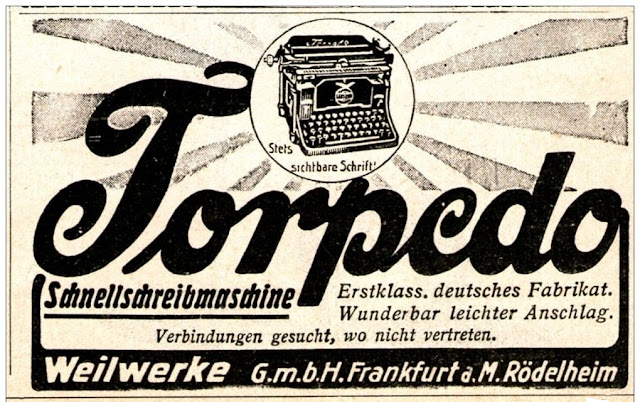 Frank might well have substituted the word “is” for “was”, for it transpired that Remington had basically “lent” its controlling interest in Torpedo to three Nazi Party members for the duration of the war. One temporary owner had been Helmuth Roehnert of the Rheinmetall-Borsig typewriter organisation, a director of the Dresdner Bank who was closely linked to Heinrich Himmler, Reichsführer of the Schutzstaffel (SS), and Hermann Göring, commander-in-chief of the Luftwaffe. Roehnert was a member of the Nazi production council under Albert Speer. Roehnert died before the end of the war. Another Torpedo part-owner was Max Wessig, also of Rheinmetall-Borsig AG and connected with Göring. Wessig had been involved with the Nazis from the time of the Spanish Civil War. 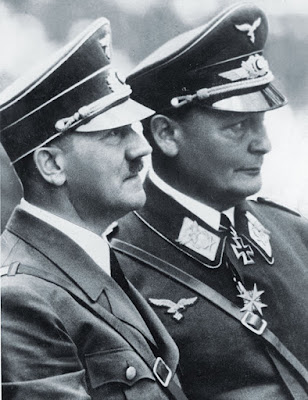 Hitler and Göring
At the head of this group was Fritz Heinrich Harms, who continued to manage the Torpedo operation throughout the war years.
In late June 1945 Harms approached the AMG’s property control officer Lieutenant Abraham Richstein, asking that materials be provided for the resumption of typewriter production. He also wanted to be able to resume communications with Remington Rand in the US. But Richstein’s inquiries unearthed that because of a deal done between Remington and Harms in 1941 (just before Nazi Germany declared war on the US on December 11), Remington had been able to avoid being listed by the US State Department as an American company with assets in Germany.
Harms told Richstein this was a mere “technicality” and that the “loan” of Remington’s majority stake in Torpedo was done “to avoid trouble”. Harms said James Rand himself had told Harms “to play ball with the Nazis”. Remington had retained an option to repurchase the stock at any future time – and did indeed regain the stock. The plants were valued at $US7 million and cash and bank deposits totalled $1.73 million, and the State Department was left with a decision as to whether Remington was entitled to the money.

Rand
On April 10, 1946, another ONA correspondent, Robert Gary, reported that “The persistent efforts of Remington Rand  … to retain the same general manager who ran the firm’s German subsidiary during the Nazi regime, have at last been crowned with success. The manager, Fritz Heinrich Harms, is back in the opulent offices [in Frankfurt] of the Torpedo Works, the German counterpart of Remington Rand, this time with the official blessing of the American Military Government.” Gary said the AMG had removed Harms in late November 1945, and investigated his Nazi ties for two months.
Harms’ “unexpected” restoration, wrote Gary, “has taken place after extraordinary transocean pressure [had been] exerted by Remington officials here and in the United States”. An examination of Harms’ case record had revealed “interesting data concerning Harms personally and his company’s international manipulations during the pre-war and war years.” Harms admitted joining the Nazi Party in 1937, claiming he did so to “protect the Torpedo works and the majority stockholders, Remington Rand, from hostilities on the part of the Nazis, and to secure profitable work for them [the stockholders, that is].”
Harms, who met high-ranking Remington officials in New York in 1939, insisted he had done nothing to assist Nazi war production. Yet, as Gary pointed out, “Torpedo Work was up to its neck in war work, producing engine parts and other aeronautical apparatus.” During this time Harms was paid an annual salary of $US85,000.
Just before the Japanese attacked Pearl Harbor, on December 7, 1941, Remington transferred $289,000 worth of its shares to Harms to ensure Torpedo Works would not be declared an enemy concern. After Harms was removed by the AMG from his role as Torpedo Works general manager, he was temporarily replaced by a Remington official from the US, Donald Brown, who worked hard to get Harms reinstated. In mid-December 1945, Remington Rand president James Rand himself intervened, cabling the AMG special board investigating Harms that he was “anxious” to have Harms back at work. With that urging, Brown and Harms called on AMG deputy director Major General Clarence Alcock, and in mid-January the AMG voted to restore Harms. 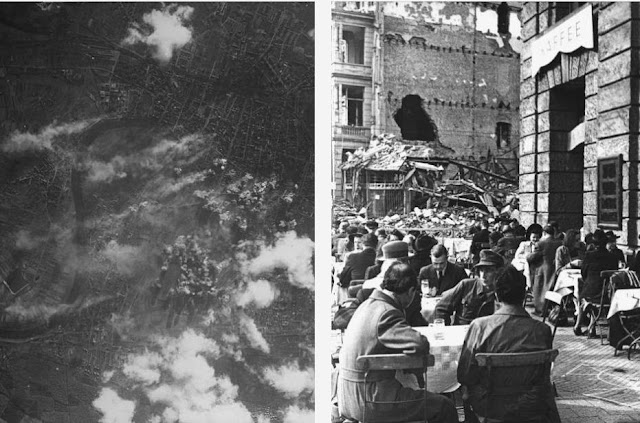 Left, 8th Air Force bombing of military installations in Frankfurt. Right, a café in Frankfurt, 1945.
Not surprisingly, this business is not recorded in any of Remington’s various histories, nor is it to be found in the section on Torpedo in Leonhard Dingwerth’s Die Geschichte de deutschen Schreibmaschien-Fabriken, Band 1 (2008). However, Dingwerth outlines the takeover of Weilwerke AG (Torpedo) by Remington, announced in US newspapers in mid-April 1932. He says Remington retained control until 1978, which, given what happened between 1941-46, is not - at least technically - entirely true. Nonetheless, given the arrangements Remington made with Harms and his Hitler henchmen, the reality is that Remington did still own the Rödelheim factories throughout the war.
Of the war years, Dingwerth writes, “During the Second World War, the Weilwerke initially continued the production of typewriters. Mainly the models Torpedo 6 and 17 were manufactured …  The factory also produced other goods for the German armaments industry. In 1942, parts of the plant were relocated to Zeist in Holland, a small town near Utrecht, to ensure continued operations. In the beginning, stockpiles that were mainly shipped to Holland were included in the outsourcing in 1943, which also included parts of the machinery production. Until the end of the war, the Dutch factory produced the Torpedo 17. 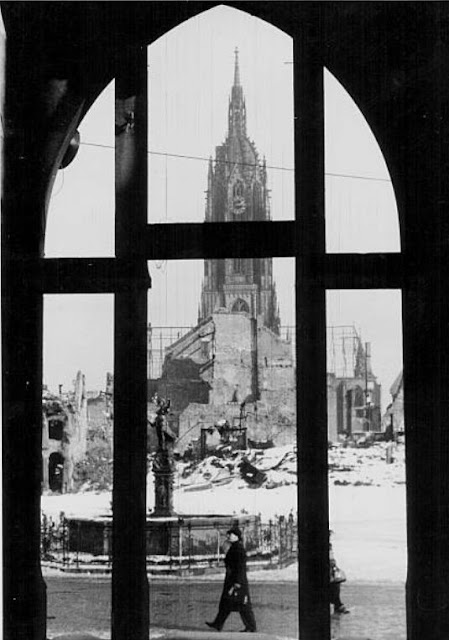 Frankfurt Cathedral amid rubble after Allied bombing, 1944.
“In 1944 the Weilwerke were hit hard by bombs. The main plant in Rödelheim was destroyed with all facilities to about 90 per cent … After the war, the rebuilding of the work in Rödenheim began very soon. The work was financed by Remington, but carried out by the company itself … Soon the typewriter production in this factory could be resumed in a modest amount at first. Since raw materials and spare parts were in short supply, the first machines were often assembled from components of different models.” 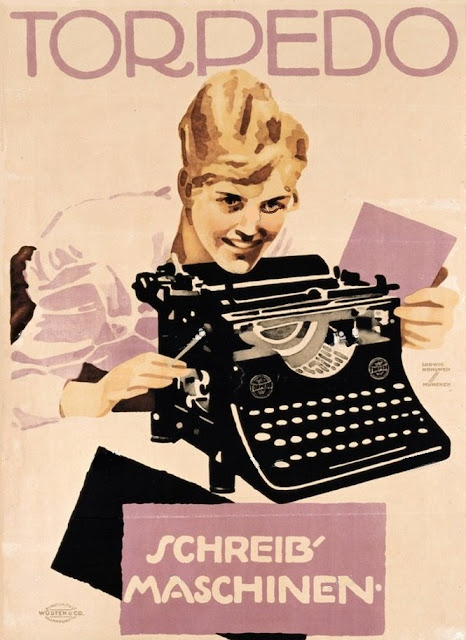 With breathtaking gall, at the end of the war Remington Rand accepted British Government money and Scottish Industrial Estates Ltd help to set up a factory west of Glasgow, on Woodside Crescent on the Hillington Industrial Estate. Even before Remington’s pact with the Nazis, in 1940-41 the Luftwaffe had killed thousands of Glaswegians in bombing raids, with planes using equipment made in Remington’s factory. Conveniently – and in the very short space of just three years - Remington’s role in colluding with the Nazis had already been erased from collective typewriter knowledge. But this black mark against the company’s name must now return to haunt it.

Posted by Robert Messenger at 17:40 7 comments:

Canberra Typewriter Fest Under a Bubble 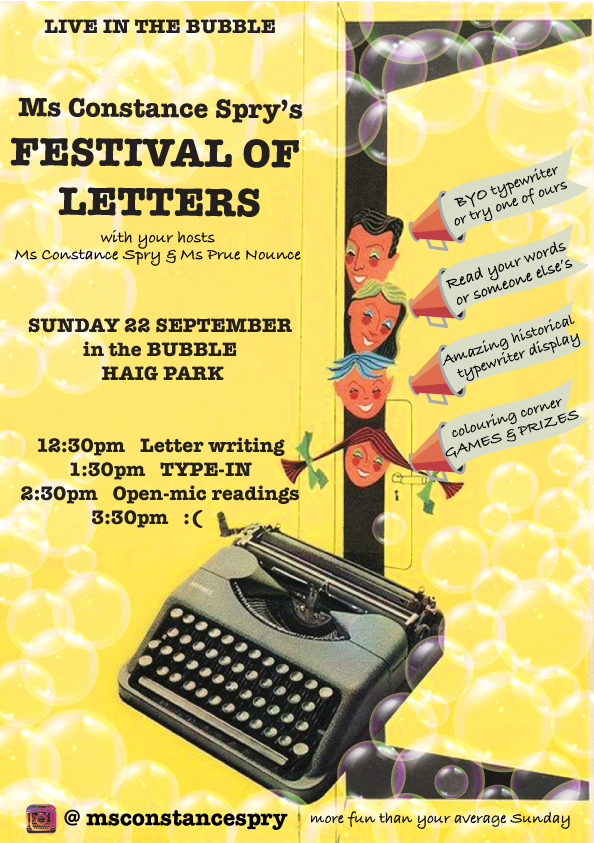 VERY excited about a typewriter event coming up in Canberra on September 22. It's under an actual (BIG) Bubble at Haig Park. I will be exhibiting some historically significant typewriters, including a Remington 2, a Blickensderfer 5, author Miles Franklin's Corona 3, a downstroke Oliver and a Salem Hall index typewriter. There will also be typed letterwriting and a Type-In. Sounds like a lot of fun. Here's what the Bubble will look like: 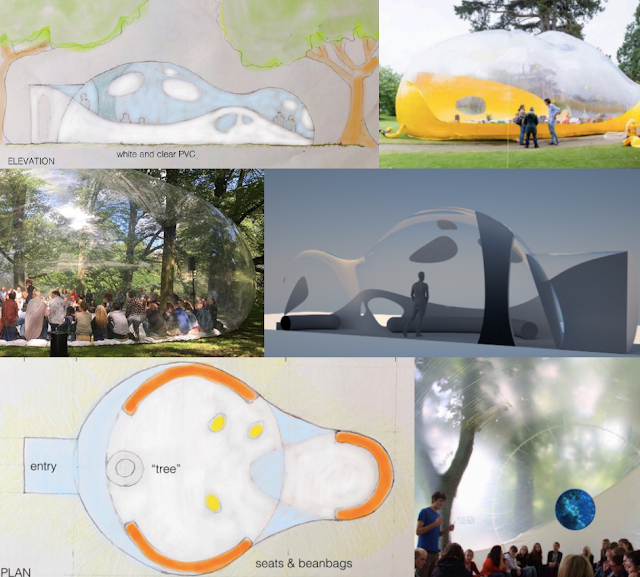 Posted by Robert Messenger at 09:28 3 comments: