The Divided States of America: How David Mamet and his Olympic Portable Typewriter Foresaw the American Nightmare 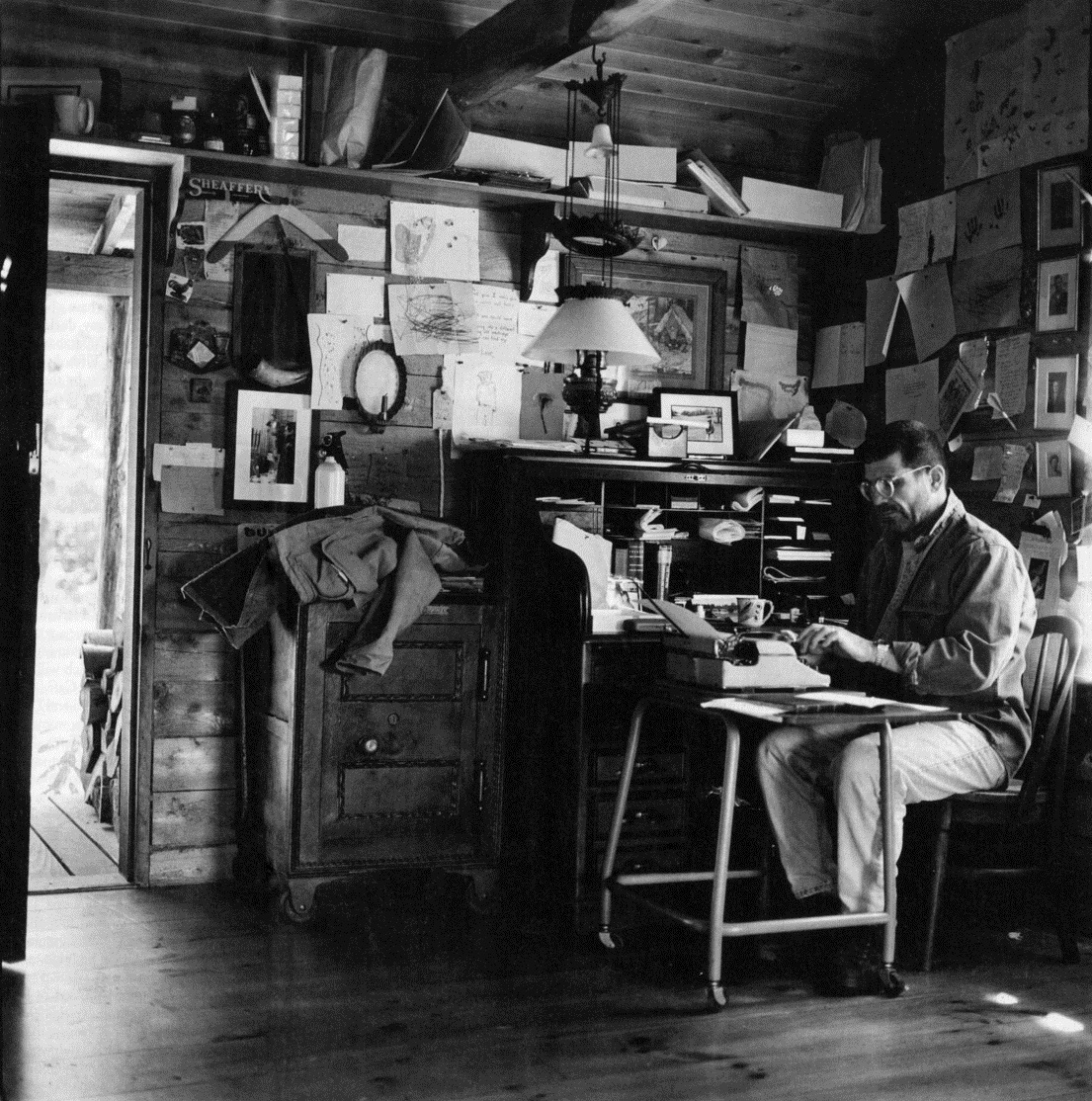 Brigitte Lacombe’s iconic New Yorker magazine image of David Mamet writing his Oscar-nominated adapted screenplay for Wag the Dog in his cedar cabin on his farmhouse in Cabot, Vermont, in 1997. He is using an Olympic SM portable typewriter.
My American friends appear to be deeply divided over who to vote for on Tuesday week. Herman Price, no doubt, would have been keeping his fingers crossed that politics stayed out of the equation when the faithful gathered in West Virginia for the annual QWERTY Award fest this weekend - though there were some rednecks in the mix. I can empathise. With just 240 hours left until E-Day, there remains a choice between a candidate accused of making advances to young women, the unwelcome involvement of a government intelligence agency, a potential whistleblower who was knocked off and, in the background, a war - of sorts (and not all that distant from Syria). Sound familiar? 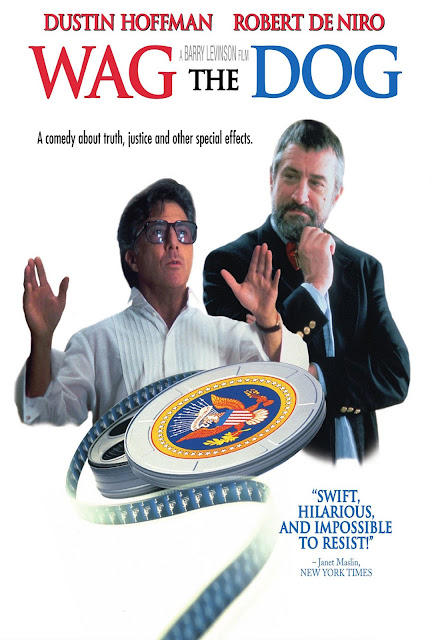 'Truth, justice and other special effects'
Yep, last night we got out the DVD of Barry Levinson’s 1997 black comedy Wag the Dog, adapted screenplay by David Mamet, and reminded ourselves that there’s really very little new in the wacky world of United States Presidential election campaigns. The movie’s 20th anniversary will be marked by the inauguration next year of the 58th US president and commander-in-chief, two full decades after the candidates came straight from Mamet’s lurid imagination. The action in the screenplay, eerily, starts 11 days out from a presidential election. OK, so Wag the Dog is heavily coated-on cynicism, but how else can one view from this considerable distance the shambles that is the showdown between Mr Trump and Madam Clinton? 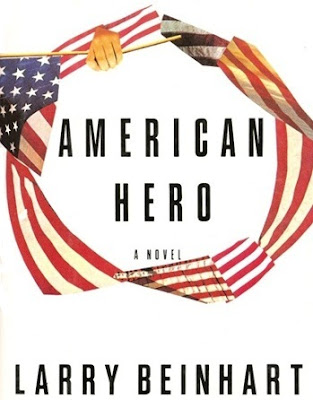 Mamet’s screenplay was an original rewrite after an earlier adaption by Hilary Henkin of Larry Beinhart's book American Hero, which came out in 1993 as a satirical conspiracy theory novel. It hypothesised that Operation Desert Storm in Kuwait in early 1991 had been scripted and choreographed as a ploy to get George H.W. Bush re-elected (taking a cue from Margaret Thatcher's similar war in the Falkland Islands). Mamet has Washington spin doctor Conrad Brean (played by Robert De Niro) set out to distract the electorate from a presidential sex scandal. Brean hires a Hollywood film producer (Stanley Motss, based squarely on Robert Evans and played brilliantly by Dustin Hoffman, a role for which Hoffman won a best actor Oscar nomination) to construct a fake war with Albania. Kirsten Dunst plays a young actress playing a supposed Albanian civilian war victim, presumably the real-life grand-daughter of the left-behind-in-Vienna Harry Lime (this is clever stuff from Mamet). The CIA gets involved, first wanting to expose the phony war then abruptly electing to end it. Wag the Dog, even more eerily, was released a month before the outbreak of the Lewinsky scandal and the subsequent bombing of the Al-Shifa pharmaceutical factory in Sudan by the Clinton administration. 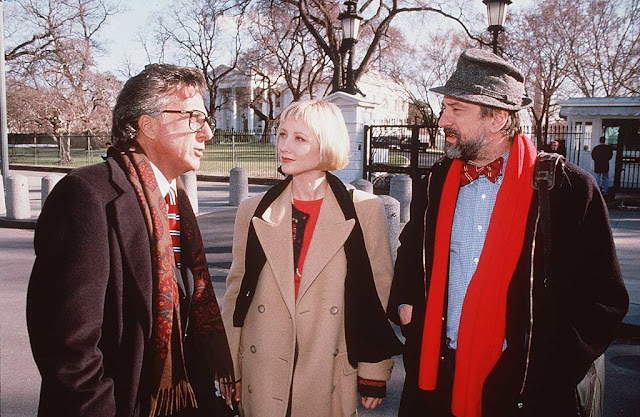 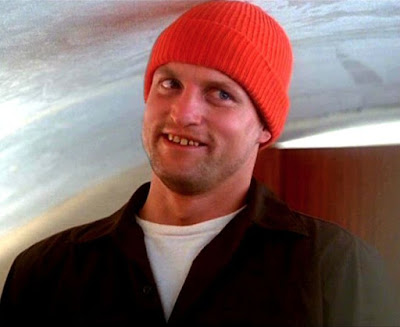 At the time of Wag the Dog’s release, Chicago Sun-Times reviewer Roger Ebert said, “The movie is a satire that contains just enough realistic ballast to be teasingly plausible; like Dr Strangelove, it makes you laugh, and then it makes you wonder.” The wondering, I’m afraid, is over. Little did Ebert know that in 2016, Wag the Dog would become frighteningly less satirical and take on a great deal more realistic ballast. It is no longer teasingly plausible, but an actual commentary on the presidential election. Oh, how clearly Mamet saw it coming! 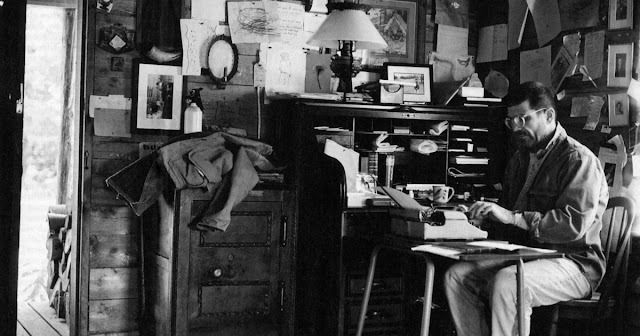 Posted by Robert Messenger at 12:55

With neither candidate fit for the office of President the movie could be more true than thought. All we can do is vote and as our money states "in God We Trust." Hillary is untrustworthy, and I doubt Donald. Never thought I'd see such a bad election. I blame a 2 party system and news liberals who refuse to cover any independent or alternative party.

It's interesting to consider how the general consensus, every voting year, is that it's the worst year ever. Among those who do not blindly follow one party or another, at the very least. The beauty of our Federal Republic is that even with a terrible president, most of the actual power to govern, and thus impact the lives of residents and the world at large, resides in the Congress, and the State and local governments. The president is, of course, the figurehead of the United States, and nowadays wields far more power than perhaps the founding fathers had intended, but in 4 years the people will have another opportunity to elect someone else. There have been good presidents, there have been mediocre presidents, and there have been terrible presidents that let half the nation secede and did nothing about it (here's looking at you, Buchanan). But no matter what the world will go on, and we're only one nation among many.

I don't blame the media, they're just doing their job as dictated by the people who own the media companies. I don't blame the two-party system, we've had that for most of our history (Albeit with Federalists and Whigs at the beginning). I blame a public that votes with their emotions, rather than their minds.

As I drove through rural Ohio, seeing about 1000 Trump signs and 5 Clinton signs, I wondered whether political acrimony would infect the typewriter lovers' reunion. But it did not, thanks in part to a big jug in which we were supposed to deposit $5 for every mention of a candidates' name, and other amounts for other political buzzword. (I believe Bernie Sanders cost $4.99.)