Little Raymond and his Simplex Typewriter 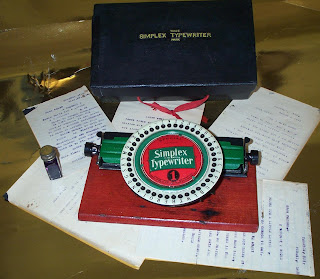 For Christmas 1913, Raymond Koessler, aged nine, of Cashton, a village in , got from Santa Claus a Simplex Special No 1 typewriter. He had mastered the use of this wonderful little machine by January 16, 1914, when he wrote to a German-speaking uncle in , 38km west of Cashton on the :
Dear Sir –
I thought I would write you a little letter. I am going to school to-morrow. We have very much fun down at school. We are going to have a sleigh next Tuesday. We have to have our wood piles before we have the wood. Ha. Sleigh ride. Mr Joellies and Mr Luck and Mr Hansen are going to take us to St Marries. I guess I will quit for this time.
Yours truly
Raymond Koessler
St Mary’s is a Catholic church on the Monroe County Highway just out of Cashton. Raymond was a good, God-fearing little soul, himself of German stock. Best still, he was blessed with a fertile imagination. He started to use his Simplex to write what he called his “About Stories”:
Once there was a little boy who was praying his morning prayer one morning – his sister came up stairs and tickled him on the feet. Then the little boy said, Wait God till I nock hell out of Susie.
Susie wasn’t Raymond’s sister, she was the figment of a bright young mind, one already well capable of composing charming little notes and letters, if occasionally lacking in spelling skills. Raymond’s sisters were Frances and Coletta. would grow up to marry a neighbour, Martin Von Ruden, and the couple would take over the farm where Raymond’s father, Anton, had lived almost all his life. Coletta would marry Joseph Stevens, and Anton moved in with them in his dying days, in early 1949.
On February 21, 1914, Raymond wrote another letter:
Dear Friend –
I thought I would write you a little letter. I went to church to day. We was just going to start out to go to church but then it rained to hard – then Mama said, We should put the horse in the barn – and Pete did. We prayed the Rosy. Papa and Pete and I were playing Rummy.
Yours truly
Raymond Koessler
Mama was Anna, nee Hauser, of , whom Anton had married in 1889. She died in 1928. They had six children, four of them sons: Frank, Peter, Joseph and Raymond. Peter, like Frances and Coletta, stayed on in Cashton, but Joe moved to Sleep Eye, .
In early March 1915, the winter had had its effect on Raymond, who became seriously ill and was confined to bed. He took some comfort in writing on his Simplex on March 9:
Dear Sir –
As I have some news to tell you I would write you a little letter. I was sick, but I am better again. I got sick last Thursday. I had the doctor twice this week. He said I had the newmonea. May be I will get up to morrow. I guess I will stop for this time.
Yours truly
Raymond Koessler
But Raymond was not better. On April 11, 1915, he wrote his last known letter:
Dear Sir –
As it is Sunday to day and I have a little time now I thought I would write a little letter to you. I was not to church this morning. Only Peter and Frances went to church. I was sick from last Thursday on.
As Raymond’s body weakened, his mind seemed to become more agile. In December 1915, with his sister Frances showing an interest in a member of the Von Ruden family, Raymond wrote an odd little note to Santa Claus, about the children who were looming as his prospective relations by marriage:
Dear Santa
Elaine wants a new rubber doll. Bob wants a testing. Chuck loves his new dress. Please bring her or him another. End of report.
I now own Raymond’s Simplex Special No 1 typewriter. I won it on an eBay auction. It came to me in almost perfect condition, except for a small ink stain on its wooden base. The paint has not worn in the least, and its black box looks almost as new as it did that 1913 Christmas Day morning when Raymond first opened it on his family’s farm in . It came with the tiny ink bottle Raymond used, and, best of all, it came with all his letters and notes. Raymond’s Simplex takes pride of place among my collection of toy typewriters, many hundreds of them dating from 1891 to the present day.
The Simplex is a unique typewriter. It was invented by Analdo Myrtle English and for 14 years was built by Philip Becker and promoted as a real typewriter. But the public wasn’t buying it, literally. It worked like a real index typewriter, it just didn’t look like a real typewriter. So in 1905 it was “re-invented” by Samuel A. Thompson as a toy typewriter, and for the next 35 years heavily marketed, especially at Christmas, with Santa advertising cards. At Christmas 1914, a British soldier used one on the Western Front, to write home saying he’d saved 7/6 and could he get some nice, warm socks. 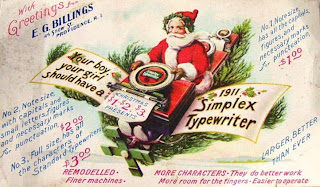 I wanted to know more about the boy who had once owned my Simplex Special No 1, this boy whose letters had foretold such a brilliant intellectual and literary future. I myself had first used a typewriter at the age Raymond was when he got his Simplex. So I contacted Jeanne Hesselberg, a photographer and writer from nearby . She kindly put me in touch with Dr Jim Brown, a Wisconsin rail historian, who passed my query on to Jarrod M. Roll, the historian at the Monroe County Local History Room and Museum in . 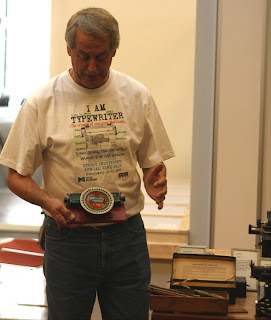 Jarrod Roll was extremely helpful, sending me details about the Koessler family and Anton’s obituary. On his advice, my story about Raymond’s typewriter was published in the Cashton Record at Christmas 2008, and through that article a living relative of Raymond’s got in touch with me. Yet all this has left me with mixed feelings about now owning Raymond’s Christmas present of 1913, and his letters. Jarrod deeply saddened me with the information that Raymond had died, in the year of the Spanish flu epidemic, 1918, aged 14.
Posted by Robert Messenger at 13:14

What a beautiful and sad story.

I know I am a bit behind but I've just discovered your beautiful blog. I have just begun my own little typewriter collection and am looking forward to catching up on your advice and wisdom over the coming months/years. I too love to type.