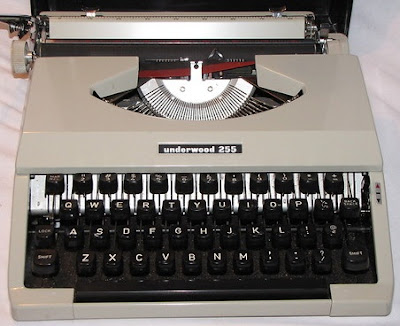 When is an Underwood portable typewriter also a Royal, an Imperial, an Adler, a Singer, a Norwood, a Silver-Reed Silverette, a Sovereign Compact, a Craftomatic and an AusRoyal (just to mention a few which spring immediately to mind)? When it’s called an Underwood 255 and it’s made by Silver-Seiko in Japan, that’s when. 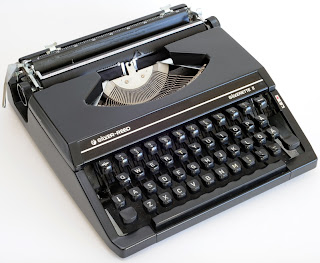 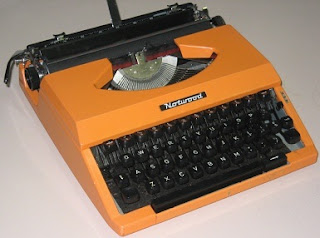 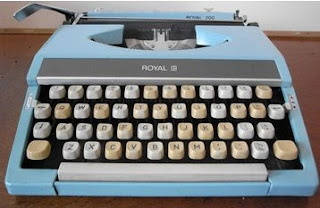 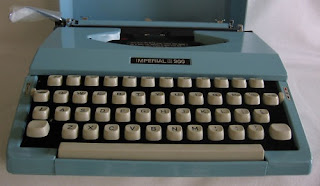 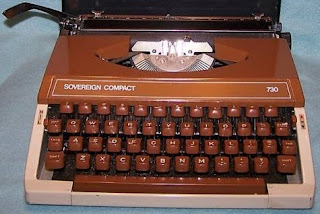 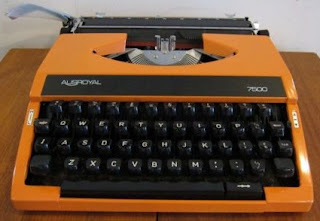 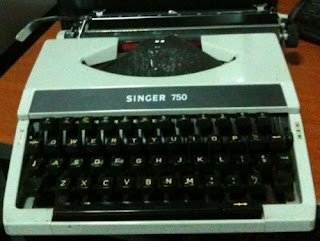 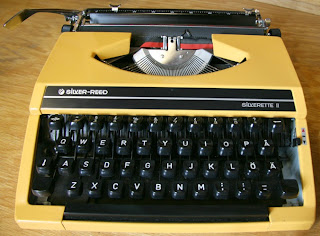 Why did this once great American brand, taken over by Italian company Olivetti, allow its name to be used on a common-or-garden, all-bran(d) Japanese design? Will Davis at the Portable Typewriter Reference Site says, “… the Underwood 250 series machines … were made in Japan by Silver-Seiko, for reasons we don't know”. So there. 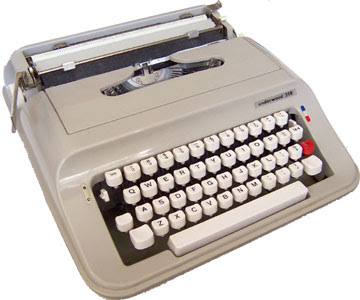 Accepted wisdom is that the Underwood 319 (above) and 378 portable typewriters stem from the Olivetti Lettera 92, dating from the mid- to late-1980s. 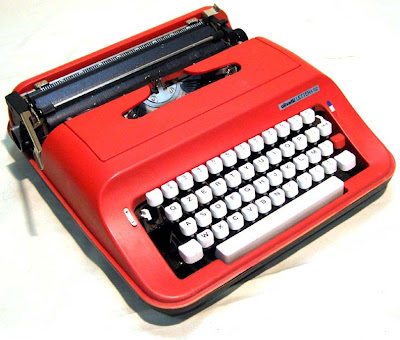 Olivetti Lettera 92: http://www.pu-casagrande.it/pg009.html
To the best of my knowledge, Olivetti wasn’t designing its own manual portable typewriters by that late stage. Indeed, the evidence suggests the Lettera 92 is an Olivetti adaptation of a Japanese Brother design – the 300T (later upgraded to the 440TR). (In fact, the idea of the swooping front goes back even further, to Japanese-made Royals and Imperials. The 440TR, by the way, uses the same tight plastic case as the Underwood 10.)
The only visible differences on the Olivetti-Underwood from the widely used Brother design are a higher back, a slightly broader lip around the casing and a squared-off ribbon cover. 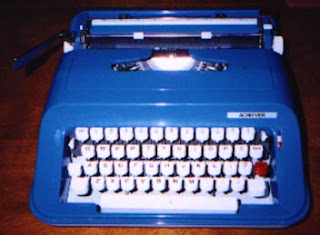 Will Davis Collection
As Will Davis himself says, the Lettera 92 belongs to a very extended family. Not just the Underwood 319-378-130, but also the Achiever (above; a Silver-Seiko model name, used by Sears Roebuck) Signature (ditto for Montgomery-Ward; the 511 is another clone, made by Brother in Nagoya), the Antares 135 (Antares having already been responsible for the Underwood 18, 19, 16 and 10), and the Pinnock, among others.

Underwood 378
Will Davis rightly adds, this “is one of the most often-seen and variously relabeled portables of modern times. There are a lot of variants of this basic machine …” 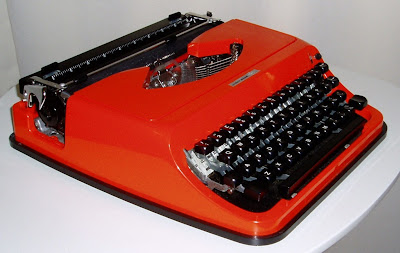 Admittedly, the Olivetti Lettera 92 and the Underwood 319 and 378 were made in Spain. Yet the similarity to the Brother 300T-440TR is inescapable. And, after all, who were still designing typewriters in the mid to late 1980? Yes, the Japanese; and few, if any, others. What I CAN confirm is that the Underwood 130 (above), along with the identical Antares 130 (below) WAS Japanese made. It is simply a relabeled Brother 300T-440TR (with the ribbon colour switch moved above the keyboard). 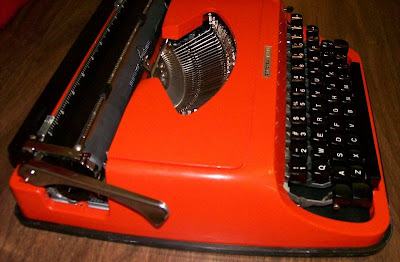 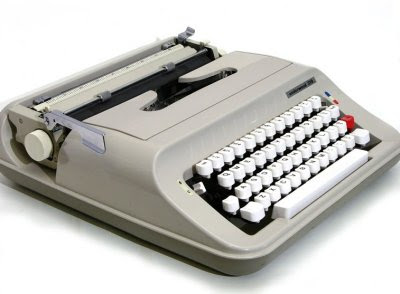 I am looking here at Underwoods I do not own. Alan Seaver on his Underwood page at his website Machines of Loving Grace http://sevenels.net/typewriters/underwoods.htm includes an Underwood 319 (above) “as a curiosity, as the '80s Underwoods have about as much relation with the original Underwood company as today's Indian motorcycles have with their famous predecessors”. 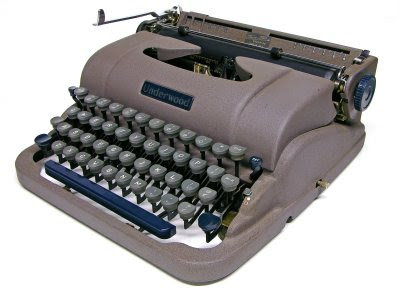 On this page, Alan has other Underwoods I would like to own (yes, I admit I would even buy one of those blue-based Underwood 378s if the prices weren’t so ridiculous). Here are a Finger-Flite Champion (above), a De Luxe Quiet Tab and a Leader (both below) from Alan’s page: 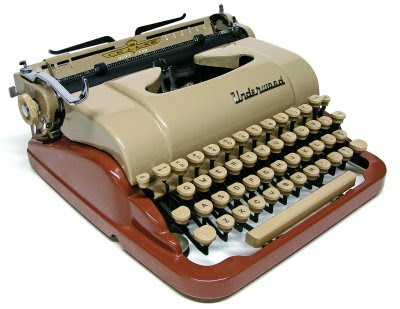 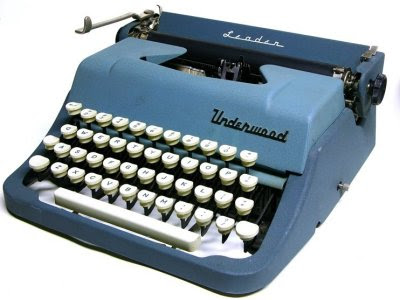 Here is one of Richard Polt’s collection, a maroon Underwood Noiseless. 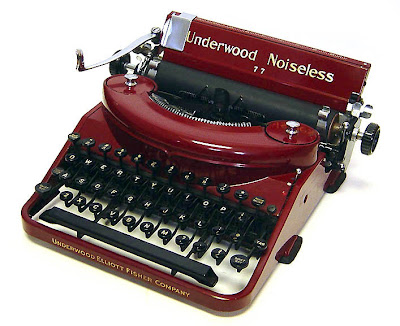 Richard and I once bid against each other for a black and cream Underwood De Luxe Quiet Tab, but I dipped out: 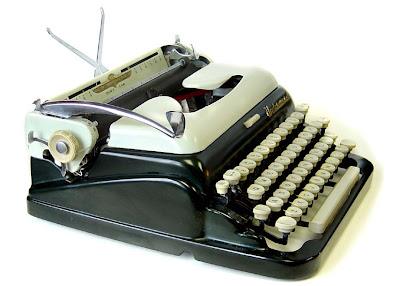 I’ve never had the chance to own an Underwood Junior. Scott McNeill has one for sale at $US495 at the Vintage Typewriter Shoppe (below), but the Australian dollar has just slipped behind the US dollar once more. The Underwood Junior and a Remette would just about complete my collection of this Depression Era typewriter. 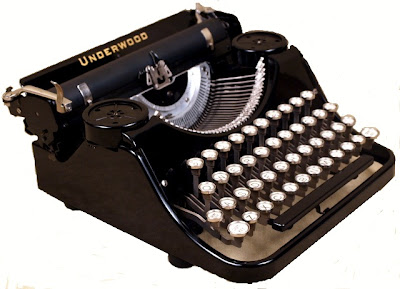 I like it that on Richard Polt’s The Classic Typewriter Page, he adds to his collection the machines which are “gone but not forgotten”. These are some Underwoods I once owned, and, like Richard, I shall not forget them in a hurry: 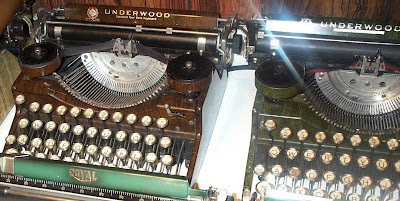 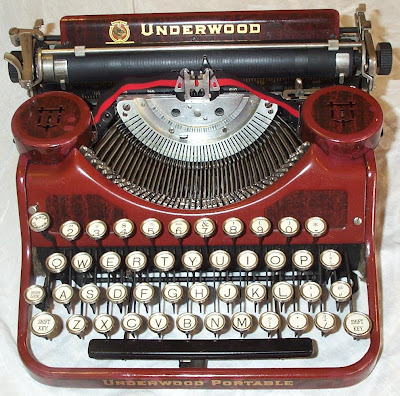 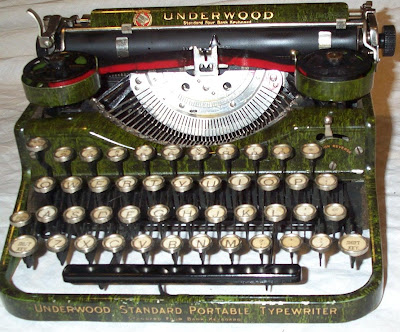 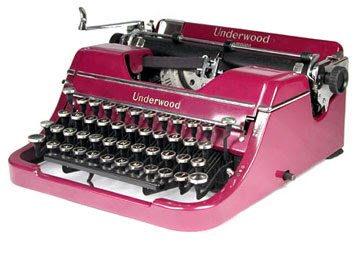 TOMORROW: Excerpts from manuals for the Underwood 3 and 4, the Noiseless, the Universal, the Golden Touch, the De Luxe Quiet Tab, the 18 and the 21.
Posted by Robert Messenger at 22:10

Once again, very nice, very well done. I totally enjoy this series. Thank you for doing it.

Here's a couple other bits of Underwood Ephemera for your enjoyment:
1952 Underwood Finger-Flite Champion user manual.
1957 Underwood Golden Touch Deluxe user manual.
The History of The Typewriter by Underwood, 1950.

Yet the 319 (I like it, but strikethru hated it), has an Olivetti feel to the action - not Japanese or Brothery at all. They adapted the design and still got an Olivetti out of it. It's butt-ugly though, as we say over here.
I have a couple of leaders if you want to work a trade...

I believe my
http://maschinengeschrieben.blogspot.com/2011/10/collection-royal-signet.html
Royal Signet belongs to this family, too, although it lacks the colour change feature.

You are probably already there, if not there's a 3 bank manual here on Georg's site but which oddly came with one of my 4 banks.

I'm feeling all Underwooded-out now. A great and informative potted history - thanks.

Regarding the Underwood 319/378 - I have a 378, and a lettera 32, and a Lettera 33, and a Lettera 31, and they all share the same mechanism. No reason for Olivetti to borrow a Japanese design to make the 92, when all they had to do was re-skin the existing design, a much cheaper alternative to adapting another company's design. The 255 is of course pure badge engineering, and has nothing of Underwood or olivetti about it.

I learned a lot reading this and I love it, my girlfriend loves so much to write and I would love to buy her a typewriter. When I saw the old, red one, the one that looks London-ish, I thought what an amazing gift it would be for her. Does anybody know where I could buy one like this?