Shame Games: The St Louis Olympics and the Human Zoo 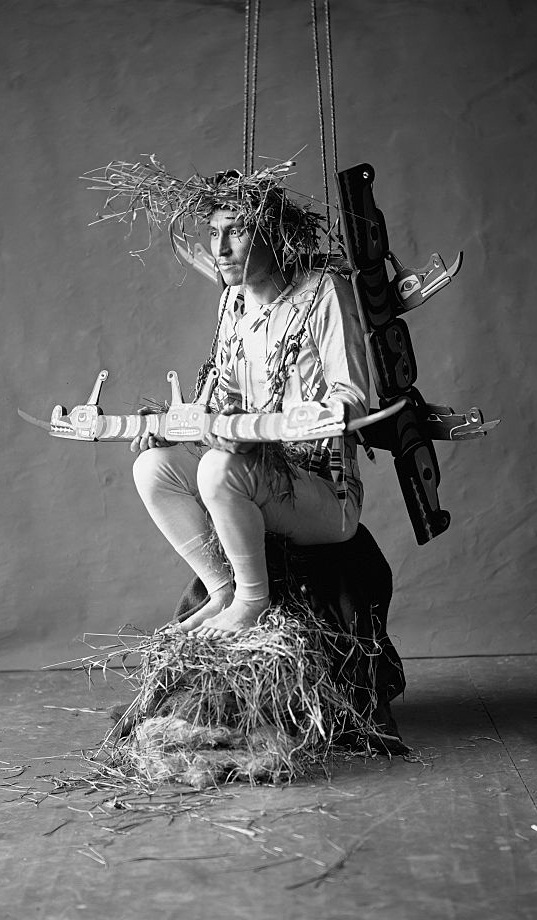 Exhibited for the benefit of fairgoers: 34-year-old Da´naxda´xw (New Vancouver Tribe) carver Bob Harris (Xi´xa´niyus), an initiated Hamaťsa Dancer, in the Human Zoo at the 1904 Louisiana Purchase Exposition in St Louis. Below, Geronimo (1829-1909), leader from the Bedonkohe band of the Chiricahua Apache tribe. 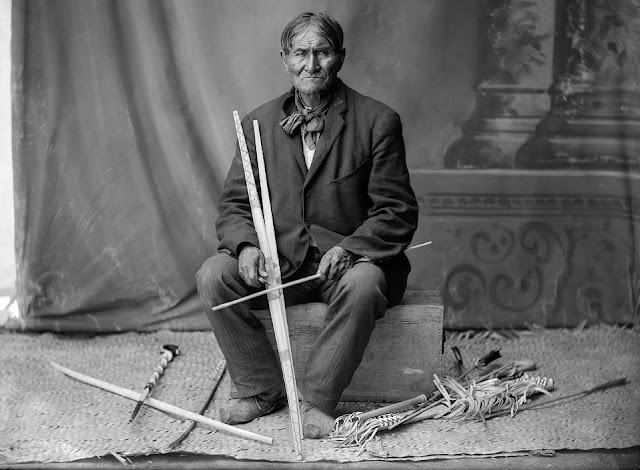 VER the next two weeks, much will be written and said about past Olympic Games. One of the previous 30 summer celebrations in the Modern Olympics era will not, however, be mentioned - the utterly shameful 1904 Games held in St Louis, as part of the centenary celebrations of the Louisiana Purchase. Louisiana was actually acquired from France (for $15 million) when a treaty was signed in Paris on April 30, 1803. Missouri was part of Spanish Louisiana until then. That the St Louis World’s Fair did not start until the 101st anniversary of the Paris settlement says plenty about the Missouri’s unpropitious organisation of the Olympics. 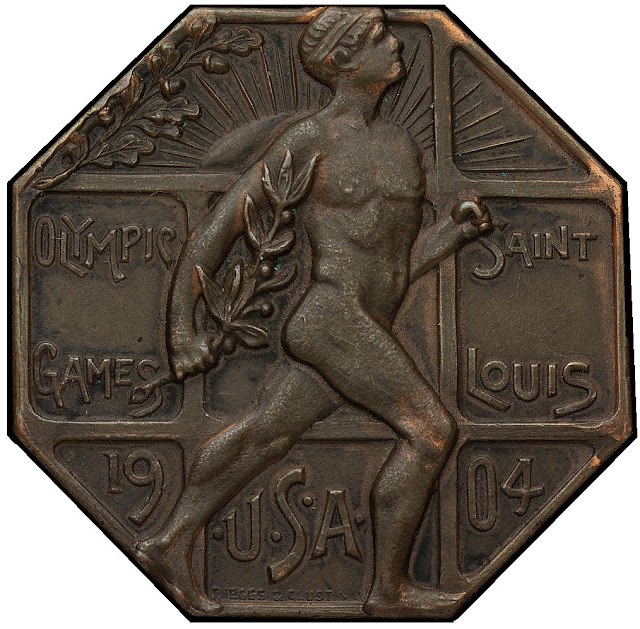 Among the seven “Fundamental Principles of Olympism” that open the Olympic Charter, the International Olympic Committee’s position on racism is spelt out. Principle six says, “The enjoyment of the rights and freedoms set forth in this Olympic Charter shall be secured without discrimination of any kind, such as race, colour, sex, sexual orientation, language, religion, political or other opinion, national or social origin, property, birth or other status.” It wasn’t always so. The farcical 1904 Games stand as the worst example of racial prejudice and “the most distasteful aspects” of Olympic history. 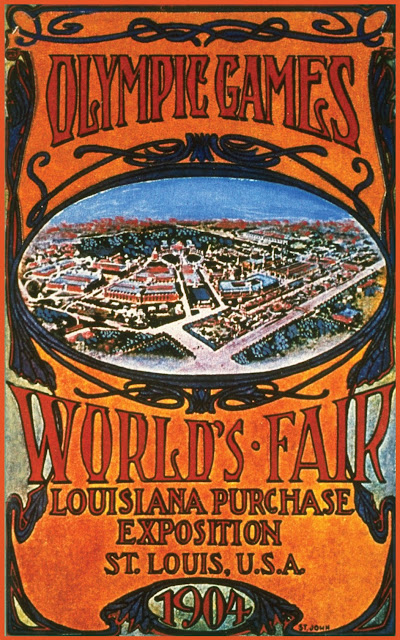 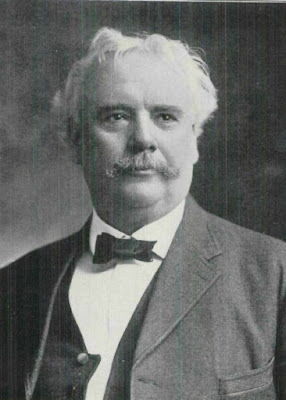 The St Louis Olympics made use for “sport” a human zoo which had been put together for the World’s Fair by American anthropologist and ethnologist William John McGee (above, 1853-1912). McGee and Games director James Edward Sullivan (below, 1862-1914) arranged for “Anthropological Days at the World’s Fair … the First Series of Athletic Contests ever held, in which Savage Tribes were the Exclusive Contestants.” Sullivan, a founder of the Amateur Athletic Union in 1888, was its secretary from 1889-1906 and president from 1906-09. 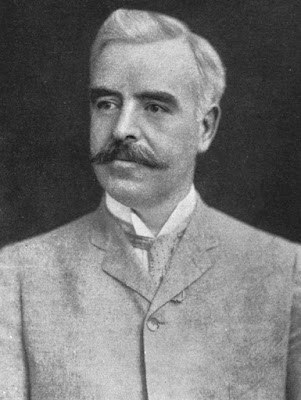 McGee’s Human Zoo comprised “exotic” people, premature babies and schools of “defectives” from around the world. They were classified according to their “stage of development” and referred to as “the primitives”. They included Native Americans, Patagonians (Tehuelche), Ainu from Japan, Cocopás from Mexico, Turks and pygmies from the then Belgian Congo. Sioux children attended a model school where they demonstrated how well they learned “civilised ways”. More than 1000 Filipinos were grouped according to ethnicity and religion – Christian Visayans, Mohammedan Moro and Bagabos. Classed as “savages” were Negrito and Igorots (Cordillerans). 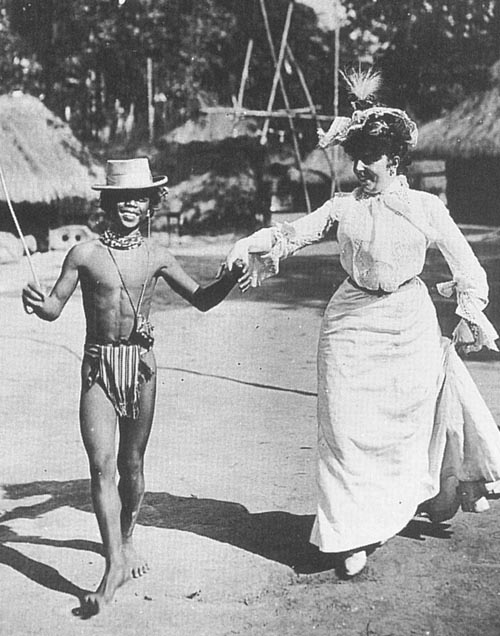 Dancing with an Igorot.
Fairgoers had photographs taken with the “savages” and watched the Igorots kill and cook dogs. Science and entertainment emerged in the baby incubator exhibits, where paying customers watched premature infants fighting for their lives. Newspaper advertisements said, “See the mites of humanity whose lives are being preserved by this wonderful method.” After viewing the “feeble human creatures”, visitors could buy souvenir baby-shaped soap and have lunch at the Incubator Café. All the fun of the American fair, as they say … 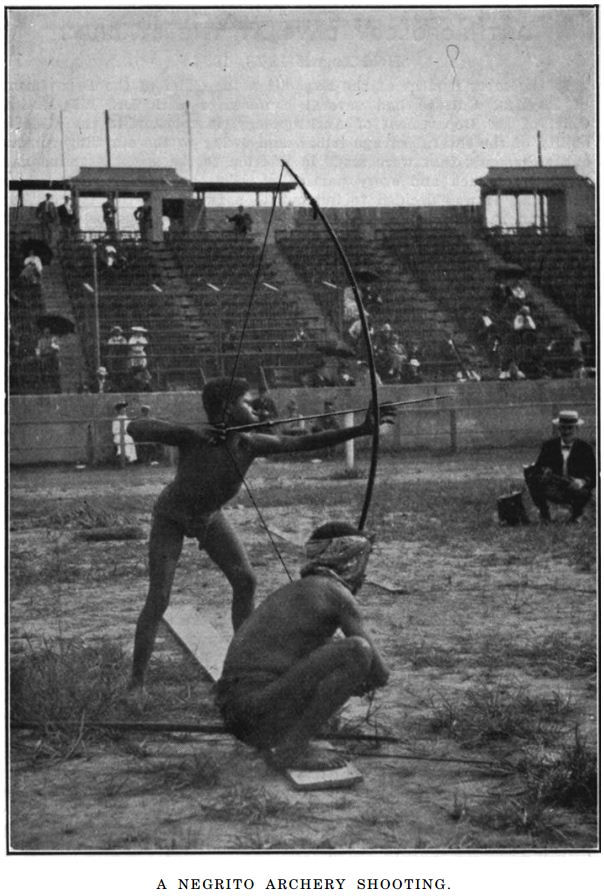 In “sport”, the “Anthropological Days” of August 12-13, 1904, came to be called the “Savage Games”. They included races over 100 yards, the quarter mile and mile, hurdles, shot put, javelin, bolos (“Patagonians only”), long and high jumps, archery, baseball, tug-of-war and pole climbing. 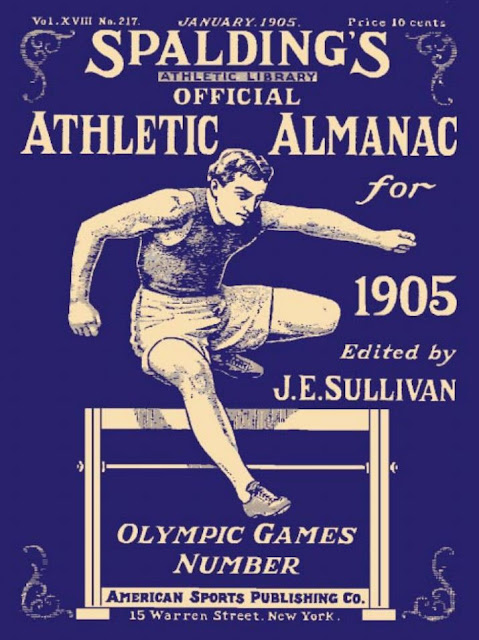 Sullivan included them in his Olympic report in the January 1905 issue of Spalding’s Official Athletic Almanac: Olympic Games Number, the most complete original record of the 1904 Games (the Lucas Report covers just track and field events). He wrote that the Savage Games were “wisely” staged at a time when “many physical directors and gentlemen interested in scientific work could be present and benefit by the demonstrations. Scientific men will refer to [the events] for many years to come. [They] taught a great lesson. Lecturers and authors will in future omit all reference to the natural athletic ability of the savage, unless they can substantiate their alleged feats.” 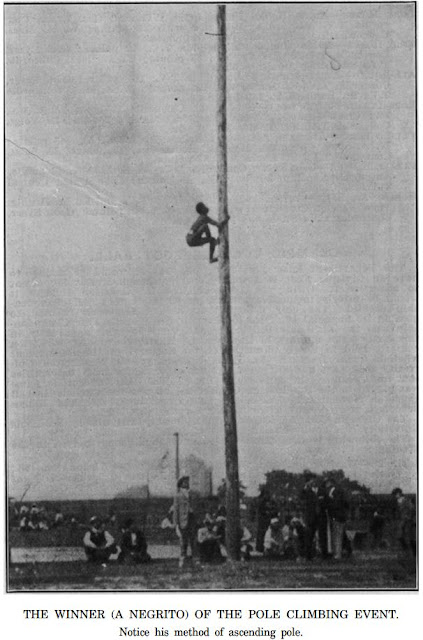 Yes, Sullivan used, abused and then rounded on the inhabitants of the Human Zoo – for falling well short of expectations. The mere fact that none of these unfortunate people had ever played or prepared for any sort of organised sporting contests seemed to be beyond his comprehension, limited as it obviously was. Sullivan wrote, “We have for years been led to believe … that the average savage was fleet of foot, strong of limb, accurate with bow and arrow and expert in throwing the stone. The whole meeting proved conclusively that the savage has been a very much overrated man from an athletic point of view.”

Subsequent events, at these very same St Louis Olympic Games, were to show just how wrong he was! 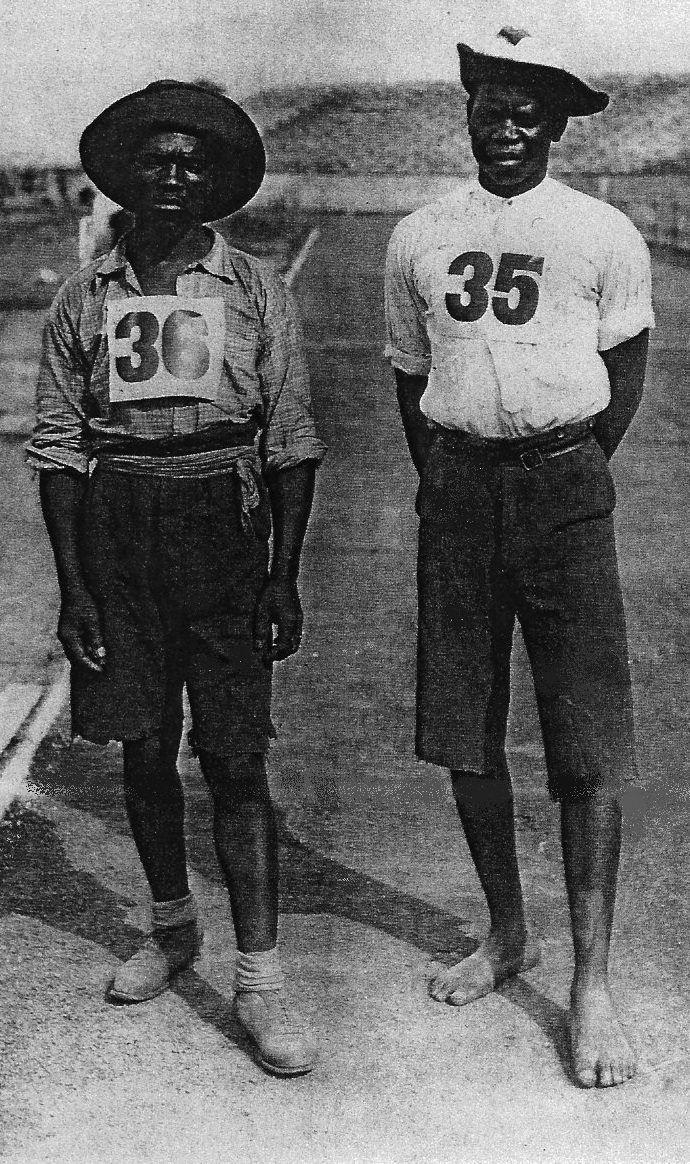 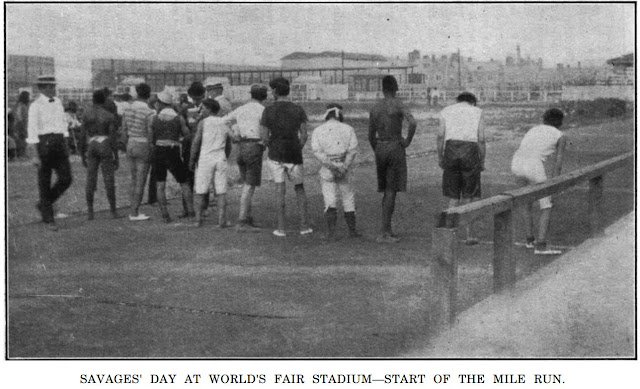 Just 17 days after the Savage Games, Len Taunyane (called Lehouw, and a Zulu and “Kaffir” by Sullivan) finished ninth in the marathon in the Olympics proper – even after losing eight minutes from being chased off the course by a dog. And this was without any training whatsoever for such a gruelling event. Tau, a Tswana tribesman who was part of a Boer War re-enactment assembled for the Human Zoo, had finished third behind “Americanized Indian” Black White Bear and Turk Yousouf Hana in the much less exacting mile race in the Savage Games. 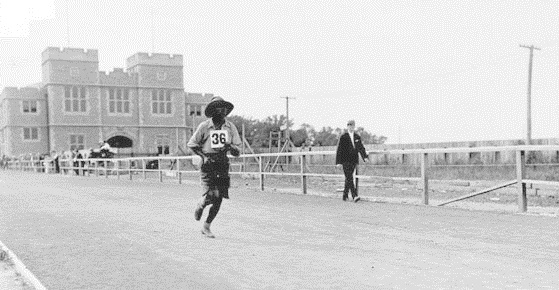 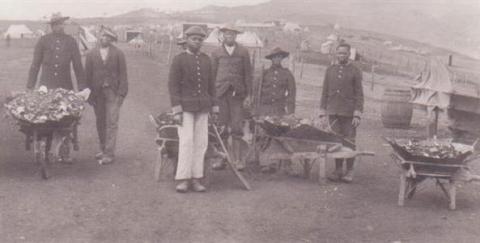 Len Taunyane, second rom left, as a Boer Prisoner of War on St Helena.
Tau, who had been a Boer prisoner of war in real life, and fellow Tswana tribesman Jan Mashiana, who also ran in the marathon in the real St Louis Games (he was 12th among the 14 who completed the course)), were two of the first black Africans to compete in the Olympics. Their efforts in the 26-mile race were extraordinary, but a non-white African winner of the Olympic marathon did not emerge until Algerian Ahmed Boughèra El Ouafi won for France in Amsterdam in 1928. Modern Olympics founder Pierre de Coubertin was not, happily for him, in St Louis to witness the Games descend to their lowest level. But he warned the disgraceful “Savage Games” would lose their appeal “when black men, red men and yellow men learn to run, jump and throw and leave the white men behind them”. At least that was in part prophetic. 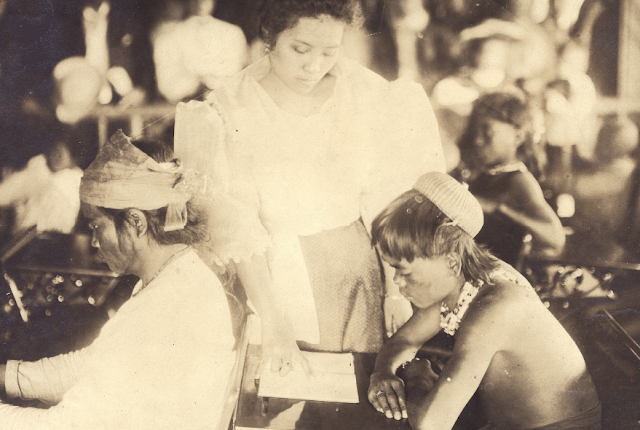 Sad commentary for the way humans treated other humans. Has it really gotten any better?

Fascinating, and all new to me.