Alpina Typewriters: Getting Greedy, Not Wise 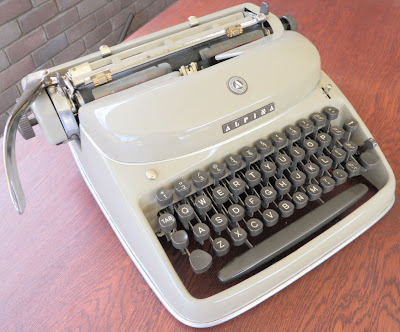 I must be getting old: I thought that Rod Bowker had commented that the price of Alpinas would skyrocket after I posted on my two on November 2. Rob was actually referring to the Facit, from an earlier post. 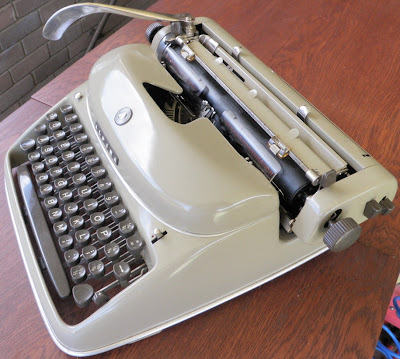 Anyway, I was going to say, based on Rob's comment, that typewriter buyers in Australia can't be reading me, because soon after my Alpinas post, another Alpina - only the second I have ever seen listed on Australian eBay - came up for sale. I considered it a snip at a starting price of a mere $40, and fully expected the bidding to get furious.

It didn't. I was the only bidder!

So now I'm feeling quite greedy. But the good news is that my third Alpina is already being put to good use. My son, Danny, 23, has started to type on it to do some "serious" writing, one of those zombie apocalypse novels, I believe - though he has been doing some very heavy reading (Homer, Milton and Conrad) of late. 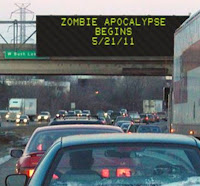 (PS: Did you know that in the US, the weather bureau uses zombie apocalypse warnings to get some people to pay attention to severe storm warnings?). 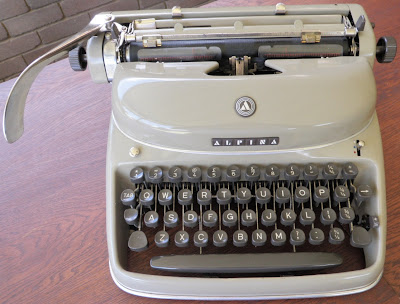 What's more, I believe this is the colour Alpina that Adwoa might have been referring to when she said she passed on a "Viking Grey" model at a thrift store back in January. Viking Grey, as in the previously mentioned Facit. 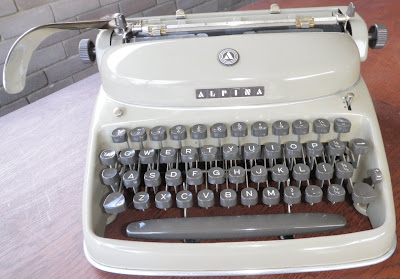 (This may strike one as another piece of useless information, but Miss Ghana, Stephanie Adwoa Adjeiwaa Karikari,shared the Beauty With A Purpose prize at the Miss World pageant in London last week. What exactly is "beauty with a purpose", I wonder? Typewriter collecting? Now there's a sound purpose in life!)

With Richard Polt having commented that he sold his AMC-Alpina (Oh, how could he part with that dreamy, milky white nylon lever!) and bought an earlier model in metallic green (the same paintwork as my first Alpina) I'm also feeling somewhat guilty. Paul Robert advised me many years ago to do exactly as Richard has done: by all means buy a better model, but at the same time sell the one you already own.

I just can't bring myself to do it! Sorry.

There's nothing like being in the middle of typewriter finding streak. Congrats on being the only man in Australia interested in Alpinae. Or is it Alpinas? Regardless, wonderful typewriters!

Congrats, Robert! I bid on that machine, but stupidly, I did it using my iPod Touch. When I thought I had 30 secs to go, my iPod brought me to the eBay screen which would show that I was the leading bidder. Instead, all I saw was the screen which stated "auction has ended". It would seem that my iPod has a different conception of what 30 seconds means.
Ahh well...
Congratulations again on a beautiful machine. And if it's being used to write a zombie apocalypse story, then it's being put to good use.

Robert, that is exactly the color scheme I meant when I mentioned passing up a Viking Grey Alpina in January. Your pictures make it look so good that I am kicking myself all over again... Then again, perhaps it looks better when surrounded by the other two :-) They are all so beautiful I don't blame you for not wanting to give any up! I wouldn't either; I also find it hard to part with perfectly functioning typewriters.

I laughed out loud at the tidbit of information about Miss Ghana - thanks for sharing that! That is hilarious. Not sure if you have come upon it in your searches, but "Adwoa" is a fairly common female name in Ghana because it means "born on Monday". Which is why Miss Ghana is called Adwoa too :)

They're great machines. If I had more space I probably would have kept both!