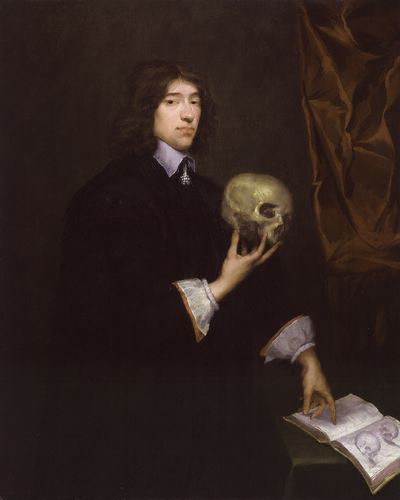 Quite a few typewriter history books and essays, most notably Wilf Beeching's Century of the Typewriter (1974, above) and Darren Wershler-Henry's The Iron Whim: A Fragmented History of Typewriting (2005), point to a mid-17th century invention as a precursor of the typewriter. Indeed, on this subject, Wershler-Henry refers to Beeching, whose work, sadly, does not include references. Scrutiny clearly shows, however, that Beeching's haphazard research relied in large part on the 1895 biography of Sir William Petty by one of Petty's descendants, British politician, historian and playwright Lord Edmond George Fitzmaurice (1846-1935).
As well as writing The Life of Sir William Petty, 1623-1687 - Chiefly Derived from Private Documents Hitherto Unpublished, Baron Fitzmaurice also, in 1901, contributed the entry on Petty to the Dictionary of National Biography, 1885-1900, Volume 45, upon which Petty's Wikipedia entry is in some part based.
What Fitzmaurice wrote about Petty's invention - the Instrumentum Pettii -  is this: 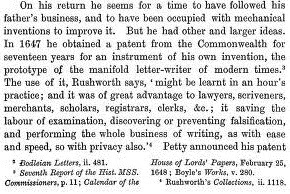 Samuel Hartlib (c1600-62), a German-British polymath, was one of the "great 17th-century 'intelligencers'" and a man of science who "set out to record all human knowledge and make it universally available for the education of all mankind". In a letter to Irish-born natural philosopher, chemist, physicist and inventor Robert Boyle (1627-91), on August 10, 1658, (The Works of the Honourable Robert Boyle) Hartlib wrote, "I am told here, that Dr Petty hath a commodious way of printing, called Instrumentum Pettii, very convenient to carry about, and to print in travelling some few sheets of paper, if occasion present itself." Earlier, in 1647, Hartlib had written to Boyle:

Beeching's claim that this patent was granted by Charles I is patently incorrect. Fitzmaurice states the patent was obtained from the Commonwealth. At the time, Charles had been on the run for two years, since the Battle of Naseby on June 14, 1645. Disguised as a servant, he had escaped from the Siege of Oxford in April 1646 and had put himself into the hands of the Scottish Presbyterian army besieging Newark, and was taken to Newcastle upon Tyne. The Scots delivered Charles to the parliamentary commissioners in January 1647 and he was held under house arrest at Holdenby House in Northamptonshire, later being transferred to Oatlands and Hampton Court, and being finally confined in Carisbrooke Castle. So no patent issuing from him! 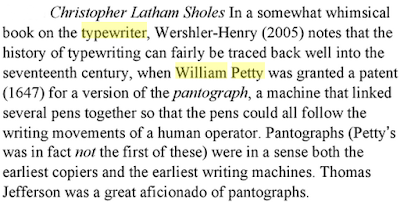 Language, Technology, and Society, by Richard Sproat (2010)
Werschler-Henry does not go so far as the duplicate Beeching's mistake on this, though he does unfaithfully (and without acknowledgement) quote John Rushworth from Fitzmaurice's biography of Petty. Rushworth (c1612-90) was an English lawyer, historian and politician who sat in the House of Commons at various times between 1657-85. He compiled a series of works covering the English Civil Wars throughout the 17th century called Historical Collections (also known as the Rushworth Papers), to which Fitzmaurice refers.
Wershler-Henry wrote: 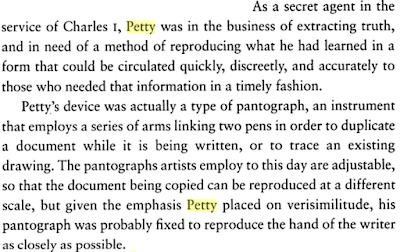 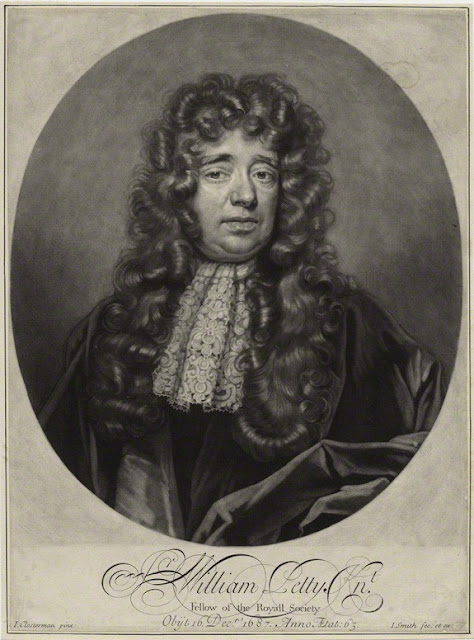 As for Beeching's claim that Petty was "a Secret Service agent in Ireland", and Wershler-Henry's that he was a "secret agent in the service of Charles I", let's look more closely at Fitzmaurice's DNB entry. There we find that, quite to the contrary, Petty worked for Oliver Cromwell and the Commonwealth, and was in fact "the bearer of secret despatches between Henry Cromwell in Ireland and Richard Cromwell, Secretary Thurloe, Lord Fauconberg, General Fleetwood, and others in England". And that was not until long after the Instrumentum Pettii had been invented and discarded. Fitzmaurice recorded: 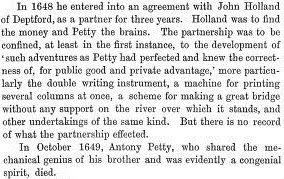 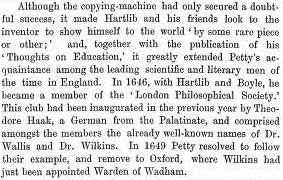 William Petty, most famous as a political economist, was born at Romsey in Hampshire on May 26, 1623. As a child he showed a marked taste for mathematics and applied mechanics. "His principal amusement," according to his friend John Aubrey, was "to look on the artificers, [for example] smyths [blacksmiths], the watchmakers, carpenters, joiners etc; and at 12-years-old he could have worked at any of these trades".
Petty studied at the Jesuit College at Caen and became an accomplished French linguist. At the outbreak of the English civil war he returned to the continent and studied at Utrecht and Amsterdam, and matriculated as a student of medicine at Leyden on May 26, 1644. Petty moved to Paris and joined the coterie which met at the house of Father Mersenne, the mathematician. On his return to England in 1646, for a time he took up his father's business as a clothier, but settled in Oxford,where he took a doctorate in physics in 1649. On the reorganisation of the university by the Commonwealth, Petty was appointed a fellow of Brasenose and in 1651 he became professor of anatomy, "having ... obtained a wide reputation by reviving the supposed corpse of one Ann Green, who had been hanged for murder and pronounced dead by the sheriff". 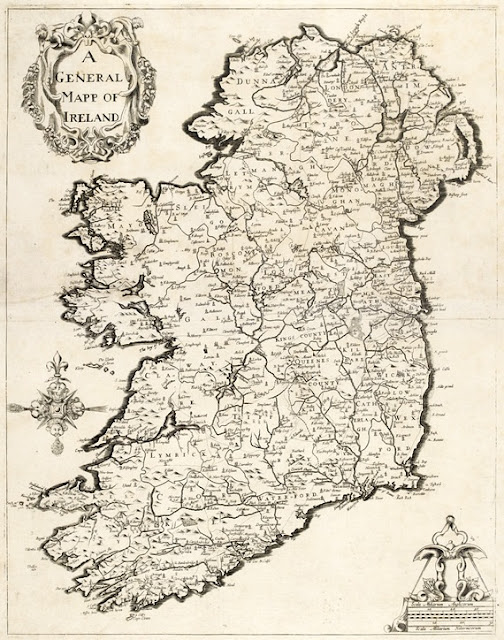 In 1652 Petty was appointed physician-general to the English army in Ireland. He undertook to make a complete map of the whole of Ireland; when printed in Amsterdam, it was declared the most exact map of the kind which had to that time appeared.
Following the fall of the Cromwellian party, Petty readily acquiesced in the Restoration. Charles II extended a willing welcome to Petty, even though Petty refused to abandon or disown his connection with the Cromwell family. On the occasion of the first incorporation of the Royal Society (April 22, 1662), of which he was one of the original members, Petty was knighted. Petty contributed several scientific papers, mainly relating to applied mechanics and practical inventions, to the "Philosophical Transactions" of the Royal Society. He devised a new kind of land carriage; with Sir William Spragge he tried to fix an engine with propelling power in a ship; he invented "a wheel to ride upon"; and constructed a double-keeled vessel which was to be able to cross the Irish Channel and defy wind and tide.
Petty died on December 16, 1687, in London, aged 64. He had made significant contributions to the theoretical issues which have dominated the later subject of economics ever since. Proving his claims by finding data and statistics, rather than relying on anecdotal evidence, he influenced not only immediate successors such as Richard Cantillon but also some of the greatest minds in economics, including Adam Smith, Karl Marx and John Maynard Keynes. 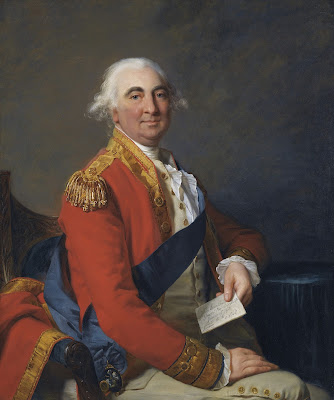 Petty's great-grandson, William Petty-Fitzmaurice, 1st Marquess of Lansdowne (1737-1805), known as the Earl of Shelburne, was an Irish-born British Whig statesman who was the first Home Secretary in 1782 and then British Prime Minister from 1782–83,  during the final months of the American War of Independence. He succeeded in securing peace with America and this feat remains his most notable legacy.
Posted by Robert Messenger at 00:03