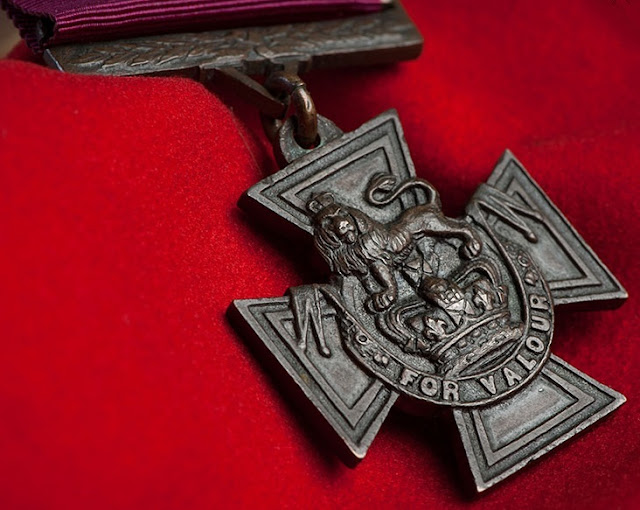 One of the Victoria Crosses awarded to Sam Mitchell for gallantry in the Tauranga Campaign of New Zealand's Māori Wars is in the West Coast Historical Museum in Hokitika; the other was last known to be in the hands of an Auckland collector. But this is no VC and Bar story. Sam Mitchell was awarded one VC (the first ever presented in Australia, the 300th awarded anywhere), for his actions in the British humiliation at the Battle of Gate Pā on April 29, 1864. So one of the two VCs in existence is a forgery, and although the one in Hokitika seems most likely to be the Real McCoy, there can be no absolute certainty on this matter. 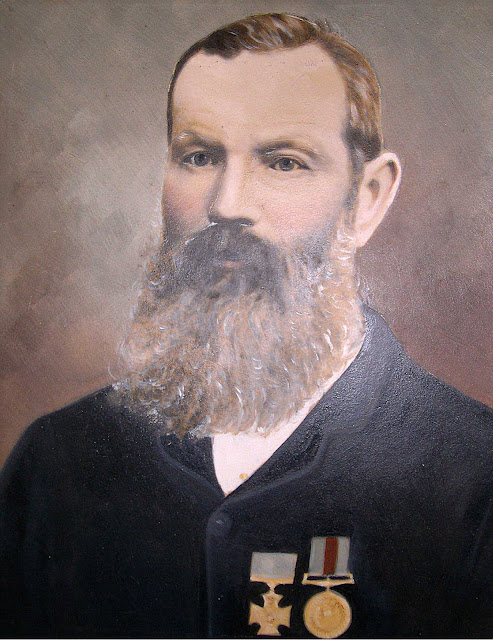 A painting of Sam Mitchell wearing his New Zealand Medal. 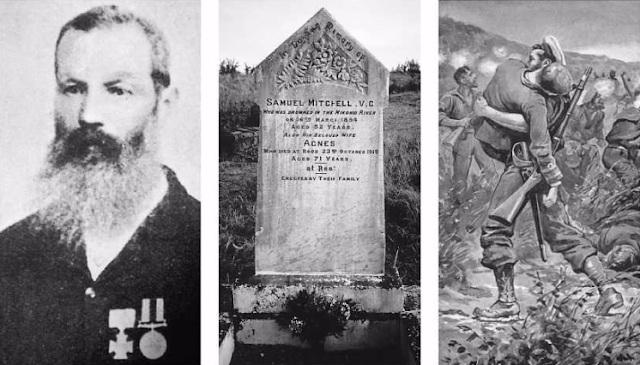 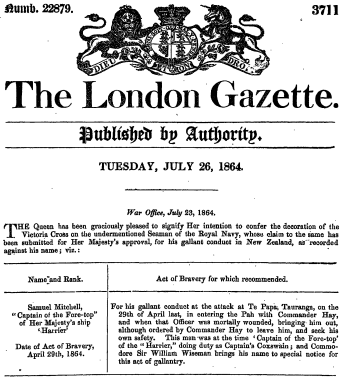 The confidence West Coasters may feel about the Mitchell VC in Hokitika being the genuine article is perhaps in large part based on a letter Sam Mitchell’s daughter, Edith Mitchell, received in Mikonui, south of Hokitika, in 1957, from Captain Peter Wyatt, commanding officer of the Royal Navy’s School of Aircraft Direction and Meteorology at Kete in Pembrokeshire. This school was the latter-day HMS Harrier, bearing the same name as the sloop-of-war upon which Sam Mitchell had served in New Zealand in 1864.

Soon after taking up his position at Kete, Wyatt (left) had been approached by the Canadian family of a 12-year-old boy, Wayne Burton, who had found the second Mitchell VC buried in sand and driftwood under a wharf at Kitsilano Beach in Vancouver, British Columbia, in August 1956. The family had sent Wyatt photographs of this Mitchell VC, hoping to get it authenticated. Wyatt, in turn, had immediately offered to buy this second Mitchell VC from the Burtons.
Before the transaction took place, however, Wyatt also received a letter from Edith Mitchell, who had read Canadian Press stories about the Burton find. Edith also sent Wyatt photographs of the Hokitika VC. Wyatt took both sets of photos to a Mr Dawes at Hancocks of London, casters of the VC (“probably the most knowledgeable man on the subject alive today”). The two VCs are identically inscribed, but based on photographic evidence alone, Dawes told Wyatt the Hokitika VC was the “true one” and the Canadian VC was a counterfeit. The two VCs have never been compared in reality, but the Canadian version has been described as more worn.
Could it be that the original VC finished up in Vancouver BC, where the man who bought it at auction in 1909 had his will resealed in 1938? Or that the VC sold to Mitchell's daughter in 1928 by this owner's son was a forgery? We shall never know.
Both VCs were eventually recovered from overseas and reached New Zealand - the one in Hokitika was bought by Edith Mitchell for £70 from British diplomat Alvary Trench-Gascoigne, the son of a wealthy English collector who had bought it at auction in London in 1909, the other in 1995 by the Auckland collector, who had bought the Canadian VC at auction in London.

A drawing of Mitchell as a young man. 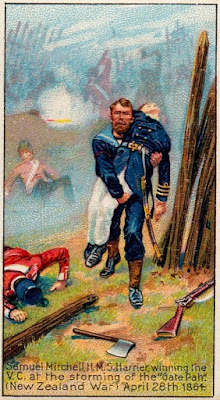 Mitchell, born at Apsley Guise, Woburn in Bedfordshire on September 8, 1841, drowned in the Mikonui River, close to his farm south of Ross, on March 16, 1894, aged 52, still wondering what had happened to his original VC. He had returned to Sydney from England in 1865 and left the VC with other belongings at a boarding house in Sydney, when he went on to New Zealand in late 1868 to decide whether to settle there. Mitchell did opt to spend the rest of his life on the West Coast, and sent word to a couple believed to be called Goodman, owners of the boarding house, asking them to send his sea chest, including the VC, to New Zealand. He heard nothing back, and contacted police. He was told the Goodmans had returned to England. The prevailing presumption is that they took Mitchell’s VC with them, and sold it to a collector. 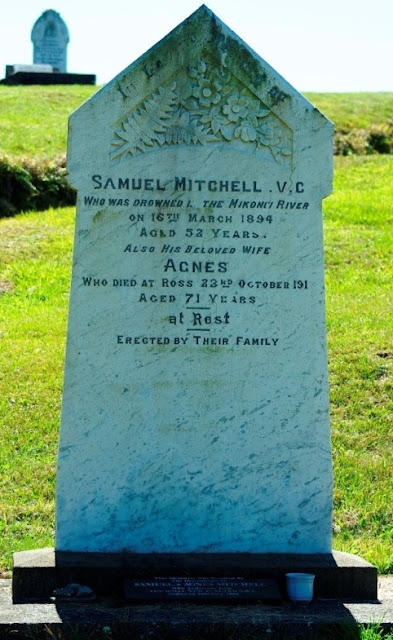 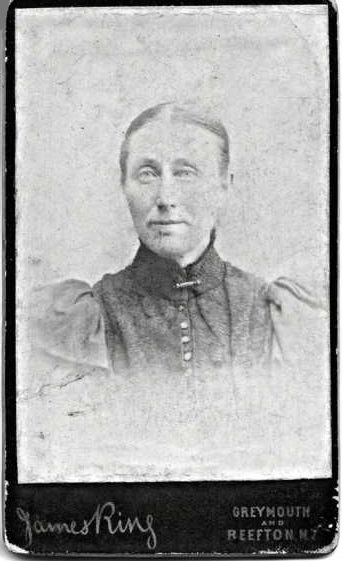 Agnes Mitchell
Mitchell's VC was next heard of in early January 1909, when New Zealand newspapers reported that it had been sold at auction for £50 by Glendining’s Galleries in London. Sam's widow, Agnes, contacted Walter Dinnie, the then Commissioner of Police in Wellington, who advised that the VC had been sold to colliery owner Colonel Frederick Trench-Gascoigne DSO of Lotherton Hall, Aberford, just east of Leeds, Yorkshire. Glendining’s had got it from the executors of the estate of a collector in Bradford. 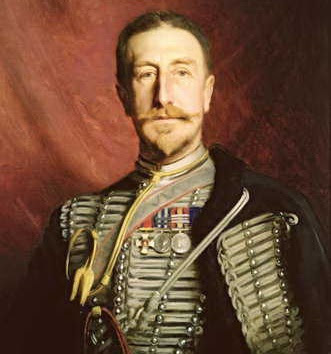 Frederick Trench-Gascoigne, above, and Lotherton Hall below.

Agnes maintained her efforts to have the VC returned, and after she died in 1918 her daughter Edith took up the cause. Between them they wrote to MPs, Government Ministers, Governors-General, High Commissioners, Returned Servicemen’s Associations, the British Empire Service League in London and British Freemasons. All to no avail, until on March 11, 1927, when the Duke of York (the future King George VI) visited the West Coast and Westland MP Tom Seddon (with whom the duke stayed in Greymouth) pressed the royal to intercede on the Mitchell family’s behalf. 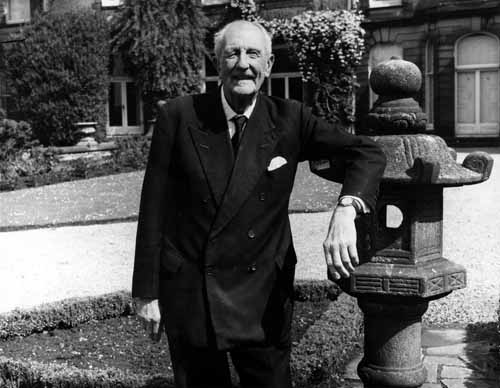 Sir Alvary Trench-Gascoigne at Lotherton Hall.
Duly, in June 1928, Edith Mitchell wrote to Colonel Trench-Gascoigne, who said he had sold the Mitchell VC to his son, Alvary (later Sir Alvary Trench-Gascoigne), a diplomat who lived in Barkston Ash, West Yorkshire. Through public subscription, Edith raised the asking price of £70, forwarded it to the New Zealand High Commissioner in London, Sir James Parr, and in August 1928 the VC finally reached Mikonui. When Edith died in 1963, the VC was gifted in trust to the Hokitika Museum.
The Trench-Gascoignes hardly needed Hokitika's £70 - when Frederick died in June 1937, he left £688,976 12 shillings and 2 pence to Alvary and his widow. Intriguingly, his will was resealed in Vancouver, British Columbia, in April 1938. We know not why. But does that explain how the other Mitchell VC turned up in Vancouver, one must wonder? 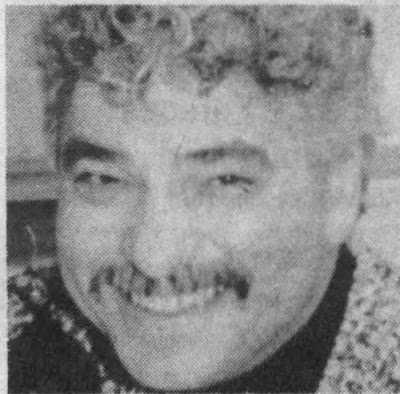 Wayne Burton in 1992
The existence of the second Mitchell VC came to light while Edith was still alive, in August 1956. Canadian Press reported that 12-year-old Wayne Burton, of Nanaimo, had found it while hiding from friends under a wharf at Kitsilano Beach. The second of two Canadian Press stories on the find, in March 1957, mentioned Captain Wyatt and his offer to buy this VC, presumably for HMS Harrier. Edith wrote to Wyatt about this story, and in a reply in October 1957 was told “Mr Dawes [stated] with more decision than I expected from such wary people that yours was the true one, and that found in Vancouver a certain counterfeit.”

Nanaimo Daily News, British Columbia, August 30, 1956, and March 15, 1957.
The story can’t end there, of course. Dawes’ certainty was formed from viewing photographs, nothing more. The more than 40-year gap between the discovery of the loss of the VC in Sydney in 1868 to its auction in London in 1909 leaves far too many unanswerable questions – not to mention the gap from 1868 to 1956! The unsealing of Frederick Trench-Gascoigne's will in Vancouver in 1938 adds yet another twist. No information about the Goodmans and their movements can be found. Perhaps it’s time to bring the Hokitika and Auckland Mitchell VCs together, in an effort to ascertain some absolute truth in the matter. But the mystery of the Mitchell VC found in Vancouver in 1956 will no doubt tantalise military historians forever. 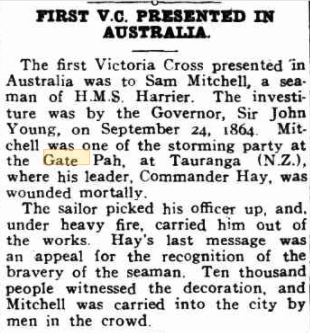 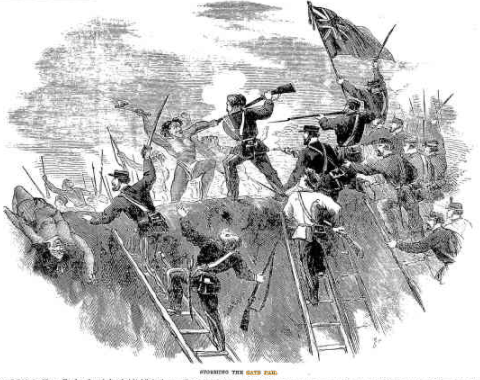 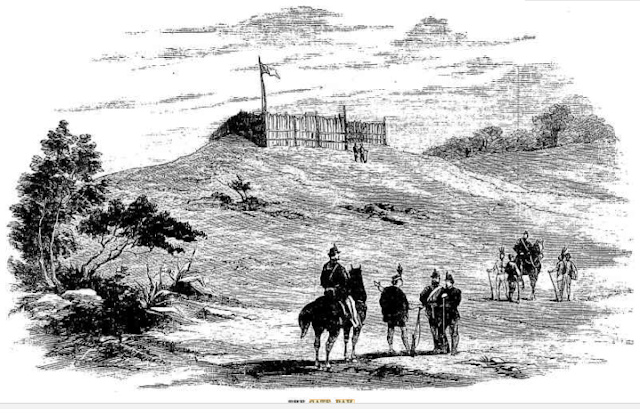 Posted by Robert Messenger at 11:10

Great article Robert. I believe you are the only person who could find so much historical information on a medal and then write an interesting story on it and presumably its twin.

Forging a military medal seems like a particularly low form of thievery, doesn't it?