50 Hours at an Underwood Typewriter: The 1924 Rhode Island Senate Filibusters 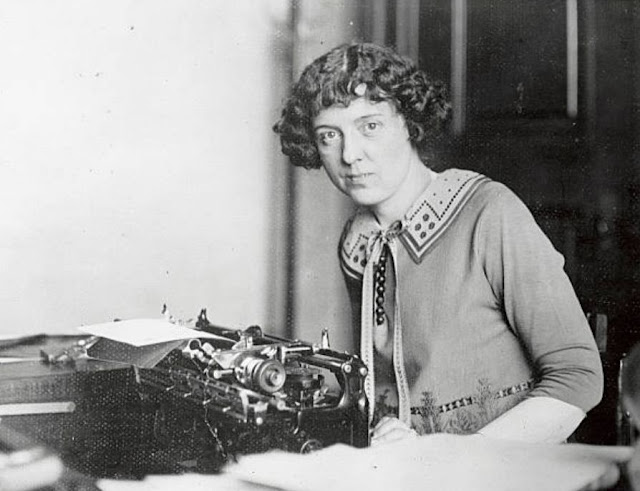 There's been many a post on this blog about the sprinters in typewriting history - the men and women who won world speed typing championships from the 1880s until the early 1940s. That these speedsters could maintain their impressive rates for up to an hour at a time was testament to their lasting power.  But when it came to out-and-out endurance typewriting, Anna Tague (1891-) of Providence, Rhode Island, had them all beaten into a cocked hat. As assistant secretary to Rhode Island Governor William Smith Flynn (1885-1966), Anna, above, was caught up in the Democrats' succession of filibusters in the Rhode Island State Senate in 1923-24. On one occasion, in June 1924, the filibuster lasted 42 hours, until a bromine gas bomb thrown into the chamber briefly interrupted the imbroglio. As the dust settled and the air cleared, Anna completed her record with a breathtaking 50 hours straight behind her Underwood typewriter. An earlier filibuster, in March, involved Democrat senators reading aloud Shakespearean plays and the entire Encyclopedia Britannica from cover to cover.

Anna was the second daughter of John and Bessie Bridget Tague (the correct spelling of the family name is actually Teague), who settled on Olney Street in Providence after arriving in Boston on the Catalonia in 1890 from Liverpool in England. The family home is at Muckros (one 's') near Ballinamore in County Leitrim in Ireland. Anna began working at 18 as a bookkeeper and later became a stenographer for the Vermont Manufacturing Company's Fancy Butterine and Cocolat store in Providence. (Butterine is artificial butter made partly from milk; cocolat is another word for chocolate). The fact that Anna was the niece of Massachusetts Congressman Peter Francis Tague (1871-1941) probably helped get her the job in Flynn's office. Peter Tague was a Democrat member of the United States House of Representatives from Boston, serving from 1919 to 1925. Both he and Flynn opposed the powerful influence of the Ku Klux Klan.

The term of Flynn, a progressive Democrat, was marked by the extreme partisan conflict within the senate, which was controlled by a Republican majority. A group of young Democratic legislators including Lieutenant Governor Felix A. Toupin and future Governor Robert E. Quinn staged filibusters for much of 1923-1924, attempting to get older Republicans to pass a resolution putting a constitutional convention up to a popular vote. Flynn refused to call the National Guard to restore order, saying that the executive branch should not interfere with legislative matters.
The story of the Rhode Island senate filibusters is best told here and here.
Briefly, trouble started with the 1923 election cycle, which ushered in a crop of enthusiastic and stubborn Democrats, though they remained five members shy of a majority. Rhode Island voting regulations excluded citizens who did not own property from voting in city council elections. The Republican majority allowed a vote on suffrage rights in 1923 but promptly defeated it. In 1924, Democrats wanted to get the Republicans to vote in favour of the voting amendment and have it brought to the public for approval.
The filibusters failed to have the desired effect, tensions mounted and tempers flared, and finally a fist fight was followed by the gas bomb. The chairman of the Republican State Central Committee, William C. Pelkey, was indicted on charges of conspiracy for hiring a 34-year-old Boston thug - William “Toots” Murray - to throw bromine gas into the chamber. The gas bomb was the mob’s second option - their first being to have Toots shut off the lights and shoot a few rounds of a gun into the ceiling. But at the end of the day, the Democrats were the big losers, in the ballot boxes.

Posted by Robert Messenger at 18:50

It is hard to imagine typing 50 straight hours on any typewriter. If it were any other brand I wonder if she'd been able to do it. Great story Robert. It proves politicians are really full of a lot of hot air.

Amazing story! Thinking about it makes me want to visit the Loo.

Ah, democracy! This sounds brutal for the poor typist. I'm surprised, actually, that there was a typist instead of a stenographer. Surely she wasn't typing every word that the Democrats read from the Encyclopedia Brittanica?