Covering the Cuban Revolution With Typewriters 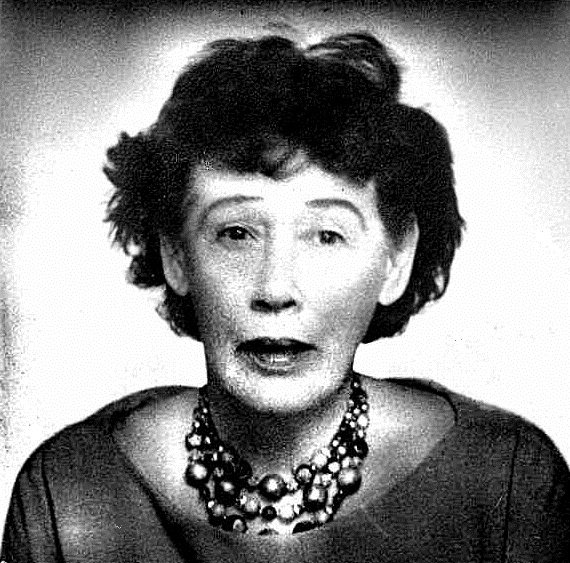 From Westinghouse typist to the Western World's insight into Cuba:
Ruby Hart Phillips covered the Cuba Revolution at her typewriter in an office a block from the Presidential Palace in Havana, with two lit cigarettes on the go, and in the company of a lame cat and a parrot.
It was 60 years yesterday from the day Fidèl Castro took his first official Cuban Government role, replacing José Miró Cardona as Prime Minister. Celebrations marking the 60th anniversary of the Castro-led Cuban Revolution started in Havana at the beginning of the year and included an exhibition which featured the Underwood standard typewriter used by Agence France-Presse correspondent Jean Huteau to write his dispatches. 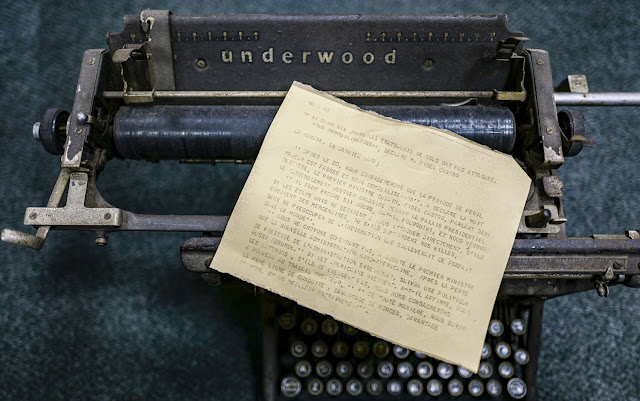 Jean Huteau's Underwood typewriter on display in Havana.
The anniversary has also been marked by the publication of Our Woman in Havana: Reporting Castro’s Cuba, by former British Broadcasting Corporation correspondent in Cuba Sarah Rainsford. The book includes a potted biography of the original “Our Woman in Havana”, the great New York Times correspondent in Cuba at the time of the revolution, Ruby Hart Phillips. Rainsford’s book was reviewed by Literary Review last November, under the headline, “The Revolution Will Not Be Televised Without the Proper Permit”. Given Phillips was the real pioneer in Havana, it should, of course, have read, “The Revolution Will Not Be Typewritten Without the Proper Journalists”. After all, Literary Review said “Rainsford weaves Phillips’s story into her own.” 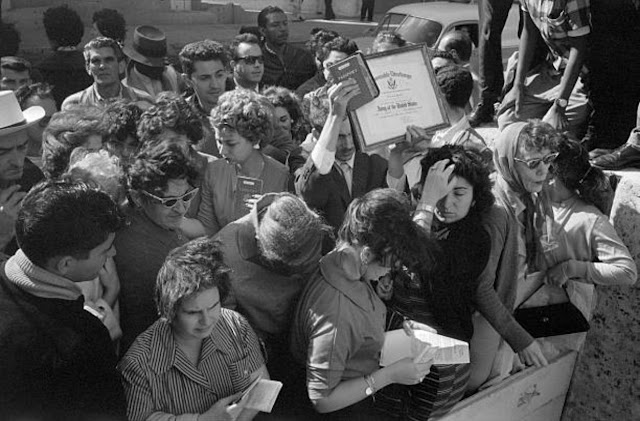 Above are the only two known photographs – at least to me – of the writer known to her American readership by the gender-neutral byline of R. Hart Phillips. At top is her portrait for a Brazilian immigration card issued in November 1961. The other photo shows Phillips in sunglasses, front right, among a group of American citizens and Cuban-Americans with dual citizenship who were left stranded in Havana on January 3, 1961, when the United States broke off diplomatic relations with Cuba. They sought help to leave the island nation at the back door of the US Embassy. But it was too late: the Embassy was closed and its staff had been evacuated. Phillips eventually succeeded in leaving Cuba in November 1961, after Castro had cracked down on the foreign press in April. Phillips’s home and office were raided and agency colleagues detained. For a short while The New York Times reported her as being “unaccounted for”. When Eleanor Roosevelt wrote about all this in May, she was still under the mistaken belief that Phillips was a man. Phillips reached Miami through Brazil and the Dominican Republic. 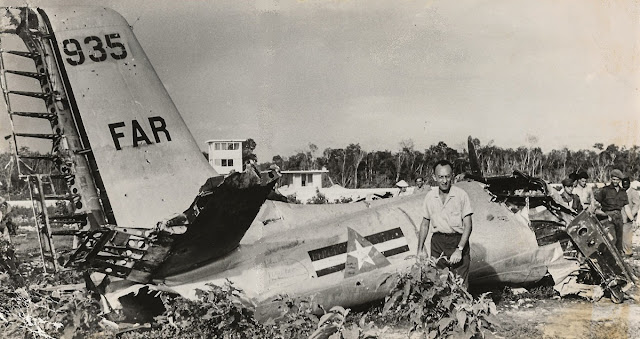 Similarly, there aren’t too many surviving images of Jean Huteau. In this one he is posing beside a downed solid-nosed Douglas B-26 Invader during the disastrous Bay of Pigs invasion, on April 17, 1961. The jet was clumsily disguised by the CIA and the Cuban Liberation Air Force in the colours and markings of the Cuban Revolutionary Air Force (FAR). Half the US planes masquerading as FAR fighters were shot down by Cuba’s Lockheed T-33 jets and propeller-driven British Sea Fury fighters. 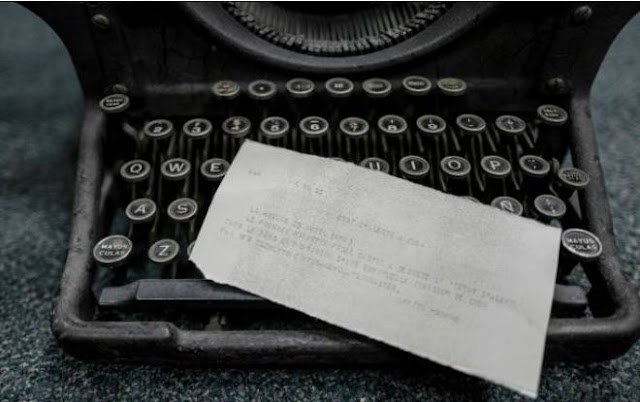 Huteau was born on April 21, 1919, in Orléans and died on July 29, 2003, in Chesnay. A resistance fighter in France during World War II, he worked for the French Army as a public relations officer in Indochina  from 1946-47. He then became the correspondent for du Monde and du Nouvel observateur in Buenos Aires, covering Latin America.
In 1958 Huteau was recruited by AFP and from September 1, 1959, he was in Cuba, taking over duties from Havana journalism school professor Carlos Tellez, who also worked for Reuters, and AFP’s head of political and diplomatic service, Jean Allary, who died in a plane crash between Bogotá in Colombia and Lima in Peru in June 1959. The next year Huteau opened the agency’s Havana office as bureau chief. He later became directeur de l’information of AFP in Paris. 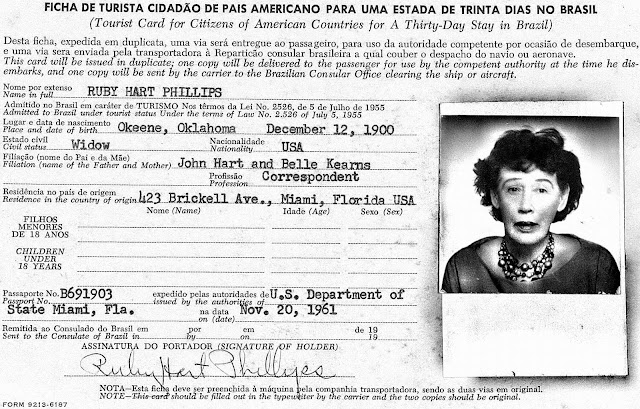 By contrast, Ruby Hart Phillips covered Cuba for The New York Times for 24 years from 1937. Her deliberately masculined byline topped dispatches about murders, hurricanes, politics and revolutions. She took over in Havana after the death in a car crash in Pomona, California, of her husband, Arkansas-born James Doyle Phillips (1896-1937), Cuban correspondent for The New York Times from 1931. Ruby was badly injured in the accident, which almost also claimed the life of the couple’s then 11-year-old daughter, Martha Jean Phillips. Described as a very brave and foolhardy woman, without good eyesight, Ruby Phillips’s habit of stopping to fix her lipstick before an interview might have infuriated colleagues, but it saved her life when she entered Fulgencio Batista y Zaldívar’s presidential palace on March 13, 1957. It meant she escaped a rifle, machine-gun and grenade attack which killed five guards by mere seconds. 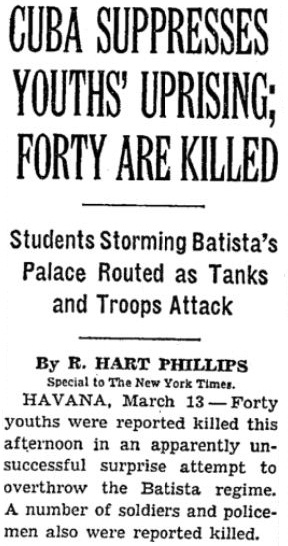 Her office was a block from the presidential palace. There she wrote articles on a typewriter near which was an ashtray in which two cigarettes always seemed to be burning. Among those she shared the office with at one point were a lame cat and a parrot. Phillips arranged the visit of a New York Times correspondent, Herbert Lionel Matthews (1900-77) to Castro in the Sierra Maestra Mountains in February 1957. Almost two years later, just before he was to make his triumphant entry into Havana, Castro paid his respects by sending Phillips an orchid that he had picked and had delivered to her office 700 miles away. 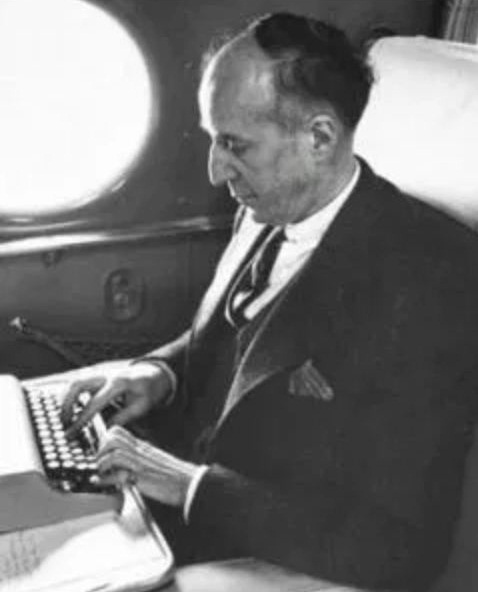 Matthews types on an Olivetti Lettera 22 on the flight home. Readers of The New York Times objected to his fawning writing about Castro.
Below, Matthews gets his just deserts. 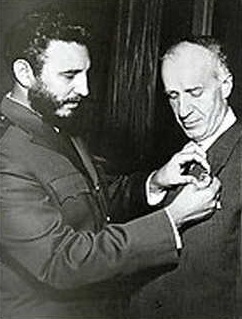 Ruby Hart was born to Tennessee parents on December 12, 1898, in a community called Sickle, Dewey County, Oklahoma, but because Sickle was but a speck on the map of west Oklahoma, she always gave her birthplace as Okeene. She also usually gave her birth year as 1900, a date not borne out by 1900 and 1910 census returns. Her father was a cattle merchant. Ruby learnt typewriting at a Dallas business school. In 1923 she went to Havana as a typewriter-wielding Spanish-speaking stenographer for Westinghouse Electric. There she met James Phillips, an Arkansan who owned a modest printing shop and translating office. After The New York Times named James Phillips as its Cuban correspondent, Ruby served as his assistant. Her first book, Cuban Sideshow (1935) was followed by Cuba: Island of Paradox, published in 1959, a personal history of Cuba from 1931 which covered the revolt that deposed the dictator Gerardo Machado, the rise and fall of Batista and the Castro revolution. A third book, The Cuban Dilemma, published in 1962, dealt with the days after Castro took power. 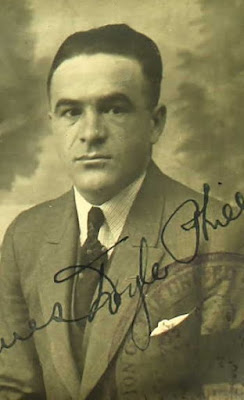 James Doyle Phillips
Ruby Phillips left The New York Times in 1963. She became the Latin American correspondent for Newsday until her retirement. She died on October 28, 1985, aged 86, at the Cape Canaveral Hospital in Cocoa Beach, Florida, having lived on Merritt Island for many years. 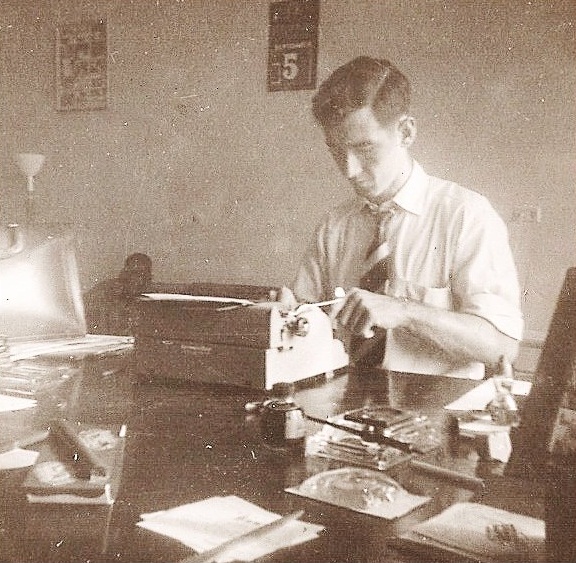 Bernard Diederich at his Remington portable.


Another great foreign correspondent wielding a typewriter in Cuba during the revolution was New Zealander Bernard Diederich. On January 8, 1959, TIME magazine gave Diederich the onerous task of finding out what colour pyjamas Castro wore on his first night in Havana. Diederich followed Castro into the capital, riding on a tank with female fighters from the 26th of July Movement. “My Santiago-issued laissez-passer did wonders,” recalled Diederich. “I was introduced to bearded rebel Comandante Camilo Cienfuegos, to whom I explained my challenging assignment. TIME would want a full description of Fidèl’s first night in Havana. Would the 26th of July leader choose to dance, date or dive into bed after his arduous trip up the island from the Sierra Maestra to Havana? Camilo smiled broadly when I also told him that I needed to know the colour of Fidèl’s pyjamas - if he wore them!” 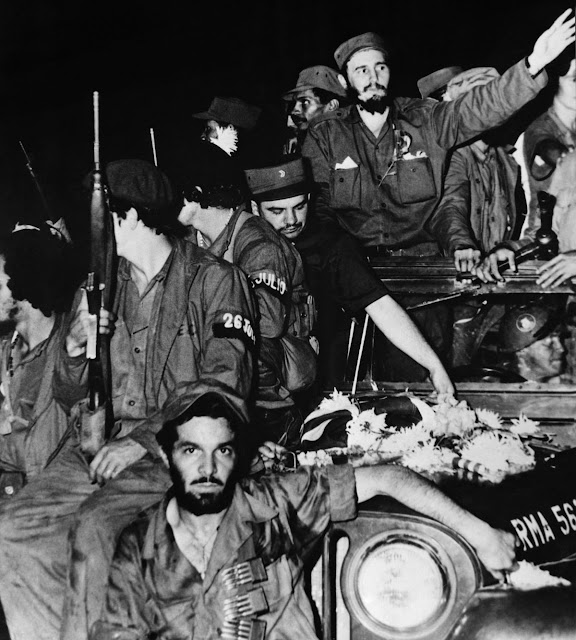 Fidel Castro and the 26 July Movement, with Camilo Cienfuegos (bottom), enters Havana on January 8, 1959.
Posted by Robert Messenger at 20:47

Interesting that there were reporters around when Castro took over.

Interesting to see that Ruby used a full size machine. You would think that correspondents would stay relatively mobile.