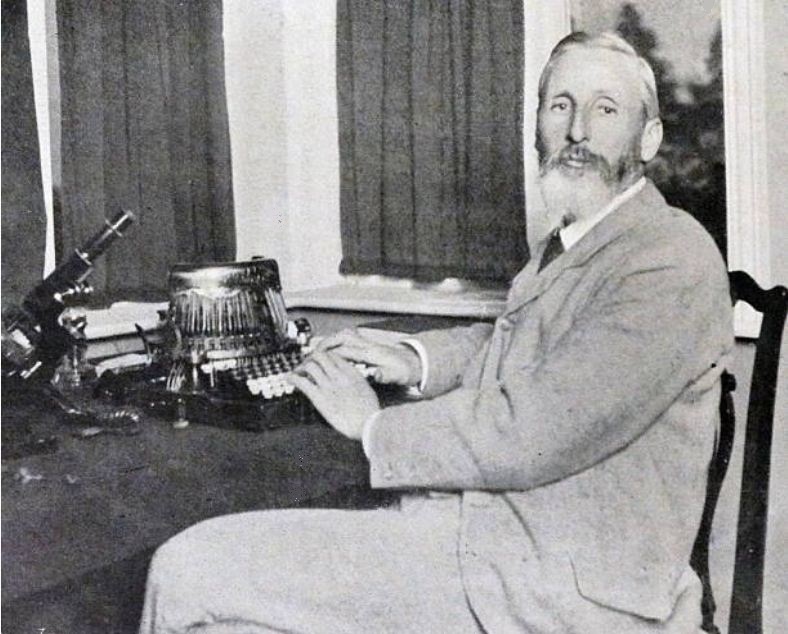 Grant Allen at his Royal Bar-Lock typewriter in a recess of his study at his villa, The Croft, in Surrey, England. The German microscope, left, was a gift to mark his services to science, orchestrated by none other than his friend Charles Darwin.
The "Busiest Man in England"
and "The Man Who Did"
Yesterday marked the anniversary of the birth, in 1848, of the science writer, novelist, journalist, botanist, biologist and advocate of evolution, Charles Grant Blairfindie Allen. Allen was born at Alwington outside Kingston, Ontario, Canada. Two years before his death from liver cancer, aged 51, at his villa The Croft, on the edge of the Devil’s Punch Bowl in Hindhead, Haslemere, Surrey, England, Allen wrote the novel The Type-Writer Girl, under the female pseudonym of Olive Pratt Rayner. He wanted to convince readers the book was written by a female and from a female point of view, and, as ever, he succeeded. 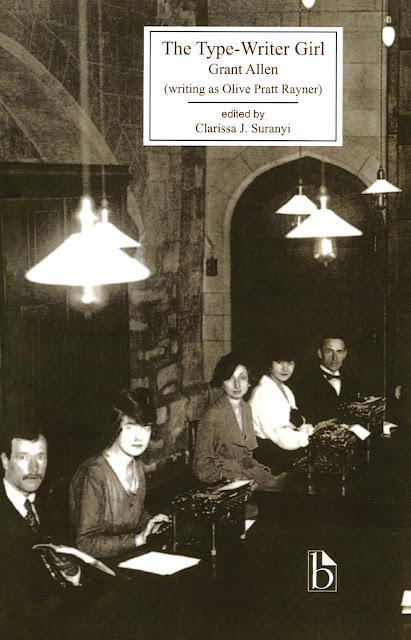 The Type-Writer Girl, published in London by C.A. Pearson in 1897, is a satire of an anarchist Utopia which invokes tensions typical of the fin de siècle (end of century) concerning evolution, technology and the role of women. The book can be read online here.
Until 1861 Allen was educated at home in the Thousand Islands region, on the upper St Lawrence River, by his father, Joseph Antisell Allen (1814–1900), a clergyman of the Church of Ireland and incumbent at Holy Trinity, Wolfe Island. His mother, Charlotte Catherine Ann Allen (1817–1894) was the only daughter of Charles William Grant, fifth Baron de Longueuil. In 1861 Grant Allen’s parents moved to New Haven, Connecticut, where Antisell Allen tutored at Yale University. The next year the family went to France, where Grant Allen studied at the Collège Impérial at Dieppe. He later transferred to King Edward's School in Birmingham, England, and in 1867 was elected to a postmastership at Merton College, Oxford University. He went on to gain a first class in classical moderations and a second class in the final classical school after only a year's reading, and took his BA degree in 1870. Allen returned to study briefly in France, then taught at Brighton, Cheltenham and Reading. 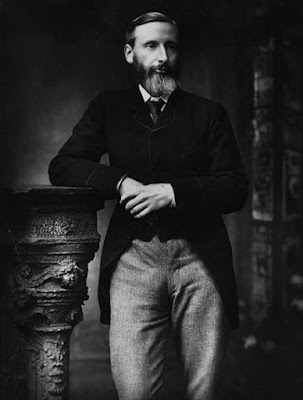 In 1873, Allen, aged just 25, was shipped across the Atlantic by the British Government's Colonial Office to become a professor of logic and mental and moral philosophy at Queen's College, a Jamaican Colonial Government school set up for West Indian students in Spanish Town, Jamaica. He was college principal from 1874 until the school was closed in 1877. During his ample spare time in the West Indies, however, Allen studied philosophy and physical science and framed an evolutionary system of his own, based mainly on the works of Herbert Spencer, the English philosopher, biologist, anthropologist, sociologist and prominent classical liberal political theorist of the Victorian era, but also on Charles Darwin’s theories. Notwithstanding Allen’s upbringing and early teachings under his Protestant minister father, Allen became an atheist and a socialist. 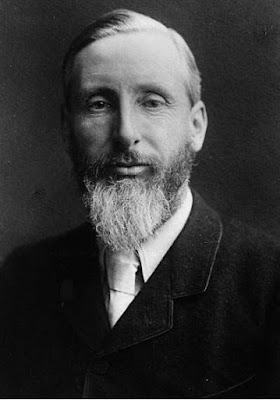 By the time he returned to England, Allen’s views on evolution from a Social Darwinist angle were well formed and he did not deviate from them for the remainder of his short life. He had decided to take up writing on scientific subjects, having his works published at his own expense, but was, according to the London Graphic, “rewarded with more praise than cash”. Indeed, Allen was out of pocket to the tune of £30 from his 1877 work Physiological Æsthetics alone, after an outlay of 100 guineas (the book was about the origins of the pleasure derived from natural or artistic products). So, following a suggestion from Andrew Chatto (1840–1913), a member of the publishing firm of Chatto & Windus, Allen turned to writing science fiction, using pseudonyms such as J. Arbuthnot Wilson, Cecil Power and Martin Leach Warborough. He was further encouraged in his short story writing by novelist James Payn (1830-98), editor of The Cornhill Magazine. In an amusing incident, Payn wrote to Grant Allen saying he didn’t want any more scientific articles, and in the same mail wrote to J. Arbuthnot Wilson asking for more short stories. The first of Allen’s novels was the pronouncedly socialist-leaning Philistia, a satire on socialism and modern journalism, largely autobiographical, published in 1884. Up to that time Allen’s entire profit from book writing amounted to a woeful £30 over eight years! He supplemented that meagre income by writing leaders for Charles Dickens' radical Daily News, notably on the Second Anglo-Afghan War of 1877-80. 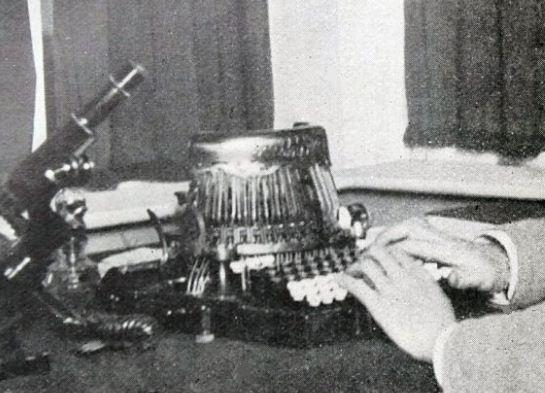 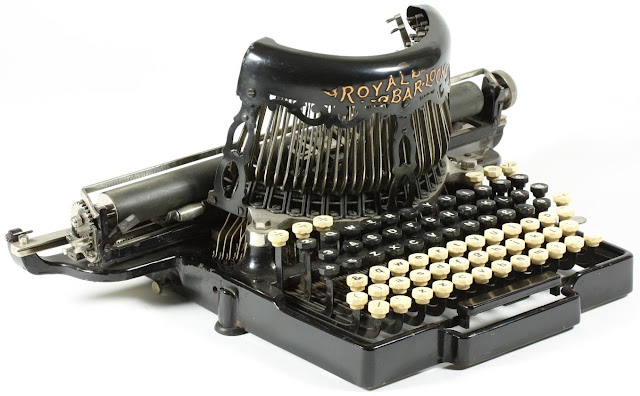 Between Philistia and The Type-Writer Girl, Allen produced 29 novels. His output increased markedly after he left London for Dorking in Surrey in 1881 and in 1893 he finally settled for the hills around the Devil's Punch Bowl. There, in a recess of his study in The Croft, Allen wrote at a table on which his Royal Bar-Lock typewriter sat beside a German microscope which Charles Darwin was instrumental in having presented to Allen, as an acknowledgement of Allen's services to science.
Among the more notable books Allen wrote at The Croft were The Woman Who Did (1895), about a young, self-assured middle-class woman, Herminia Barton, who becomes a single mother and defies convention as a matter of principle, and in the same year The British Barbarians, about an anthropology student, Bertram Ingledew, who travels back to 1895 England from the 25th century. That year H.G. Wells published The Time Machine, which mentioned in it Allen’s “queer notion” about ghosts. The notoriety of The Woman who Did helped establish the “new woman” novel as a genre. 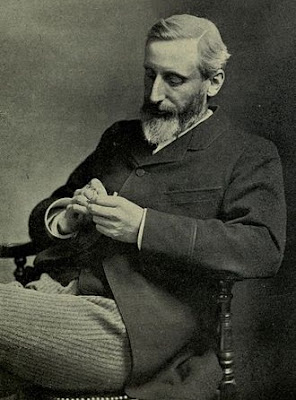 Allen died on October 25, 1899. He was in the process of writing Hilda Wade: A Woman With Tenacity of Purpose, one of the first detective stories with a strong female protagonist. It was completed by Allen’s friend, doctor and neighbour Sir Arthur Conan Doyle, and published in 1900.
In a frenzied 16-year writing career, Allen’s scope was wide, including tales about multicultural love, suspended animation and a future society's Eugenic practices, all the while embracing such things as the elements of the fantasy of mesmerism, a bacteriological research project and supernatural horror, not to mention straight science fiction. He got some varied and imaginative work out of that Royal Bar-Lock of his!
Posted by Robert Messenger at 17:01