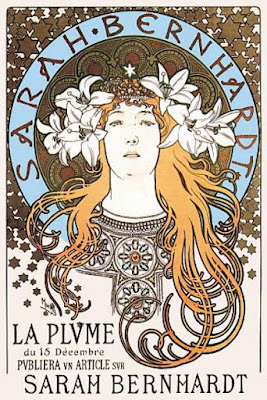 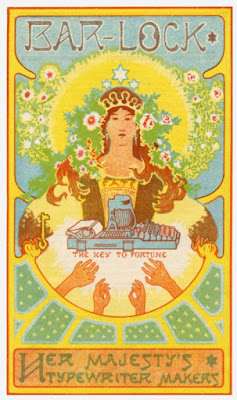 Flicking through the pages of The New Yorker edition of July 8 & 15, I came across an image which, at first, I thought was of a poster for the Bar-Lock typewriter. Instead, it was a Sarah Bernhardt poster, created in 1894 by Alphonse Mucha, the most celebrated graphic designer of the Art Nouveau movement. The Bernhardt-La Plume image appeared with The New Yorker’s A Critic at Large column, written by Hua Hsu and titled “Beauty in the Streets: How Posters Became Art”. It related to an exhibition, “Alphonse Mucha: Art Nouveau/Nouvelle Femme” which opened at the Poster House - the first museum in the United States dedicated exclusively to posters - at 119 West 23rd Street, New York City, on June 20 (and continues until October 5). 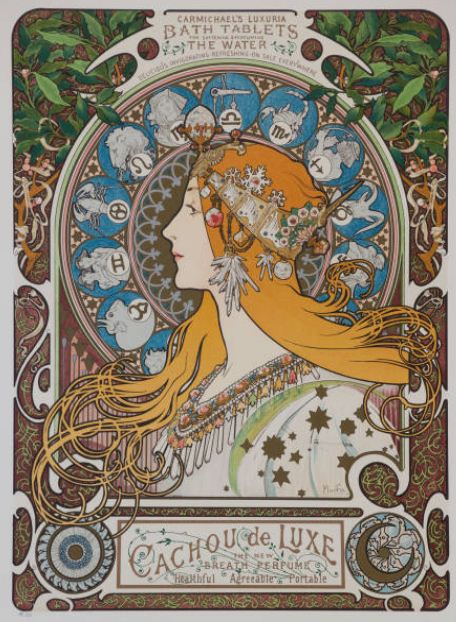 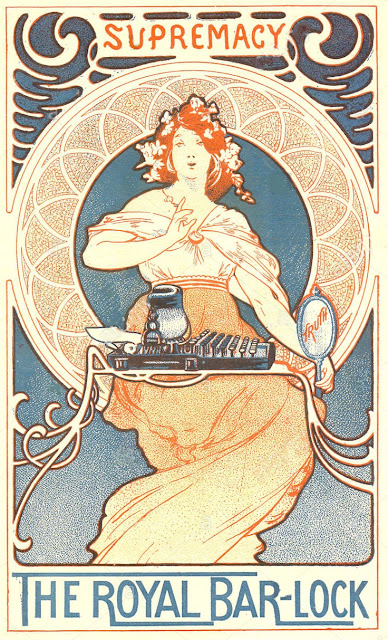 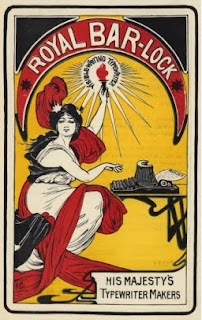 At a quick glance, it’s easy to see the likenesses between the Bernhardt poster and the early British Bar-Lock poster “Fate the Key to Fortune”. With the Bernhardt artwork, Mucha introduced the innovative feature of an ornate rainbow-shaped arch behind the actress’s head, almost like a halo, which focused attention on her face. This becomes a bright yellow light surrounded by flowers around the head of the woman in the Bar-Lock poster. While Mucha continued to use this style in later posters, so too did Bar-Lock, most notably in its “Supremacy - Truth” and “Visible Writing” posters, as well as in its “Father Time” poster. 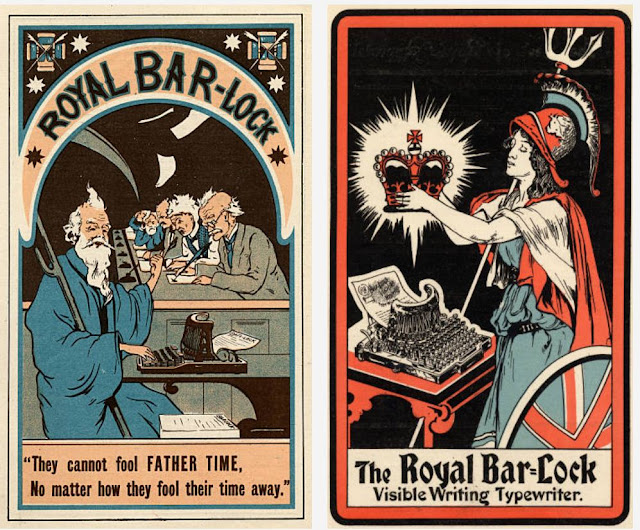 As with Mucha's work, the people in Bar-Lock posters aren’t always shown using the product they’re advertising, but they often look enraptured. The curvaceous women have long, wavy hair, and look bold and independent. 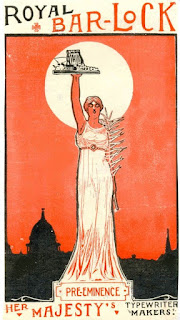 Still, while Mucha went on from Bernhardt and art to create purely commercial posters, including for bicycles, it’s highly unlikely that any of the Bar-Lock typewriter posters are his – we almost certainly would know about it if they were. No typewriter posters appear in his extensive catalogue of 119 works. But given the timeframe is right, it seems highly probable Mucha’s work directly inspired and influenced the Bar-Lock artists. After all, in 1901 Mucha had published Documents Decoratifs, a guide for aspiring artists and designers to replicate le style Mucha. It became an Art Nouveau bible, widely used in art schools and factories. 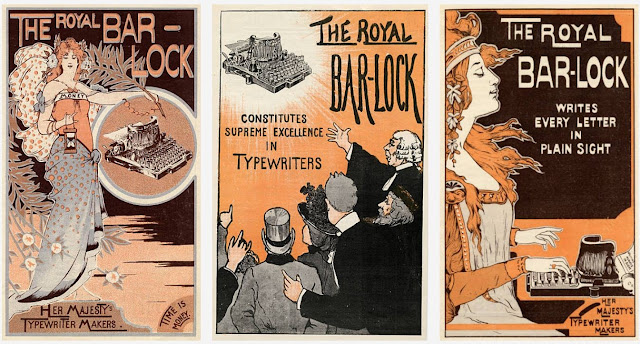 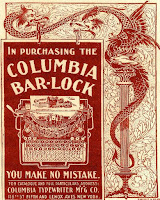 As far as I know, the creators of the Bar-Lock poster artwork have never been positively identified. The earlier posters, for the US (Columbia) Bar-Locks (left), were produced by Wagstaff & Co of New York. Since the Richardsons in London did not take full control of the Bar-Lock name until November 1913, it’s possible advertising artwork was shared across the Atlantic, with machines sold in Britain from 1895 labelled “Royal Bar-Lock”. 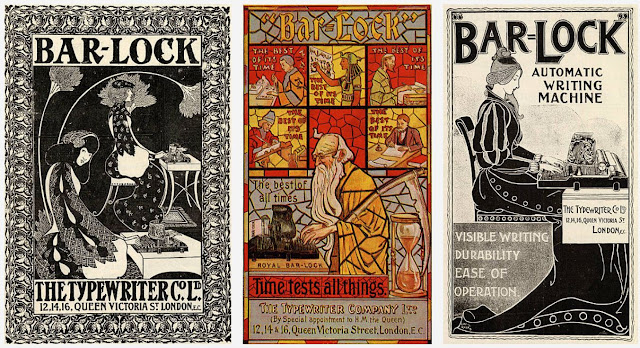 After striking a deal with Charles Spiro in New York, the Richardsons first sold Spiro’s typewriter in Britain in 1888, simply as the “Bar-Lock”. The Richardsons did not add “Royal” to the brand name until after they acquired Queen Victoria’s patronage. This allows us some idea of the timing for the appearance of the various posters. 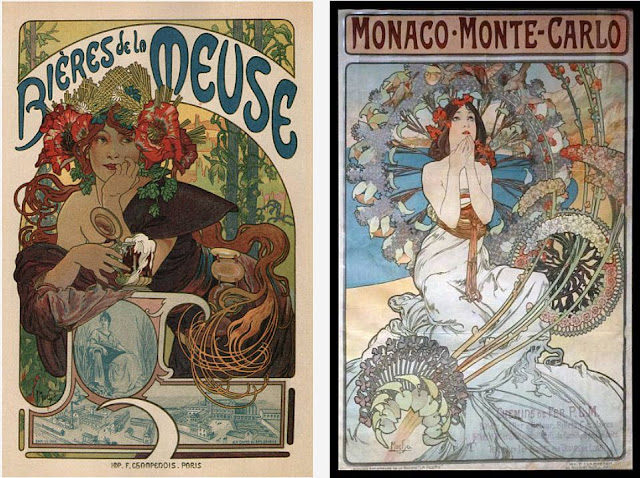 Alphonse Maria Mucha was born in Ivančice in Moravia (not Bohemia), then a province of the Austro-Hungarian Empire, in 1860. He went to Paris in 1887, but it was not until the end of 1894 that his career took a dramatic and unexpected turn. On December 26, Bernhardt made a telephone call to Maurice de Brunhoff, manager of the publishing firm Lemercier, which printed her theatrical posters, ordering a new poster for the continuation of the play Gismonda. She wanted it ready by January 1, 1895. Because of the holidays, none of the regular Lemercier artists were available. When Bernhardt called, Mucha happened to be at the publishing house correcting proofs. Brunhoff asked Mucha to quickly design the new poster for Bernhardt. The poster was more than life-size at more than two metres high, with Bernhardt in the costume of a Byzantine noblewoman, dressed in an orchid headdress and floral stole, and holding a palm branch in the Easter procession near the end of the play. 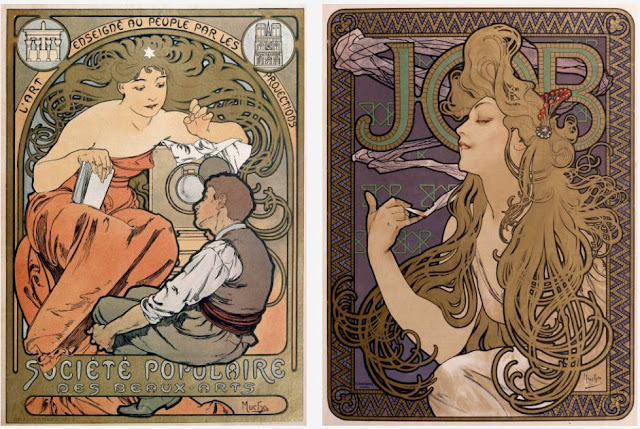 Mucha’s new-found fame coincided with with a poster craze that swept through Europe and the US in the mid to late 1890s. Magazines, galleries and clubs quickly emerged to respond to this appetite. At parties, women dressed up as their favourite posters and others guessed which ones they were. Posters even influenced the colours used in turn-of-the-century clothing. 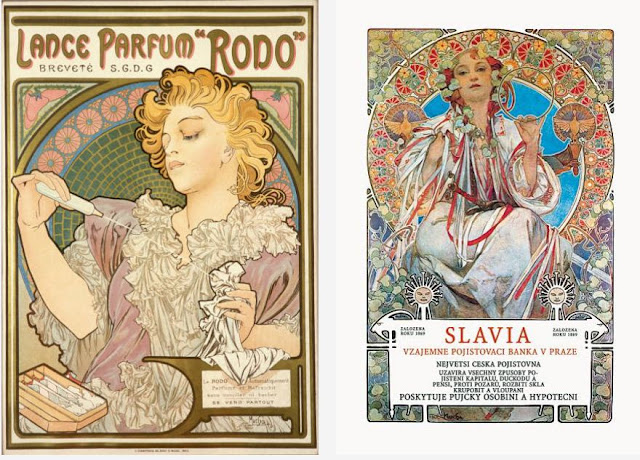 The Bar-Lock posters lack the fine, detailed draftsmanship in the backdrops in Mucha’s work, such the Byzantine mosaic tiles in the Bernhardt-La Plume poster.  But some match Mucha’s delicate pastel colours, and the words are distinctly stylised and ornamented. Mucha’s Bernhardt poster appeared on the streets of Paris on January 1, 1895, and caused an immediate sensation. This was, remember, the same year the Royal Bar-Lock took its new name. 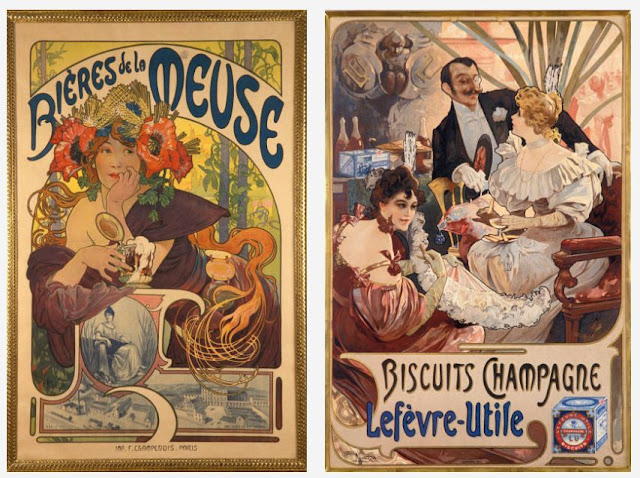 Bar-Lock posters remain among the most outstanding examples of typewriter-related artwork ever created. The likelihood that they were inspired by Mucha's early work makes them, I believe, all that more interesting and desirable.
Posted by Robert Messenger at 16:39

I never knew Bar-Lok had so many nice posters.

There are some real masterpieces here ... lovely to see.

See the last page (Letters) of ETCetera no. 115 for some information about one of these Bar-Lock posters, which closely resembles a poster by Will H. Bradley for Victor bicycles: http://etconline.org/backissues/ETC115.pdf

(In order to post this comment, I had to go through about 20 images identifying motorcycles and crosswalks. Let's hope that I prevented some pedestrians from being run over by self-driving cars.)