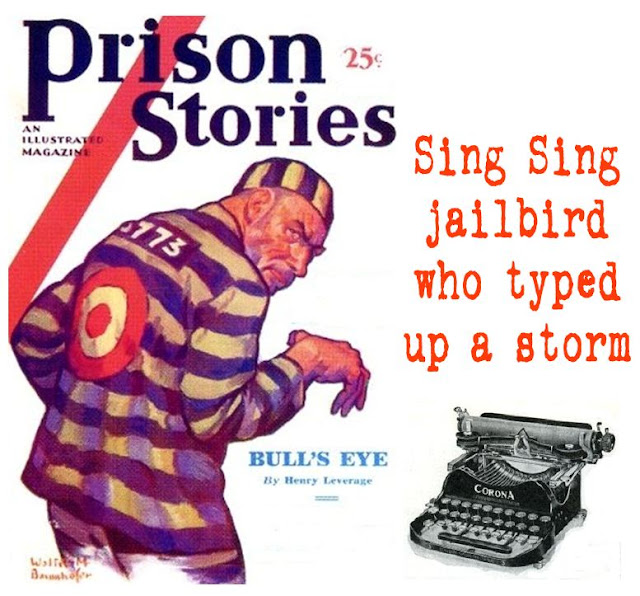 From Bachelor of Philosophy to a front for electric trolley inventions,
whaler, deserter, Alaskan gold seeker, railway telegrapher, newsman,
miner, card sharp, car thief, ‘general crook’ and Sing-Sing prisoner,
to best-selling novelist and Hollywood scriptwriter:
The Turbulent Life and Times of David Carroll Henry (1879-1931),
aka ‘Henry Leverage’
‘Henry Leverage’ was arguably the most prolific and successful pulp fiction writer of the immediate post-World War I era, yet you will find little about him online or in print – certainly very little that’s true. That is, until now, as the real story of David Carroll Henry will herewith be revealed. ‘Henry Leverage’ was not born in London, England, but in WaKeeny, Trego County, Kansas. He was born in on October 9, 1879, not 1885, and baptised in Philadelphia in 1886. He never stepped foot in England and never defended London with the Royal Air Force in 1917-18. But he did spend time in Sing Sing Prison in Ossining, New York, and was forever the king of spinning a good yarn … mostly with the aid of a Corona 3 portable typewriter and a most lurid imagination. 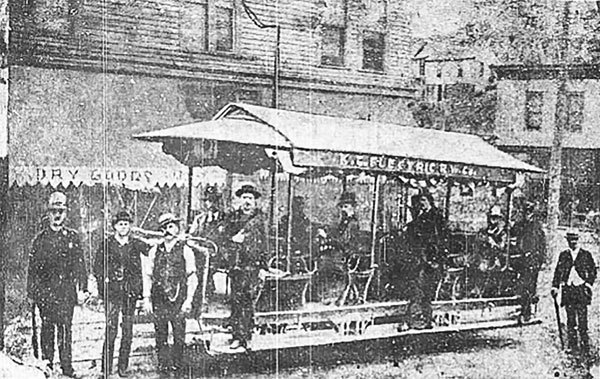 John C. Henry, second from left, testing the first electric trolley car along Broadway Boulevard, Midtown, Kansas City, in 1884.
David Carroll Henry became David Carl Henry and eventually just Carl Henry. He came from an industrious if itinerant family, who moved across the country from Kansas to Colorado, Pennsylvania to New Jersey and New York. His father, Ontario-born John Cummings Henry (1848-1901), was the inventor of the electric trolley, first tested in Kansas City in 1883*. His mother, Susie Ann McFadden (1854-), was able to cash in on her husband’s multiple patents after John Henry died in Manhattan in May 1901, assigning the rights to the Stanley Electric Manufacturing Company of New Jersey, makers of electric motors, which two years later was taken over by General Electric. From 1902 the family also used the name David Carl Henry to assign similar inventions by John C. Henry to GE’s rival, the Magnetic Transmission Company of Brooklyn, a practise with continued while Carl was in prison in Sing Sing from 1914-17.  In 1903 Carl graduated as a Bachelor of Philosophy from the University of Colorado in Boulder,  then – or so he claimed – he set off on the life of a sea-faring adventurer. 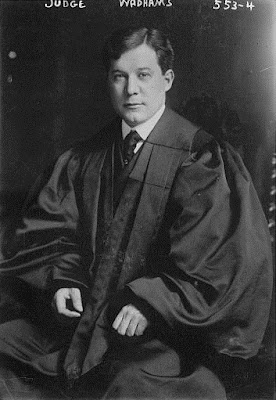 When in December 1914 the law finally caught up with the wayward Carl Henry - by then using the name ‘Henry Leverage’ - he faced Judge William H. Wadhams (above) in the New York of Court of Petty Sessions. Henry admitted “I have been a card sharp and a general crook”. That much was true. But when Henry went on to tell Judge Wadhams, “I can always earn a good living at my profession, which is that of an electrical engineer”, he was actually referring to the career of his late father. Carl Henry’s only qualifications were in philosophy and what he had learned at the Denver Manual Training High School, not, as he told Wadhams, as a member of the Royal Society of Engineers in London and the Institute of Electrical Engineers. “After I got started on the wrong road,” Henry added, “it was hard to get back again.” The court heard Henry had already spent time in prisons in Washington DC, Baltimore and Philadelphia, though there is no record of this. Wadhams duly sentenced him to three years and nine months in Sing Sing, for stealing a car (the charge was later changed to receiving stolen property). 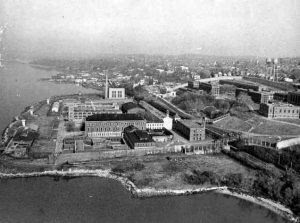 At Sing Sing (above) the lying went on unabated. Henry was signed in as Henry Leverage, prisoner 65368, but told prison officials that his true name was “Charles Henley”. Filling in details in the Receiving Blotter, he said he was born in London in 1883, and that his father was born in Leeds and his mother in London. The lengths Henry went to with this subterfuge were extraordinary: he claimed he had first arrived in America on the City of Paris on June 15, 1903, docking in New York, and was not a US citizen. He again claimed he was an electrical engineer. More tellingly, beside the line “Education”, Henry said he could read and write. 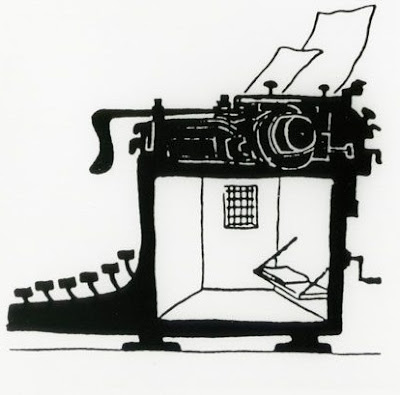 He most certainly could write, and had an exceptionally vivid imagination. Leverage’s prison stories, which he typed on a Corona 3 portable he said he’d acquired in 1913, were lauded for their authenticity. But when it came to stories about his own life, it became impossible to tell how much was fact and how much was the invention of his own mind. In an interview with the Brooklyn Daily Eagle in September 1923, for example, Leverage said he was born in London in 1880, was educated at Oxford Street, London, and had arrived in the US in infancy. He said he had run away from home in Denver as a youngster, worked on the waterfront in San Francisco before joining the crew of the brigantine whaler the Karluk as a stoker. He got as far as Herschel Island, and signed on for another season of whaling along the Siberian coast and in the Bering Strait before deserting at Port Clarence near Nome and joining the gold seekers in Kotzebue Sound. Leverage then returned to San Francisco on the Corwin, worked for three years on the Denver and Rio Grande Railway as a telegrapher, and started the Southern News Bureau in Walsenburg, Colorado, before being run out of town. For the next seven years he said he mined and travelled to Mexico, Panama, South America, China, Egypt, England and France. Then he returned to the US and started writing for a living. What, apparently, he neglected to tell the Daily Eagle is that he had spent two years, four months and 28 days in Sing Sing, before being released on April 17, 1917. The fact that Leverage was in prison when he wrote The Twinkler was used widely and heavily in publicising the 1916 movie of the story, but within seven years this had apparently been forgotten.

It is true that Leverage did register for a World War I call-up - calling himself a patents engineer - two months before the end of the war, but he never served. In a publicity letter for the Corona Typewriter Company, written 1924, Leverage claimed “I took [the typewriter] to England during the war and had it up in one of the Royal Air Planes used in defence of London.” This was just another fanciful imagining. 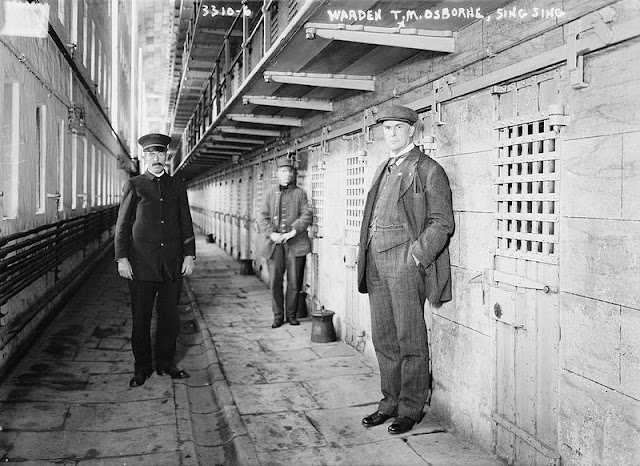 Leverage was released 17 months before famed New York newspaper editor Charles E. Chapin was incarcerated at Sing Sing for putting his wife out of her misery, and during his term behind bars Leverage would have been one of the most literate men either side of Sing Sing’s cell bars. Under the enlightened wardenship of radical prison reformer Thomas Mott Osborne (above), whose tenure at Sing Sing began 10 days before Leverage arrived there, Leverage was given the post of editor of the prison's newspaper, the Star of Hope. The appointment would also have had a lot to do with Leverage’s possession of a portable typewriter. Leverage wrote an article, “Two Years of Prison Reform” as a tribute to Osborne and his work at Sing Sing.

Masthead of the Star of Hope, edited by Henry Leverage while he was in Sing Sing. The newspaper was founded in April 1899 by forger Henry Kirke White, author of Life in Sing Sing. The masthead was designed by forger Francis Quigley.
When long-time pulp magazine editor and publisher Harold Brainerd Hersey (below) first visited Leverage in Sing Sing, he found the prisoner surrounded by pictures of Joseph Conrad, Rudyard Kipling and other well-travelled and well-known authors on the walls of his cell. Leverage had a small library on a shelf over a tiny table, on which sat the Corona 3.  “He was turning out thousands of words a week [Leverage later claimed he could write up to 10,000 words a day]. Like so many experts, he seldom revised a page once it left his typewriter … Nervous, wiry, energetic, with eyes sunk deep in his head and a habit of restlessly moving his legs and arms as he talked, he soon convinced me he was a serious author …  I never did ask him what had gone awry with his life. He told me when we first met that it was distinctly the wrong thing to interrogate a prisoner concerning his past .. I suspected that Henry Leverage had had a most exciting career. Now and again he let fall hints about experiences in China and Europe, anecdotes of sailing before the mast and adventures in the Far West.” 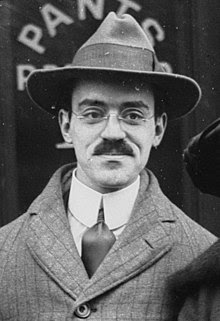 After his release, Leverage enjoyed most of the last 13 years and 10 months of his life as a celebrity, almost constantly in the newspaper gossip columns spotlight. It would seem, however, that for the money he earned from his writing, it was a case of easy come, easy go.  In his 1924 letter to the Corona Typewriter Company, Leverage said he had been paid $100,000 in cash for the movie rights for his major success, Whispering Wires, “with much more in royalties to come.” All up, he said he had made a profit of $250,000 from seven million “sold words” typed on his Corona over a period of 11 years – sometimes writing for 36 hours at a stretch. That breaks down to an average of 1750 words a day. In an article in the Star of Hope, he had advised fellow prisoners that they, too, could expect to be paid at least $500 for a published short story. On July 31, 1920, Leverage married May Alice Collins (1889-, not the actress of the same name) of Middletown, New York, and at the end of the decade the couple moved to Hollywood – ironically, renting a house right across North Cahuenga Boulevard from the Los Angeles Police Department. 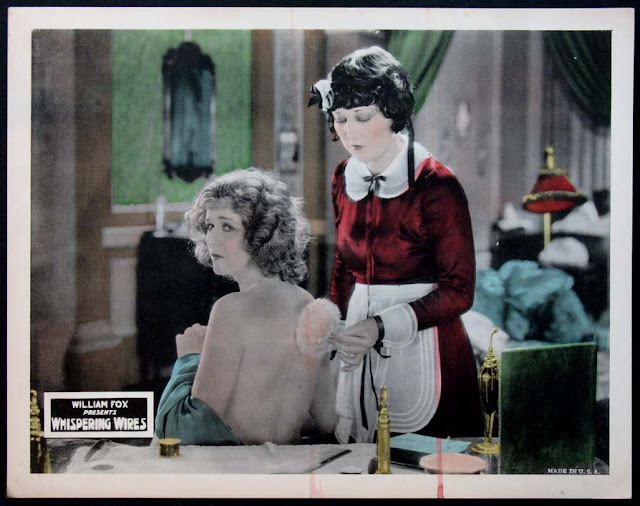 The truth about the Whispering Wires deal was a little more complicated than Leverage had cared to admit in print. In February 1919 Leverage was struggling financially and was offered just $1500 for the movie rights to his 1918 novel. Leverage instructed his agent, Laura D. Wilck, to accept the offer, but on her way to doing so, Wilck met producer-director George Broadhurst, who counter-offered with $500 down with an option on the rights.  The option was not taken up and for more than four years Leverage was left with just the $500, until screenwriter Kate L. McLaurin offered to dramatise the book on a 50-50 basis. The rights were immediately picked up by producer Lee Shubert and Whispering Wires was suddenly valued in the millions. Released in 1926, it was still screening two years later, when succeeded by the stage play version. 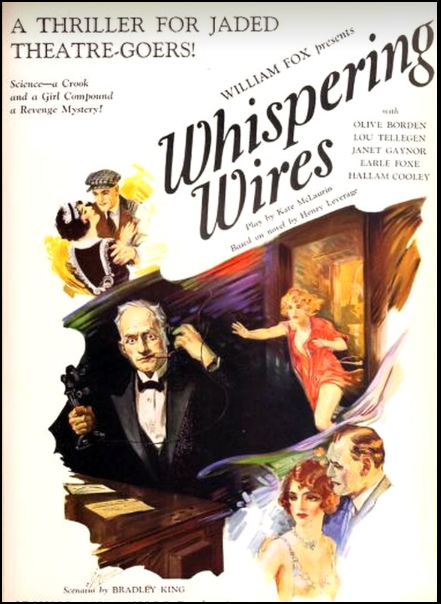 Notwithstanding the undoubtedly screen success of Whispering Wires, Henry and May Leverage’s sojourn in California was short and by the end of 1930 they had returned to May’s home town of Middletown. Henry died in the Druskin Hospital, West 123rd Street, New York, on February 24, 1931, after a 10-day illness. He was aged just 51. 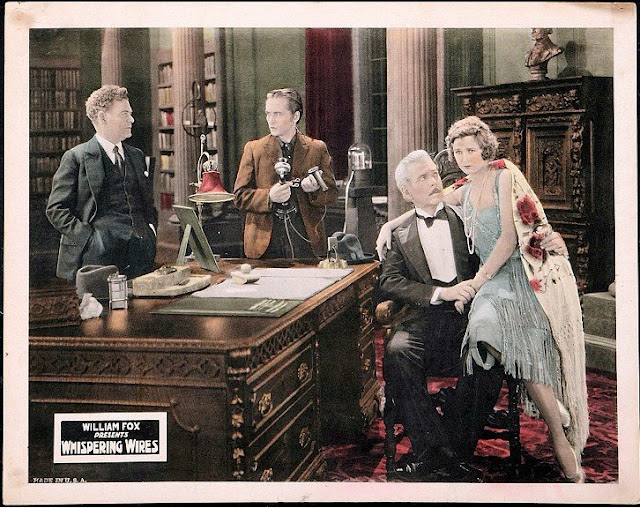 The Twinkler and Whispering Wires remain Leverage’s major legacies, along with his 1925 “Flynn's Dictionary of the Underworld”. But between 1918 and a year after his death, Leverage had had – under that name, his real name of Carl Henry and another pseudonym, Winfield Byrd – a staggering 114 stories published in various pulp magazines, a rate of more than eight a year. And that’s on top of 15 novels. But, then, fiction came easy to ‘Henry Leverage’. In some ways it could be said his whole life was built around fiction. 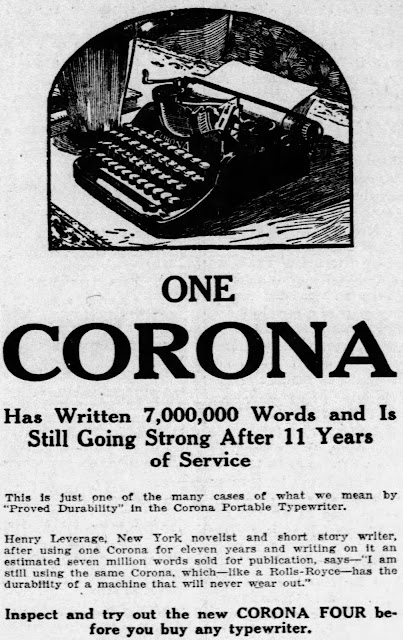 Apparently he had one super vivid imagination.

Well this is an interesting and obscure story. Henry Leverage almost disappeared in the the gloom until you resurrected his story and his Corona 3 typewriter. Great work.

That was a very entertaining read - thank you for this one. He really did have a varied life - stories to tell.

If he bought his Corona 3 in '13, he was well ahead of the curve - a portable typewriter was then still a very new thing, expensive too. But then, he clearly 'thought big'. :)