The Hills Were Alive With the Sound of Typewriters 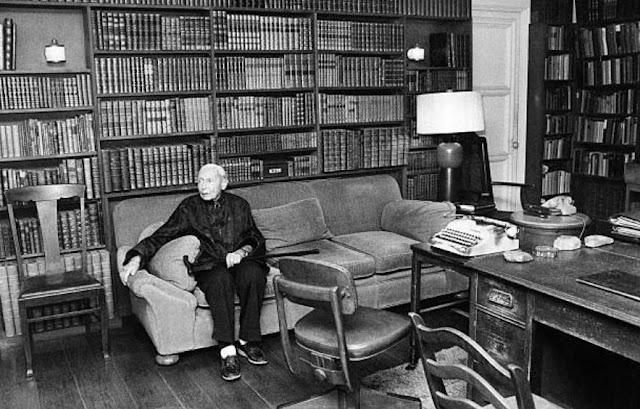 Marta Feuchtwanger (née Löffler; 1891-1987), widow of Lion Feuchtwanger, photographed with a Smith-Corona portable typewriter in 1985, in the library at Villa Aurora, at 520 Paseo Miramar, in the Pacific Palisades north of Los Angeles, a Spanish-style mansion overlooking the ocean. The Feuchtwangers settled here at the start of 1943.The Villa was built in 1927-28 and was a 20-room house with a massive garden that gave direct access to the beach. Marta was captivated by the view from the garden over the Bay of Santa Monica.
The thought "the hills were alive with the sound of typewriters" came to me, naturally, when I read Alex Ross’s article under the banner “Onward and Upward with the Arts” in the March 9 edition of The New Yorker. The article, titled “Exodus: The Haunted Idyll of Exiled German Novelists in Wartime Los Angeles” appears online as “The Haunted California Idyll of German Writersin Exile: Wartime émigrés in LA felt an excruciating dissonance between theircircumstances and the horrors unfolding in Europe.” 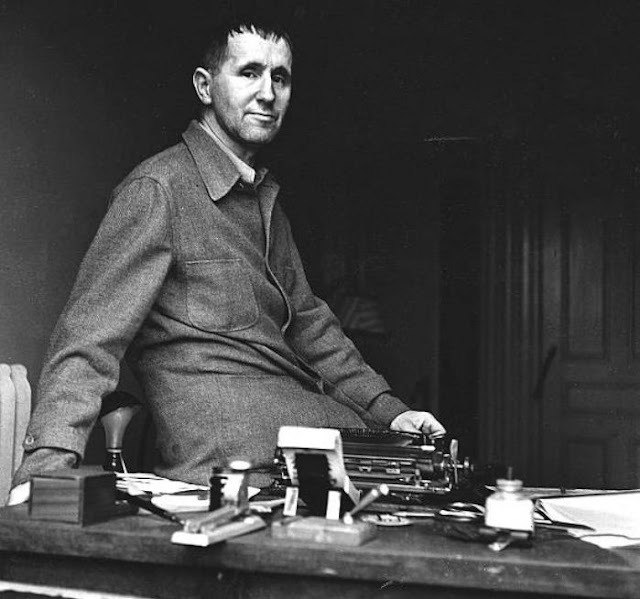 Bertolt Brecht with his Erika portable.
Ross opened thus: “You can visit all the addresses in the course of a long day.” He went on to list the writers: “Bertolt Brecht lived in a two-story clapboard house on Twenty-sixth Street, in Santa Monica. The novelist Heinrich Mann resided a few blocks away, on Montana Avenue. The screenwriter Salka Viertel held gatherings on Mabery Road, near the Santa Monica beach. Alfred Döblin, the author of Berlin Alexanderplatz, had a place on Citrus Avenue, in Hollywood. His colleague Lion Feuchtwanger occupied the Villa Aurora [at 520 Paseo Miramar], a Spanish-style mansion overlooking the Pacific; among its amusements was a Hitler dartboard. 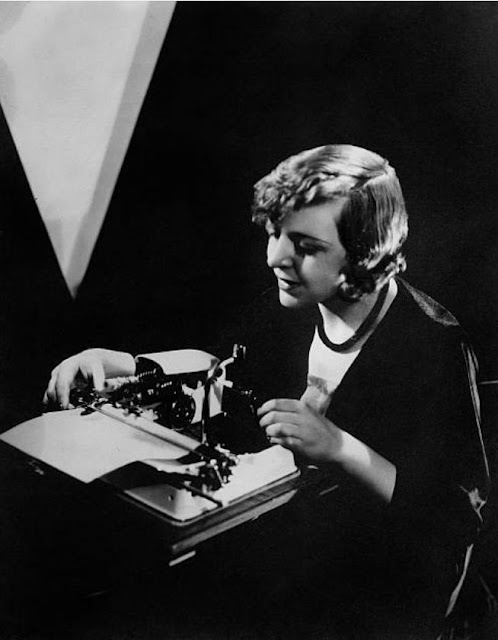 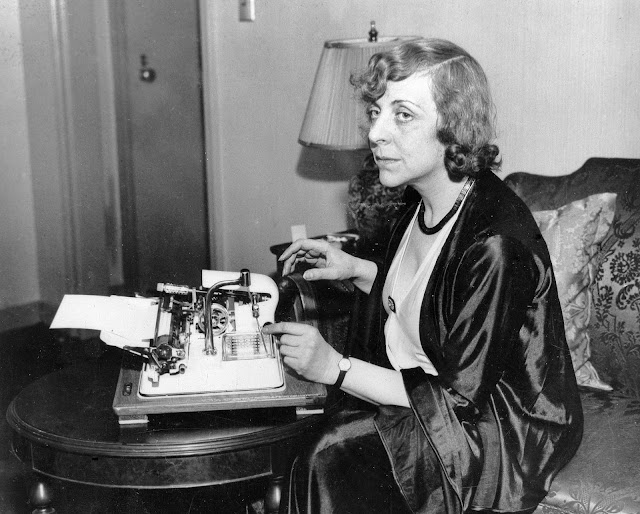 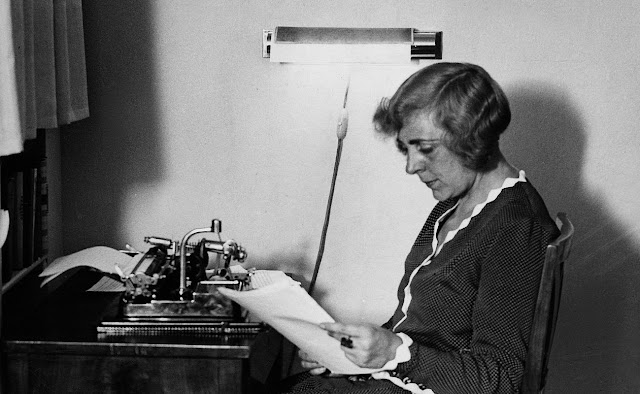 Vicki Baum with her Mignon.
“Vicki Baum, whose novel Grand Hotel brought her a screenwriting career, had a house on Amalfi Drive, near the leftist composer Hanns Eisler. Alma Mahler-Werfel, the widow of Gustav Mahler, lived with her third husband, the best-selling Austrian writer Franz Werfel, on North Bedford Drive, next door to the conductor Bruno Walter. 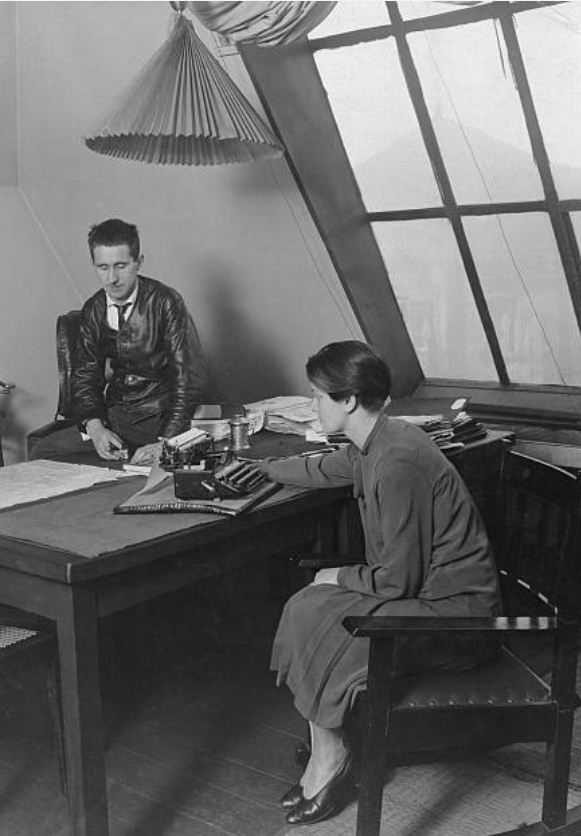 Elizabeth Hauptmann at her Corona 3 portable, with  Brecht.
“Elisabeth Hauptmann, the co-author of The Threepenny Opera, lived in Mandeville Canyon, at the actor Peter Lorre’s ranch. The philosopher Theodor W. Adorno rented a duplex apartment on Kenter Avenue, meeting with Max Horkheimer, who lived nearby, to write the post-Marxist jeremiad Dialectic of Enlightenment. At a suitably lofty remove, on San Remo Drive, was Thomas Mann, Heinrich’s brother, the august author of The Magic Mountain. 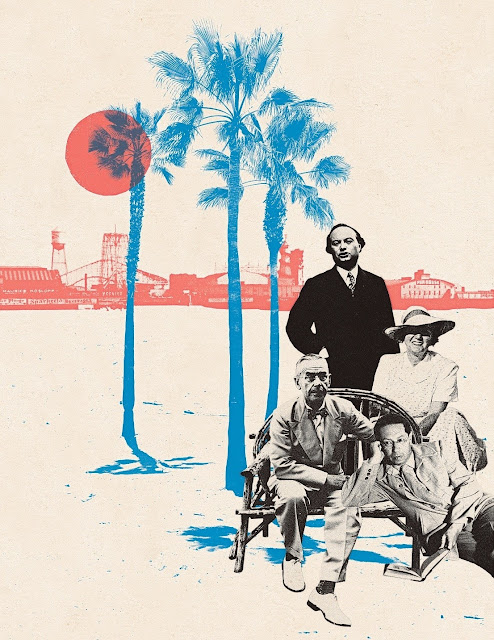 
“In the nineteen-forties, the West Side of Los Angeles effectively became the capital of German literature in exile. It was as if the cafés of Berlin, Munich, and Vienna had disgorged their clientele onto Sunset Boulevard. The writers were at the core of a European émigré community that also included the film directors Fritz Lang, Max Ophuls, Otto Preminger, Jean Renoir, Robert Siodmak, Douglas Sirk, Billy Wilder, and William Wyler; the theatre directors Max Reinhardt and Leopold Jessner; the actors Marlene Dietrich and Hedy Lamarr; the architects Rudolph Schindler and Richard Neutra; and the composers Arnold Schoenberg, Igor Stravinsky, Erich Wolfgang Korngold, and Sergei Rachmaninoff. Seldom in human history has one city hosted such a staggering convocation of talent.” 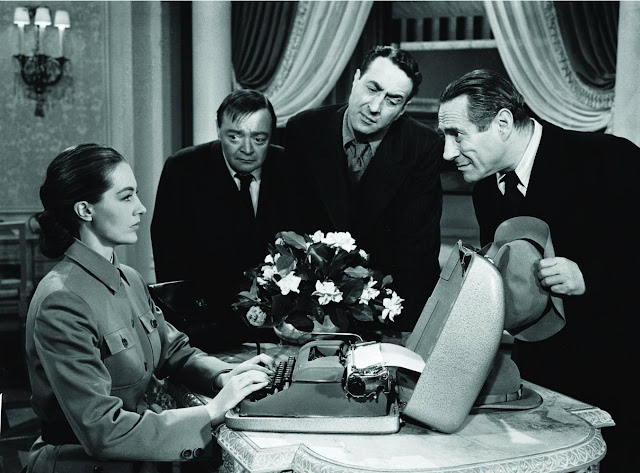 Thanks for another of you excellent posts, Robert.
Fritz Lang kind of jumped out. He did my favorite silent movie: Metropolis.

Great read! Thank you so very much for articles like these. I thoroughly enjoy them. And I get to learn some things as well!

I love the photos of Vicki Baum. That is the first time I've seen a serious writer using a Mignon!

Me too, Richard. I never thought that one would use a mignon for serious writing. I mean, short notes yes... but a whole book?!? Since I too have a mignon I will have to test that myself how good I will learn to use it.