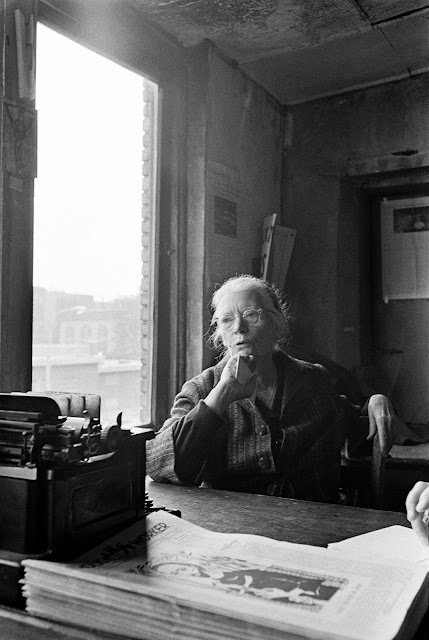 Have we had a typewriting saint since Mary Helen MacKillop was canonised on October 17, 2010? St Mary of the Cross (1842-1909), the first Australian to be recognised by the Catholic Church as a saint, took to a typewriter – a gift from a friend - after suffering a stroke in Auckland, New Zealand, in 1902, and learned to type one-handed.
The next typewriting saint may well be American journalist, social activist and anarchist Dorothy May Day, already widely regarded as a putative saint – although there is some opposition to her elevation. A proposal for Day's canonisation was first officially put forth by the Claretian Missionaries in 1983, and in March 2000 Pope John Paul II granted the Archdiocese of New York permission to open Day’s cause. The archdiocese submitted the cause for the endorsement of the United States Conference of Catholic Bishops in November 2012. In the closing days of his papacy, on February 13, 2013, Pope Benedict XVI cited Day as an example of conversion to devotion. He quoted from her writings and said, “The journey towards faith in such a secularised environment was particularly difficult, but Grace acts nonetheless.” Benedict’s successor, Pope Francis, praised Day before a joint session of the US Congress in 2015, including her in a list of four exemplary Americans who “built a better future” (the other three were Abraham Lincoln, Martin Luther King Jr and Trappist monk, writer, theologian, mystic, poet, social activist, and scholar of comparative religion Thomas Merton). Francis said of Day, “Her social activism, her passion for justice and for the cause of the oppressed, were inspired by the Gospel, her faith, and the example of the saints.” 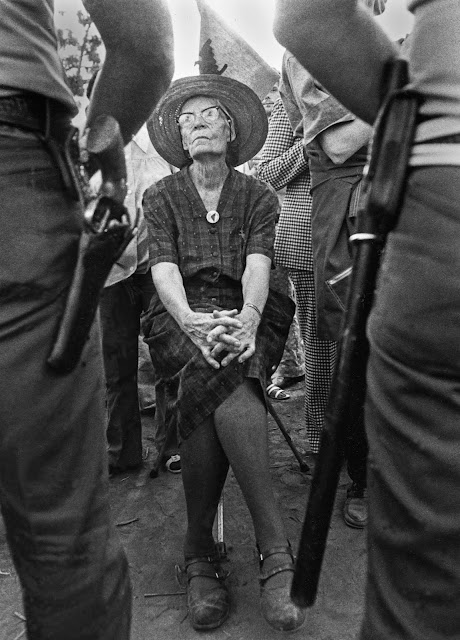 An article by Casey Cep in The New Yorker last month, “A Radical Faith - The life and legacy of the Catholic writer and activist, whom some hope will be made a saint”, was timely, given the plight of the poor in American during this pandemic. Cep said “the cause of [Day’s] sainthood is officially advancing within the Catholic Church” and pointed out it was writer, editor, film critic, social critic, philosopher and political radical Dwight Macdonald who, at the outset of a two-part Profile published in The New Yorker in the autumn of 1952, first called Day a saint (see below).

Dwight Macdonald
But Cep also commented on the mixed views about Day’s possible sainthood. She quoted Day’s latest biographers as saying some conservatives are “horrified at the prospect of canonising a woman who had an abortion and a child out of wedlock and who condemned capitalism far more frequently and vehemently than she condemned Marxism-Leninism”, while some progressives “fear the loss of her radical edge”, believing that sainthood “would be antithetical to her very uninstitutional, anti-hierarchical approach to spiritual growth and social change.”
Cep said Day, “devout and left-wing, believed we needed ‘a revolution of the heart’”. “Day had been alarmed by [poverty] her whole life. She first encountered it in the slums of Chicago, where she lived as a teenager, and she saw it all around her in New York City, where she moved after dropping out of college, and lived for more than six decades. Even before the Great Depression, Day had been sensitive to the plight of the poor, a sensitivity that ultimately shaped her calling.” 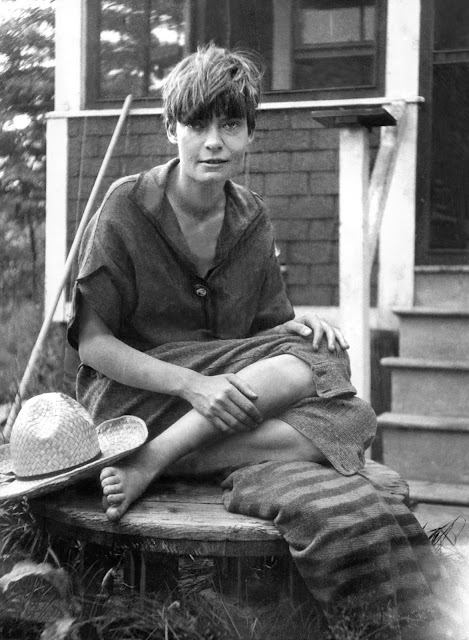 Day converted to Catholicism in 1928, aged 30. “In the years that followed, she started a radical newspaper and began opening what she called ‘houses of hospitality’ for those who needed something to eat and somewhere to stay,” wrote Cep. “Eventually, Day’s Catholic Worker Movement would serve the poor in more than 200 communities. Under her guidance, it would also develop a curiously dichotomous political agenda, taking prophetic stands against racial segregation, nuclear warfare, the draft and armed conflict around the world, while opposing abortion, birth control and the welfare state. That dichotomy seems especially stark today, when most people’s beliefs come more neatly packaged by partisan affiliation. But by the time she died, in 1980, Day had become one of the most prominent thinkers of the left and doers of the right.”
Day was born in Brooklyn Heights, New York, on November 8, 1897, and her family relocated to California in 1904. Two years later they were living in Oakland when the San Francisco earthquake struck. “That tragedy changed Day’s life in two ways,” wrote Cep. “First, it affirmed her pre-existing fears about annihilation, while simultaneously stirring in her a theory of mercy based on her mother’s nightly reassurances and the broader response of collectivity and charity. Why, she wondered, couldn’t the community care for all its members so generously the rest of the time? The second change was more pragmatic: her father, John, was a sportswriter who could barely support his wife and five children on his salary, so when the earthquake destroyed the press that printed his newspaper he moved the family again, this time to Chicago.” 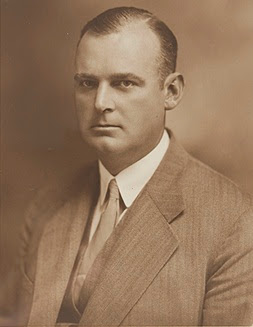 Donald S. Day
Later, back in New York, Day’s father had helped her brothers find journalism jobs, but he refused to help her. (Dorothy’s brother, Donald Satterlee Day, 1895-1966, was an American reporter in northern Europe for The Chicago Tribune in the 1920s and 30s. As a broadcaster on German radio for several months during World War II, he argued that the United States should support Nazi Germany in its war against the Soviet Union. Following the Allied victory over Germany, he was twice arrested by US authorities and investigated for treason, but no charges were brought. Due to his position in eastern Europe as a reporter for many years, Day was able to provide the US government with tips about Soviet espionage agents, which played a part in his charges being dropped). 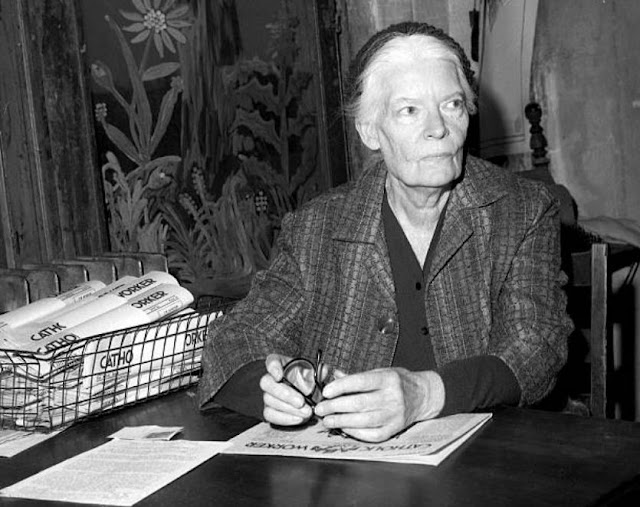 Dorothy found a job with The Call, a socialist daily in which her first byline appeared under the headline “Girl Reporter, with Three Cents in Her Purse, Braves Night Court.” A few weeks later, she interviewed Leon Trotsky, who was then living in the Bronx. After that, she managed to craft a feature from a three-minute conversation with Margaret Sanger’s sister, newly released from prison and desperate to drum up support for the American Birth Control League. In 1933 Day and Peter Maurin established the Catholic Worker. They sent the monthly publication to parishes and priests around the US, and it soon had a circulation of 100,000. To help accommodate the homeless during the depression, in the winter of 1934 Day and Maurin rented a four-story, 11-bedroom building on Charles Street, New York, the first of their hospitality houses. Within a few years, there were 32 hospitality houses, from Buffalo and Baltimore to St Louis and Seattle. “We cannot love God,” Day wrote in her memoir The Long Loneliness, published in 1952, “unless we love each other, and to love we must know each other.” The Catholic Worker Movement still exists, with nearly 200 houses of hospitality around the world and a newspaper that is still published and sold for a penny (plus postage if you take it by mail).
Day suffered a heart attack and died on November 29, 1980, at Maryhouse on East 3rd Street in Manhattan. 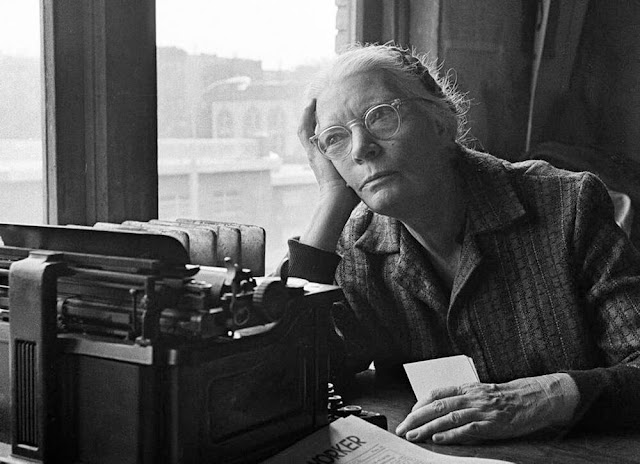 Posted by Robert Messenger at 08:37