In Praise of the Typewriter: The Early Days of American News Agencies 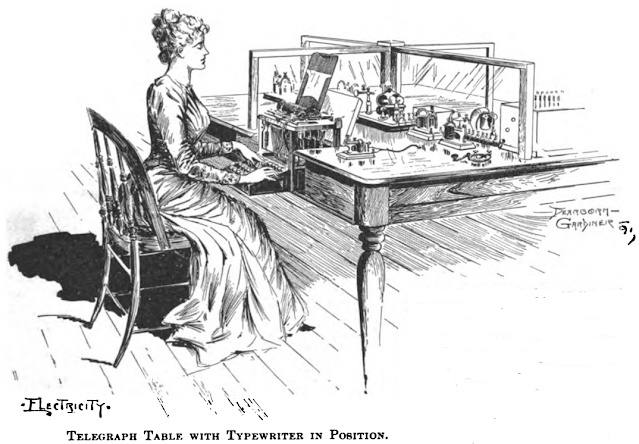 “By far the most important and valuable improvement in the efficiency of the electric telegraph in the past three or four years has been brought about by the introduction into telegraph work of a machine that has absolutely nothing electrical about it. While not all inventions that give added efficiency and greater advantages to the community contribute increased comfort to those required to use them, some rather entailing more laborious work or more fatiguing and trying conditions to the individual, the use of this invention has rendered easy and pleasant a class of work that was tiring and nerve-wearing in the extreme. The thing that has done all is the typewriter. This marvellous little labour-saver and life-lengthener has become absolutely indispensable in several of the more important branches of the telegraph service, a necessity to the complement of every first class operator, and soon its lively patter will be the unvarying accompaniment to the brisk clicking of the sounder in every telegraph office in the land.”

So wrote noted English-born journalist, and former telegraphist, Samuel John Pryor (left, 1865-1924) in his introduction to a lengthy article headed “The Typewriter: First Lieutenant to the Telegraph”, published in W.H. Temple’s weekly, the Electricity newspaper on December 9, 1891, and illustrated by H. Dearborn Gardiner. Given the typewriter, at its conception, was primarily aimed at just such work, it may seem odd that it took until 1887 or 1888 for its true virtues to become fully appreciated at major news agencies such as United Press* and Associated Press. Pryor says AP first introduced typewriters “as an experiment” into its offices in 1884, 10 years after the typewriter first went on the market. According to the article, UP and AP only started using typewriter “exclusively” in all their offices in 1889.

(*This United Press, formed in 1882, is not to be confused with the later wire service which became known as UPI. The original UP collapsed in late March 1897, owing the Western Union Telegraph Company $207,000, after New York newspapers the Times, Herald, Tribune and Evening Telegram, as well as the Philadelphia Evening Telegraph, ditched UP and switched to AP, leaving the New York Sun as UP's last user.) 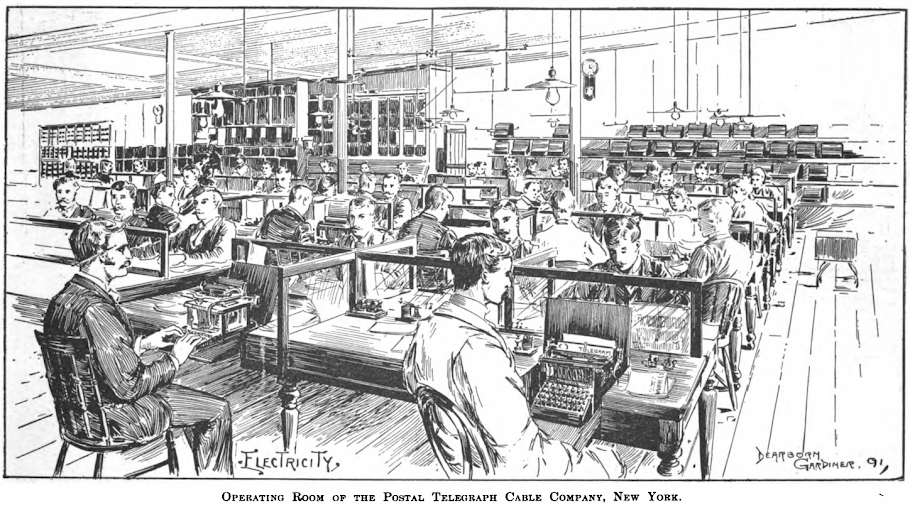 Pryor quoted UP superintendent Frederick N. Bassett as saying “There has been a revolution in telegraphy” [Yes, a typewriter revolution!] Bassett went on, “It is the typewriter, backed by its ally the Phillips code, that has accomplished it.” (In Phillips’s 1897 book Sketches Old & New, the author rated Bassett as one of the eight best telegraphists he had ever worked with.) The Phillips code was developed by Walter Polk Phillips (right, below, 1846-1920), like Pryor a journalist and telegraph operator. His was a brevity code which, for example, introduced to America the abbreviations POTUS and SCOTUS. Phillips was general manager of UP from 1882 until 1897. 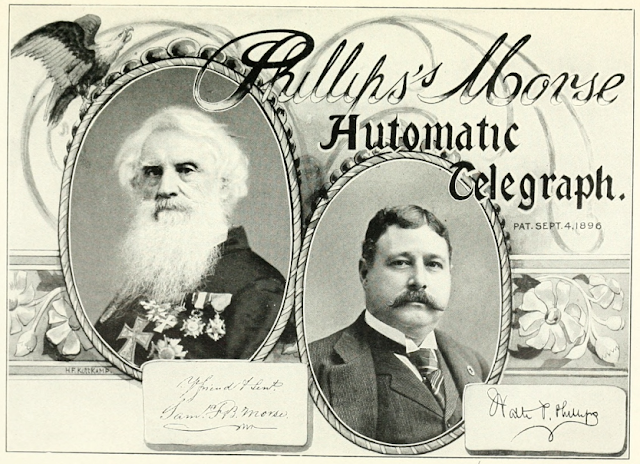 Born in Grafton, Massachusetts, Phillips started work as a messenger with the American Telephone and Telegraph Company in Providence, Rhode Island, in 1861. He became an expert telegrapher, noted for his speed in sending and receiving messages. Within three years he had risen to be a reporter in charge of copying AP news despatches. His skill caught the attention of Samuel Morse, who  praised him for his “dexterity” in the use of Morse code as well as his “faultless manner of recording” messages. Phillips won telegraphy contests, in one setting a record by accurately transcribing 2731 words in an hour (45.2 wpm). He joined AP in 1867 and was made manager of its Washington DC bureau the next year. In 1875 he persuaded AP to establish America's first leased wire, for press service, linking New York, Philadelphia, Baltimore and Washington. Determined to make the AP the fastest news service in the US, he revised the existing abbreviations and codes used in the transmission of press stories and in 1879 published the first edition of the Phillips code. As an inventor, he patented an improved form of hand key and with Roderick H. Weiny invented a single line repeater known as the Weiny-Phillips. He was joint inventor of the first successful semi-automatic key, the “Autoplex”, patented in 1902 by Horace G. Martin. 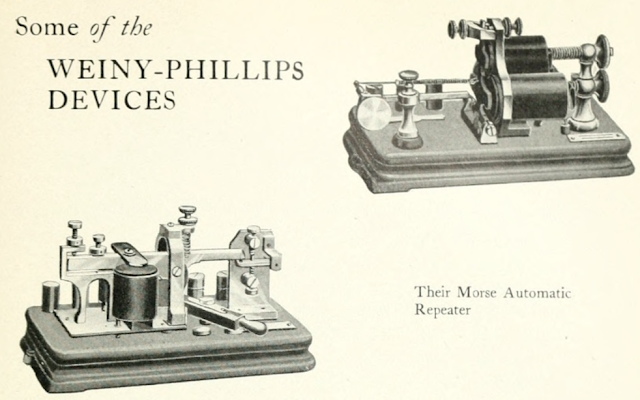 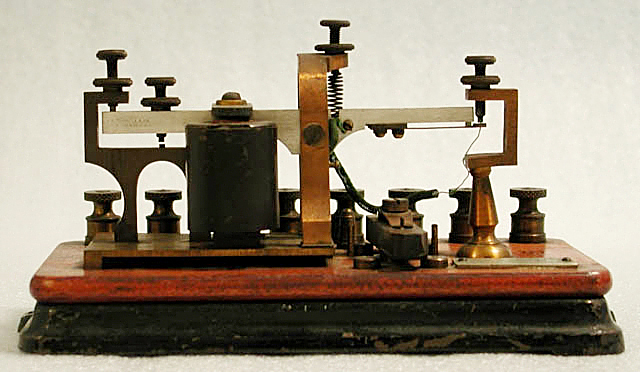 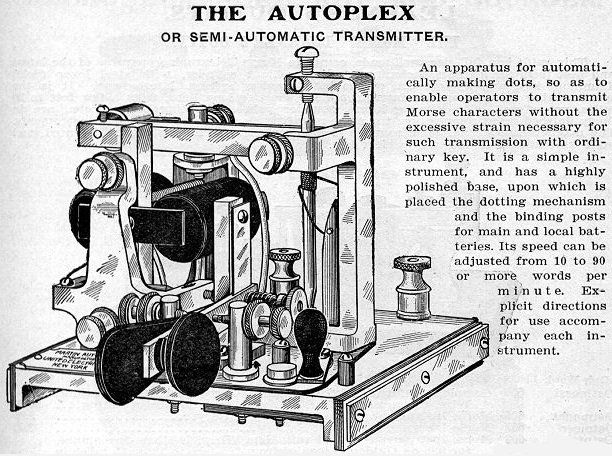 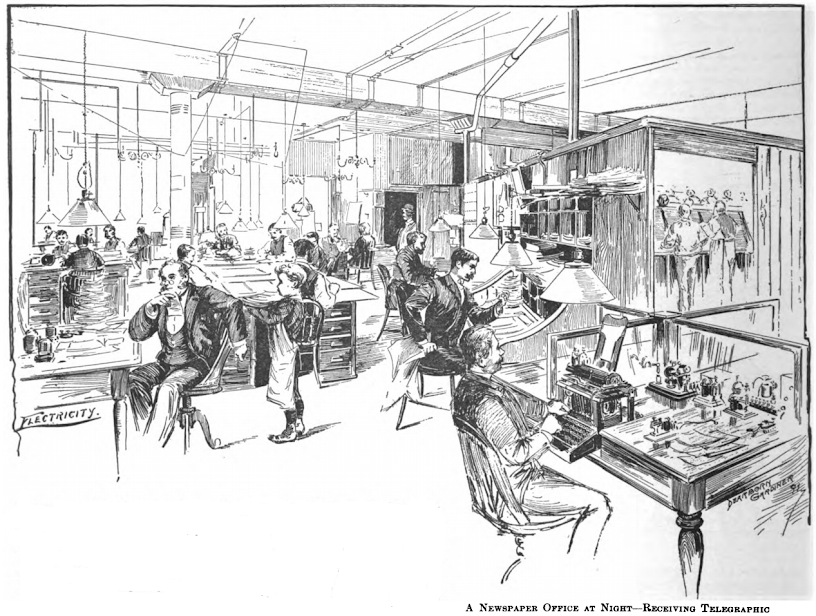 Pryor pointed out that before typewriters were introduced to these wire services, night reports in total averaged 8000 words and an entire day’s reports totalled about 18,000 words. With the use of typewriters, the night reports total rose to 14,000 words and the day’s total to 30,000 words. Operators wired stories at 40 words a minute and with typewriters reporters wrote reports at 70 words a minute. Producing carbon copies was also made significantly easier. The Phillips code almost doubled output and on one occasion UP wired a news special of 3500 words to all the newspapers receiving its service within 55 minutes. Typewriters improved the services immeasurably, allowing for longer stories, more stories and later breaking stories. Remingtons were preferred (AP abandoned all other models) but Caligraphs were also used. 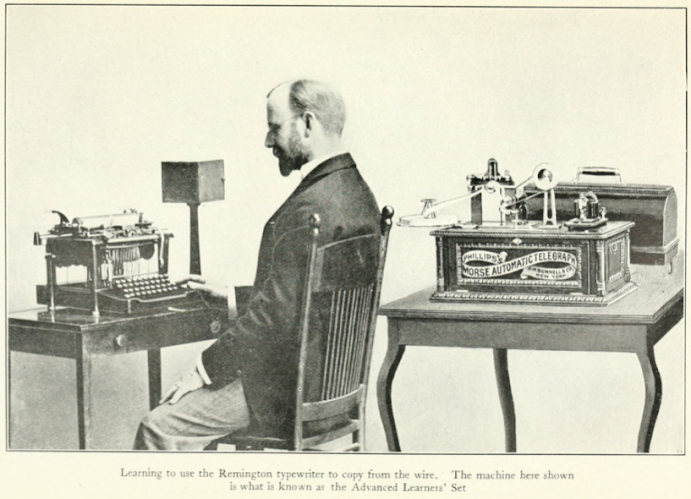 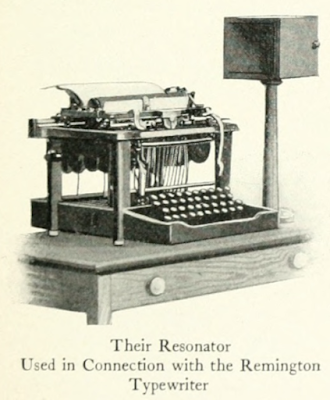 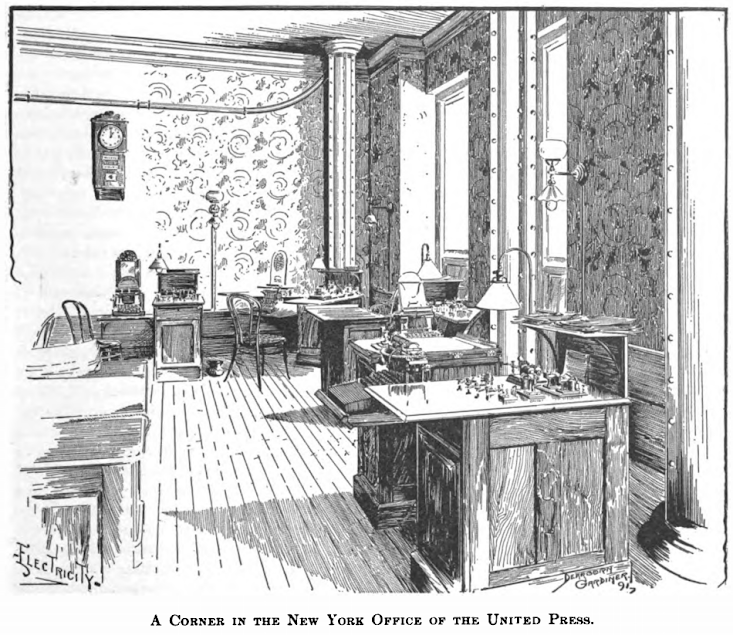 Note the Caligraph
Samuel John Pryor, the author of this article, was from 1918-20 the first Press Secretary for the British Royal Family at Buckingham Palace. Pryor was born in Clifton, Derbyshire, England, in 1865 and started work at 16 as a telegraph clerk himself, in Wakefield, Yorkshire. Seeking journalism work, he went to the West Indies and at 24 was editor of the Gleaner in Kingston, Jamaica. He moved to the US in 1889 and returned to England in 1896. After working for, and editing, leading newspapers in America (including the New York Sun in 1894) and Britain, and covering the Boer War, his newspaper career ended as day editor and a director at The Times of London (1909-18). He had been managing editor and a director of the London Daily Mail from 1896-1900, then moved to the Daily Express and from 1904-05 was editor of the St James Gazette and Evening Standard. In 1907 Pryor was editor of the brilliant but short-lived Liberal daily the Tribune. He died in 1924. 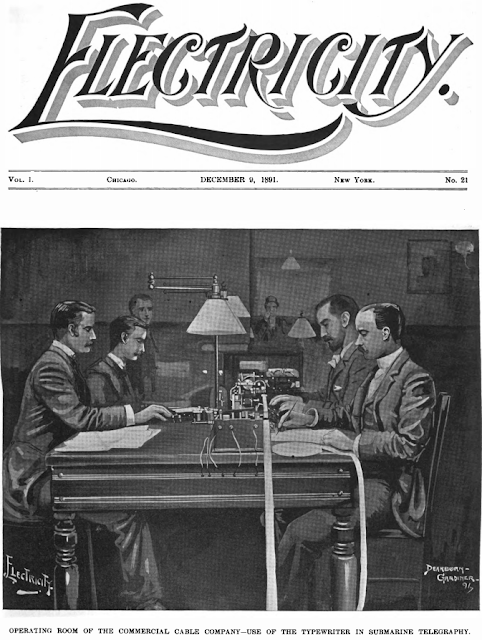 The Commercial Cable Company, whose operators are shown on the front cover of  this issue of Electricity, introduced 100 typewriters to its New York office in February 1891. It paid employees an extra $1 a week to learn to use them proficiently. The CCC was founded in New York in 1884 by Irish-American industrialist John William Mackay and New York Herald publisher James Gordon Bennett Jr. The technology CCC used was already well established. It laid cables from Waterville in Ireland to Canso, Nova Scotia. Submarine connections from Waterville to Weston-super-Mare in England and Le Havre in France were soon established after initial use of landlines from Waterville to mainland Britain. In the US CCC distributed its cable traffic through its partner firm the Postal Telegraph Company. 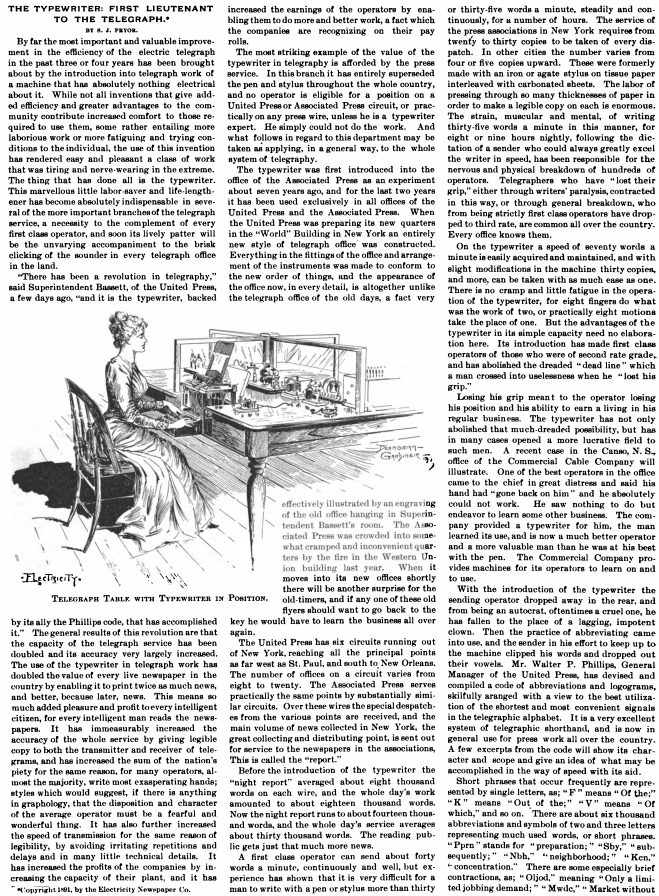 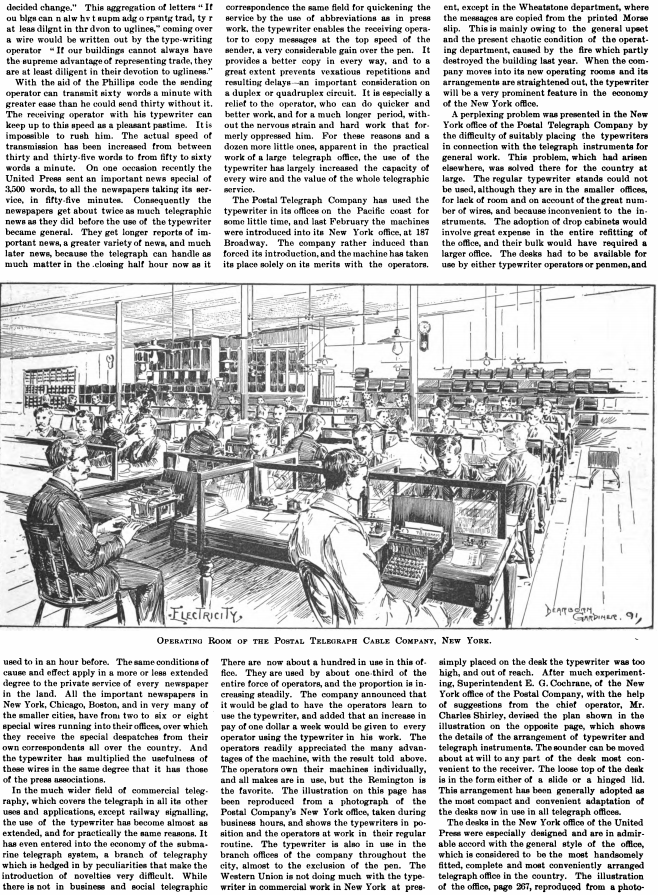 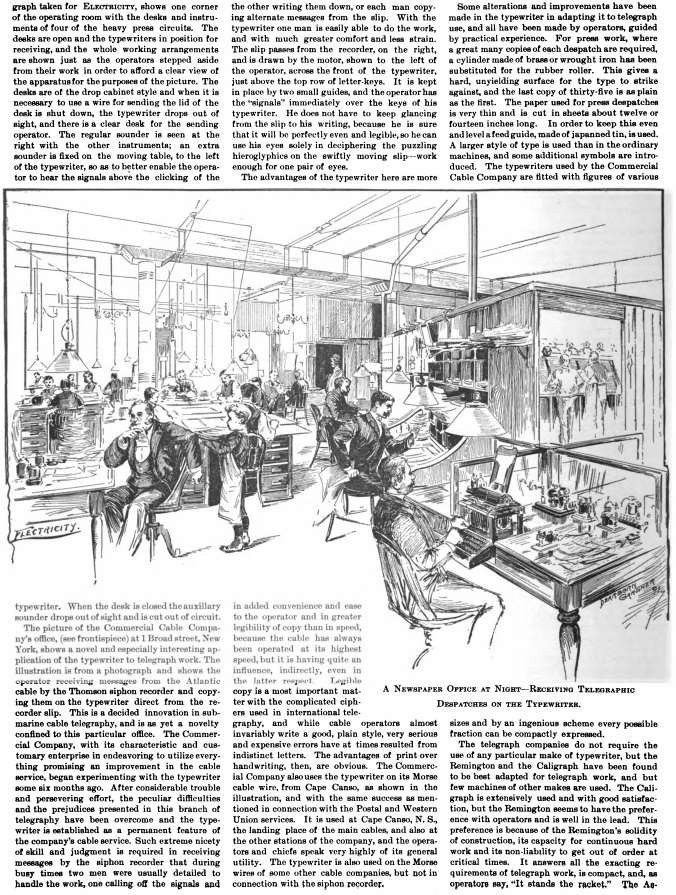 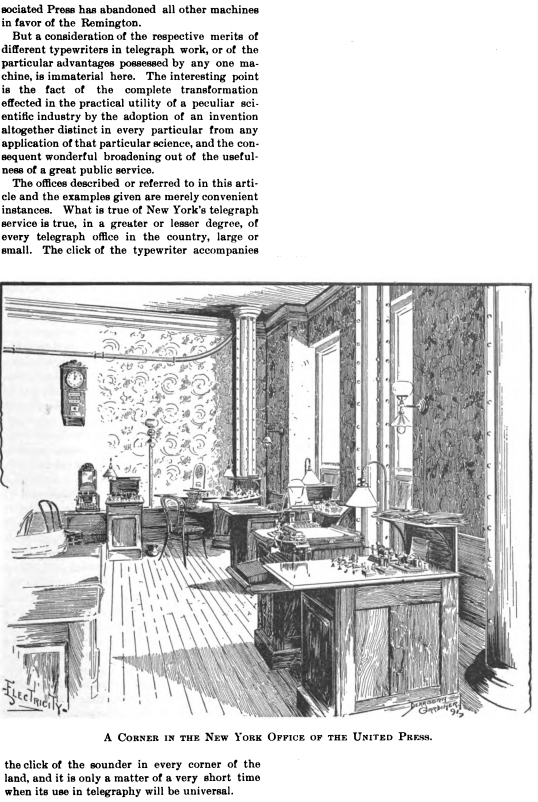 And then there was the typewriter in the dental surgery!? 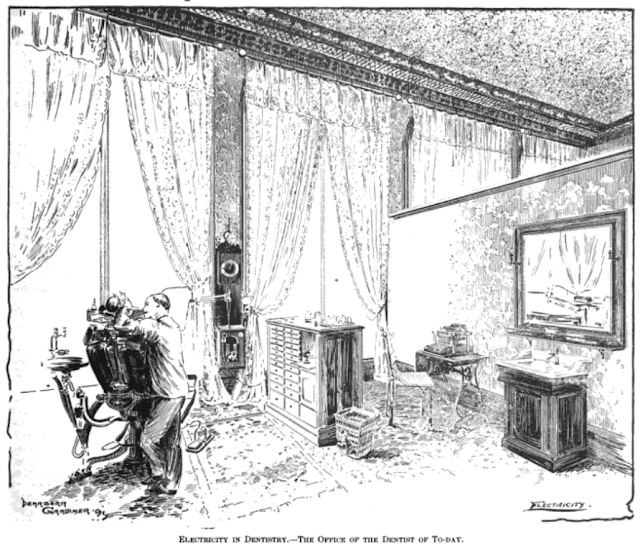 Excellent Robert!
Did you consider submitting an article such as this to QST Magazine at the A.R.R.L.? It may be quite interesting to amateur radio operators, as it is to me (AI4WM) since many still use Morse Code and copy on a Mill or PC. for others it is a nice piece of history.
Mechanical typewriters with telegraphy eventually led to the teletype from what I've been told.