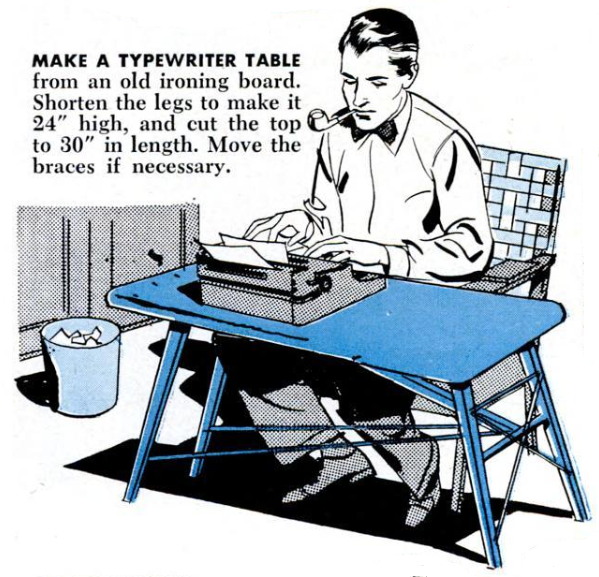 Popular Science, January 1956
I felt inspired and, in more ways than one, deeply moved by Ryan Adney’s touching blog post from last week, “TI-99/4A Play-and-Display”. My own father lived to the age of 73, the age I am now. I was 33 when he died, after a series of strokes in 1981, and while this situation was very different from Ryan’s, I had little idea at the time of my dad’s passing just how much it would affect me in the 40 intervening years. I miss him more every day. My paternal grandfather, also Robert Messenger, died suddenly from an aneurysm in October 1919, leaving my father, then aged just 12 years and two months old, the eldest male still living at home with his family. His eldest brother had died from wounds suffered in the Battle of Ypres in 1917, the next two were both serving in the merchant navy and the fourth, Robert Rex Messenger, had died from blood poisoning as a child. So my father had to leave school and find work to support his widowed mother, younger sister and three younger brothers. His great wish was to become a carpenter, but he was eventually found work (by an elder sister) as an apprentice tailor. He made a huge success of a career thrust upon him, yet not once in his subsequent life did he let go of his passion for carpentry. His skills as a home handy man were amazing. Among the many things I’d seen him build was a beautiful desk for me when he gave me an Underwood Champion portable typewriter back in 1957. 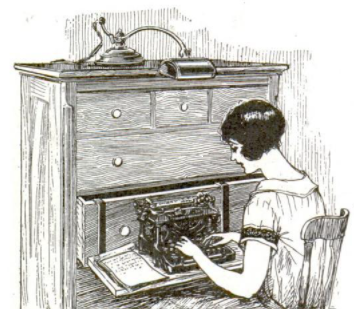 It was with this in mind that I was reminded - upon reading Ryan’s post about building a cabinet to house a TI computer in memory of his dad - to go back and look at Popular Mechanics magazines with plans for a typewriter desk. Popular Science and Popular Mechanics offered a lot of ideas for such things, over many years, and my father had also built 14ft sailing boats following plans published in these magazines. Plans for a typewriter desk that I glimpsed a week or so ago and which had appealed to me appeared in the March 1952 edition of Popular Mechanics. When I first saw it, I very quickly moved  on to something else for a blog post idea, thinking this would be way beyond my own range of carpentry skills – as much as I was able to learn from my late dad (high school carpentry lessons were completely wasted on me). My father, of course, would have had no problem making such a thing. But now, after reading Ryan’s post, I’m having second thoughts. My wife’s first husband, who died many years ago, was a carpentry teacher, and I’ve “inherited” most of his tools. Armed with these, I just might be up for the challenge. And with the first blasts of winter arriving today, it’s probably a good time to start thinking about working inside my shed. If this one proves beyond me, I can always try something a little simpler from among the earlier plans outlined here. Something rustic, perhaps? 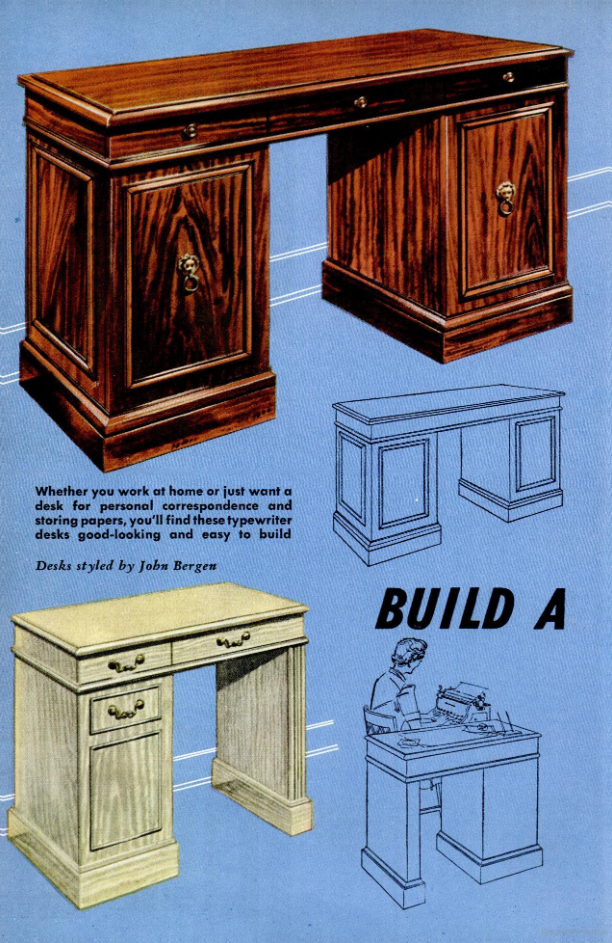 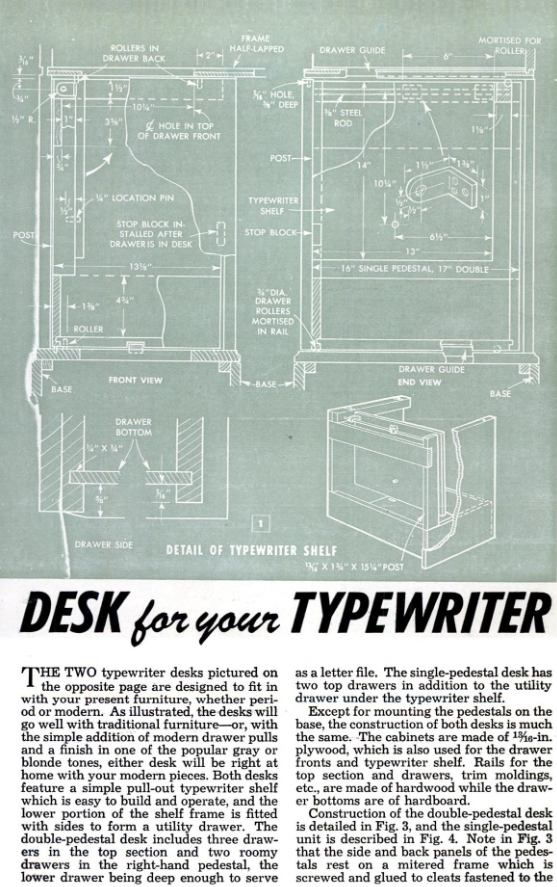 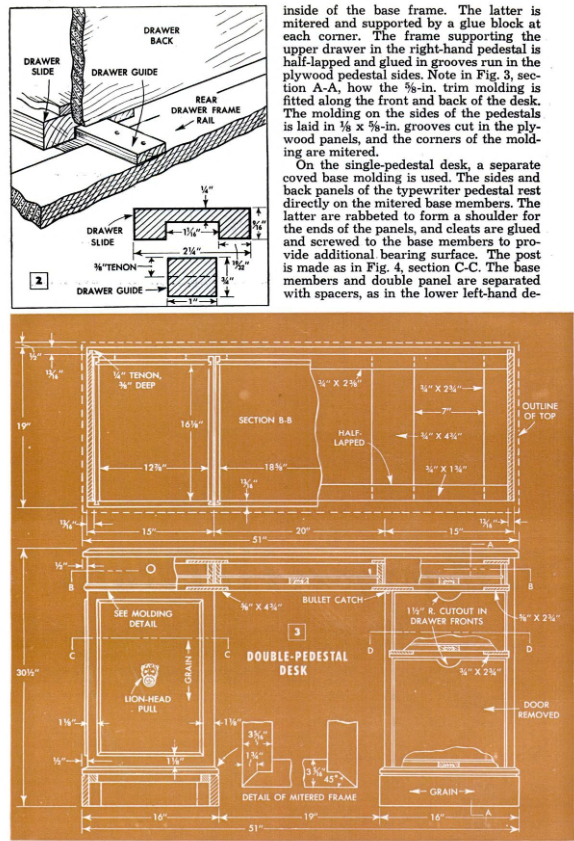 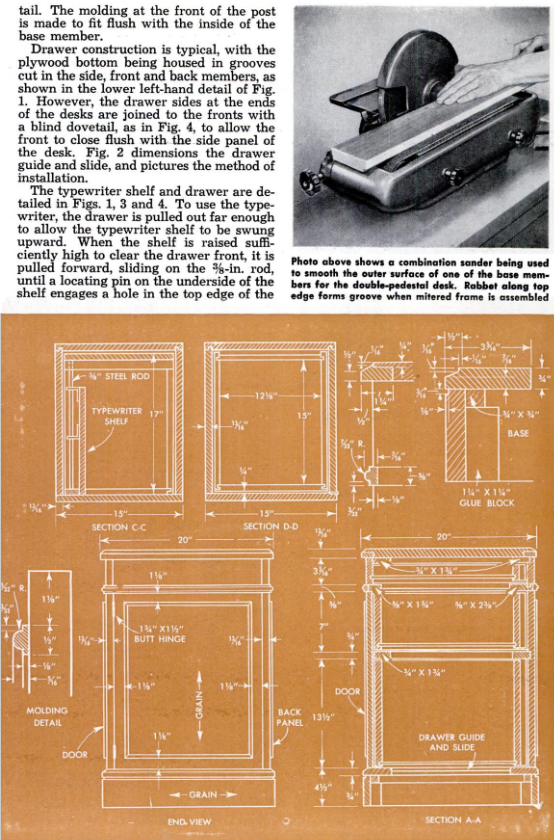 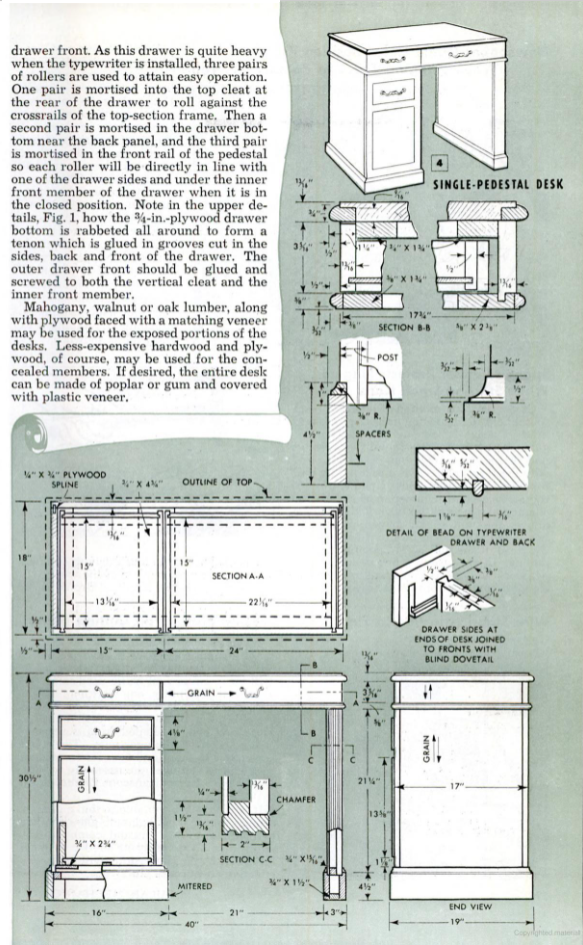 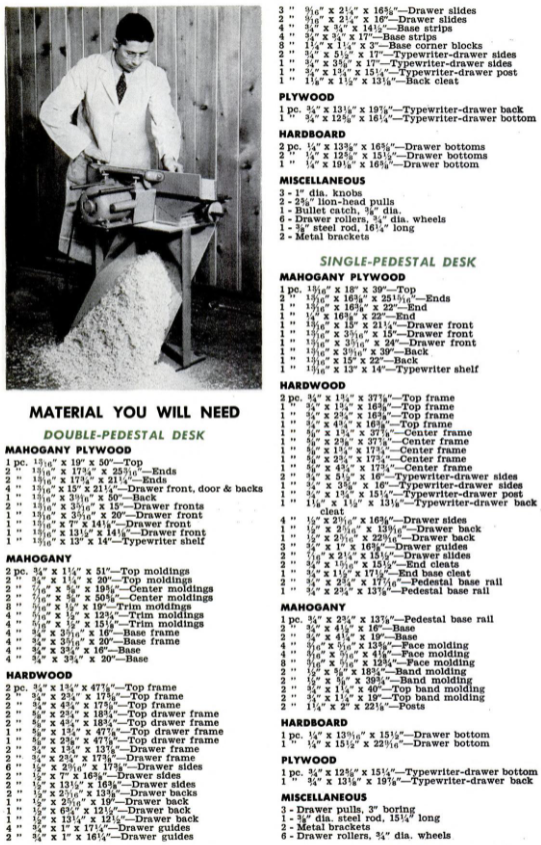 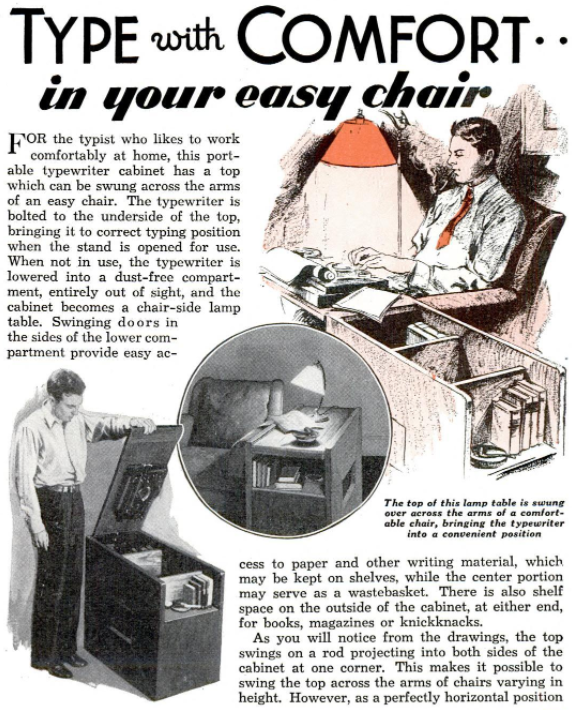 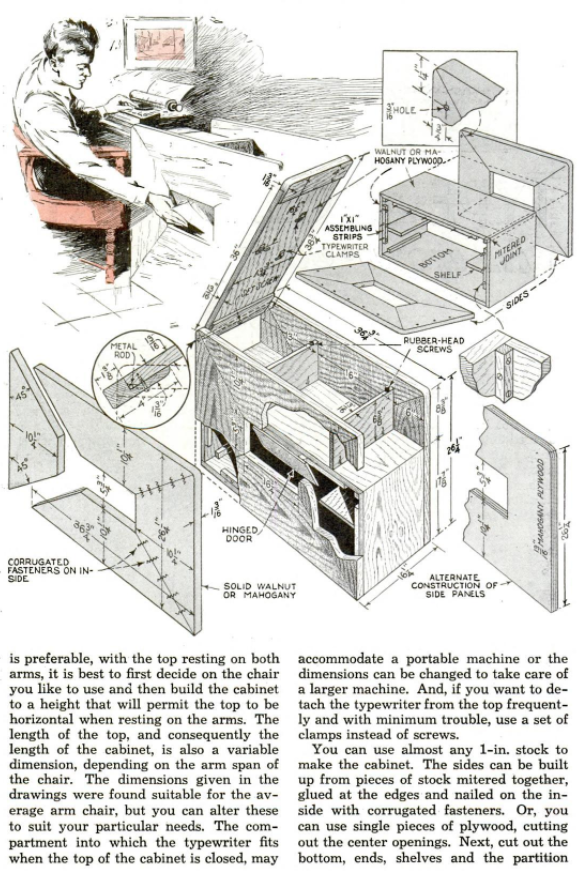 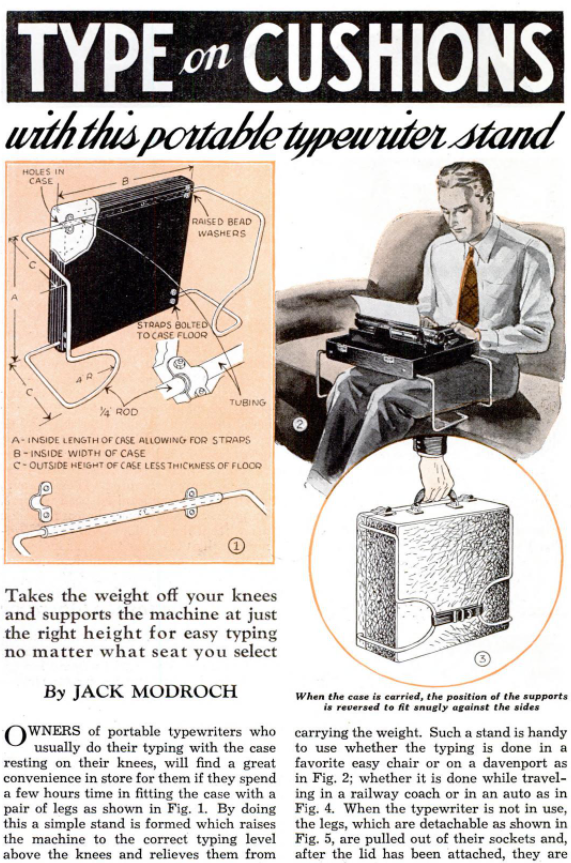 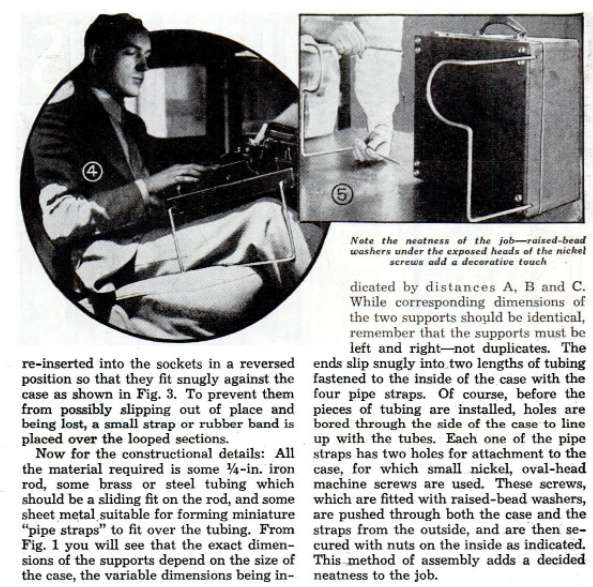 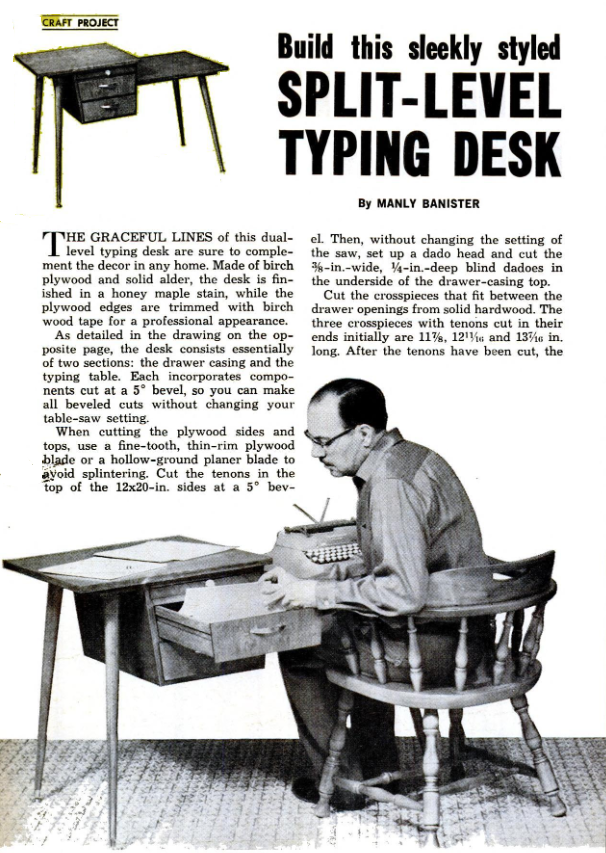 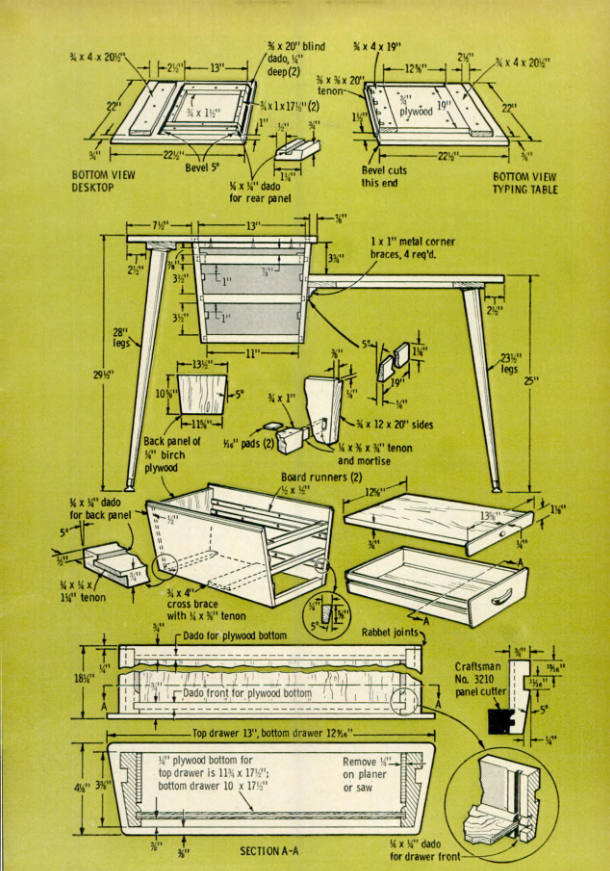 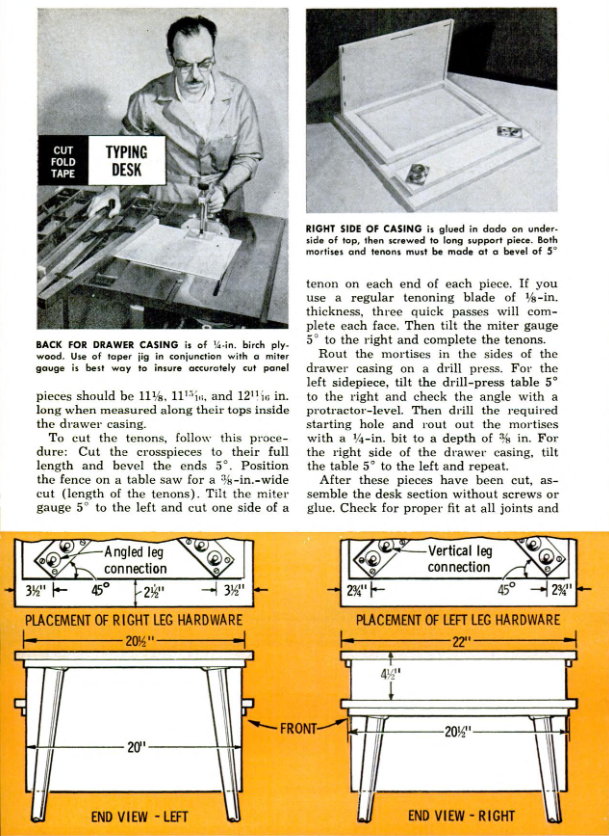 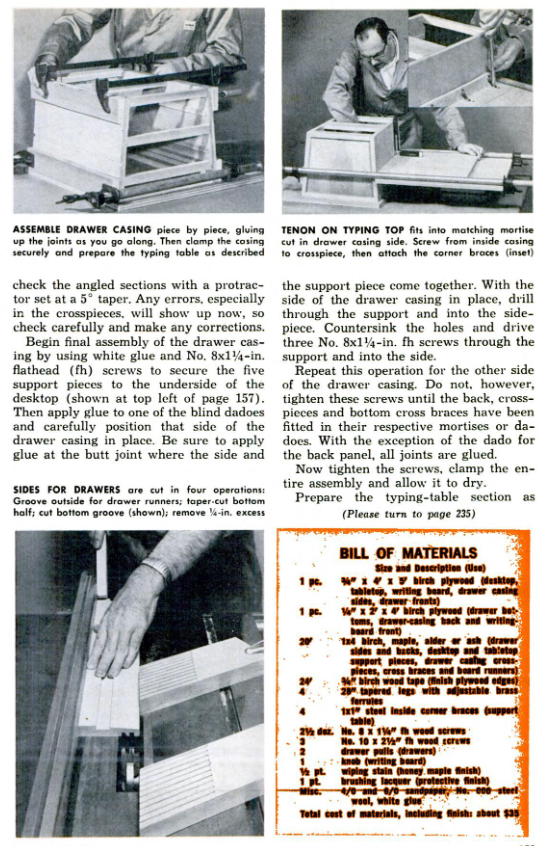 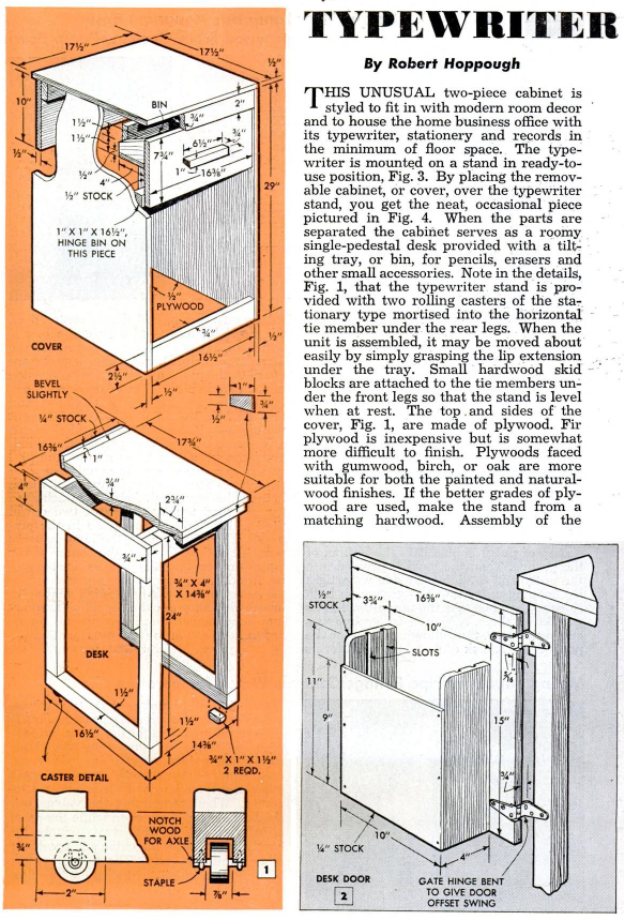 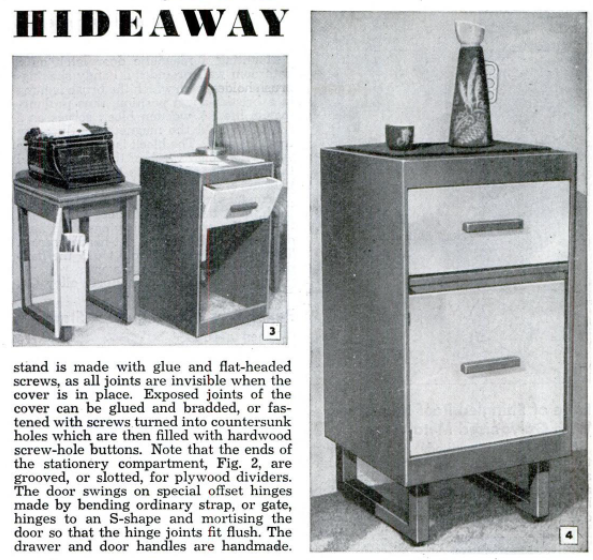 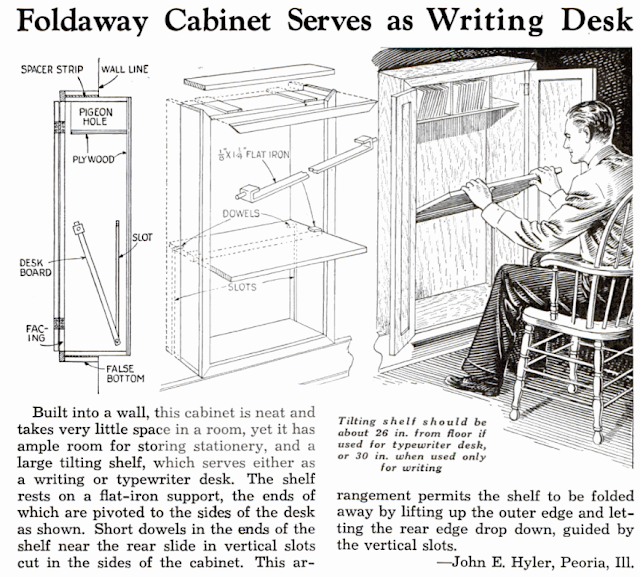 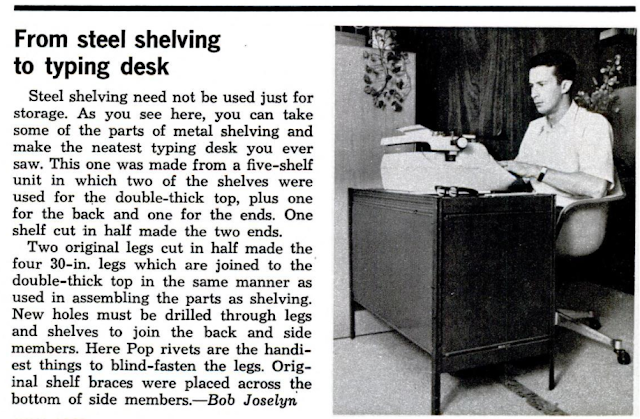 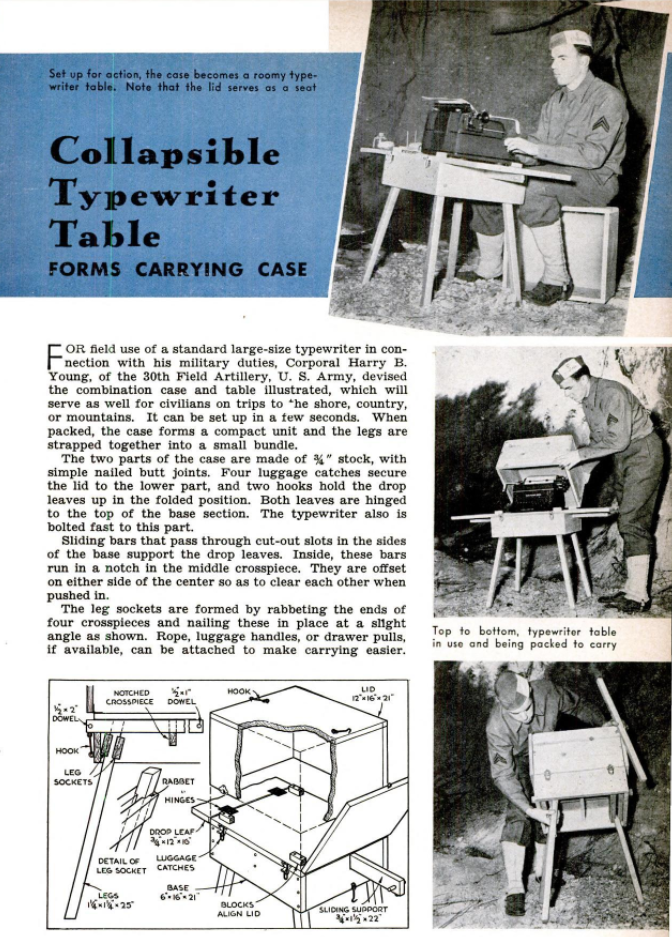 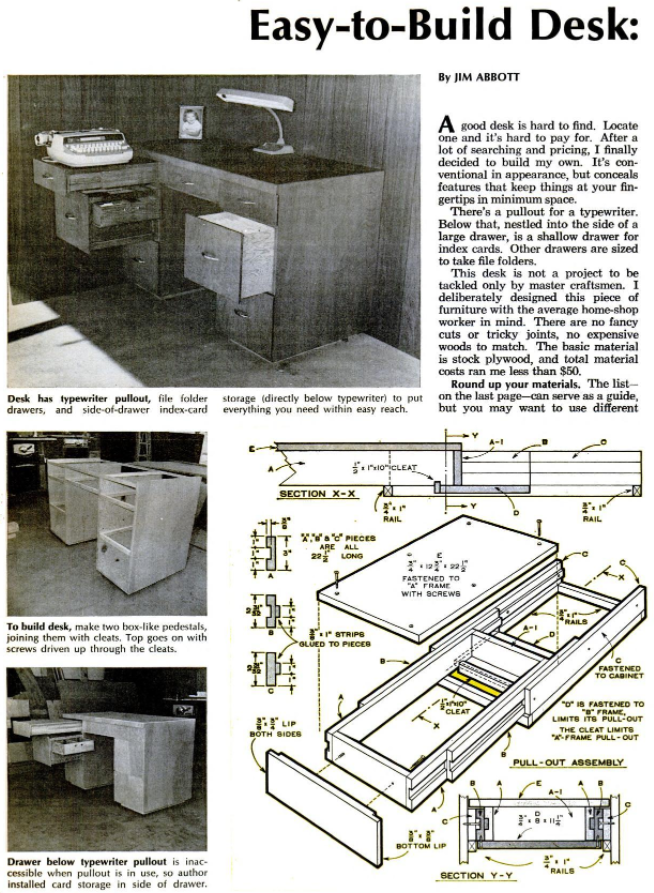 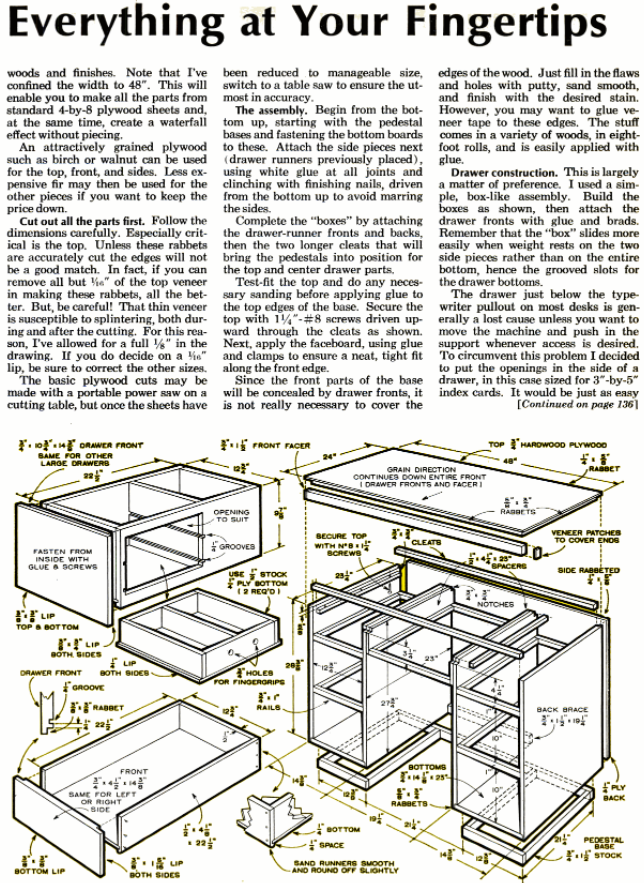 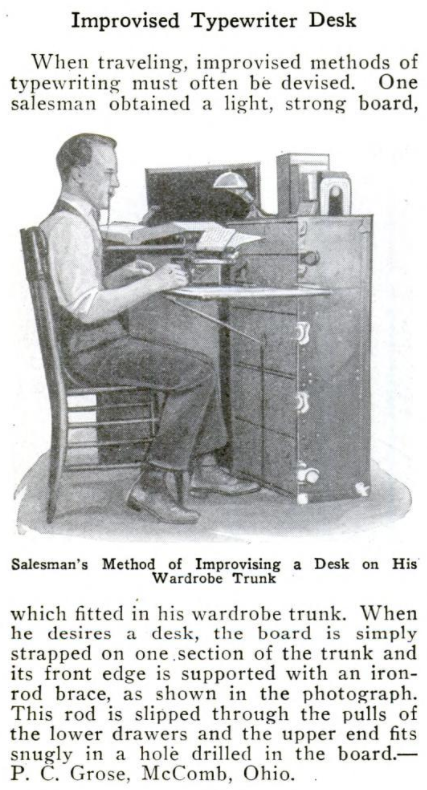 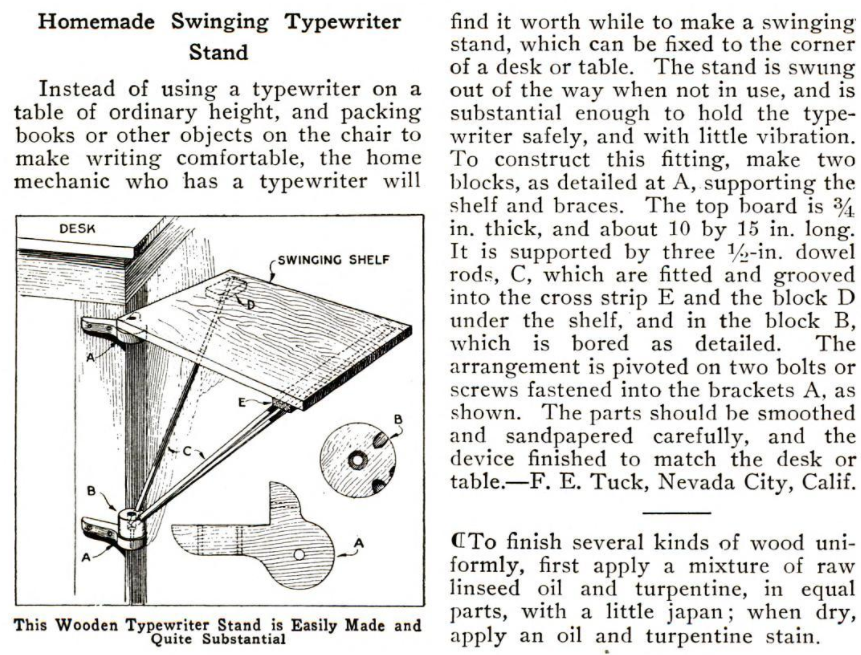 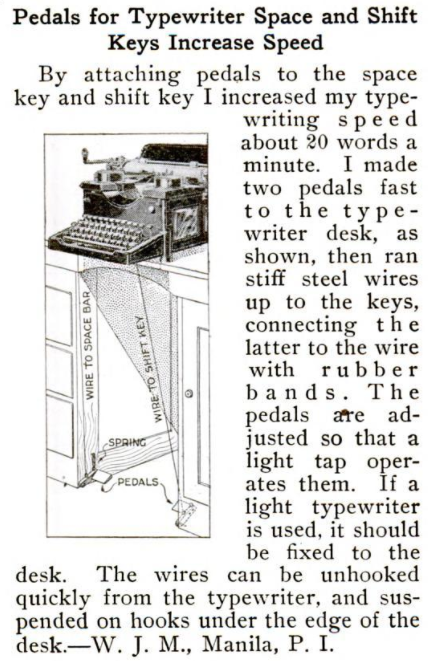 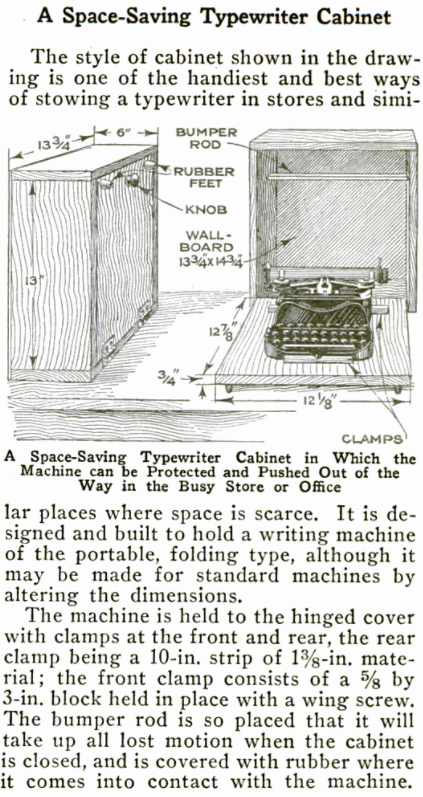 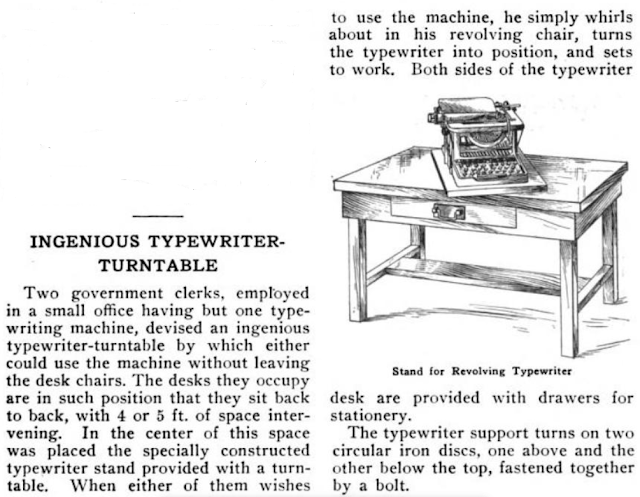 Posted by Robert Messenger at 10:14

That is quite a selection of plans for some fine typewriter tables. If only ironing boards were still made of wood, that method would be great for type-ins and remote location typing.
thanks for sharing all the plans, Robert.

So many ideas ... I love the idea of pedals for the space bar and shift! Seems a little silly, but maybe it would work beautifully once you get used to it.

I'm amazed at how many of these designs involve bolting the typewriter to a surface and swinging it every which way, even storing it upside down. I'm hearing the thunk of a lot of loose carriages flying to their far margins.

You are a crafty type!

Now, I'll be able to commission a table for my typewriters!! :D
Thanks for the post!! <3

Hi Mr. Messenger, You could try for something less complicated. I have posted the instructions for a typewriter stand that I use every day here: https://buildingdesks.blogspot.com/2014/04/typewriter-or-laptop-stand-part-1.html. It doubles as a back saver book stand for the bedroom, when I read sat on the side of the bed.