Let's look on the bright side: The broad, almost unanimous reaction to the Mumbai typewriter factory imbroglio has brought typospherians closer together, united in a cause. We stand tighter, shoulder-to-shoulder, against one common enemy: typewriter ignorance. I have read Ryan's blogs and reacted accordingly, writing to the Herald and pointing out a few facts of life. Yesterday I devoted my column in The Canberra Times to this furore. My prose may be, like this text, a little purple, but the sentiments are nonetheless there, cast from the heart. Not quite a typecast, I know, but close. Below it are the words I TYPED (albeit on a USB typewriter, forgive me). For anyone wanting to access a PDF of the column, it can be found at http://10.254.1.214/_Archive/ACT/CANBERRATIMES/2011/04/29/cttt00229.pdf 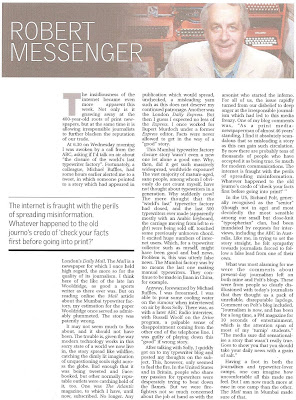 The insidiousness of the internet became even more apparent this week. Not only is it gnawing away at the 400-year-old roots of print newspapers, but at the same time it is allowing irresponsible journalists to further blacken the reputation of our trade.
At 6.30 on Wednesday morning I was awoken by a call from the ABC, asking if I’d talk on air about “the closure of the world’s last typewriter factory”. Fortunately, a colleague, Michael Ruffles, had some hours earlier alerted me to a tweet, in which someone pointed to a story which had appeared in London’s Daily Mail. The Mail is a newspaper for which I once held high regard, the more so for the quality of its journalism. I think here of the like of the late Ian Wooldridge, as good a sports writer as there ever was. But on reading online the Mail article about the Mumbai typewriter factory, my estimation for the paper Wooldridge once served so admirably plummeted. The story was patently wrong.
It may not seem much to fuss about, and it should not have been. The trouble is, given the way modern technology works in this sorry state of a world we now live in, the story spread like wildfire, catching the dimly-lit imagination of unquestioning souls right across the globe. Bad enough that it was being tweeted and Facebooked, but other normally reputable outlets were catching hold of it, too. One was The Atlantic magazine, to which I have, until now, subscribed. No longer. Any publication which would spread, unchecked, a misleading yarn such as this does not deserve my continued patronage. Another was the London Daily Express. But then I guess I expected no less of the Express. I once worked for Rupert Murdoch under a former Express editor. Facts were never allowed to get in the way of a “good” story.
This Mumbai typewriter factory closure story wasn’t even a good one. Why, then, did it get such massively widespread, worldwide exposure? The vast majority of mature-aged, sane people, among whom I obviously do not count myself, have not thought about typewriters in a generation. Why suddenly now? The mere thought that the “world’s last” typewriter factory had closed, and the last 500 typewriters ever made (apparently mostly with an Arabic keyboard, the carriage moving from left to right) were being sold off, touched some previously unknown chord. It excited huge numbers of internet users. Which, for a typewriter collector such as myself, might have been good and bad news. Problem is, this was utterly false news. The Mumbai factory was by no means the last one making manual typewriters. They continue to be made in Jinan in China, for example.
Anyway, forewarned by Michael Ruffles, I was forearmed. I was able to pour some cooling water on the rumour when interviewed on air by Ross Solly. There was, as with a later ABC Radio interview, with Russell Woolf on the Drive program, a palpable sense of disappointment coming from the other end of the telephone line. I was guilty of playing down this “good” if wrong story.
After talking with Solly, I quickly got on to my typewriter blog and posted my thoughts on the subject. This, however, only seemed to fuel the fire. In the US and in Britain, people who share my passion for typewriters were desperately trying to beat down the flames. But we were firefighters not so much concerned about the job at hand as with the arsonist who started the inferno. For all of us, the issue rapidly turned from our disbelief to deep anger at the irresponsible journalism which had led to this media frenzy.
One of my blog comments was, “As a print media-newspaperman of almost 46 years' standing, I find it absolutely scandalous that so misleading a story as this can gain such circulation. By now there are probably tens of thousands of people who have accepted it as being true. So much for modern communications. The internet is fraught with the perils of spreading misinformation. Whatever happened to the old journo's credo of ‘check your facts first before going into print?”
In the US, Richard Polt, generally recognised as the “senior” (though not in age) and most decidedly the most sensible among our small but close-knit “typospherian” clan, had been inundated by requests for interviews, including the ABC in Australia. Like me, in trying to set the story straight, he felt sympathy toward journalists forced to follow a false lead from one of their own.
What was most alarming for me were the comments about present-day journalism left on both mine and Richard Polt’s blogs. These were from people so clearly disillusioned with today’s journalists that they thought us a pack of unreliable, disreputable lapdogs. Comment on Polt’s blog included, “Journalism is now, and has been for a long time, a PM magazine for 10 seconds of entertainment, which is the attention span of most of my ‘turnip’ students.” “The media sure did sensationalise a story that wasn't really true. Goes to show you that you should take your daily news with a grain of salt.”
Having a foot in both the journalism and typewriter-lover camps, one can imagine how uncomfortable all this made me feel. But I am now much more at ease in one camp than the other. The Mail man in Mumbai made sure of that.
Posted by Robert Messenger at 11:21

Thanks for calling me sensible. I've made my share of snap judgments and baseless comments in my day.

One thing I've learned from this experience is that corporations often seem to create the news. Godrej got the ball rolling. Then Swintec chimed in, and got its own share of unusual media attention. But very few journalists bothered to do independent fact-checking on the topic, even though it is so easy to do these days, either in the initial "the typewriter is dead" phase of the story or in the second wave of "no, it's not" stories. Almost everyone is simply repeating the statements put out by these two companies, and parroting formulations by other journalists.

What cheers me about this episode is that there is a lot of fondness out there for typewriters -- both for the experience of using them and for their cultural and historical meanings. I'm sure that a number of people, having read some article or two in this "news" cycle, will decide to seek out a writing machine.