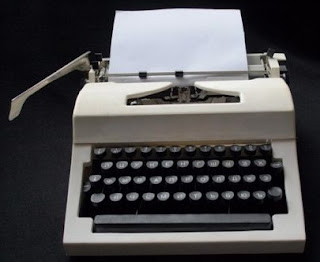 Many may by now be aware of a story making the rounds - on the internet, on blogs and on Facebook and Twitter - that the world's last manual typewriters have been made and the factory, in India, has been closed down. According to the story, only about 500 typewriters remain to be sold, most of them in the Arabic language. I am led to believe the machine pictured above is one of the Indian-made models. Please let me know if this is not the case. I have never seen one, so I wouldn't know.
Let me say from the outset that this claim seems dubious, because to the best of my knowledge manual portable typewriters continue to be made in China. Maybe someone can confirm this? Or enlighten me if the end of the line with models such as the Rover, Generation, Olivetti-Royal, Olympia Traveller C et al has already been reached.
I was just about to leave work at around midnight last night when a colleague drew my attention to a site (http://dvice.com/archives/2011/04/say-goodbye-to.php) which was making the claim about the Indian factory. It appears that this post had been lifted from The Atlantic magazine's website (http://www.theatlantic.com/technology/archive/2011/04/last-typewriter-factory-in-the-world-shuts-its-doors/237838/) and in turn had originated from London's Daily Mail newspaper. The story on the Daily Mail's website is headed: "The end of the line: Last typewriter factory left in the world closes its doors" By Daily Mail Reporter. Last updated at 6:10 PM on 26th April 2011. The page can be found at http://www.dailymail.co.uk/sciencetech/article-1380383/Godrej-Boyce-Worlds-typewriter-factory-closes-doors-Mumbai.html
The story starts: "India-based company has just a few hundred machines left in stock. It's an invention that revolutionised the way we work, becoming an essential piece of office equipment for the best part of a century. But after years of sterling service, that bane for secretaries has reached the end of the line. Godrej and Boyce - the last company left in the world that was still manufacturing typewriters - has shut down its production plant in Mumbai, India,  with just a few hundred machines left in stock. Although typewriters became obsolete years ago in the west, they were still common in India - until recently. Demand for the machines has sunk in the last 10 years as consumers switch to computers. The company's general manager, Milind Dukle, told India's Business Standard newspaper: 'We are not getting many orders now. From the early 2000s onwards, computers started dominating. All the manufacturers of office typewriters stopped production, except us. Till 2009, we used to produce 10,000 to 12,000 machines a year. But this might be the last chance for typewriter lovers. Now, our primary market is among the defence agencies, courts and government offices.' The company is now down to its last 200 machines - the majority of which are Arabic language models. The firm began production in the 1950s - when Prime Minister Jawaharlal Nehru described the typewriter as 'a symbol of India's emerging independence and industrialisation'. It was still selling 50,000 models annually in the early 1990s, but last year it sold less than 800 machines. The first commercial typewriter was produced in the US in 1867 and by the turn of the century had developed into the standardised format - including a qwerty keyboard - that we know today."
As you can see, there is at least one very basic fact in there that the newspapers, magazines and websites have got wrong, but as to the claim about these being the last "new" typewriters left in the world, I have, as I said, reservations. Only last weekend a Rover went on sale on eBay in Australia, and the seller indicated it had been bought new earlier this year.
But many will be aware of just how quickly - especially in these days of supposedly rapid worldwide communications - stories, false or otherwise, can spread and become entrenched in people's minds as accepted wisdom. At 6.30 this morning, I was awoken by ABC Radio to be interviewed live on air about the Mumbai typewriter story - the interviewer, of course, presuming it to be correct.
Regardless of whether the story about these being the last "new" typewriters available for sale is right or wrong, I'd still like to buy one of the Indian-made machines. I do have "brand new", never-been-used manual portables made in China, including the Olivetti and the much-classier Olympia. But I have failed in the past to even track down a site from which one can buy one of the Indian machines online. Again, I'd like to be enlightened on this, if anyone knows how to buy one.
Let me just end by saying that this morning's experiences, of first being interviewed on radio on the subject, and then trying to post something about the Mumbai typewriters on this blog, has been most interesting. Australia is most definitely "Third World" when it comes to modern communications. Here we suffer because for far too long the Government allowed one company, Telstra, to monopolise telecommunication services - telephone and internet. Although Telstra now has some competition, it continues to under-perform in an appalling way; its services leave a great deal to be desired. As of yesterday, my broadband internet connection has slowed to less than a snail's pace. It has taken me the best part of an hour to get on to my blog to post this item. All the while, I was thinking back to the days when, as a journalist travelling the world covering major events, I used a manual portable typewriter and a landline telephone. Back then, I would have been able to write and file to wire services a story like this probably a dozen times over in the time it took me to post it on the internet. Advances in communications? Give me a break ...

Posted by Robert Messenger at 08:14

Hi Robert, in a search for Olympia-related info, I came upon this: http://www.olympiaph.com.ph/crm/typewriters.html and wondered if these were Chinese or Indian in origin?

Hi Rob. The Traveller De Luxe (Traveller C) is the one I have, and it's made in China (and still being made and sold, as far as I know). Following various markings on the carton, mine appeared to have been imported into Mexico, then on to the US, then shipped from there to Australia. The Carina 3 and SG3 look to me to be "new-old" stock - I very much doubt these are still being made, especially in this design. As far as I know, the Traveller design is distinct to the Chinese manufacturers; the last of the Olympias made in Japan were the "Olympiettes".

To the best of my knowledge, the designs of the machines produced by that Indian factory were distinct to that manufacturer - in other words, they were not making typewriters for Olivetti-Royal or Olympia, and other models (Rover etc) with different outer casings, as the Chinese manuifacturers are/were. I quite like the Olympia, but would advise anyone to steer well clear of the others, most especially the Olivetti. It's had some woeful reviews, and looks awful.

It's funny how certain news stories spread like wildfire. According to Google News, there are now over 100 current stories on this topic. The first wave was all about the end of an era, and the second wave is about debunking the first wave. Many articles have pointed out that electronic typewriters are still being made by Swintec (and, I think, other manufacturers as well). I have pointed out when I can that, as you say, Robert, manual portables are still made in China and Taiwan. Here are at least two web sites for these manufacturers that appear to be active businesses:

Still, the end of Godrej manual standards is a sad landmark, and the writing is on the wall for mechanical typewriters in general.

I think the last picture you show is a Godrej. The one at the top looks like an Ortekh, a miserable Russian portable from the '80s or '90s, as hideous as its name. (I know, I own one.)

I've now been interviewed on this topic by an NPR show (The Takeaway), CBS Radio, and a newspaper. I also got requests from the BBC and yes, Australian Broadcasting Corp., but I don't know whether time differences will allow me to speak to them. This is the most attention I've gotten as a typewriter expert since the Bush memo story. Fortunately there isn't partisanship and rancor associated with this story!

I believe I've read that the Godrej was a modification of an Optima design.

My understanding is the mechanism of the Chinese machines are all of what was originally a Brother (Japanese) design. Just the outer casings differ, by and large. But Will Davis is the expert in this field. His site covers Chinese-made machines extensively, but as far as I know not Indian-made machines.

Thanks Richard. I now see London's Express newspaper website has the story, too, written by an Ed Riley. Gee, all this fuss over "obsolete" typewriters? They had to come to an (alleged) "end" before the world starting sitting up and taking notice! What bittersweet irony ...

... and it's even more ironic that this comes after news stories about how manual typewriters are being discovered and cherished by young people.

Hate to sound materialistic here, but does this sudden burst of worldwide publicity mean the value of old typewriters ("There's no more being made .. get one while you can") has just gone through the roof?

There is an upside to all this. No sooner does one go on air talking typewriters than the phone starts ringing. "I heard you on the radio this morning ... Can you give a good home to granddad's old Remington?" Thanks to the rumour-mongerers, I will soon have a "new" clanker in the collection. Cheers ...

One last "groan" on the subject - I promise I'll button up and go away after this: As a print media-newspaperman of almost 46 years' standing, I find it absolutely scandalous that so misleading a story as this can gain such rapid and massively widespread worldwide circulation. By now there are probably tens of thousands of people who have accepted it as being true. So much for "modern technology" and communications. The internet is fraught with the perils of spreading misinformation. It's a sad reflection on the sorry state of the world we live in. Whatever happened to the old journo's credo of "check your facts first before going into print"? Obviously it's been superseded by "never let the facts get in the way of a good story". It's not even a good story ...

With every "The Typewriter is Dead" story that's run I can hear the wheezy laugh of some technology slave chiding those few who hold on to typewriters as "backwards" and "out of step." Well, über nerd, the joke is on you. Your computer will never ever make the century mark. It won't make it 50 years. It will be a pile of junk in 25 years. While you are in line for the next gadget with its included false sense of freedom, I'm going to be living life.

Well said,Ryan! (Oops, I promised to button up!)

@Ted
I think that conservation is anathema to the digital mind. You, my friend, are a freakishly rare gem.

@Robert Messenger
I love the commentary. It's letting me pull out my grumbly old man face; something my wife adores!

@Robert
I found a website where you can order one (actually, minimum order is 10) of the last remaining Godreji (:

I noticed that in the Phillipines there are still three Olympia models available: The SG3, the Carina 3 and the Traveller de Luxe. When I lived in the Phillipines 18 years ago these were still available in retail shops. At the timelarge areas did not have electricity. I have not been back since 2001 so do not know the current situation in regards to electricity.