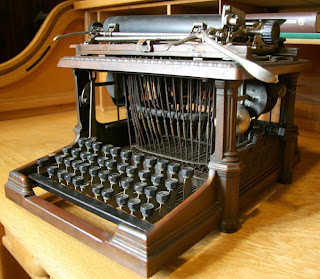 The Collier's magazine of January 2, 1904, arrived in my mail today. Only 107 years and three months late, but still, at least it got here, unlike my Christmas card to Will Davis, which made the return trip. In Collier's is this advertisement:

Let's start from the right, with Mr McClintic. In these clippings from US newspapers of the period, it is clear to see he was one brilliant typist: 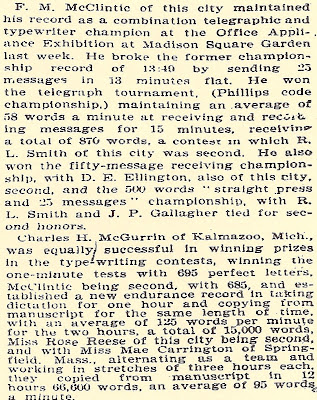 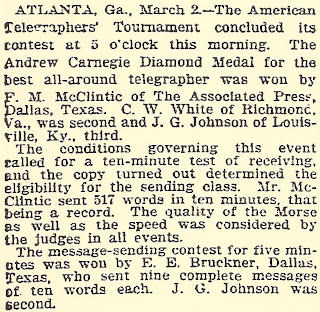 According to The Story of Telecommunications (1992), written by George P. Oslin, a reporter and executive at

ext Mr McGurrin. I'm assuming he's a younger brother of the great Frank Edward McGurrin - he was certainly mentioned in F.E.McGurrin dispatches. Not a lot is known about Charles H.McGurrin, but Wikipedia tells us that Frank Edward McGurrin "invented Touch Typing in 1878. He was a court stenographer at Salt Lake City who taught typing classes. He taught himself to touch type without looking at the keys ... On July 25, 1888, McGurrin, who was purportedly the only person using touch typing at the time, won a decisive victory over Louis Traub [operating a Caligraph with eight-finger method] in a typing contest held in Cincinnati. The results were displayed on the front pages of many newspapers. McGurrin won $500 and popularised the new typing method. Whether McGurrin was actually the first person to touch type, or simply the first to be popularly noticed, is disputed. Speeds attained by other typists in other typing competitions at the time suggest that they must have been using similar systems."

(The reference to the "Formerly, the ' - Sho", by the way, is to the Rem-Sho, but that's another story. Suffice to say here that an earlier ad, in The Kansas City Journal on June 28, 1899, says, "THE REM-SHO, USED EXCLUSIVELY BY Charles H. McGurrin of Kalamazoo, Mich., World's Champion Speed Type-writer Operator; also, Harry V. Emanuel of Philadelphia, World's Champion Speed Telegrapher. WHY? BECAUSE IT IS THE BEST. Universal Keyboard, Lightest Touch, Speed, Strength.") 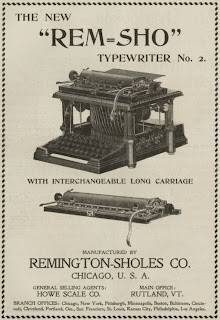 Finally, the sad tale of what befall Harry Victor Emanuel after his glory days behind a Fay-Sholes. The Pennsburg Town and Country of Saturday, November 19, 1904, reported: "FREES MAN FROM JAIL. Harry Victor EMANUEL, the expert telegrapher, was released from jail, at Norristown, shortly after 4 o'clock Saturday afternoon. He was sentenced on October 10 to 30 days and $500 fine for his connection with the West Manayunk pool room. His sentence expired on Thursday, but as the fine was not paid he was not released. Saturday afternoon a woman dressed in black appeared and produced the necessary amount to secure EMANUEL's release. The attorneys for the telegraph operator refused to divulge her name, but intimated that she was a close friend and had saved the money herself to secure his release. EMANUEL and his friend left for Philadelphia at 5 o'clock that same afternoon."

Well, at least he had one good friend left in the world ... but it makes one wonder what happened in that pool room!

Happy typing on your Fay-Sholes, if you can afford one: 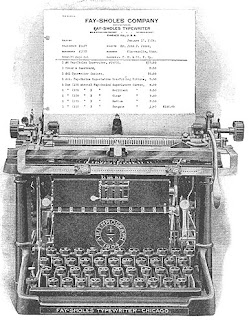 Speaking of Rem, also in the same issue of Collier's was this opposing and rather demanding little ad: 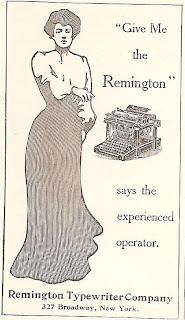 PS: I have just now come across this reference to the McGurrins as brothers in a 1921 paper called “Making Shorthand Teaching Effective” by John Robert Gregg.
TYPEWRITING PRINCIPLES
Now as to typewriting: It is not so very long ago that there was absolutely no real method employed in the teaching of typewriting. The student was seated at the machine, and the operation of the space bar and the shift-key was explained to him. He was told to use the left hand for the letters on the left-hand side of the keyboard, the right hand for the letters on the right-hand side, and the thumb for the space bar. With these general directions he was left to shift for himself. Even at that time there were a few touch operators, such as Mr Frank McGurrin and his brother, Charles H. McGurrin, who gave demonstrations not only in this country but all over the world. These phenomenal writers, who could use the machine without looking at the keys, were able to write at the marvelous speed of over one hundred fifty words in one minute on "Now is the time for all good men to come to the aid of the party," and, what is still more marvelous, they did not have more than three or four errors in each line! But they were regarded as freaks — people who had special ability or genius, who
had acquired by extraordinary concentration the ability to do the unusual — just like the armless freaks in the sideshow who write with a pen between their toes.
Posted by Robert Messenger at 23:35

Great entry! I wonder who subscribed Collier's Magazine on your behalf 104 years ago? Interesting things revealed in these adds, esp. the reference to the court case imposing the name change for ***-SHO. And I would rather obey the Lady in the last picture - she seems to have the first and the last say.
Coincidentally, there is a Fay-Sho for sale on German ebay right now.