Talking About ... What Else? Typewriters! 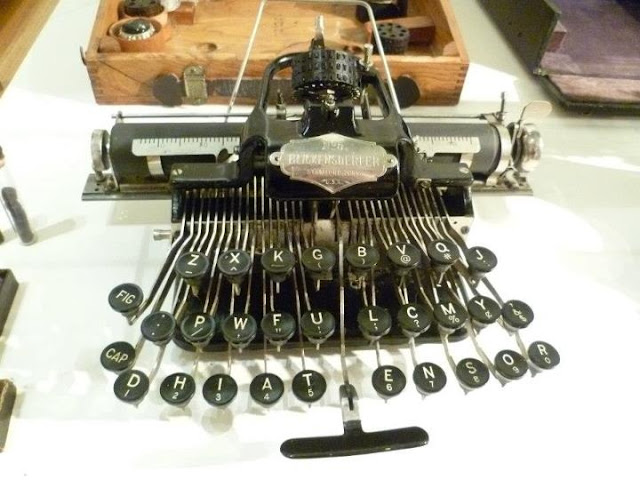 All typewriter images by Ginger Gorman

ABC Radio’s Emporium program yesterday ran an interview with me regarding the Typewriter Exhibition at the Canberra Museum and Gallery (the exhibition still has a month to run, so take it in while you can!).
The segment was put together by ABC Radio presenter Claire (“Ginger”) Gorman (below). 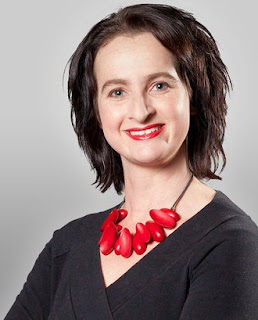 The audio of Ginger’s interview can be heard here.
(But be warned, it goes on for almost 14 minutes! You may also need to turn the volume up on the bottom right underneath the image.) 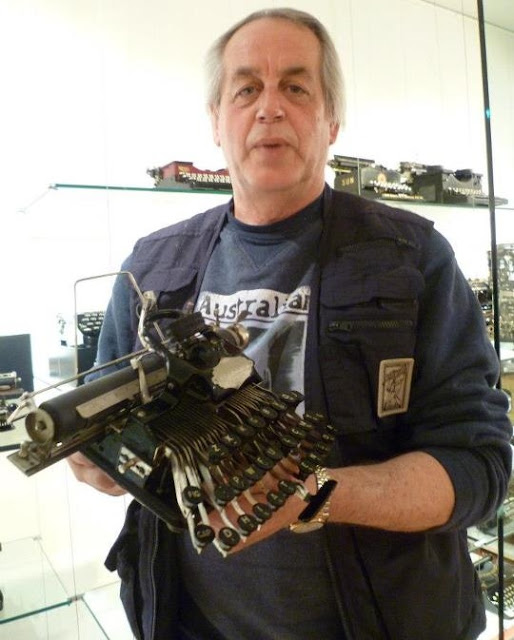 There are also images on ABC Radio’s Facebook page here.
See the webpage on the story here. 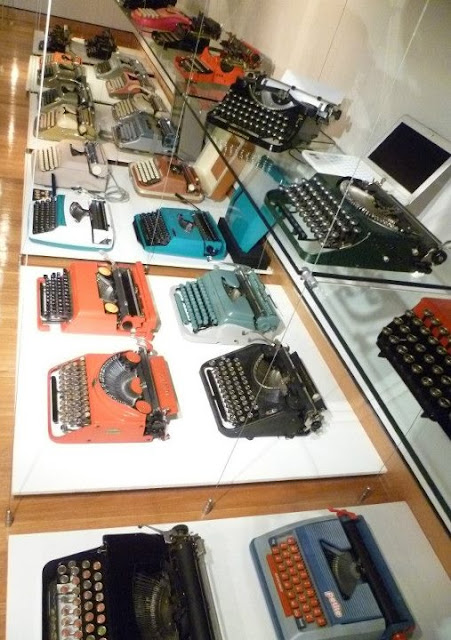 Ginger’s story runs:
“Reminisce with me! What kind of typewriter did you use in your younger days? Did you love or hate it?
“When I was just six-years-old, my Dad bought me a brand new, heavy German typewriter. I loved it so much and wrote endless stories and 'articles' on it. Dad is sure this is why I later became a journalist. Even though I never use it now, I still can’t give it away.
“On the show tomorrow (Sunday) we meet the man who has the largest privately owned collection of typewriters in Australia. Pictured is a 1930s Bantam from this collection.
“With great humour, Robert Messenger shares his treasures and memories with us.
"Share your typewriter memories with me too by posting below or calling into the show on Sunday after 10am on 1300 681 666.
Ginger Gorman 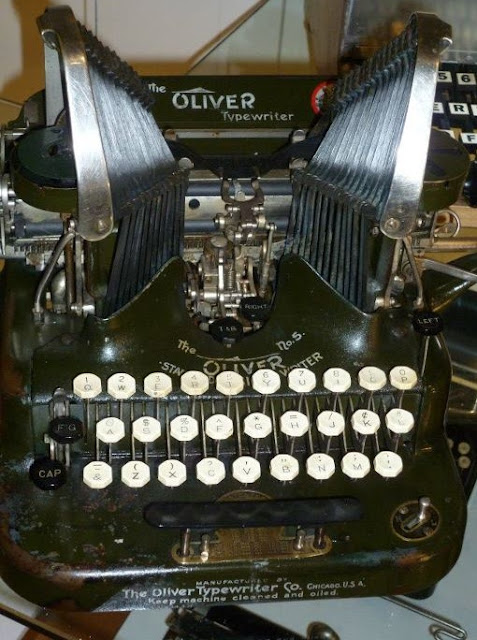 Terrific Typewriters
The [ABC Radio program] Emporium was all about technology this week, and we were looking at a large collection of typewriters and the way they were used.
Think back to your early days of working in an office or studying at a university or technical college.
Did you use a typewriter?
Right now there’s a wonderful exhibition on at the Canberra Museum and Gallery which showcases the typewriter collection of journalist Robert Messenger.
While Robert first used an Underwood Universal typewriter when he was just nine-years-old, it wasn’t until he was 17 that he actually bought one for himself.
Robert has a great fondness for the Olivetti Lettera 32.
One of the strangest in the collection is an American Oliver.
This photo is of Robert with his favourite model - the Blickensderfer 5, made in the late 1800s. 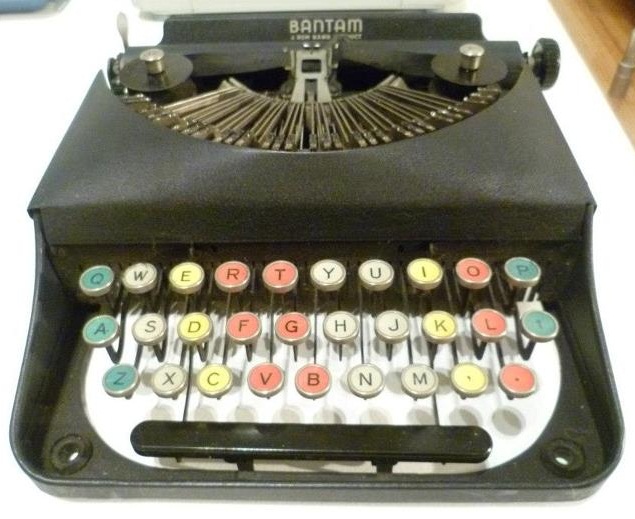 Comments on ABC Radio’s Facebook page about the story are interesting. Here are some of them:
Mark Scarborough: My mum taught me to touch type on her old typewriter. To be honest I am glad she did. There is so many people at work that can't touch type, people are always amazed when they see me type and also carry a conversation with them.
Hayley Jane Symons: Currently sitting on my bookcase is an old Olivetti Lettera 32 typewriter of my Grandfather's which came in a big blue suitcase. I fell in love with it when I was little and could have happily typed away for hours on end. When my Dad recently gave it to me it still had a letter stuck in it to my other Grandfather, which I was obviously midway through typing up. It's one of my favourite things :)
Michelle Preston: I have my grandfather's old typewriter so it would have to have been made in the 1920s it's in a heavy silver case!
Paul Rands: I first used a typewriter when I was visiting friends in Watson, on a trip from Sydney. From memory it was an Olympia. My friend Lee-Ann who is 3 years younger than I am called it her computer (we were 5 and 8 years old!). I can't remember what we typed, but spent most of the day there messing around on it. After that trip, I pestered my folks to get a typewriter for our home. They eventually relented and bought a Brother from Waltons. I think I was about 10 when we got it. I ended up using it all the time for my cassette covers and various other fun things. I don't ever remember using it for a school assignment though LOL
Prue Lloyd McCormack: I used my mum's Olivetti until I was 17 when my father bought me the first of the birthday presents to set me up for life. A Brother correctable typewriter was supposed to get me that first job! I remember typewriting classes at school during the 70s when we would sit at typewriters covered with cardboard boxes so we wouldn't look at the keys. When I joined the ABC in 1980 I had to sit a speed test. Nowadays I just type, it depends on what I'm doing as to the accuracy and speed I attain.
Jane Kim: I gave my old manual typewriter to my kids' high school. They used them to teach the kids to type in the days (only in the '90s) when schools could only afford to have a few computers! It was a mid 70s model but unfortunately I can't remember its make. It had a very modern (for its time) square-looking font. No doubt it ended up in a rubbish tip somewhere :-(
Tony Kennedy: Hi Ginger, I cannot remember the brand but at first I used a typewriter with a red and black ribbon, later it was an electric golfball type. I wrote many letters, especially to our political leaders at the time. Now it is e-mail, but I do long for the day of the written letter to return because of the delay between replies.
Gina Dow: My typewriter is a huge Hermes Ambassador - the colour of Palmolive green soap. I recommend a great "typecasting" blog with heaps of nostalgia and also contemporary typist-artists' work: strikethru.net
Jane Kim: Thanks Gina for the reminder - mine was a Hermes - a cute grey number.
Posted by Robert Messenger at 13:44

What great exposure! I honestly wish I could be there to see your amazing exhibition, but I suppose the book will have to do.
Congratulations, Robert, and I wish you good luck in the coming month of your exhibition.

Wonderful Robert! Thanks for sharing.

It's good to hear you, Robert. From the other end of the World, greetings!