Typewriters and the Absence of Repetitive Strain Injuries 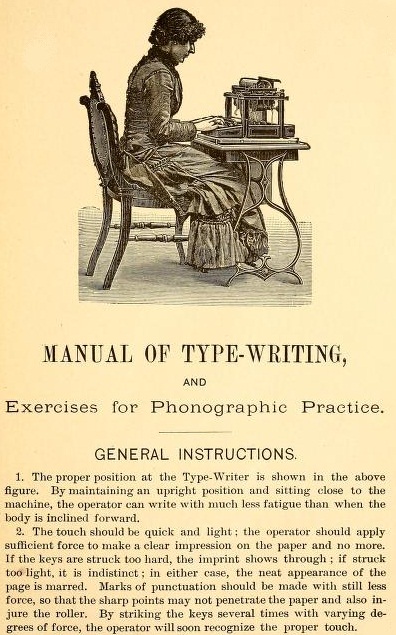 From Humphrey's Manual of Type-Writing,

A Guide to the Art of Type-Writing for Use in Schools,

As I sit here getting RSI from blocking and rebounding junk email from spammers, and a “Typogram” wings its way to Ohio, I’m wondering why RSI, back aches and neck aches were not heard of in the days when we all used typewriters. 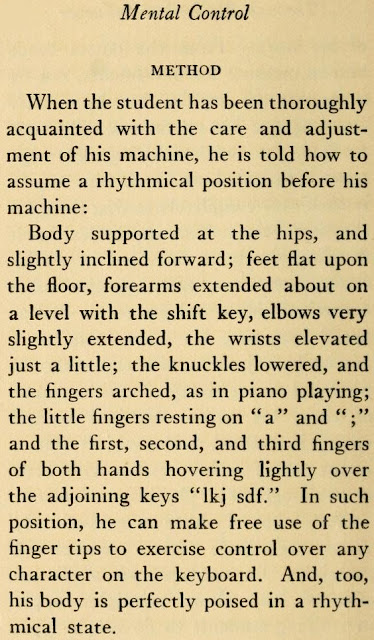 Is it because typing with a typewriter involved more and better exercise of the fingers, hands and arms? Better posturing? Or is it because in the days of typewriting, other forms of exercise were required for most of our inter- and intra-office communication, library research, file retrieval, even meetings? How much money would companies and governments save themselves if we all reverted to using typewriters? 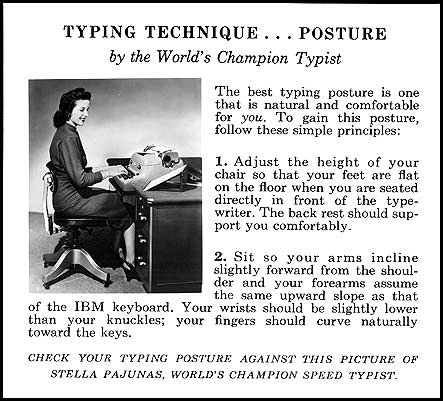 I estimate that in almost 30 years of constant personal or professional use of typewriters, I must have written well in excess of 10 million words – and not once suffered from RSI. 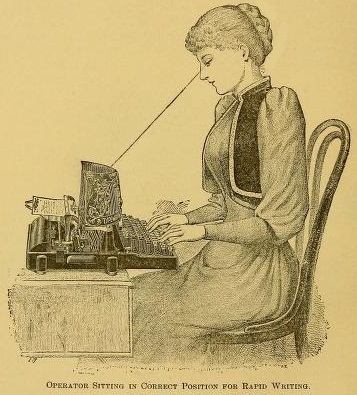 An article in today’s The Canberra Times by Melissa Davey says workers who compensate for spending hours in front of a computer by using ergonomic chairs, standing desks and good posture are still likely to suffer back, neck, wrist and shoulder injuries. 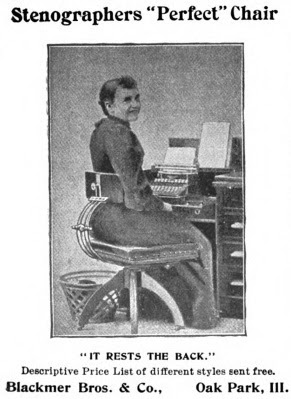 The story goes on to quote doctors as saying that these workers also increase the risk of heart disease, obesity and diabetes.
“Increasing computer use almost negated the benefits of improved workstation design and posture, new research from the University of Sydney has found, suggesting the overall workplace environment is to blame.”

Davey quotes Karin Griffiths from the university’s faculty of health science, the lead author of the study, as saying, “Workstation design has come a long way since the ’80s and they are good changes. But what I also found was the proportion of people reporting symptoms has not changed much despite this  [and] is not enough to keep up with health issues that arise from paperless, IT-dominated offices.’’ 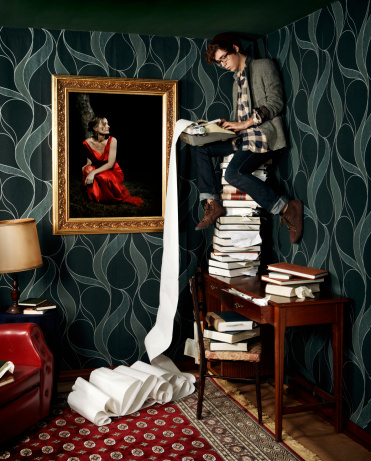 Tip 1. Sometimes change position when typing
The survey of nearly 1000 workers across six government departments found about 85 per cent of people who spent more than eight hours a day working at a computer experienced neck pain. Published in WORK: A Journal of Prevention, Assessment and Rehabilitation, the study also found threequarters reported shoulder pain and 70 per cent reported lower back pain. 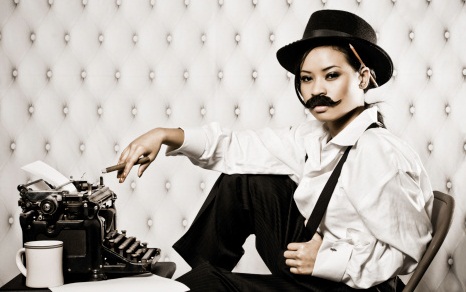 Tip 2: Take breaks, wear a false moustache
and lean back in a padded cell
Dr Griffiths, a physiotherapist, told Davey, “I know the amount of money organisations are putting into improved workstations and ergonomics, and it’s not that those changes aren’t important. The problem is nearly everything can be done at the desk now – communication, library research, file retrieval, even meetings. It doesn’t matter how good the chair is, it is not going to address the health problem of what some researchers are calling ‘chair disease'." 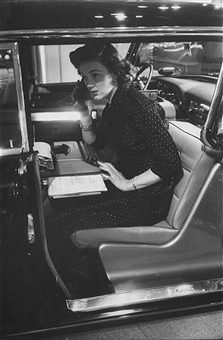 Tip 3: Try not to lean forward too far while typing in a car
Long hours of computer work may also contribute to cardiovascular disease, diabetes and obesity, she said, with people in senior or managerial positions the hardest hit because they worked at a computer most. 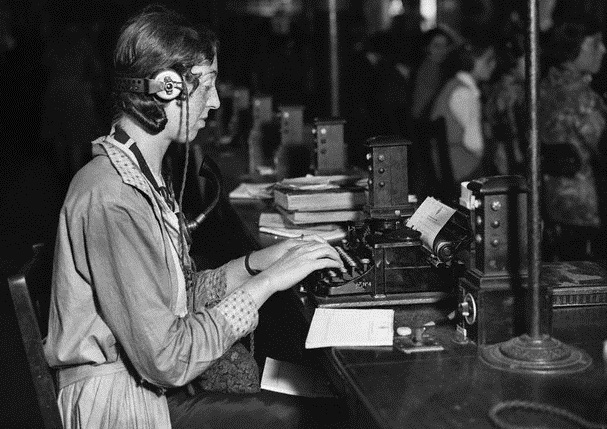 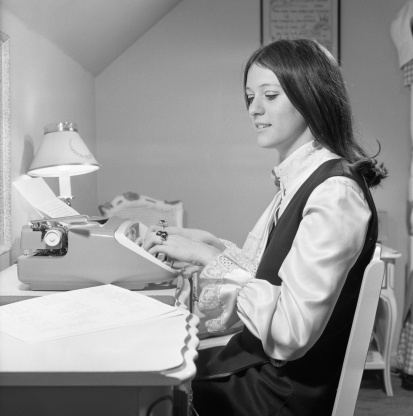 Tip 4: Instead, keep the back iron rod straight. Pull the bum into the base of the chair
Nicholas Gilson, a lecturer in physical activity and health at the University of Queensland, has studied employees in an open-plan office who were given a choice of sitting or standing desks. After one week, their overall sedentary time had not decreased. 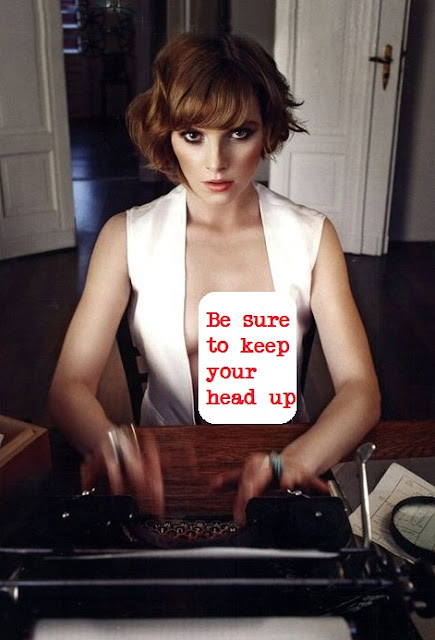 Tip 5: As it says on this modest lady's chest, try to keep your head straight as much as possible
‘‘My main observation is that we typically deal with the important issues that research like this raises in a reactive way … like sit-stand desks,” Dr Gilson said. “But workers need environmental opportunities to frequently change posture from sitting to standing and moving in work tasks.” 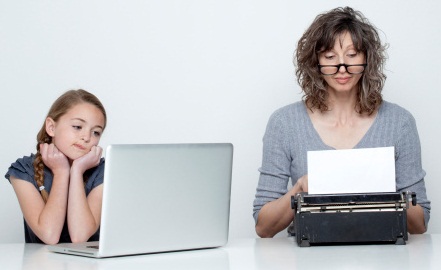 Tip 6: Take note of proper typing posture from your elders
Discouraging internal emails on the same floor, holding meetings while standing or walking, and placing phones on a standing bench were some of the strategies suggested by researchers. “This is not only going to benefit musculoskeletal issues, but also risk factors associated with chronic disease and in all likelihood, productivity and job satisfaction,” Dr Gilson said. 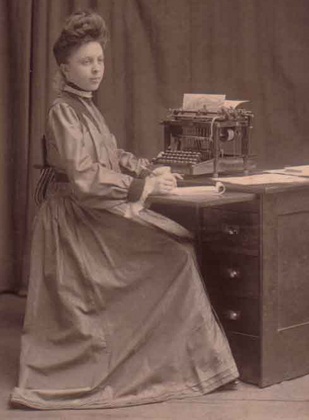 Tip 7: Occasionally push the typewriter back, make notes by hand, and swivel the neck 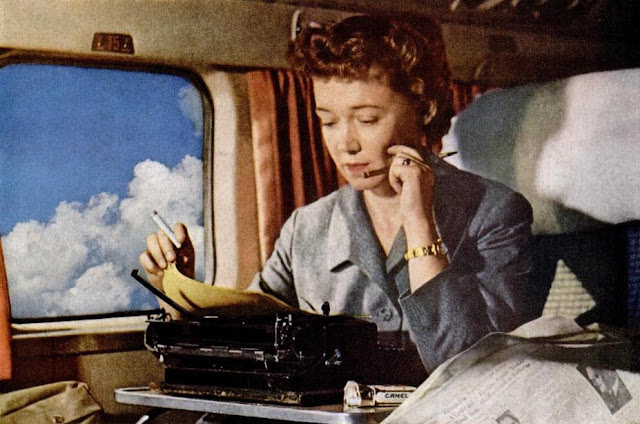 Tip 8: A good finger poke in the cheek will also ensure the blood is circulating properly

Tip 9: If you're too tired to walk around the office, just grab a passing elephant, plonk your typewriter on its head and take a ride 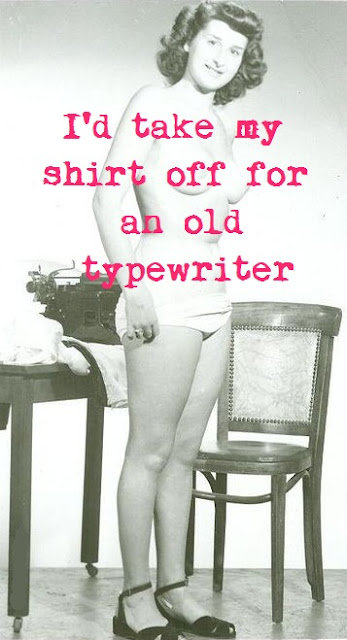 Tip 10: And finally, once in a while, stand up from the typewriter, take your gear off and wriggle your shoulders.
Posted by Robert Messenger at 13:21

fHilarious! I ran across those finger tip things when I was reading up on "speed keys" because the patents reference each other.
I also love the backward-facing car desk.

Thank you Peter. Have you also come across the padded keytops patent?

Something you've been thinking about while lugging those typewriters of late?

Where's the part about radiation exposure due to your FuNKoMaTic?

Robert, I did two posts on them. I'm still not finding any ads or other ephemera around them.

I always sit right and proper while using my typewriter, but find myself slouching amazingly when I use a computer (like this very minute). My knees pulled up near chin height, sitting just about on my lower back, arms outstretched with the right one inbetween my knees. I must say, though, it is comfortable. Of course, I reposition myself and do not spend all that much time in front of this glowing screen.
Thanks for the post, Robert.

I think you hit the nail on the head with reasons why there was no RSI with typewriters. All one needs to do is look at the way even data entry people work, generally poor posture, poor rhythm, and the use of writing desk heights for the keyboards. Those are just a few. I personally think the design of the keyboards have a lot to do with injury.

Our typing teacher (although we thought her grouchy and stubborn) drilled into us correct posture, positioning of a typewriter (and what we were copying) as well as good rhythm.

There was RSI in the typewriter world, assuming we ignore the fact that the term “RSI” itself was only invented in the 1980s in Australia. To quote from a modern book “Office Ergonomics: Ease and Efficiency at Work”…

In 1926, Klockenberg reported heartbreaking stories of typists: lured by available jobs in “secure” offices, many young women trained to become typists. After just a few years working on then purely mechanical typewriters, some began to suffer from numb, painful hands, with injuries debilitating enough that they could not lift their small children.

I’m not sure anyone will see this post, but I’ve developed what seems to be De Quervain's tenosynovitis. I believe that it’s due to using my typewriters on desks that are too high (or chairs that are too low). Marcin above quotes a book that mentions lifting children. This medical source does, too. Repetitive tasks (typing), lifting babies, and so on: https://www.mayoclinic.org/diseases-conditions/de-quervains-tenosynovitis/symptoms-causes/syc-20371332

Wow. Thanks for the response, Robert. I receive 50 hits on a good day.