In his 2017 paper “The Life, Death and Rebirth of Typewriters”, Richard Polt says the 1714 patent of English engineer Henry Mill reads as if it is describing a typewriter, but “We do not know what Mill’s invention looked like or what, exactly, it did.” From that same early 18th Century period, although presumably on a somewhat larger scale, is a contraption that is now also being labelled a “typewriter”. This is the “Lagado machine” for writing books in politics, poetry, philosophy, law, mathematics and theology. It is outlined by Anglo-Irish satirist Jonathan Swift (1667-1745) in Gulliver’s Travels (1726). And thanks to the marvellous inventive ingenuity of French caricaturist Jean-Jacques Grandville (real name Jean Ignace Isidore Gérard, 1803-47) for the 1838 French translation of Gulliver’sTravels, we know what it looked like. Or, to be more precise, what Grandville was able to construe from Swift’s creative and detailed writings. 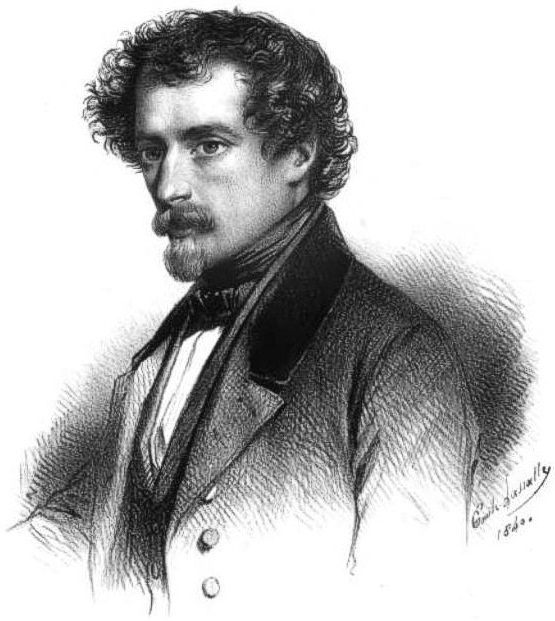 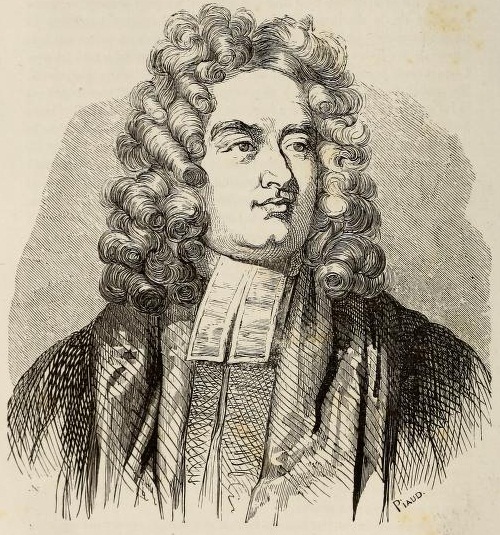 Dean Swift
With regard to the “Lagago typewriter”, Swift is believed to have been heavily satirising the Royal Society as well as caricaturing the far-sighted work of Leibniz and Llull. Gottfried Wilhelm von Leibniz (1646-1716), a German polymath and philosopher, was one of the most prolific inventors in the field of mechanical calculators. While working on adding automatic multiplication and division to Pascal's calculator, he was the first to describe a pinwheel calculator, in 1685, and invented the Leibniz wheel, used in the arithmometer, the first mass-produced mechanical calculator. He also refined the binary number system, which is the foundation of virtually all digital computers. Leibniz was influenced by Ramon Llull (1232-c1315), a philosopher, logician, Franciscan tertiary and Majorcan writer considered a pioneer of computation theory. 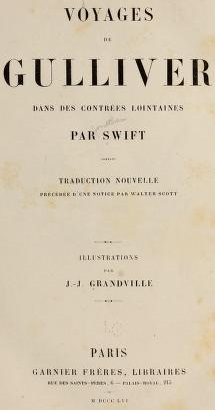 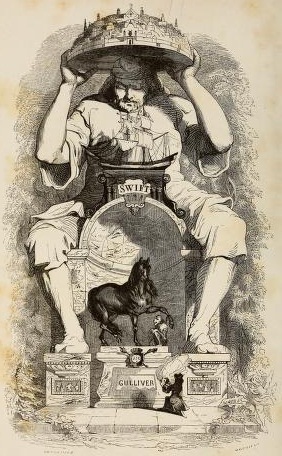 Gulliver's Travels comprises four books – each recounting voyages by Lemuel Gulliver to fictional exotic lands. Part III is titled “A Voyage to Laputa, Balnibarbi, Luggnagg, Glubbdubdrib and Japan” from 1706-10. In chapter five, Gulliver describes a visit to “the Grand Academy of Lagado in Balnibarbi” and records seeing great resources and manpower employed on researching completely preposterous schemes. Among these is a “permutational [the process of altering the order of a given set of objects in a group] machine” for improving “speculative knowledge”. The device consists of a frame holding blocks. Swift wrote: 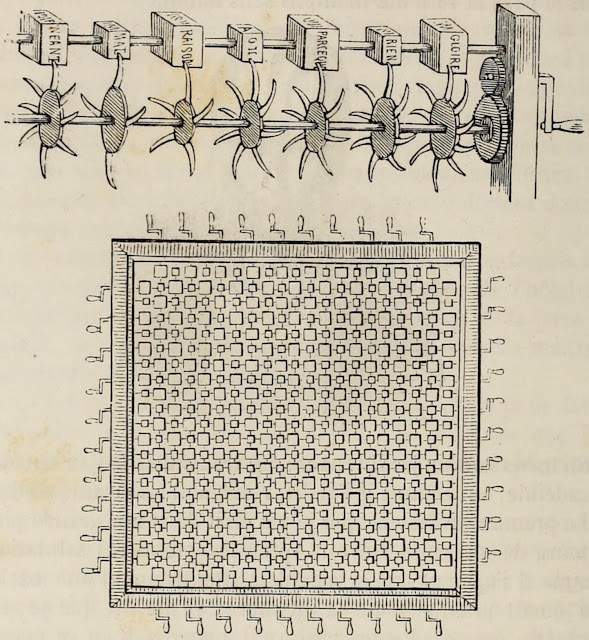 14    WE crossed a Walk to the other part of the Academy, where, as I have already said, the Projector in speculative Learning resided.
15    THE first Professor I saw was in a very large Room, with forty Pupils about him. After Salutation, observing me to look earnestly upon a Frame, which took up the greatest part of both the Length and Breadth of the Room, he said perhaps I might wonder to see him employed in a Project for improving speculative Knowledge by practical and mechanical Operations. But the World would soon be sensible of its Usefulness, and he flattered himself that a more noble exalted Thought never sprung in any other Man's Head. Every one knew how laborious the usual Method is of attaining to Arts and Sciences; whereas by his Contrivance, the most ignorant Person at a reasonable Charge, and with a little bodily Labour, may write both in Philosophy, Poetry, Politicks, Law, Mathematicks and Theology, without the least Assistance from Genius or Study. He then led me to the Frame, about the sides whereof all his Pupils stood in Ranks. It was twenty Foot Square, placed in the middle of the Room. The Superficies was composed of several bits of Wood, about the bigness of a Dye, but some larger than others. They were all linked together by slender Wires. These bits of Wood were covered on every Square with Paper pasted on them, and on these Papers were written all the Words of their Language in their several Moods, Tenses, and Declensions, but without any Order. The Professor then desired me to observe, for he was going to set his Engine at Work. The Pupils at his Command took each of them hold of an Iron Handle, whereof there were fourty fixed round the Edges of the Frame, and giving them a sudden turn, the whole Disposition of the Words was entirely changed. He then commanded six and thirty of the Lads to read the several Lines softly as they appeared upon the Frame; and where they found three or four Words together that might make part of a Sentence, they dictated to the four remaining Boys who were Scribes. This Work was repeated three or four times, and at every turn the Engine was so contrived, that the Words shifted into new places, or the square bits of Wood moved upside down.
16    SIX Hours a-day the young Students were employed in this Labour, and the Professor shewed me several Volumes in large Folio already collected, of broken Sentences, which he intended to piece together, and out of those rich Materials to give the World a compleat Body of all Arts and Sciences; which however might be still improved, and much expedited, if the Publick would raise a Fund for making and employing five hundred such Frames in Lagado, and oblige the Managers to contribute in common their several Collections.
17    HE assured me, that this Invention had employed all his Thoughts from his Youth, that he had employed the whole Vocabulary into his Frame, and made the strictest Computation of the general Proportion there is in the Book between the Numbers of Particles, Nouns, and Verbs, and other Parts of Speech.
18    I made my humblest Acknowledgement to this illustrious Person for his great Communicativeness, and promised if ever I had the good Fortune to return to my Native Country, that I would do him Justice, as the sole Inventer of this wonderful Machine; the Form and Contrivance of which I desired leave to delineate upon Paper as in the Figure here annexed. I told him, although it were the Custom of our Learned in Europe to steal Inventions from each other, who had thereby at least this advantage, that it became a Controversy which was the right Owner, yet I would take such Caution, that he should have the Honour entire without a Rival.
Posted by Robert Messenger at 13:03

Interesting. Interesting indeed. Who would say it? Literature, sometimes, is not what it seems. :P

I love it! I must reread Gulliver's Travels sometime, and I'd like to have the edition with these illustrations. I think Swift's device is also discussed in Matthew Kirschenbaum's Track Changes: A Literary History of Word Processing.