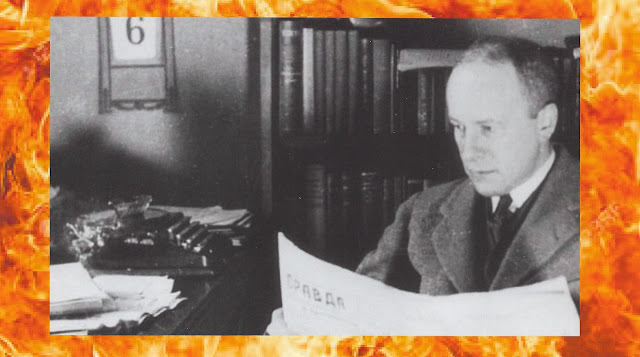 In this age of rampant fake news, there are doubtless hundreds of Russian trolls and ex-Cambridge Analytica employees lining up for their Walter Duranty Awards. Walter who? Walter Duranty is probably the most universally despised journalist in the history of newspapers, and the most justifiably disrespected person ever to use a typewriter. Over the past 24 years, a number of dubious prizes have been awarded in Duranty's thoroughly and deservedly blackened name, including for "Journalistic Mendacity", "Journalistic Dissimulation", "Obfuscating Propaganda Journalism" and "Historical Distortions". The prizes were started by the Ukrainian American Justice Committee in 1994 to cover journalistic "deceit, prevarication, duplicity, fraud, racism or, of course, dissimulation", and have been continued in various guises ever since. Nowadays the award highlights "egregious examples of dishonest reporting". 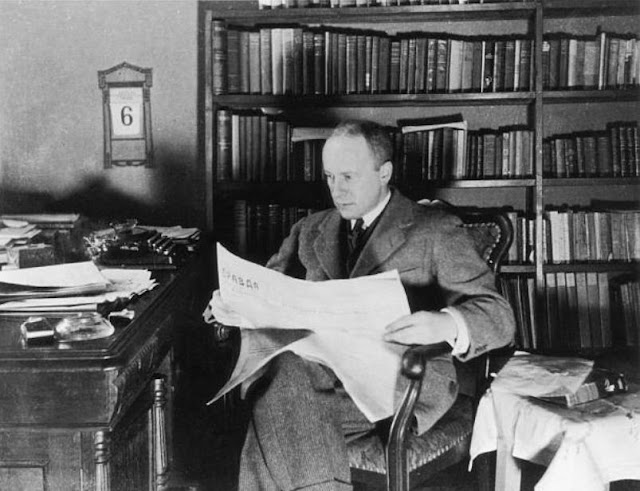 Duranty's crime? After gaining an exclusive interview with the despot in 1922, Duranty became a lackey for Joseph Stalin (who he called "the greatest living statesman" and the "guardian of a sacred flame"), and told the world there was no famine-genocide in the Ukraine in 1932-33, when in truth Stalin had deliberately caused the deaths of up to 10 million people, mostly from starvation. Duranty, instead, put this cold-blooded mass slaughter down to "you can’t make an omelet without breaking eggs". The Ukraine outrage has been referred to as the "Other Holocaust" and the "Holodomor". For his efforts in covering up the atrocity, Duranty was awarded a Pulitzer Prize for what The Nation claimed were the most "enlightening, dispassionate, and readable dispatches from a great nation in the making which [have] appeared in any newspaper in the world." What Duranty wrote was actually a pack of downright lies. 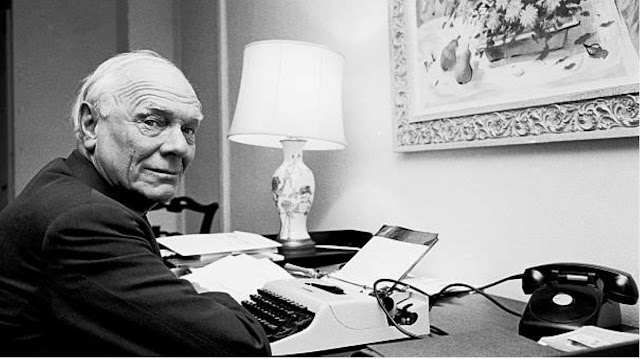 Malcolm Muggeridge (above), back then the Manchester Guardian's Moscow correspondent, had seen first-hand the reality in the Ukraine, and labelled Duranty a "persistent liar" and "the greatest liar of any journalist I have ever met". Washington columnist Joseph Alsop (below) said "Lying was Duranty's stock in trade" and added that Duranty was a "fashionable prostitute". 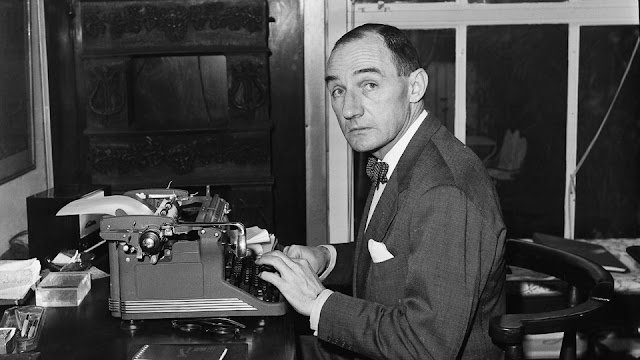 Remarkably, the Pulitzer board has twice resisted calls to revoke Duranty's award. The first occasion was in 1990, and came in the face of such works as Sally J. Taylor's Stalin's Apologist, Walter Duranty: The New York Times' Man in Moscow, published earlier that same year. In 2003 the board found “no clear and convincing evidence of deliberate deception, the relevant standard in this case". 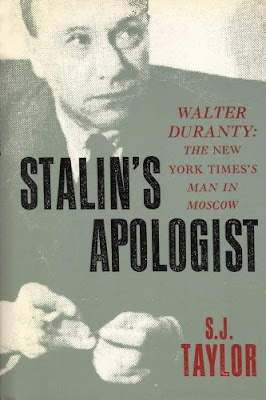 Duranty worked in Moscow for The New York Times from 1921. It took almost 70 years for the Times to think again about the work he produced for the newspaper. After reviewing Taylor's book, the Times assigned Karl E. Meyer of its editorial board to write a signed leader about Duranty's journalism. Meyer said Duranty's articles constituted "some of the worst reporting to appear in this newspaper". He concluded that Duranty had bet his reputation on Stalin and "strove to preserve it by ignoring or excusing Stalin's crimes". 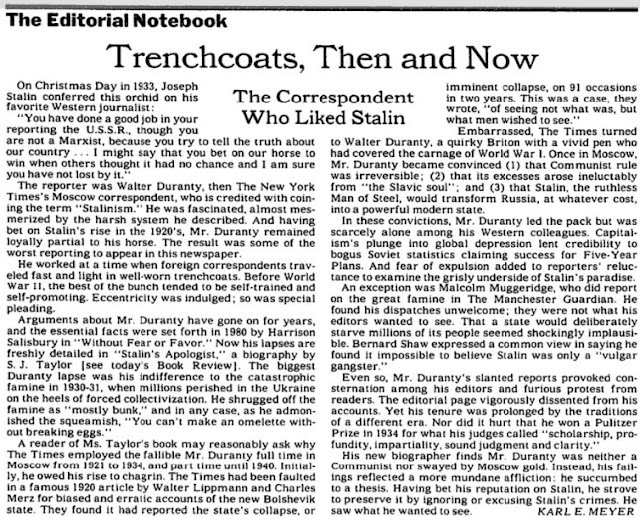 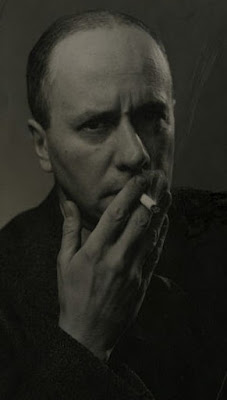 Duranty in Vanity Fair, 1934
Thirteen years later, the Times hired Mark von Hagen, professor of Russian history at Columbia University, to re-investigate the matter. Von Hagen described Duranty's coverage as a ''dull and largely uncritical recitation of Soviet sources''. ''That lack of balance and uncritical acceptance of the Soviet self-justification for its cruel and wasteful regime was a disservice to the American readers of The New York Times and the liberal values they subscribe to and to the historical experience of the peoples of the Russian and Soviet empires and their struggle for a better life.'' Of Duranty's Pulitzer Prize, Von Hagen felt ''They should take it away for the greater honor and glory of The New York Times. He really was kind of a disgrace in the history of The New York Times." Times publisher Arthur Ochs Sulzberger Jr called Duranty's work "slovenly" and that that "should have been recognised for what it was by his editors and by his Pulitzer judges seven decades ago.'' Times executive editor Bill Keller added, ''It's absolutely true that the work Duranty did, at least as much of it as I've read, was credulous, uncritical parroting of propaganda. As someone who spent time in the Soviet Union while it still existed, the notion of airbrushing history kind of gives me the creeps.'' Three years ago Times writer David W. Dunlap called Duranty's Pulitzer "our 'Guilty With an Explanation' prize, the only framed tribute in the 15th-floor [Times] Pulitzer gallery that contains a description of what went wrong with the correspondent’s reporting." 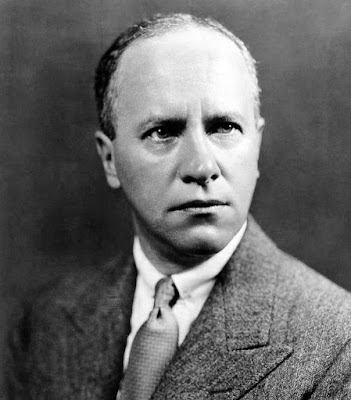 The Times admits today that even though its editors knew at the time Duranty's reporting was "tendentious", it kept him on board until 1941. The Times has online a "Statement About 1932 Pulitzer Prize Awarded to Walter Duranty" and concedes that "Since the 1980s, the paper has been publicly acknowledging his failures." "Times correspondents and others have since largely discredited his coverage. Duranty’s cabled dispatches had to pass Soviet censorship, and Stalin’s propaganda machine was powerful and omnipresent. Duranty’s analyses relied on official sources as his primary source of information, accounting for the most significant flaw in his coverage - his consistent underestimation of Stalin’s brutality ... Taking Soviet propaganda at face value this way was completely misleading, as talking with ordinary Russians might have revealed even at the time. Duranty’s prize-winning articles quoted not a single one - only Stalin ..." 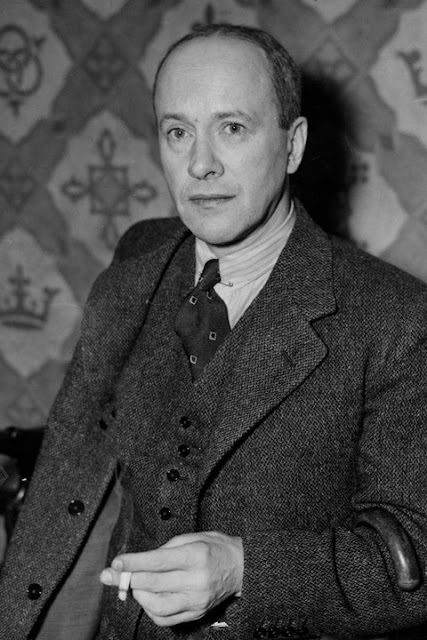 In 2003 The Guardian published an article, "Ukrainians want pro-Stalin writer stripped of Pulitzer", by Askold Krushelnycky, in which Duranty was described as a "drug addict, sexual predator on both sexes and apologist for Stalin".  It said that in the 1920s, Duranty lived in Paris, where he met Aleister Crowley and took part in magic rituals and drunken orgies and developed an opium habit. Historian Robert Conquest told The Observer that Duranty was blackmailed by Soviet secret police over his sexual proclivities.
Duranty was born in Liverpool, England, on May 25, 1884, and was educated at Harrow and Emmanuel College, Cambridge. He died in Orlando, Florida, on October 3, 1957, aged 73. 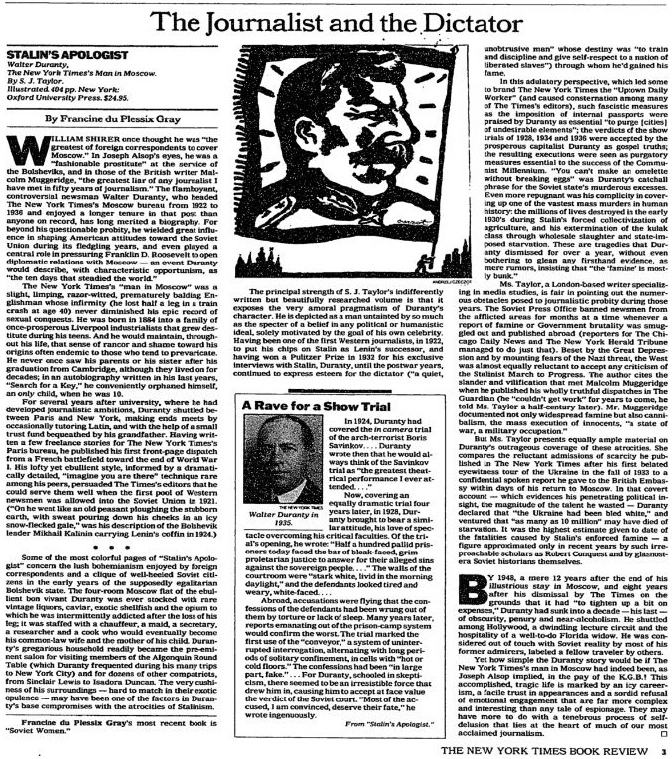 Posted by Robert Messenger at 22:12

Thank you Robert for this piece. It causes me to pause and wonder who are the Durantys of our age.

Good question when you see that most MSM now is just viewing the world under their ideological viewpoint and not trying to report the actual situations to the best of their abilities.

A man ahead of his time when one considers much of the electronic news media biased reporting and sensationalizing rather than real reporting. Too bad the Nobel people are too proud of them selves to revoke his reward.