One Last Sheet Left in the Typewriter: The Tragic End for Young Broadway Playwright Leon Cunningham

On the evening of Monday, December 8, 1930 - exactly five weeks after his 35th birthday - successful young Broadway playwright and actor Leon Michael Cunningham typed the words "The End" on the last page of his latest play. His typewriter sat on a desk in a tiny, otherwise sparsely furnished $6-a-week third-floor room in a boarding house at 62 West 69th Street, Manhattan, his "home" for 10 years. Leon left the sheet in the platen of his typewriter and walked up two floors to a bathroom, carrying a long electric light cord. In the bathroom he fashioned one end of the cord into a noose and tied the other end to an overhead water pipe. He stood on a chair, put the noose around his neck and kicked the chair away from under his feet.
Some hours later, at 9 o'clock that night, Leon's Jamaican friend George H. Byron, a theatre porter who was living in the same building, found Leon's body and alerted police. Patrolman John Owens, of the West 47th Street station, attended, and found all but one page of the typescript of Leon's play on the desk, beside his typewriter. Told by police of Leon's demise, an aunt, Mrs V.J. DeCamp of East Lansing, said "That part of the manuscript of the play was found in the typewriter in his room adds to the strangeness of the case." Patrolman Owens said he believed Leon had committed suicide once he had completed the play, and The New York Times agreed, writing that Leon had finished the script. Most other newspaper reports of Leon's death, however, led with the angle that because the last page was still in the typewriter, the play was unfinished, as if to imply an unfulfilled life. 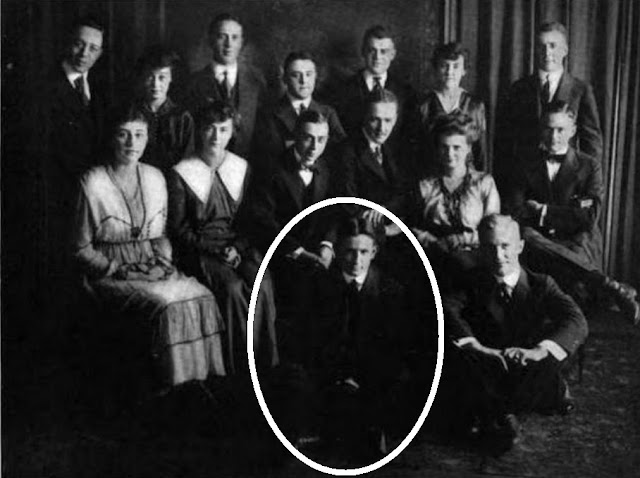 Leon M. Cunningham with fellow actors in the Michigan University Comedy Club in 1915.
Yet Leon Cunningham had achieved much in his short if often unhappy life, and family, close friends and former fellow students from Michigan University were at a loss to explain why he'd taken his own life. The police theory, based on what some of Leon's friends told them, was that Leon had been brooding while waiting to be paid for the staging of one of his plays in Germany. There were other ideas. Michigan University's view was that Leon had "waged a desperate battle with poverty and discouragement". It said he had been "forced to do something for a living while writing plays. He tried journalism [for the Detroit News], salesmanship and finally acting." But each time he was drawn back to his typewriter and his plays. In his home town of Leslie, Michigan, Leon was known as someone who was "temperamental" and little understood by casual acquaintances, but warmly regarded by real friends. There was a question about lingering concerns over a motor car accident three months earlier, on September 11, involving a Miss Helen Zolowski.
There had also been some quite cruel reviews of Leon's plays. The Wonder Ship (about Zub, a young man with "a tragic inability to grasp prosaic reality" and who "never grows up to put his dreams to constructive action") was said in Delaware in May to have been a tragedy with a "tragic atmosphere". An April 1929 Wisconsin review would have stung, too: "Some of you may recall Leon Cunningham ... some actors may even recall his play [Poor Fish]." Generally, however, reviews of Leon's acting performances were warm to say the least .. if only he'd abandoned the typewriter!
Two of Leon's plays reached Broadway, the hayseed comedy Neighbours and Hospitality. Other plays included Small Town Stuff. His Broadway acting credits included White Eagle,1927, The Vagabond King, 1925, Only 38, 1921, Hamlet, The Taming of the Shrew, Twelfth Night, The Bonds of Interest and A Night in Avignon, all in 1919. It didn't help Leon's cause that at the height of his play-writing powers, in 1922-23, Broadway had a rare run of five consecutive smash hits (it was called America's "Golden Age" of theatre), and with his underwhelming Hospitality ... 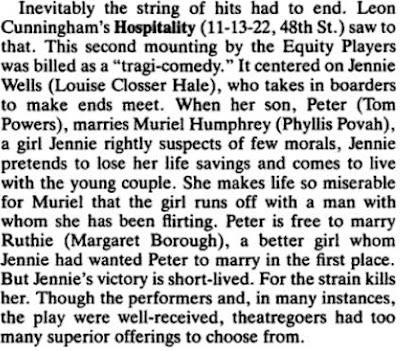 Neighbours at least got some laughs ... 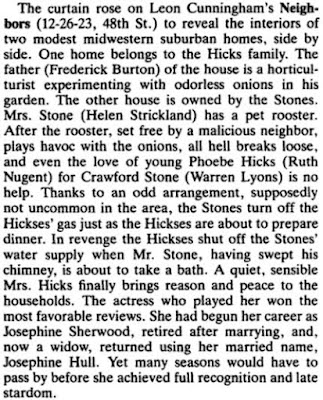 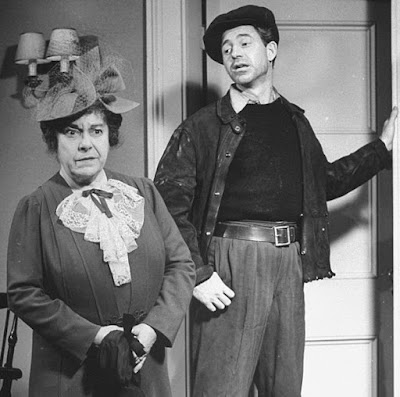 Josephine Hull in the stage play of Harvey.
While police still searched for Leon's relatives, one of Leon's twin sisters, Gertrude Schmidt of Flint, Michigan, travelled to New York to take Leon's body back to Leslie. The simple, small funeral was held on the Friday, December 12, with two friends flying in from Detroit and landing on a field three miles outside the town. One was George Murphy, brother of Detroit mayor Frank Murphy, the other a Michigan University classmate, Lieutenant Ralph Snoke. Leon was buried beside his father, Peter James Cunningham, a Michigan Central Railroad telephone and telegraph operator who died of pleurisy at Battle Creek, aged 37, in 1902, when Leon was just six.
A New York Times profile in December 1923: 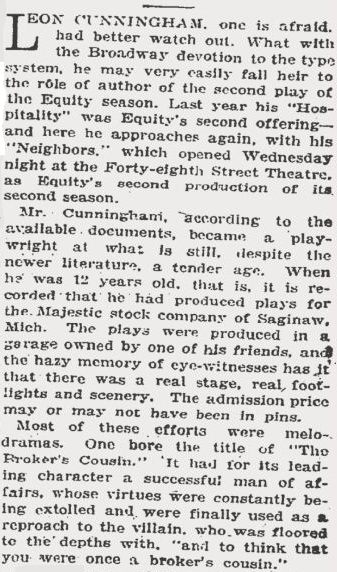 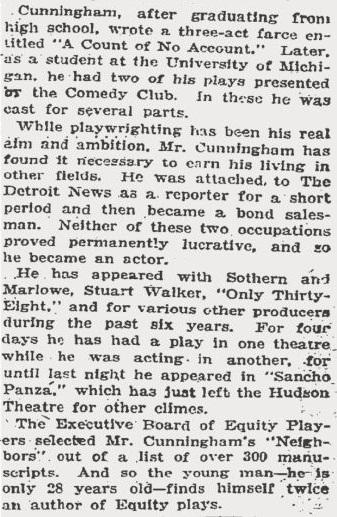 The report of his suicide in the Lansing State Journal: 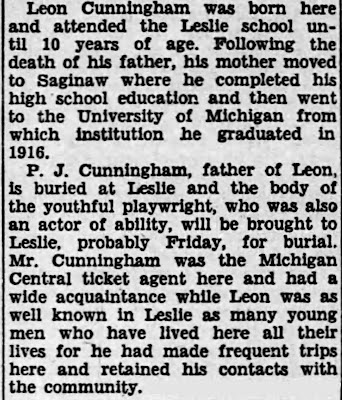 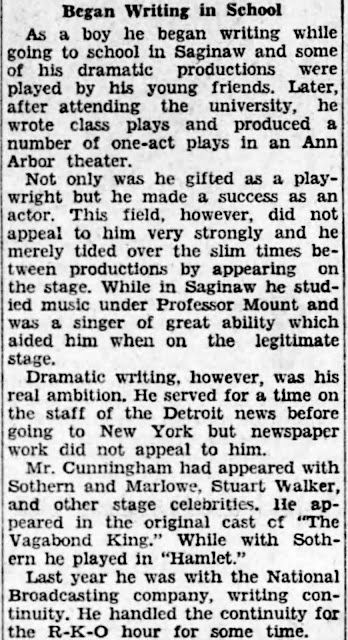 Posted by Robert Messenger at 16:14

Another good one, Robert! Your posts are amazing in their variety. One quibble -- it's the University of Michigan, not Michigan University.