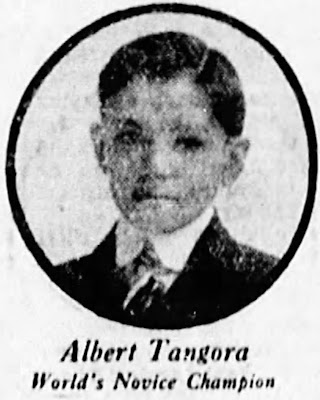 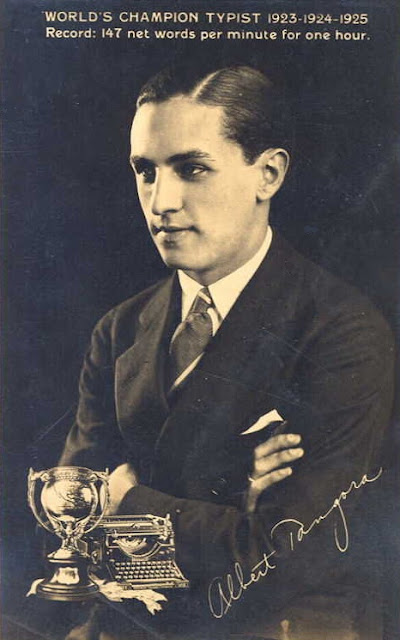 Tangora at 22, 1925
Take your pick - 147 words a minute for an hour under one set of rules, 142 under another. Either way, Albert Tangora most probably remains to this day the world's fastest ever operator of a manual typewriter. Tangora was just 13 years and two months old when, in September 1916, he left Paterson Central High School and started taking typewriting lessons at the (still extant) Spencer's New Jersey Business School, then run by Bushrod Hamilton Spencer (1864-1948) at 160 Market Street, Paterson. 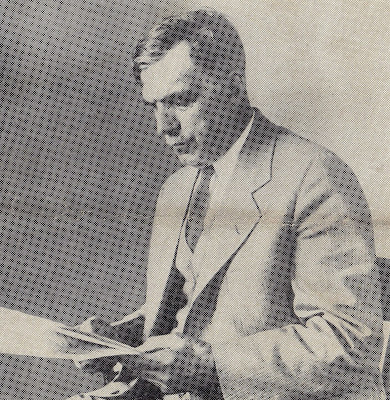 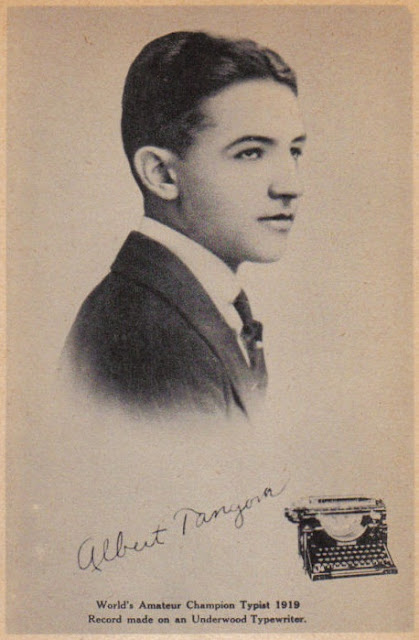 Tangora suffered a lapse in 1918, when he graduated to the amateur division and finished a distant ninth in the world championship, with 117 words a minute. Even putting aside his 34 errors, he was still well behind Rose Bloom, who won with 142 words a minute over 30 minutes. But Tangora made amends the following year, 1919, winning the world amateur championship with an amazing 133 words a minute, which, even taking into account his 26 errors, meant he had typed faster than the winner of that year’s professional title, Bill Oswald (who upset Margaret Owen’s plan of delaying her wedding so she could regain the world title). 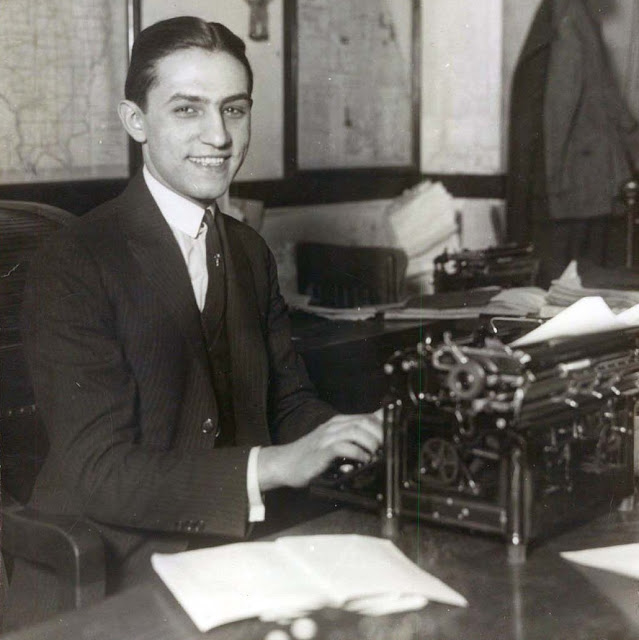 Tangora had to wait until 1923, however, to topple the great George Hossfeld as world professional champion. He won that title with what remained the highest championship one-hour score until the advent of electric IBM machines in 1941 – averaging a staggering 147 words a minute. The scoring system was adjusted in 1924 but Tangora continued to dominate, holding the title for two more years and regaining it in 1928. Naturally, he insured his hands for $100,000 ($1.464 million in today’s money). 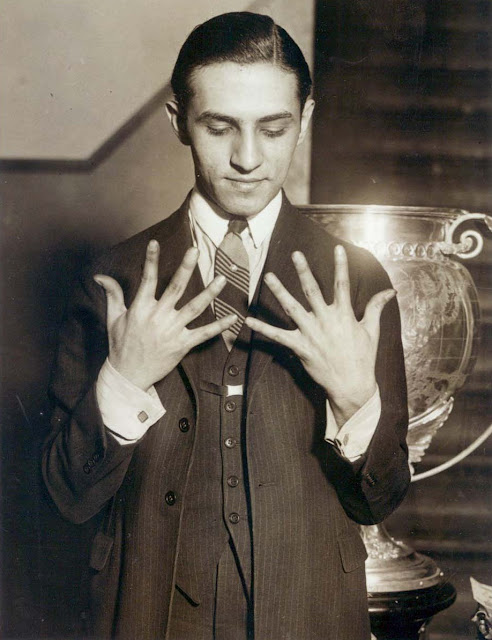 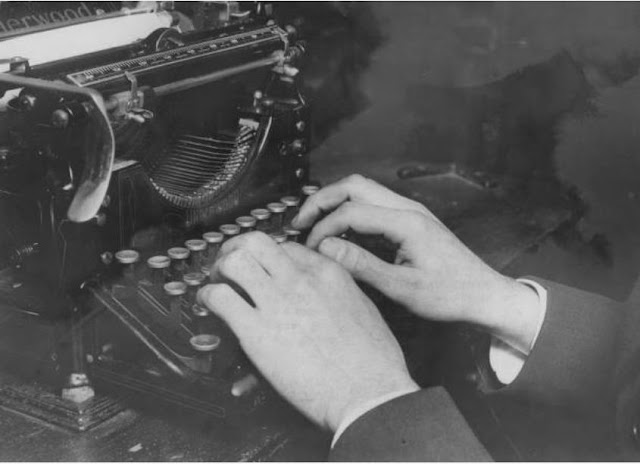 Tangora switched from Underwood to Royal in 1935 and won three more world championships. Tangora produced an effort of 142 words a minute to finish second behind Margaret Hamm’s IBM in 1941, and that effort remains the highest score with a manual typewriter under championship conditions, with the revised scoring system. 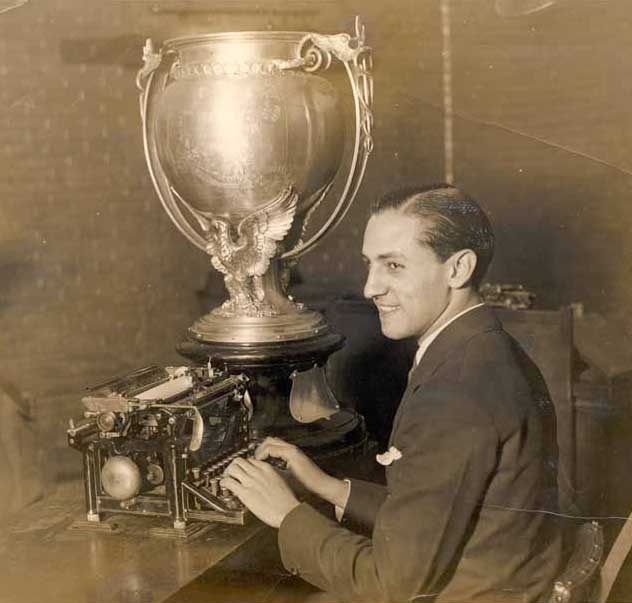 Nonetheless, when Tangora died of a heart attack in Evanston, Illinois, on April 7, 1978, aged 74, newspapers reported that “His record at 147 words per minute for one full hour, established in 1923, is still in the Guinness Book of World Records.” The Chicago Tribune added it was “believed to be still unbroken”. After serving in the US Navy as a lieutenant in World War II, Tangora had been running his own typewriter business in Evanston for some years before he died. 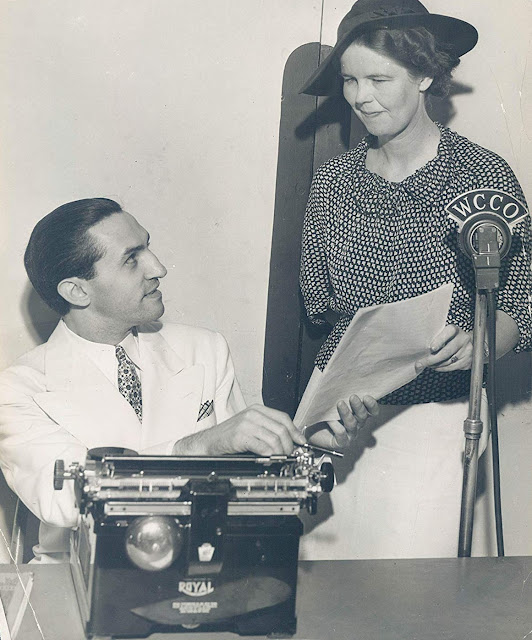 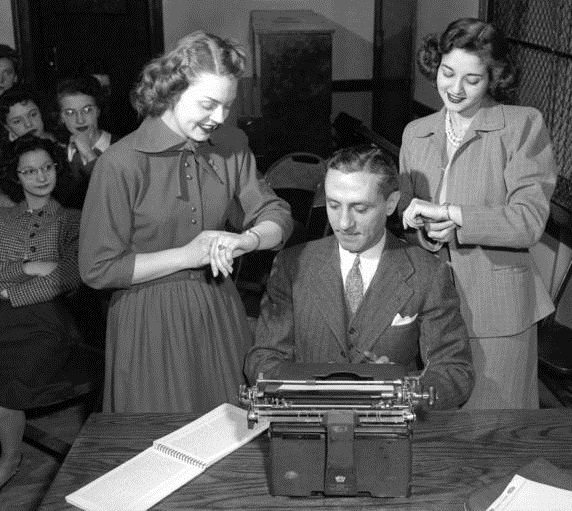 Jean Porter and Sally Biddleman, both 17, time Albert Tangora at 140 words per minute at the world championships at the Jones Commercial High School in Chicago in 1936.
Posted by Robert Messenger at 22:20

Great blog, I am stunned at how fast these people typed on MANUAL machines. I am happy at 30 WPM.

Those typewriter contests and the typists who won them are truly amazing.