What Is It About Typewriters and Boxing? (Part 1) 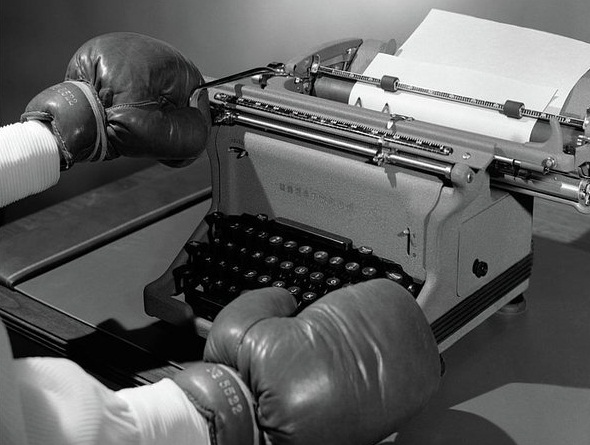 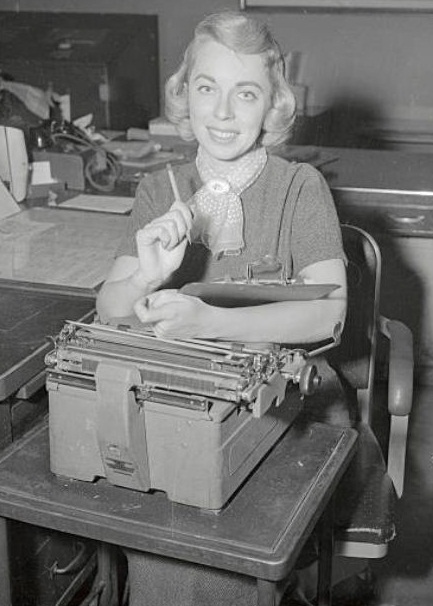 “There’s blood on my typewriter.”
Psychologist Dr Joyce Brothers (1927-2013) in an interview with Rosemary Jones of the Allentown, Pennsylvania, Morning Call, April 11, 1993.

Typing his “Sports Splutterings” column on a Woodstock in Cleveland, Ohio, Walter Lawrence Johns (1911-2002), long-serving sports editor for the Central Press Association, a division of King Features Syndicate, declared her the “new flyweight boxing champion of the TV world”. She’d “kayoed a flock of heavyweight questions” in a long count bout that matched Tunney versus Dempsey at Soldier Field, Chicago in 1927, wrote Johns. Blonde psychologist Joyce Diane Bauer Brothers, a 5ft tall, 101-pound, 28-year-old mother had, in a sustained campaign of 20 months in the mid-1950s, seen off all other contenders and her challengers to win a purse that would equate today to $1.24 million. The challengers included former world light-heavyweight champion Tommy Loughran, a man who’d beaten Jack Sharkey, Max Baer and James J. Braddock, all world heavyweight champions.

Aside from promotional photographs to celebrate her wins, Joyce Brothers never donned a pair of gloves. On December 6, 1955, just turned 28, Joyce Brothers became only the second person, and the only woman ever, to win CBS’s The $64,000 Question by answering seven questions on the TV show. Brothers won another $4000 on June 24, 1956, by beating a challenger to her title. On October 27, 1957, Brothers repeated her 1955 effort by winning the $64,000 Challenge, for a grand total of $132,000. Her subject each time? The history of boxing, ancient and modern. 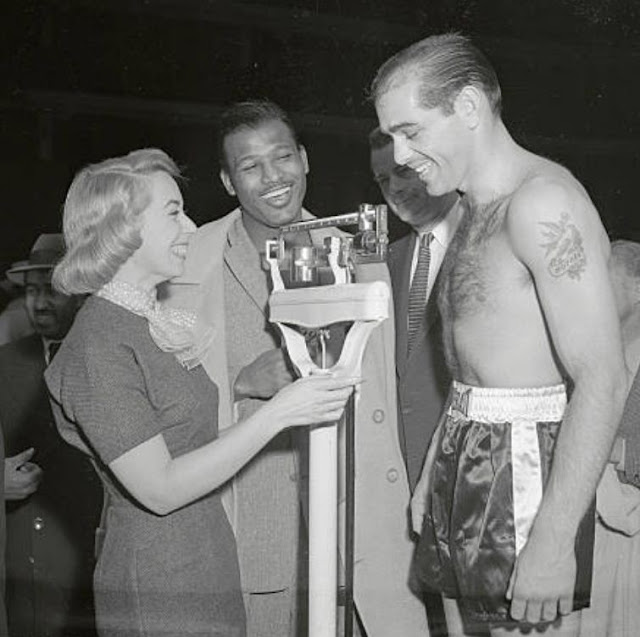 Joyce Brothers and Bobo Olson at the weigh-in
Brothers’ expertise reaped other rewards. Three nights after winning her first quiz jackpot, she covered the world middleweight title fight between Sugar Ray Robinson and Carl “Bobo” Olson at the Chicago Stadium for the United Press wire service (the story she typed at ringside revealed Stanley Ketchel was her favourite fighter, “although he was considerably before my time”). Hers is possibly the only title fight report byline which started with “By Dr …” and the words “I couldn’t have been more wrong” (she had tipped Olson to win). On March 25, 1958, Brothers also became the first woman to commentate on a world title fight on television, when she provided between-rounds “colour” for CBS during the Robinson-Carmen Basilio middleweight bout at the Chicago Stadium. 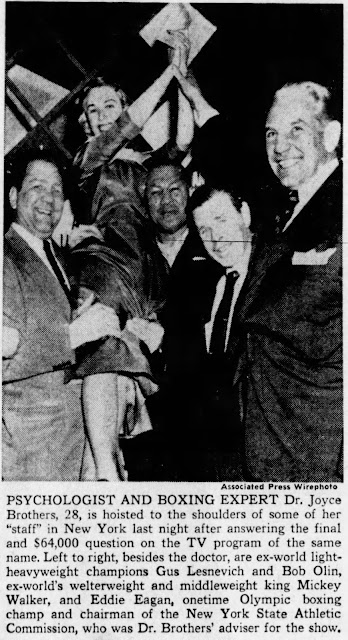 The Newspaper Enterprise Association wire service, in a nod to Damon Runyon, quoted Mushky Magee of the International Boxing Club as saying, “This gal has to be 8 to 5 – that’s in man-to-man betting – to go all the way. Couldja imagine her and all she got stuck in her cropper talking about percentages with Al Weill [former matchmaker at Madison Square Garden]? She might wind up conning him out of the whole building.” Sammy Richman added, “We all wanna know who’s gonna be the dame’s manager.”
“Truly, the typewriter of the heavyweights has been busy these days.”
New York newspaper heralding the coming of Jack Johnson, 1906 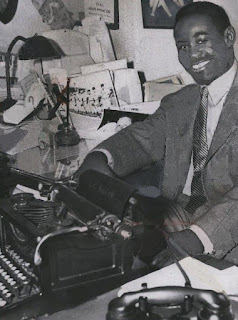 For six solid days there’d been talk of nothing but typewriters (with the odd old map thrown in). Then it came time for me to leave Cincinnati, and Richard Polt drove me to the Union Terminal. As we passed through Over-the-Rhine and across the West End, I noticed we were on Ezzard Charles Drive. I was as surprised to see the Cincinnati Cobra thus honoured (he was Atlantan by birth, a Buckeye by early adoption) as Richard was than I knew of him. But then the conversation quickly got back on track, because there’s a 1951 Press photo out there of Ezzard Charles sitting, behind an L.C. Smith standard typewriter, at a newspaper sports desk. 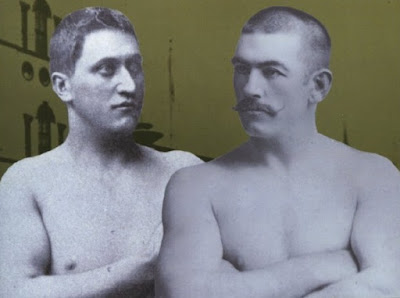 Herbert Slade and John L. Sullivan
Once inside the Union Terminal I soon found a wonderful picture card of the Galveston Giant himself, John Arthur Johnson. But was genial Jack really the first non-white to fight for the world heavyweight championship? Oh, no. That honour belongs to the Māori Herbert Augustus Slade (1851-1913), who faced the Boston Strong Boy John L. Sullivan before 12,000 people at the Madison Square Garden on August 6, 1883, five months after Slade had given exhibitions in Cincinnati with Jem Mace. The Cincinnati Enquirer said of the Sullivan fight, “It is over, and again the laurels of victory encircle the brows of the champion. Sullivan, our pugilistic Alexander, having conquered all who dared face him from New or Old Worlds, adds the antipodean scalp to his belt, and can now rightfully claim to be the champion of the world.”

John L. Sullivan’s quick-fire bare-fisted jabbing on white and coloured faces so impressed Kansas writer Joshua Short that in 1891, a year before Sullivan relinquished the world title to Gentleman Jim Corbett, with gloves and under Marquis of Queensbury rules in New Orleans, Short conjured a machine called the “John L. Sullivan Automatic Typewriter” for a story titled “A Typewriter Romance” in the Salina Vade Mecum. A “beautiful and winsom damsel” called Rosalinda Matilda Fortier was the agent for the Sullivan Automatic in Short’s little homily. A half-tone illustration of the typewriter appeared on the lower left hand corner of the wedding cards when Rosa married W. Wolsey Wycliffe. Sadly, the John L. Sullivan typewriter never existed outside of Short’s fertile imagination. 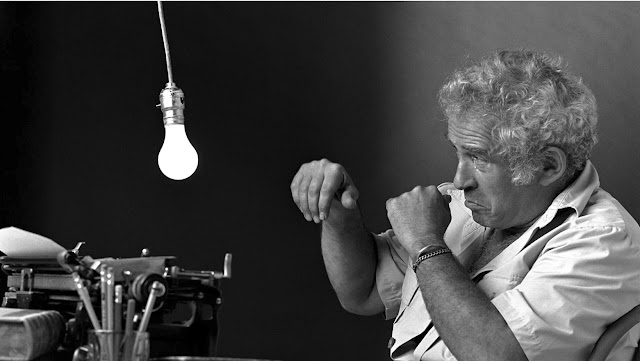 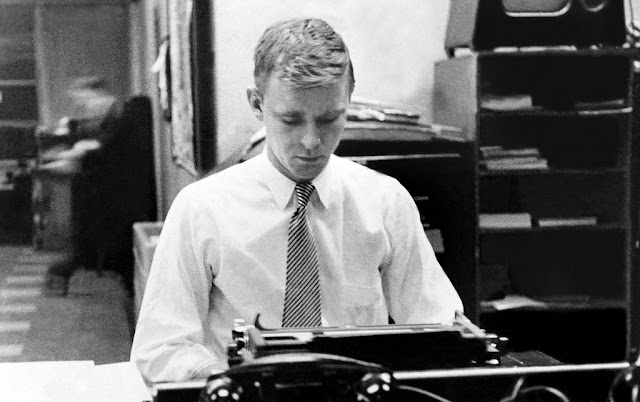 A latter-day Joshua Short was Russell Baker (above), who died, aged 93, on January 21 last year. Baker was a columnist for The New York Times. In 1977 he wrote a piece satirising a Manhattan party set-to between Norman Mailer and Gore Vidal, in which Baker matched Henry James (“working out on the big typewriter”) with John L. Sullivan (“hanging around James’s typewriter urging the great belletrist to discuss existentialism …”). 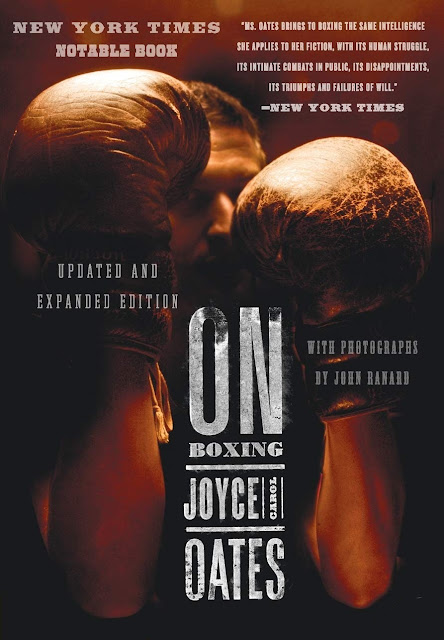 “No other subject is, for the writer, so intensely personal as boxing. To write about boxing is to write about oneself - however elliptically, and unintentionally.”
Joyce Carol Oates (1938?-) in her preface to On Boxing, 1987, written with a Remington manual portable typewriter, or was it a Smith-Corona by then?) 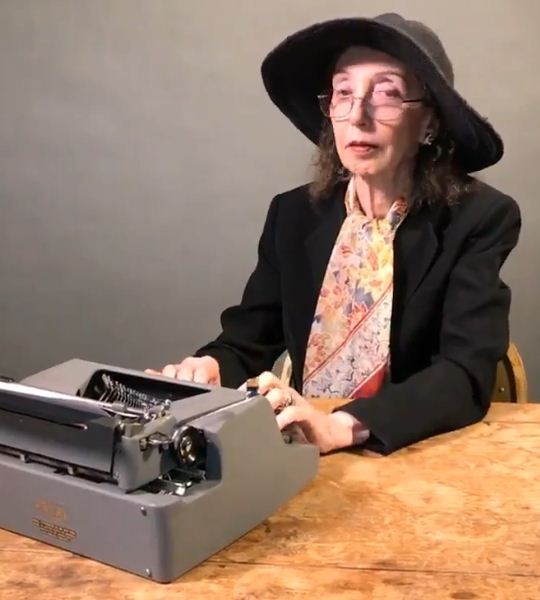 What is it about typewriters and boxing? (And Joyces who are boxing fanatics?) Richard Polt, of course, spent his formative years in Oakland, California, a place closely associated with at least two famous typewriter-wielding boxing writers. Well, one in particular: Jack London. The other was the man who gave the English language the word “hype”, Herbert Anthony Aloysius “Hype” Igoe (1877-1945), who came from Santa Cruz but spent time in Oakland. Igoe was considered by no less an authority than Damon Runyon as “probably the best informed writer on boxing who ever lived”. 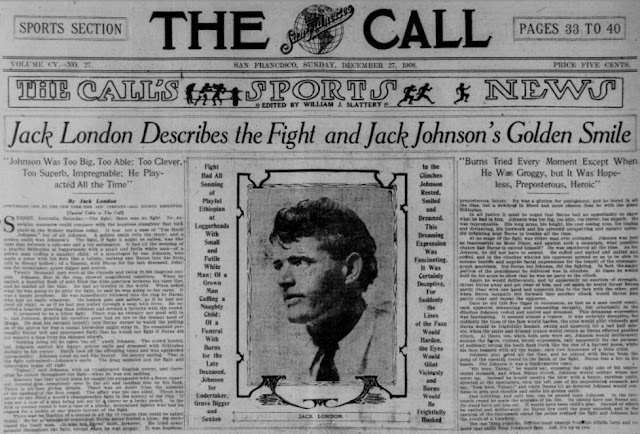 The other Oaklander, London, grew up in the East Bay area but didn’t write a lot about boxing. Yet by chance he came to cover arguably the most significant bout in history, the one in Sydney on Boxing Day 1908 when Jack Johnson became the first African-American world heavyweight champion. London boasted in his fight story in The New York Herald, “I often put on the gloves myself, and, take my word for it, I am really delightfully clever when my opponent is a couple of stone lighter than I am, half a foot or so shorter, and about half as strong. On such occasion I can show what I’ve got in me, and I can smile all the time, scintillate brilliant repartee and dazzling persiflage, and in the clinches talk over the political situation and the Broken Hill [Australian mining] troubles with the audience.” 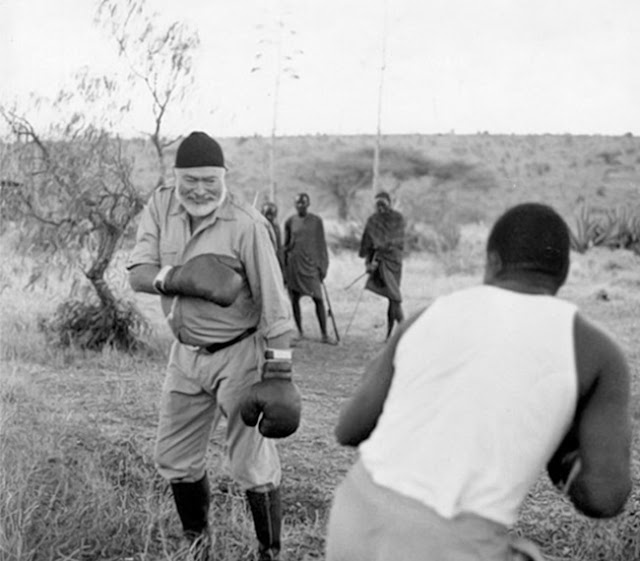 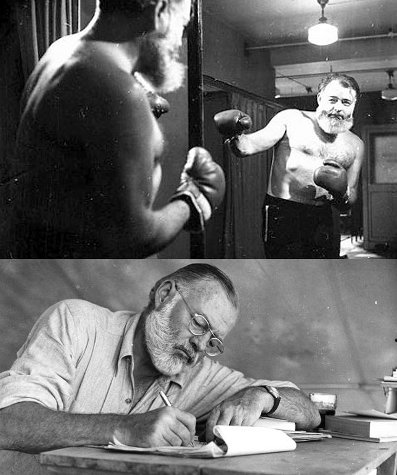 Following in the shuffles of Jack London, many other writers have put aside their typewriters and pulled on the gloves, most notably Ernest Hemingway, Albert Camus, Vladimir Nabakov, Norman Mailer and George Plimpton (the last two sat ringside together for the greatest bout ever, when Muhammad Ali beat George Foreman in Kinshasa in 1974).

In Paris in July 1922 Hemingway cajoled Ezra Pound into teaching Hemingway to write in exchange for Hemingway teaching Pound to box. Hemingway and his first wife Hadley also sparred with Gertrude Stein, until things got a bit ugly and Stein drew blood. Pound and Hemingway were part of Stein’s The Crowd, which jollied together at The Jockey. Another member was Mina Loy, whose Swiss-born husband, Fabian Avenarius Lloyd (better known as Arthur Cravan), was a nephew of Oscar Fingal O’Flahertie Wills Wilde, whose lover, Lord Arthur Douglas, was the son of the aforesaid Marquess of Queensberry, of boxing rules fame. Whether this dubious connection emboldened said Lloyd-Cravan is not known, but in the most brazen act yet of writer-crazily-takes-on-fighter, the begloved poet Cravan entered a bullring in Barcelona and faced none other than the mighty Jack Johnson. Johnson was, for the time being, cash-strapped and exiled in Barcelona, and needed funds to hire two American jazz bands for the café he was running. Cravan, described as a prototype for the Dada movement, was left gaga after six rounds of Johnson gesticulating rather than jabbing. 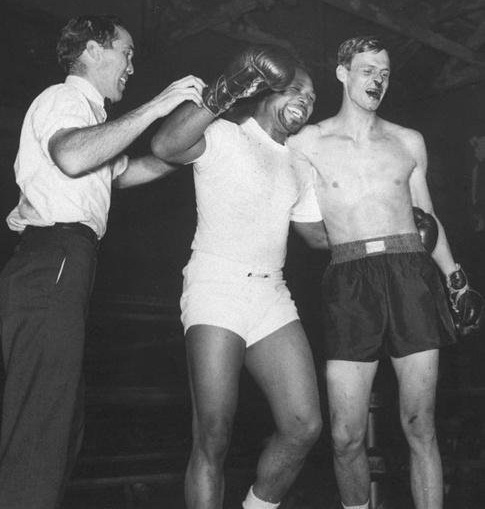 By comparison, Plimpton did actually go through the motions of boxing. In January 1959 Plimpton survived three rounds of “sparring” with the immortal Archie Moore in Stillman’s Gym in Manhattan for a Sports Illustrated story. There’s an hilarious blow-by-blow description by Plimpton of the day Moore “kilt some guy” at Stillman’s at The Sweet Science. Did Plimpton offer himself up for further humiliation, at the hands of “pound for pound, the greatest fighter ever”? It seems like half a million online experts (including Wikipedia) will have us think so, and that Plimpton also sparred with Sugar Ray Robinson – there’s even a photo which purports to show a bloodied Plimpton with a laughing Robinson. The truth is Moore felt he was too out of shape to play his 1959 self in the 1968 film of Plimpton’s 1966 book Paper Lion, so the script was changed and Robinson, at age 48, stepped in and sparred with Alan Alda, who was acting the role of Plimpton. Robinson was paid $1500 for a day’s light work. 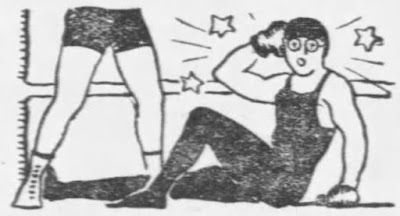 Plimpton had been inspired to face Moore after being told by America’s Cup yachtsman Mike Vanderbilt in Palm Beach in 1958 about another writer who’d challenged a champion boxer. And without a doubt, the funniest typewriter pounder versus punchbag pounder mismatch was when Paul Gallico took on Jack Dempsey while Dempsey was in Saratoga’s White Sulphur Springs preparing to defend his world title against Argentine’s Wild Bull of the Pampas, Luis Ángel Firpo, in September 1923. No so funny for Gallico, perhaps, but side-splitting for all those who saw Gallico, down on all fours, trying to hang on to the canvas and stop the ring from spinning backwards and forwards. Gallico, sent to Dempsey’s den by the New York Daily News, looked the part – he was 6ft 3, 190lb and had stroked the varsity rowing crew. But he had never boxed. Hype Igoe warned him Dempsey never took it easy on anyone, and the “bout” lasted 1min 37sec, most of it spent with Dempsey holding a groggy Gallico up and dancing. Gallico wrote, “I was assisted from the enclosure and taken some place else to lie down until my addled wits collected themselves sufficiently for me to get to my typewriter. I had a splitting headache and was grateful to be alive.” 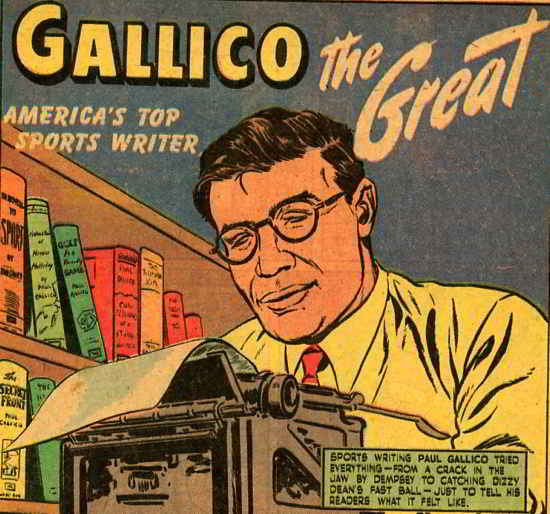 Dempsey might have made a dizzied mess of Gallico, but typewriters would, on behalf of writers, soon have their revenge.
TO BE CONTINUED
Posted by Robert Messenger at 11:51

I only kown of Dr. Joyce Brothers from her radio programs.
Interesting about boxing and typewriters. Perhaps because they were the tools of the trade for the day, they were easily used ringside.

Brilliant article, Robert, as always. Some of this I knew but quite a lot I did not. Who would have thought Dr Joyce Brothers would have been an expert on boxing?

Impressive report! Thanks for working me and my cities into it.