The Great Typewriter Graveyard: Britain, 1890-1900. Part I – The English and The Wrong Mr Right 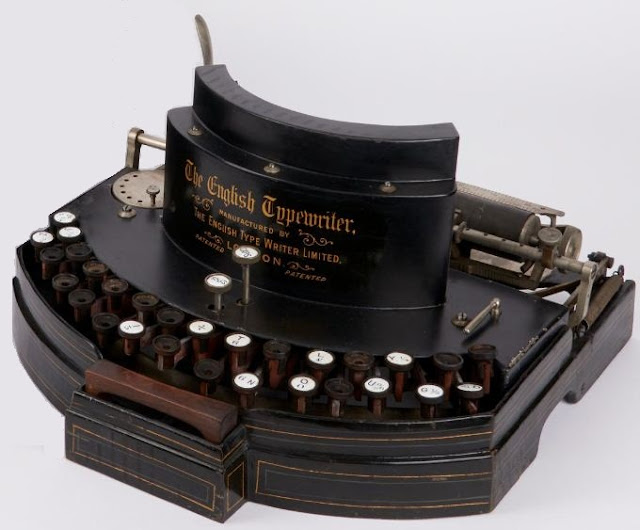 On the evening of Friday, January 19, 1900, Michael Hearn, a 53-year-old Indian-born typewriter inventor, dressed for the theatre at his apartment at 19 Harleyford Road, Vauxhall, London. He was intending, Hearn had told friends, to attend the 9 o’clock performance of George Howells Broadhurst’s The Wrong Mr Wright at the Strand. Hearn pulled on his dress coat, adjusted his white marcella cotton bowtie in the mirror, took a snifter of potassium cyanide and keeled over dead. The Lambeth coroner, Athelstan Braxton Hicks, inquired into Hearn’s death before a jury the following Monday afternoon, and the verdict was “suicide during temporary insanity”.
What brought on this madness, the court was told, was Hearn’s frustration that his “great idea”, a typewriter which would sell for five shillings, had failed to secure financing to “carry it through”. “The machine he was engaged on was not perfected,” The Liverpool Mercury reported, “the difficulty being to get money …” Hearn had written to Albert Edward Saxe-Coburg-Gotha, the then Prince of Wales and later King Edward VII, looking for a job, but the prince’s comptroller, Arthur Annesley, 11th Viscount Valentia, had replied regretting that he had no post to offer. Hearn had also written to Joseph Chamberlain, at that time the Colonial Secretary and de facto British Prime Minister, seeking help. When none was forthcoming, Hearn decided to end it all. 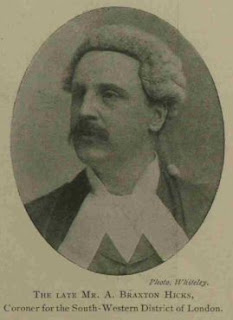 That Hearn had been a widower for 10 years and left behind a son and three young daughters didn’t seem to concern Coroner Hicks. It was his inability to raise the finance to manufacture his cheap typewriter that caused him to lose his mind. Hearn had already experienced one great failure in the business: his English typewriter enterprise had collapsed less than two years after being launched in May 1890. The English was, according to George Carl Mares in his The History of the Typewriter (1909), the first typebar machine of British invention to be placed on the market, with “a well-founded claim” to be the simplest bar and key machine devised to that time. The 87 characters employed 58 parts (keytop and keylever was a single part) with a mere 87 friction points.

Hearn was born in the old fort town of Alibag outside Mumbai in India in 1846. He was sent to England at the age of 15 to be educated at the Protestant Dissenters’ Grammar School at Mill Hill. He became an architect before branching into the typewriter business in 1889. Mares said Hearn was “the original patentee and inventor” of the English while his partner, Morgan Donne, was the “manufacturing manager and experimentalist-in-chief”. As such, Donne had his name attached to the 1890-91 patents, with Hearn described as secretary and Donne as manager of the English Typewriter Limited, a public company. 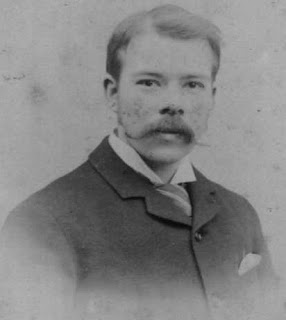 Morgan Doone
The 29-key English went on sale in mid-May 1890 and at the Edinburgh International Exhibition in October won a silver medal, behind a gold won by the Bar-Lock, with which Mares saw “a certain resemblance” with the English. The English was very heavily advertised throughout 1891, but in April 1892, 23 months after the English was first offered, surplus stock of 70 typewriters was auctioned off. A debenture holder’s petition had closed down operations. In December the already defunct company was called before London Lord Mayor Sir Stuart Knill in the Mansion House justice room over £4 for services owed to a Mrs Johanna Leitchen. Sir Stuart was told the company had been wound up and had no assets. The plant had been taken over by North’s Typewriter Company.  (For more on Hearn’s partner Morgan Donne and on the North’s typewriter, see part two of this series of articles.) 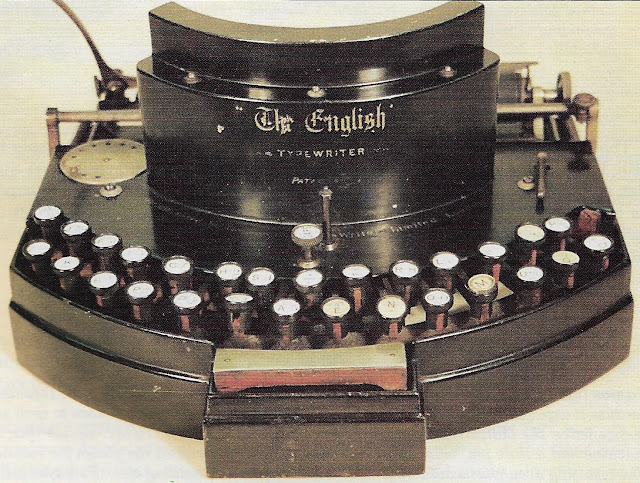 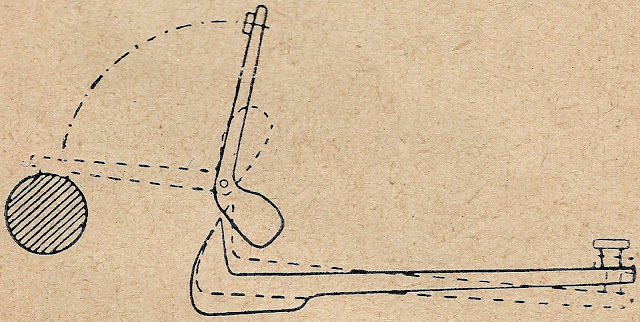 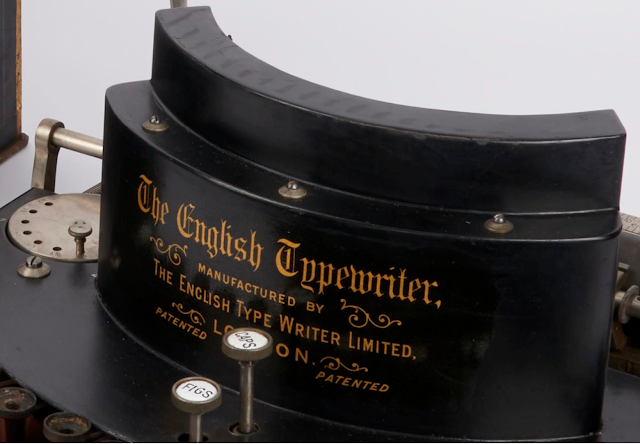 The English was not built for speed typing. The keyboard was too wide at 12 inches, and the shift keys were in the centre, above the character keys. The downstroke typebars were not connected to rods or springs but relied on a counterweight below their pivots, and on gravity. This caused sluggishness, double printings, bar collisions and damaged type slugs. G. Tilghman Richards, in The History and Development of Typewriters (1964), described spacing “obtained by use of a spiral spring contained in a drum round which a chain winds”. For all that, Mares believed the English deserved greater success, and Typewriter Topics agreed, saying the English had “more than passing merit”. It was certainly ahead of the Daugherty, Oliver and the Wagner-Underwood in producing “quite visible writing” (TT). (Similar claims were made about an earlier typewriter, the Canadian-made Horton, which was apparently even more short-lived than the English.) However, as Michael Adler pointed out in 1973 (The Writing Machine), visibility was negated on the English by the paper rolling into a drum behind the platen. 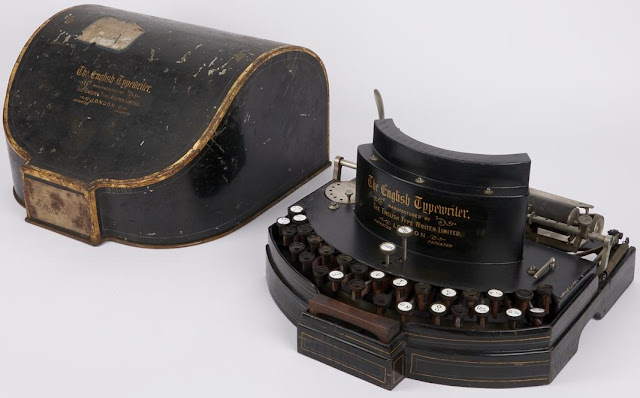 Hearn’s tragic death symbolically marked the end of a series of failed efforts to establish a British typewriter industry in the decade between 1890 and 1900. Hearn had provided the brain power behind the English, and it had been the first in a long line of British flops. Models such as the Royal Bar-Lock and the Empire were marketed in such a way as to make them appear to be of British origin, but they were of American design (from Charles Spiro and Wellington Parker Kidder respectively) and were made outside Britain (the Bar-Lock in the US and the Empire in Canada). Even Blickensderfers bore shields implying they were British-made.

Britain’s lack of properly trained typewriter factory workers was a major drawback; in 1901 a US newspaper headlined a story, “Can’t make typewriters: Manufacturers say British workmen are no good.” But finding the capital to set up typewriter factories was the greatest impediment. In The History of the Typewriter, Mares pointed out capital invested in US typewriter manufacturing had risen from $US1.3 million in 1890 to $US8.4 million in 1900. Nothing like that sort of money was available in Britain, where expectations of profit margins were far, far lower.

Milton Bartholomew, managing director of the Union Trust-controlled Yōst Typewriter Company on the Holborn Viaduct in London, told the London Daily Mail in April 1901 that typewriters wholly produced in Britain cost 20 per cent more than those shipped in from the US, even after accounting for freight and tariffs. Typewriter Topics was to remark on Britain’s “years of hard struggle and vicissitude owing to the lack of experienced technical typewriter men and of trained typewriter labor in England”. 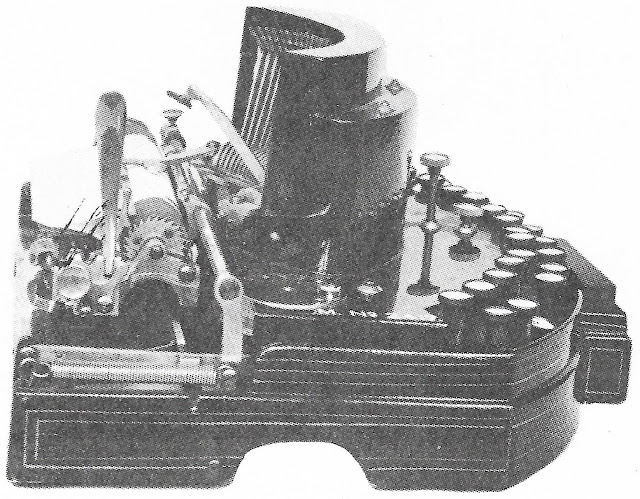 When the tide finally began to slowly turn, in the first decade of the 20th Century, it wasn’t through British endeavour but American expertise. The sea change – washing over the flotsam of at least six British typewriter company wreckages - came across the Atlantic in the person of Hidalgo Moya, who left his position as manager of the Hammond Typewriter Company in Kansas City, Missouri, in June 1899. Moya sailed from New York to Liverpool on the Umbria to take up a post as Remington’s representative in England. Unbeknown to Remington, however, Moya had, since 1897, been working on plans to make a typewriter in his own name. The first model Moya appeared in Leicester on November 18, 1902, and at five guineas, was exactly one quarter of the price of imported American-made machines. Admittedly, the Moya didn’t hold a candle to the like of the Underwood, but it worked and it was affordable. 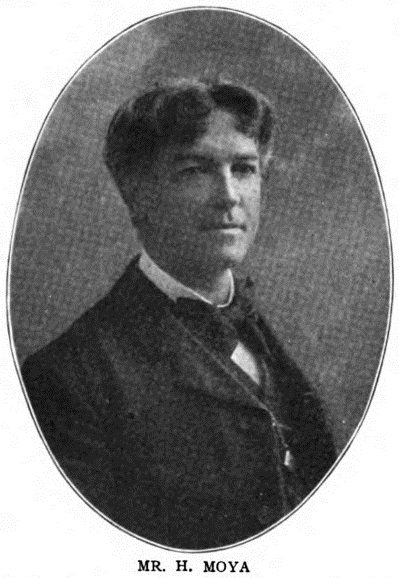 Where Moya held a distinct advantage over others who had sought to establish typewriter manufacturing in Britain was in his considerable experience in the trade in the US - starting in 1893 - coupled with his mechanical skills and knowledge of what was required to make a typewriter not just work but keep working. Importantly, he was not overly ambitious, unlike some British counterparts, who in efforts to capture the market for home-made machines had tried to take the typewriter beyond the point to which it had been developed in the US. Moya was not interested in proportional spacing, for example, but in making a typewriter with seven-eights of the parts used in high-priced machines, and marketing it at a much more reasonable price. (Mares noted the peculiar propensity of the British toward proportional spacing typewriters during the 1890s, including such vain attempts as the Maskelyne and the Waverley. Mares called it “the fetish of English-made typewriters …”) 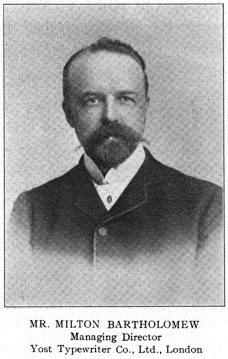 The Yōst company’s English manager Milton Bartholomew was biting in his criticism of British typewriter manufacturing when the London Daily Mail interviewed him in 1901. The Mail had set out to find “Why there are so few British typewriters on the market” (there were just two, it said, the Salter and the North’s). Bartholomew pointed out that in 1891 Caligraph had set up a factory in Coventry, but even with using American tools and material “it was impossible to produce a good machine”. 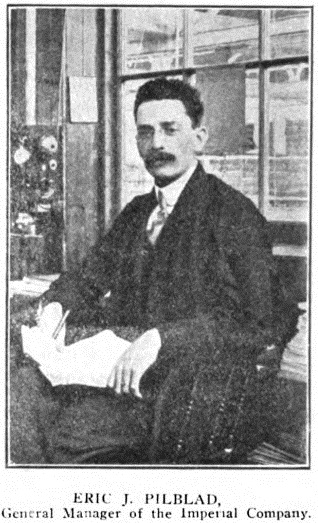 Indeed, it wasn’t until June 22, 1908, the day the Imperial Typewriter Company was incorporated in Leicester, that Britain finally managed to start producing an internationally competitive typewriter - Moya’s ingenious Imperial Model A (“unique and unconventional [but] backed by real science” and “a triumph of technic” said Typewriter Topics). Even when, in 1911, Moya took a few steps back from his typewriter work to build violins, Imperial went overseas to get a replacement general manager - Eric Julius Pilblad. Typewriter Topics recalled that this was “a marked step forward” for Imperial, as Pilblad had “exceptional training, not only as a practical engineer, but as a successful organiser in the mass production of component parts of typewriters … He was discovered making rifle sights for Canadian Government and his experience has been of the greatest value to the Imperial company in perfecting the production of typewriters in Leicester.” 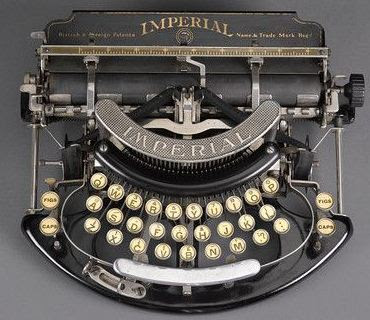 The Imperial Model A was the first British-made typewriter deemed worthy of selling on the demanding US market, a remarkable turnaround after two decades littered with fiascos. In 1909 Typewriter Topics’ European director Gustave Hermes said the Imperial was “bound to find its way to the other side of the Atlantic in due time”. At the 1910 Brussels World’s Fair, the Imperial won a gold medal in competition with such leading American brands as Underwood, Remington, Smith Premier, Monarch and Yōst, as well as the German Continental. By 1914 Imperial had a New York City-based distributor, Walter Edmund Hill, recruiting territorial agents across the eastern seaboard. At long, long last, "British-made" had come to mean enduring quality for typewriter buyers worldwide. 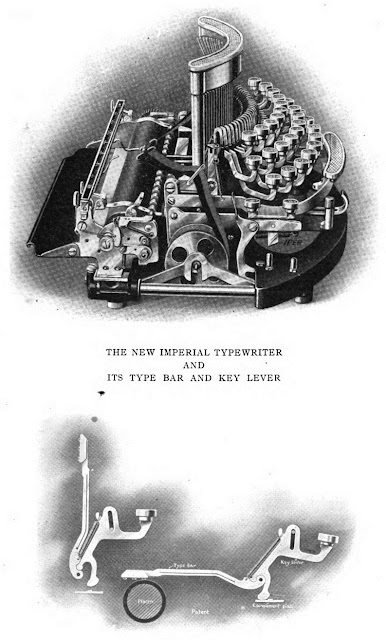 Posted by Robert Messenger at 17:12

Hearn's fate is one of many tragedies and failures in the history of typewriters. I have to say that his design looks flawed, although I would be thrilled to own one of his writing machines.

Looking forward to more in this series, thanks.

Hello I appear to be Michael Hearn's great grand-daughter and I am thrilled to find he was a typewriter inventor as I myself own 23 typewriters and like them very much. Does anyone know anything more about him? Thanks
Anna (Ryder nee Dowden)