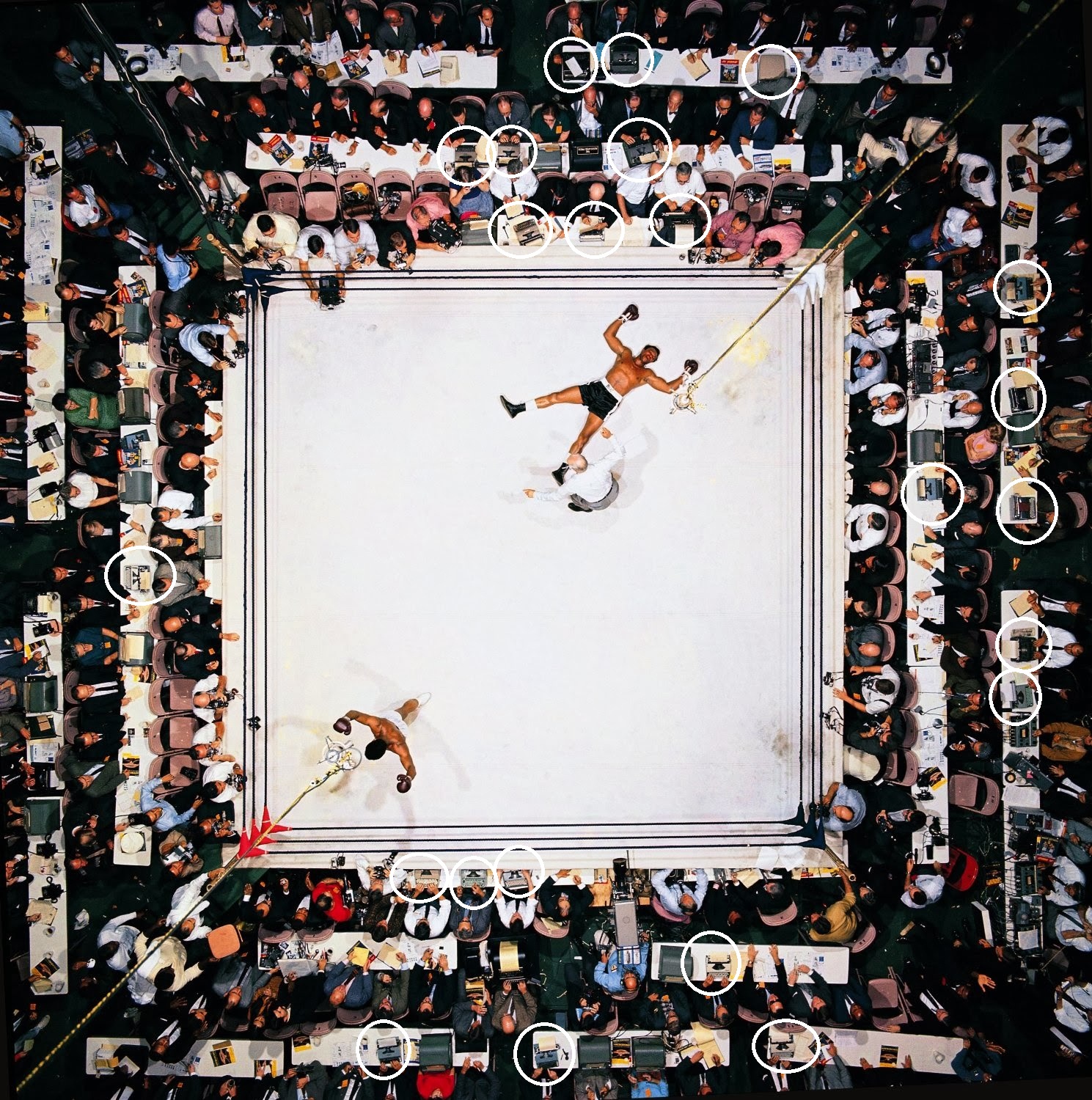 I counted 22 portable typewriters being used by ringside reporters working before a then world record indoor crowd of 35,460 - four Olivetti Lettera 32s, three Olivetti Lettera 22s, three Olympias, two Royals, a Hermes Bay and a Hermes 3000, plus eight I couldn't identify (I think I accidentally circled one of the many portable telex machines around the ring). See how you go with it: 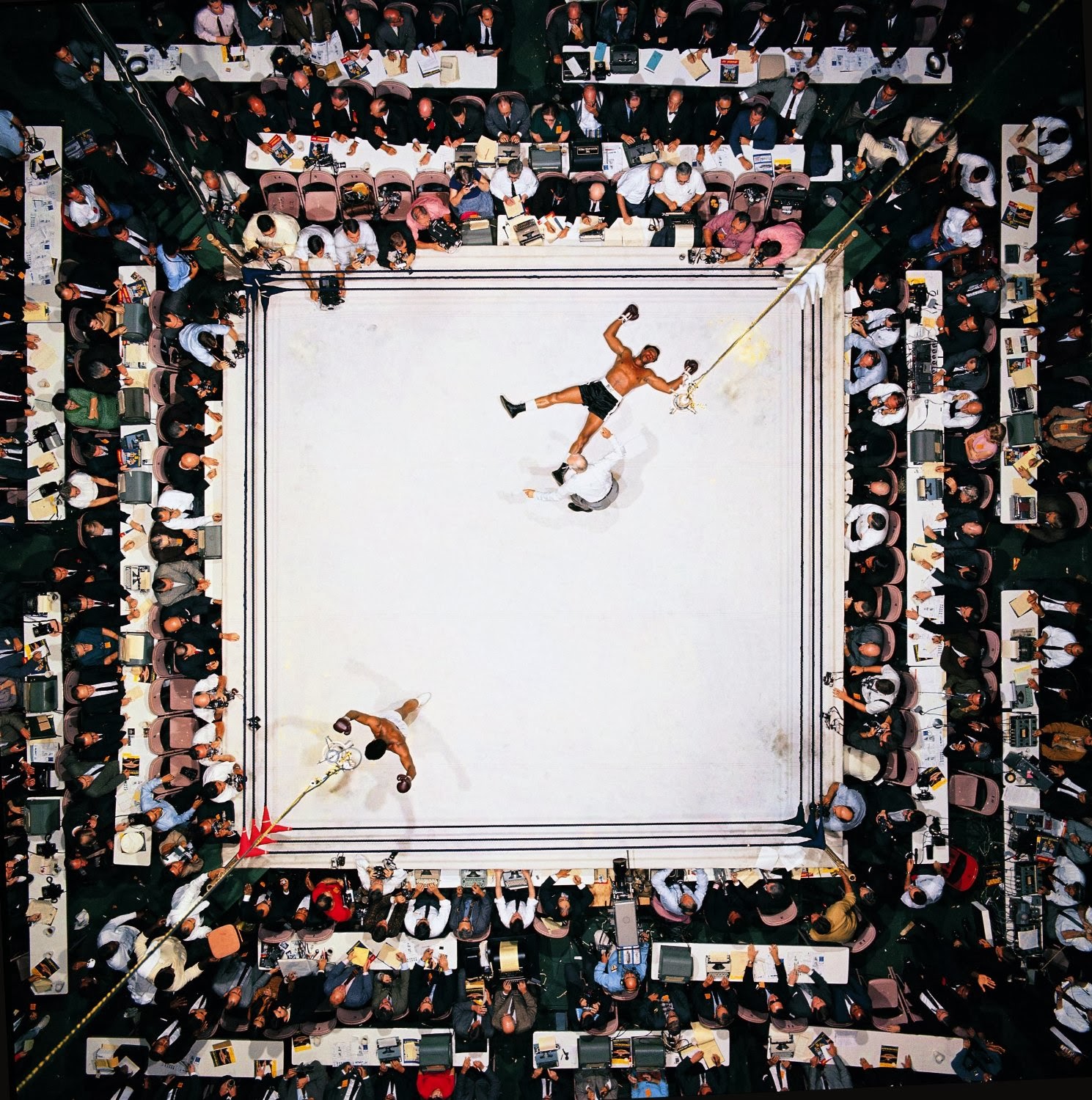 The overhead photo was shot by Neil Leifer for Sports Illustrated. One minute, eight seconds into the third round, Muhammad Ali is slowly making his way back to his corner as referee Harry Kessler counts down a spreadeagled hometown hero Cleveland "Big Cat" Williams in a one-sided world heavyweight title boxing match at the Astrodome in Houston, Texas, on November 14, 1966. Ali's TKO is regarded by many experts as his finest performance, but that opinion obviously doesn't take into account Williams's poor health, nor Ali's win at the Stade du 20 Mai in Kinshasa in October 1974. 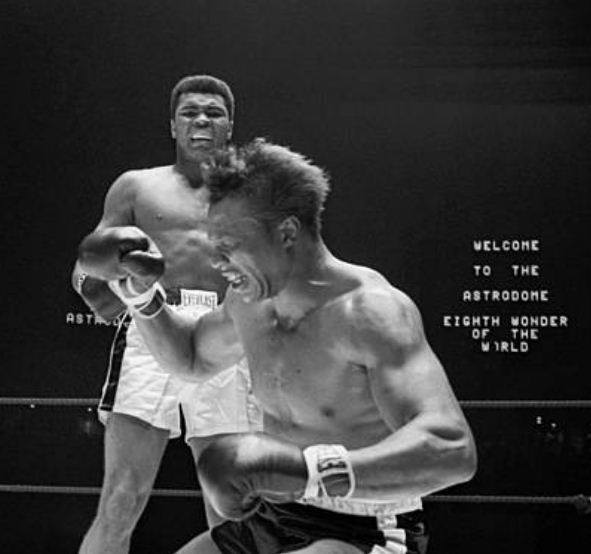 Just two years before he faced Ali, on the night of November 29, 1964, Williams was stopped by Dale Witten of the Texas Highway Patrol for suspicion of speeding. During a scuffle Witten fired his 357 Magnum and the bullet ripped through Williams's colon and right kidney, lodging against his right hip. In hospital he stopped breathing three times on an operating table. He had four operations over seven months, but he lost the kidney in June 1965, as well as more than 10 feet of small intestine, and the bullet remained in his body. Williams's purse for the Ali fight was absorbed by his 1964-65 medical costs of $67,615 - so he went into the ring against Ali knowing he would be taking a beating but getting not one red cent out of it. It was 21 years ago this week that Williams, returning home from dialysis treatment, was knocked down by a car in a hit and run accident while walking across a street in Houston; he died 12 days later, on September 15, 1999, aged 66. 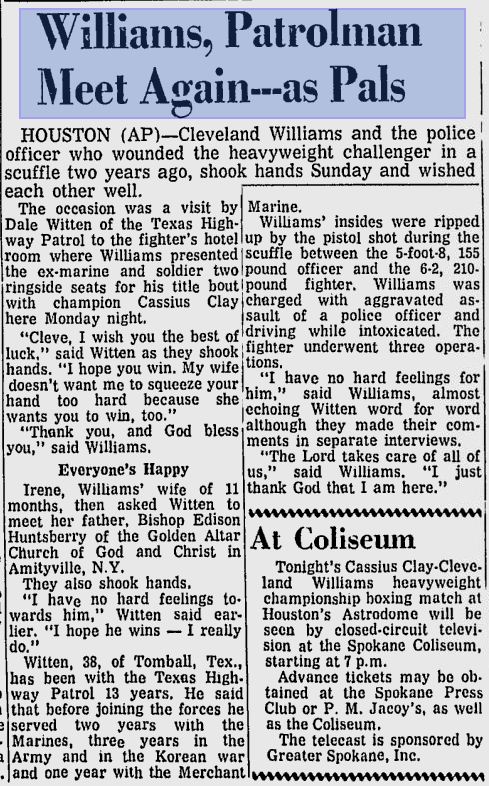 The Spokesman-Review, Monday, November 14, 1966.
Where the Williams-Witten story diverges from parallels with today's Black Lives Matter issues in the United States is that Witten visited Williams to wish him luck the day before his fight with Ali, with both men saying they had "no hard feelings" toward the other.  Williams gave Witten two ringside tickets, which he used to sit among the portable typewriters.
Posted by Robert Messenger at 20:58

What an amazing photo. I think the clicking of all those typewriters must have added to the drama.