The Demise of Spikus vulgaris

I don’t get my news from Facebook, so its threat to Australia won’t bother me. One reason I look elsewhere for news is that what appears on Facebook is usually what we old print newspaper hacks call “unsubbed”, which means it’s beneath contempt. Shaun Micallef’s weekly Mad as Hell take on Sydney Daily Telegraph headlines is a fair indicator that sub-editors with even the most tenuous grasp on the English language no longer work for Rupert Murdoch. 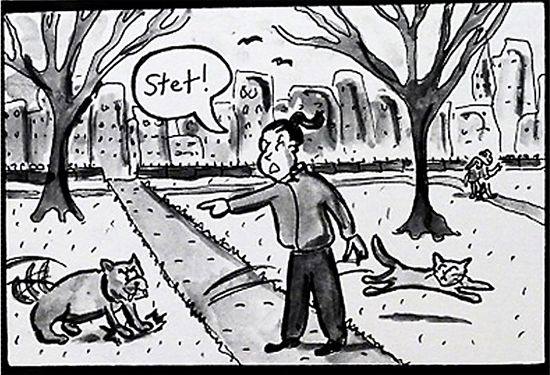 The other day an old newspaper friend mentioned that seriously endangered species Spikus vulgaris, better known by its common name “sub-editor”. There obviously aren’t many still employed in Australia or New Zealand, nor in Britain or, it seems, the United States (where they were called copy editors). Their demise has been a long time coming. More than 27 years ago Robert Richardson, author of the “Ode to the Ancient Sub-Editor” (see below), declared in the London Independent that Spikus vulgaris was “a retiring beast inhabiting the jungle of journalism.” That jungle has now overrun the sub-editor, so it’s worthwhile looking back on what Richardson described.
“On morning papers, he - the female of the species was not discovered until the ’60s, so the masculine pronoun will suffice - spends his life in the twilight zone, arriving anonymously in the afternoon, ruminating over spelling and syntax as the day dies, and padding softly into the night when all is finished. For him there are no picture bylines, no glamour of a regular column, no politicians seeking his ear or agents lunching him at Le Gavroche, no encounters with the rich and famous, no lucrative appearances on television chat shows. His gifts are unsung, his merits undervalued, his contribution scorned, his . . . (That's enough poncy phrases. Get on with it - Ed.) 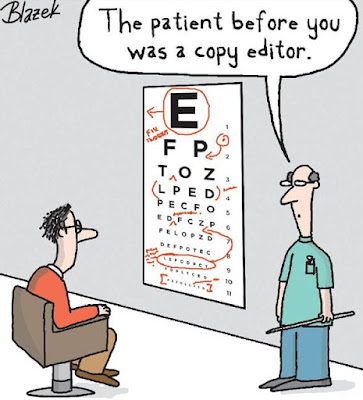 “Subs are the people who make sure there is always exactly enough material to fill each day's paper and that it bears some resemblance to sense. Their creative input comes principally in the form of headlines, and any gathering of the tribe eventually lapses into nostalgic recall of classics. One example of this high art must represent all the rest. Many years ago, the Hollywood actress Gloria Swanson arrived in Southampton on a Monday, after crossing the Atlantic on the Queen Mary; at her dockside press conference, she complained that it had been an awful voyage and she had been violently seasick. A forgotten sub headlined the story 'Sick transit Gloria, Monday'. That, children, is true genius. 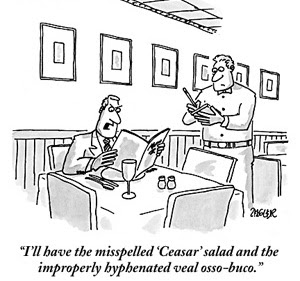 “From the reporters' (or writers', as some preciously insist on being called) point of view, the sub is either friend or a tacky form of life that they are faintly surprised to discover has mastered the art of walking upright; it is a relationship now symbiotic, now hostile. There are writers who consider their prose only slightly below God's on a good day and visibly bristle at the heresy of removing a comma; queries regarding style/ accuracy/ clarity/ sense/ grammar/ are akin to suggesting that their daughters sell their bodies nightly behind King's Cross station. Others grasp the fact that if the sub does not understand their copy, there is a possibility the reader may not either; that an adjective should not be used as an adverb; that there really is a law of libel; that 58-line paragraphs written all as one sentence take on a certain tedious quality fairly quickly. 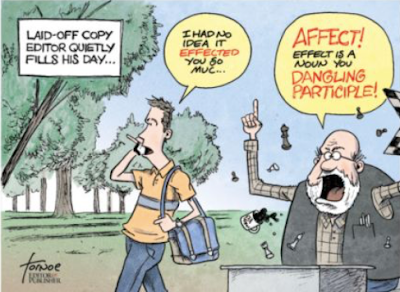 “One common curse of the sub's life is the writer who inserts some alleged fact, adding the memo 'Subs please check'. By the time his copy reaches the subs, all known sources of checking are unavailable and the writer is in a wine bar without a telephone, surrounded by beautiful women inexplicably impressed by a 12-point byline. Back at the darkened office, the sub vainly consults the library, pores over reference books, and finally tosses a coin in despair. If the published fact is correct, the writer takes the credit; if wrong, it was the sub's fault. But all this, of course, concerns the Good Sub. There is also the kind of sub who would brutally chop the final couplet off a Milton sonnet or cut the Ten Commandments down to six because they wouldn't fit the space; the kind who can take any well written piece and cold-bloodedly butcher it; who uses 'gilding the lily' in a headline and all the saints since Peter could not persuade him it's a misquotation.
“Know him by his markings - shabby sports jacket and pullover, dirty fingernails, overweight, bored, impregnated with the faint odour of a four-ale bar, obsessed with the times of trains that take him home - and avoid him. As the great Samuel Johnson said dismissively of the compilers of dictionaries, the sub-editor is a harmless drudge.”

ODE TO THE ANCIENT SUB-EDITOR
It was an ancient sub-editor and he stoppeth many libels,
Fowler's Modern English Usage and the ODWE were his bibles.
We met in the Bodoni Arms, it was his favourite venue,
He sat alone, a pint in hand, and made corrections to the menu.
"Pray tell me, master sub-editor, your secrets and your tricks,
"How many prima donnas you have saved from looking pricks."
He raised his head and gazed at me with a piercing, bloodshot eye,
“'T'would be my pleasure, sir," he said, "but I am rather dry.
"A double brandy will suffice; it helps soak up the ale,
"You get 'em in, then I'll begin to tell my subbing tale."
I hastened to the bar and bought the drink that he desired,
Convinced that what he told me would be sober and inspired.
Returning to the table, I set the glass within his reach
Then sat, a humble acolyte, as he composed himself to speech.
"In the beginning was the word, but which word we'll never learn
"Because a sub deleted it to avoid a widow turn.
"And in the Gospel of St John, one chapter seems too terse,
"Where the two-word sentence 'Jesus wept' appears as just one verse.
"A sub-editor did that, my boy, and I shall tell you why:
"He had to make a par somewhere 'cos the text was one line shy.
"And so it goes, from age to age, in every realm and land,
"You'll find the diligent sub-editor, a style book in his hand.
"We guard our Mother English tongue, keep her pure and unalloyed,
"Just see what dreadful things go wrong when our talents aren't employed.
"We'd have asterisked out those filthy words Lady Chatterley learnt from Mellors
"And if Dickens had but had a sub, his books would be novellas.
"We know 'can' from 'may' and 'may' from 'might',
"And never say 'less' when 'fewer' is right,
"We punctuate punctiliously and are alert for innuendoes,
"We can all spell 'desiccated' and don't rise to crescendos.
"Of grammar and of syntax our knowledge is formidable,
"Though frankly we don't give a toss about an unstressed syllable.
"To denigrate the sub-editor is the action of a moron,
"A word that very nearly rhymes with that little twat Giles Coren.
"When it comes to writing headlines, polysyllables we eschew,
"We have a taste for shorter words, like 'mull' and 'ire' and 'rue'. "
"Your wisdom overwhelms me, no counsel could be finer,
"But can you explain to me, I beg, the role of the designer?"
"Don't speak to me of that lot!" (He gathered spit - and spat),
"A paper needs designers like an oyster needs a hat.
"Oh they'll draw you pretty pages, you can't change them 'cos it's art,
"Then once you've made the copy fit, they rip the thing apart.
"The reason why they do that is a mystery to man,
"But I've a shrewd suspicion that it's just to show they can."
I feared I had offended him, my question had been crude,
But a treble double whisky put him in a better mood.
"And tell me of your colleagues, whose work is so essential,
"That I might dare approach them with demeanour reverential."
"Right across Observer the subs are brilliant, off the scale,
"The Times can only dream of such - and f*** the Daily Mail.
"But even with such talents, sir, once the story's in the queue
"And is 86 lines over, what magic can you do?"
The old sub smiled and shook his head as if he were amused
At meeting one so young and green and easily confused.
"Nothing is writ that can't be cut, that is the Subbing Law,
"Give me the Ten Commandments and I'll trim them back to four.
"Thou shalt not miss the deadline, or write in 'Subs please check',
"And if perchance you use a fact, don't get it round your neck.
"But the first of all commandments you must follow to the letter:
"However good your copy is, a sub can make it better."
"And yet," I ventured cautiously, "can what they say be true?
"I've heard tell that the management wants to get rid of you."
'''Tis true," the gloomy sub replied, now glugging down red wine,
"They got rid of the NGA, now we're the next in line.
"But mark my words, young journalist, the cup they drink is bitter,
"Mistakes will sprout like dandelions and literals will litter.
"Comment it may still be free, but faith in facts will shatter,
"Whatever garbage fills the space, that's all that's going to matter.
"And there will come a day, I fear, when one sub shall remain,
"Facing those damned accountants and battling in vain.
"He'll stand astride the subs' desk like that Dutch boy at the dyke,
"Until, professional to the last, he falls upon his spike.
"And as those bastards stand and jeer, a golden age shall cease,
"But not before his dying words: 'Has the lawyer seen this piece?'
"They'll bury him with honours, even Murdoch will be there,
"FoC will read the Lesson, Rev Indent will say the prayer.
"Good Spot will start the banging out, as flags fly at half mast,
"A choir of solemn hacks will sing 'Oh Sub, our help in ages past'.
"And in the years that follow that tragic last defeat
"You'll find the Tomb of Unknown Sub in St Bride's upon the Street.
"On either side shall angels weep, and proudly in between
"You will see a pencil, blue, crossed with an eyeshade, green,
"And on Carrara marble, carved in ninety-six point caps,
"You'll read subs' eternal question: 'Who wrote this piece of crap?'"
Posted by Robert Messenger at 15:28