What a Wonderful World With Typewriters 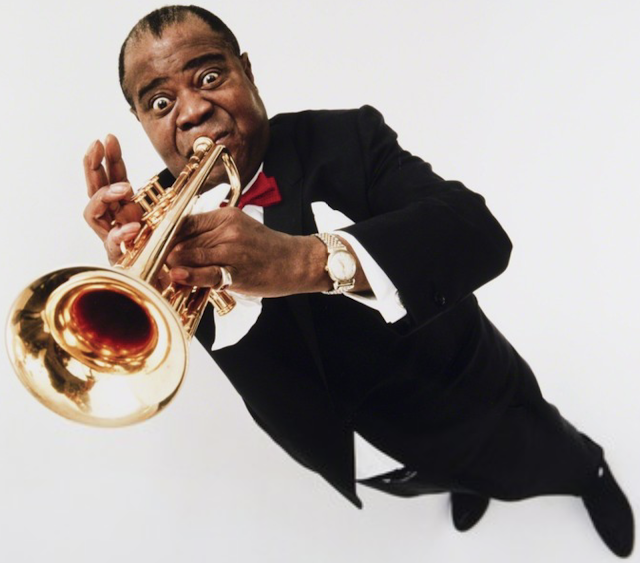 ‘Man, I'm a two-fingered blip on my portable typewriter.’

- Louis Armstrong to a radio interviewer. 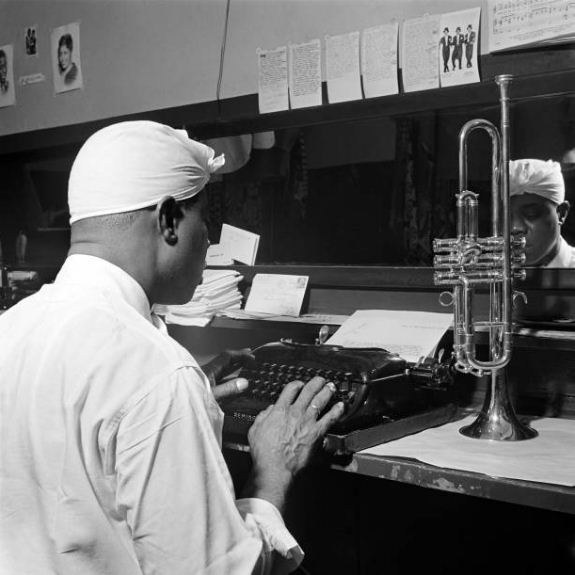 In January 1952 US newspapers headlined the story, “That Satchmo Saga – Literary Field Is Invaded by Famed Trumpet Player”. Louis Armstrong’s road manager Pierre “Frenchy” Tallerie had announced in Spokane, Washington, that Armstrong was writing his life story, again. “Armstrong does most of his writing after his playing engagements,” the newspapers reported. “often working at his typewriter until 6 or 7am.” 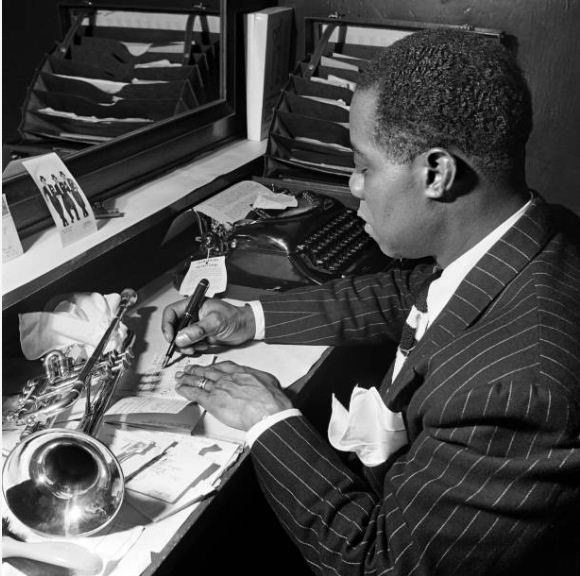 That Armstrong took a Remington 5 portable typewriter with him on the road was already well known. Regina, Saskatchewan Leader-Post columnist Kathleen Kritzwiser noted in her “KMK” review of Satchmo’s performance at the Regina Armoury in June 1951, “In a 15-minute interval [Armstrong] sat down at his typewriter and in between interruptions to autograph anything from a pie-plate to a torn tab of paper, he typed away at a letter.” 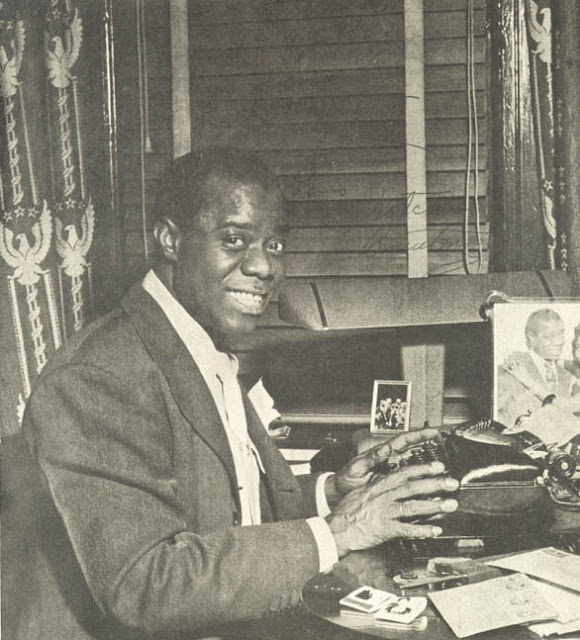 This had been Armstrong’s standard practice for the best part of the previous 29 years, though not that long on his Remington 5. In Giovanni Russonello’s New York Times article about the Louis Armstrong House Museum in November 2018, Russonello said “When Armstrong joined King Oliver’s famed band, he brought along a typewriter.”  That would date Armstrong’s typewriter use back to 1922, when he moved to Chicago at Joe Oliver’s invitation to join Oliver's Creole Jazz Band. There is in his archives, indeed, a typed letter to Isidore Barbarin, written in Chicago in September 1922. If Armstrong did own a portable typewriter back then, it was more likely to be a Corona 3, a three-bank Underwood or a relatively new Remington (or, dare I say it, a Blickensderfer or Folding Standard). But, then, considering Armstrong’s remarkable life, anything seems possible. (We know for certain that in later life, Armstrong used a Smith-Corona portable, which was appropriate – from 1943 he lived in Corona, Queens.) 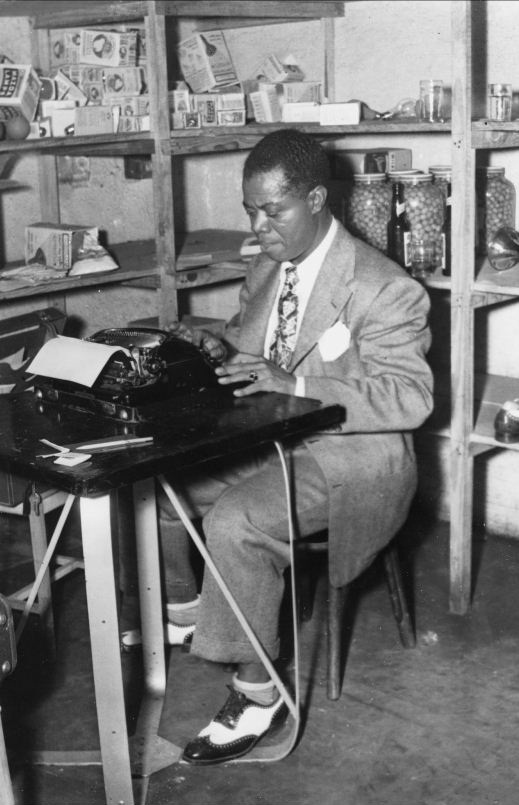 Baltimore’s The Afro-American newspaper reported in May 1946, “Louis showed the Afro a big joke book he always carries around with him, in which he types jokes told him by theatrical people … For this purpose, he also hauls around a portable typewriter. ‘This is a lot of fun. I’ve been doing it for years as a hobby,’ he said.” In May 1950 Jack Gaver of United Press wrote from New York in The Pittsburgh Press, “When Louis Armstrong isn’t on the stage of the Roxy Theatre blowing his trumpet and singing [in] that wonderful style of his, you’ll find him in his dressing room pecking away at his typewriter … Louis writes in the same racy style he uses when he speaks and this is as distinctive as his manner of singing. He wants no part of ghost writers.” 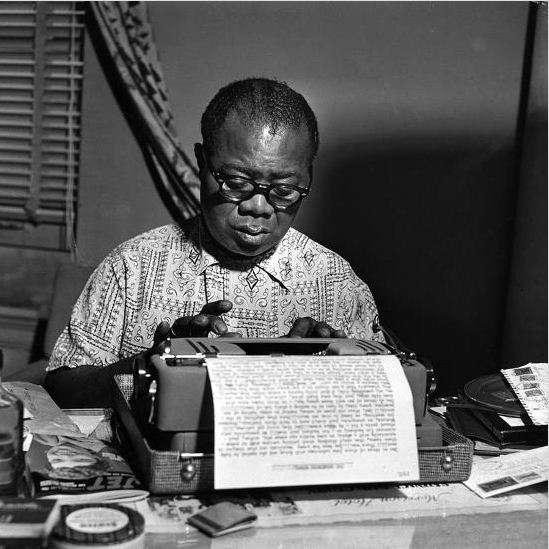 By the time of his death in his sleep at Corona, on July 6, 1971, aged 69, Armstrong had accumulated a body of writing which included two books, dozens of magazine and newspaper articles, 10,000 letters (mostly to fans) and a sizable cache of unpublished autobiographical manuscripts, most of which made their way into the Armstrong Archives at Queens College. He published an autobiography, Swing That Music, in 1936, and another, Satchmo, My Life in New Orleans, in 1954. He typed enough lengthy jokes to fill an entire book. As well, in 1969-70, Armstrong wrote a 77-page essay about his relationship with the Karnofskys, a Jewish family in New Orleans. When he was seven, he worked as a servant in their house, and they recognized his musical talent early, advancing him a small amount of money to buy his first cornet. The essay is included in a posthumous book, Louis Armstrong, in His Own Words, by Thomas Brothers (1999). 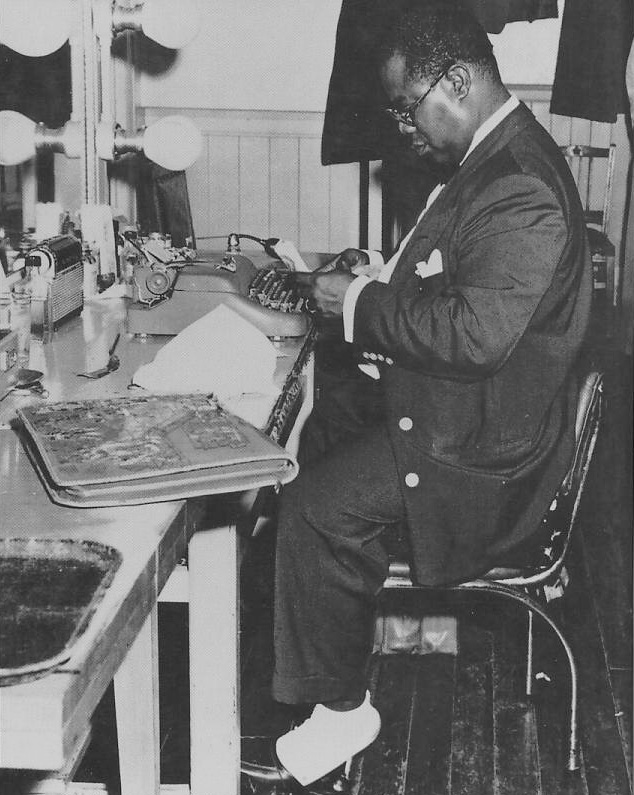 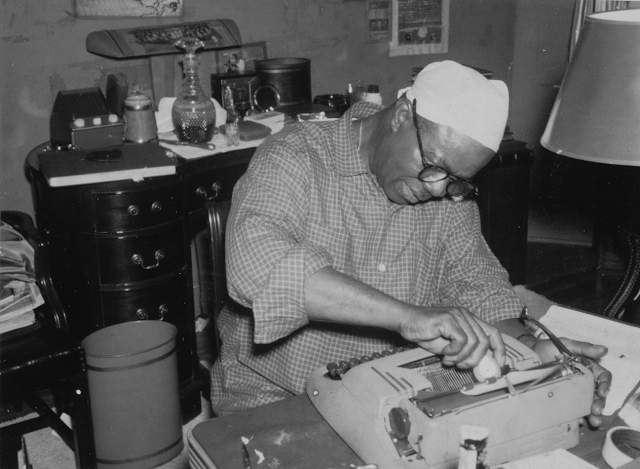 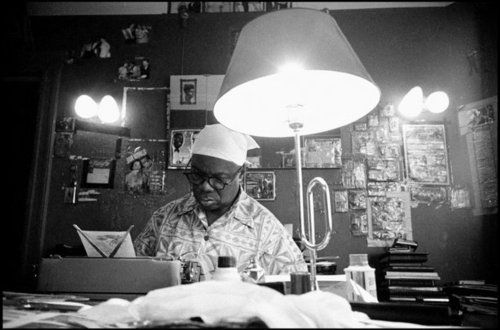 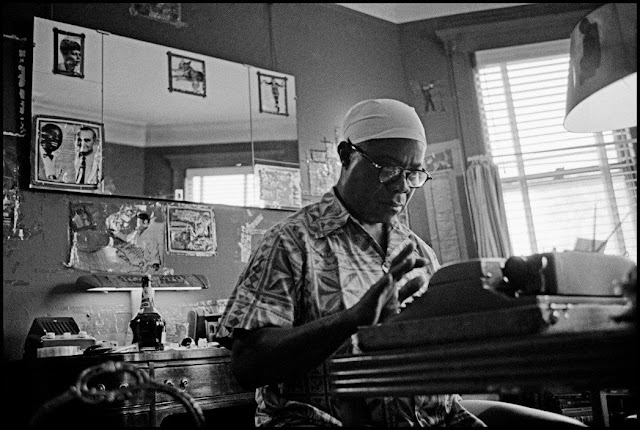 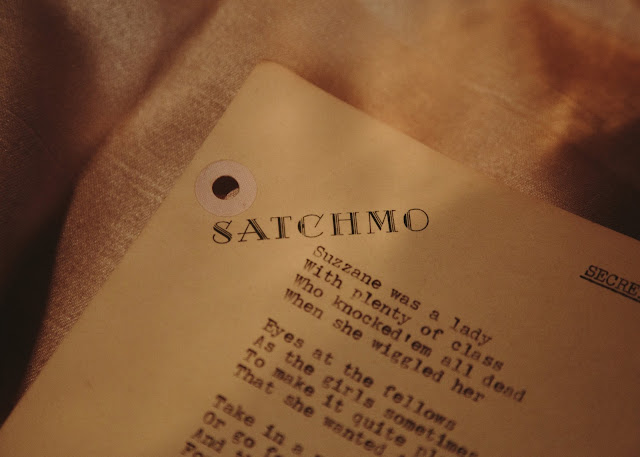 Satchmo is a great story to start the day with. I heard that he was a typewriter fan but I didn't know how the typewriter was such a part of his life. Great pictures of a great artist.

Thank you so much,

Wonderful photos, thanks, Robert. (But I must point out that that's no Noiseless.)

Wonderful article! And I notice he not only used a Remington Portable #5, he also used an Eversharp Skyline fountain pen. A great musician, with good taste in writing instruments!