"His Typewriter's Covered and Silent ..." Zach Brogan and the Poetry of Berton Braley 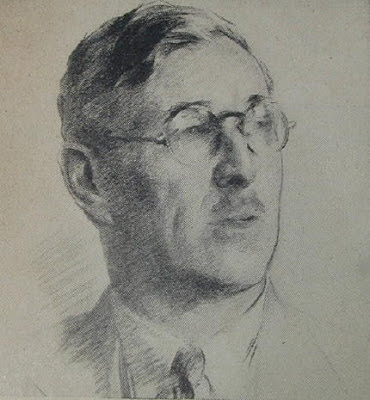 Berton Braley
In early May 1914, a veteran Irish-born reporter, Zachariah Brogan, died a miserable, lonely death beside the Northern Pacific railway line three miles east of Columbus, Montana. When his body was found by a section crew late in the evening of June 1, it was badly decomposed and partly eaten by birds. Brogan had put down a sachel of clothes and note books, rolled up his overcoat, laid his head on it, and died in his sleep. He would have turned 71 on July 12. Word of his death reached his family in Leavenworth, Kansas, on June 4. His son initially believed Zach Brogan had been killed in a railway accident, while on his way from Butte, Montana, to Tacoma, Washington. A printer by trade, he had been working as a newspaper reporter in Butte, but in Leavenworth he was remembered as a world-class checkers player.

Is the journalists' traditional sign-off “30” – also the number of pieces in some versions of the game, or the number of minutes in some matches - an added clue to Brogan’s checkers fixation in Berton Braley’s 1915 poem “The Dead Reporter”. Braley had also worked in Butte as a reporter, and may well have gotten to know Brogan. Brogan certainly seems the sort of colourful character who would have interested Braley.

I came across Braley’s “The Dead Reporter” - published in his collection Songs of the Workaday World - after being alerted by an ex-Irish Press colleague to an updated, PC-ed version of another of Braley’s poems, “Type Was Made To Read”. Braley wrote this for the March 1915 edition of the Linotype Bulletin. As the subject matter is close to my heart, I couldn’t resist adding a fifth stanza to the verse, one referring to the type produced by typewriters. After all, Braley did come from near the home of the typewriter.

Braley was born in Madison, Wisconsin, on January 29, 1882. He was published for the first time at age 11, a fairytale called “Why The Grass Is Green” in The American Youth. In 1905 he graduated from the University of Wisconsin and began work as a reporter at The Butte Daily Inter-Mountain (predecessor of the Butte Daily Post). The next year Braley switched to The Butte Evening News and later worked for the Daily Gazette. In 1909 he moved to New York and worked for Life magazine and the New York Evening Mail. He was at one time an associate editor of Puck magazine and sold poems to the Saturday Evening Post. Braley joined the Newspaper Enterprise Association in 1911 and the next year started writing for McGraw-Hill magazines and for United Press. From 1915-16 Braley was a special correspondent in northern Europe for Collier's and from 1918-1919 as a special correspondent in England, France and Germany. In 1922 he travelled through the Orient and in 1927 was a correspondent in London. He died of cancer in St Petersburg, Pinellas County, Florida, on January 23, 1966, aged 83. 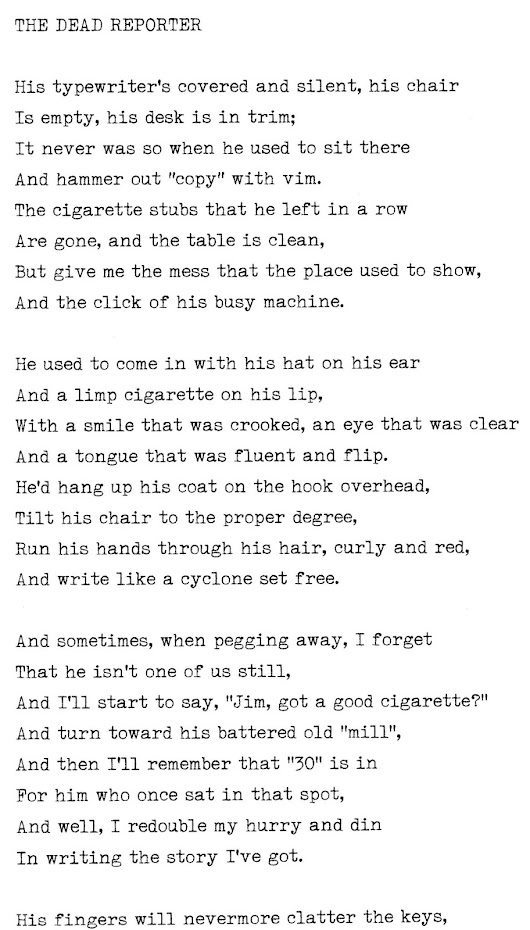 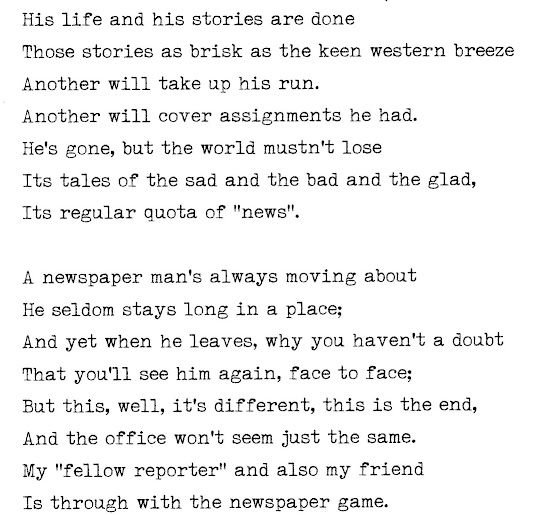 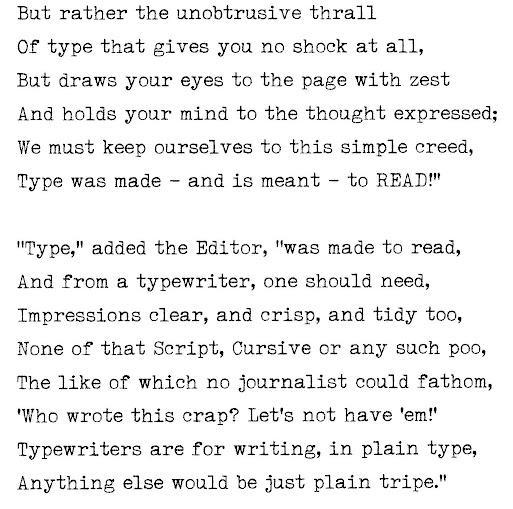 Posted by Robert Messenger at 21:43

-30-
is what a reporter types (or used to type) at the end of his story, to signify the end.

Just one little note: interesting evidence here that "mill" referred to a typewriter in general back then, not just an all-caps telegrapher's machine.