Queens of the Keyboard: How England’s Royal Typewriter Team Conquered Europe (But Not the World) 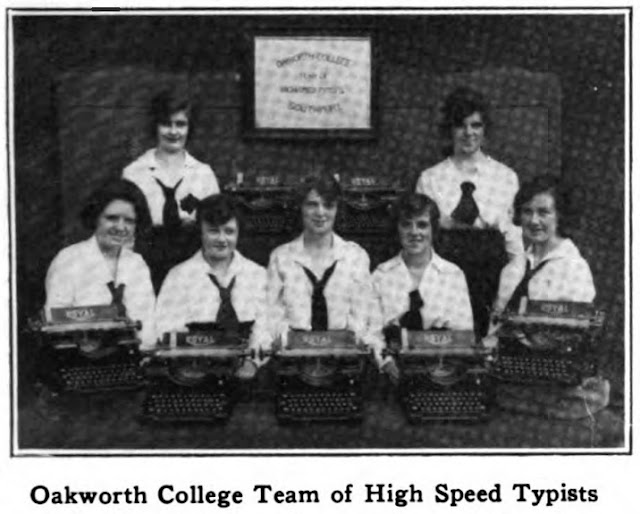 In the immediate aftermath of World War I, with the Underwood 5 continuing to completely dominate the United States standard typewriter market, American manufacturers Royal and L.C. Smith started to look elsewhere for increased sales. And the best possible place to look offshore was directly across the Atlantic, in Britain, where home-grown models had failed miserably to compete against American imports. Of course, the Underwood 5 was selling well in Britain, too, but rival US companies still saw opportunities to compete for business there. Leaders in the British typewriter industry were acutely aware of this situation, with both the Richardson and Rimington families planning to introduce conventional frontstroke, visible writers such as the Barlock No 16 in Nottingham (1921) and the British and British Empire No 12s (1923-24 adaptations of the Blick-Bar) in the old Salter factory in West Bromwich. As we have seen in a previous post, another vain attempt was being made in the period between 1919-22, with the Conqueror in Leeds. But the first British typewriter to emerge as truly comparable with the best American makes was the Imperial 50 from Leicester, and that didn’t reach the market until 1927. 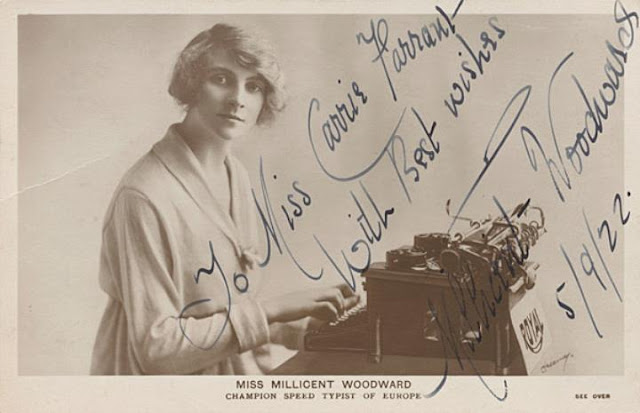 In the meantime, Royal and L.C. Smith, recognising possible openings in Britain, were at the same time fully aware that a vital part of Underwood’s successful marketing campaign stemmed from their New York-based team of highly-trained, highly-professional speed typists. In the post-war era, this team was led by George Hossfeld and Albert Tangora, who saw off all challengers to Underwood in the world speed typing championships (that is, until Tangora switched camps to Royal in 1935). To Europeans, however, a “world” championship in which only American typists, and American typewriters, competed, was a bit like calling an American baseball playoff championship the “World Series”. Thus in 1921, at Belle Vue, Manchester, on June 11, in Paris on July 24 and at Holborn, London, on September 15, “international matches” took place in speed, accuracy and carbon work events. The challenging contestant put up the stake, ranging from £50 to £100. The following year, on November 12, 1922, the first properly organised European championship was held at the Paris Expo Porte de Versailles, but under quite different rules than those which applied in the US (one hour’s typing for professionals). In the early days of the European contests, speed events were mostly contested from five to 30 minutes, and usually only the number of keystrokes were published - making the scores look all the more impressive, but far from comparable with US figures. In the US keystrokes were divided by five to get a word count. Using this calculation, in Paris in 1921, Millicent Woodward typed at 136 words a minute over five minutes, yet in Manchester only at 61 words a minute over an hour. 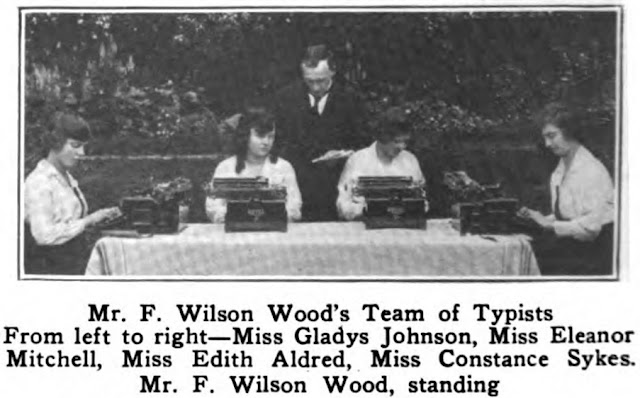 Royal saw all this coming, and in 1921 established an all-female English speed typing team of its own, based at Oakworth College at Hesketh Park, Southport, Lancashire (“secretarial training for ladies, day and boarding”). The “coach” was Frank Wilson-Wood (1887-1953), who had been an adjudicator in Manchester in 1921 and who had promptly recruited Woodward for his team, even though she was 27 at the time. Woodward and another of the Oakworth team went into a countback to decide the first true European title, for 1000 francs in Paris in 1922, and both went on to be labelled the “Queens of the Keyboard” by British newspapers. The inaugural winner (of a cup which rivalled in size and splendour the US trophy) was Woodward, born in Northwich, Cheshire, on December 4, 1893. Woodward would become Britain’s first fully professional speed typist. She had already travelled to the US to compete in the world championships, finishing ninth behind Hossfeld in 1921. Woodward was one place behind her first main English rival, Robert George Curtis (1889-1936), who used a Woodstock before switching to an Underwood three-bank portable in 1922. In 1920 Curtis claimed to have set a new world record in London at 133 words a minute, but it was only over 30 minutes and well short of what Margaret Owen and Hossfeld had previously typed in an hour. Curtis continued to make similar claims up until 1925. 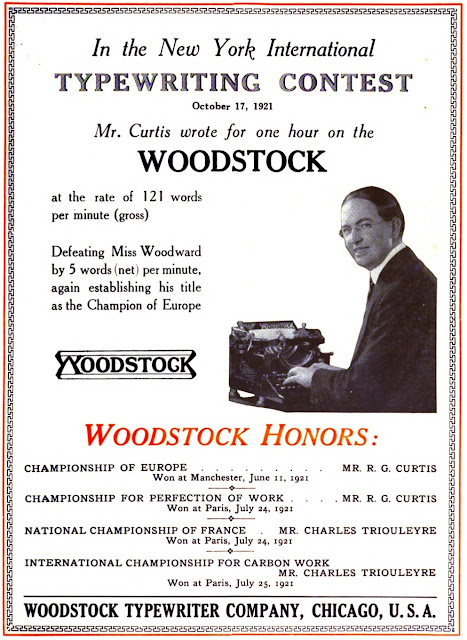 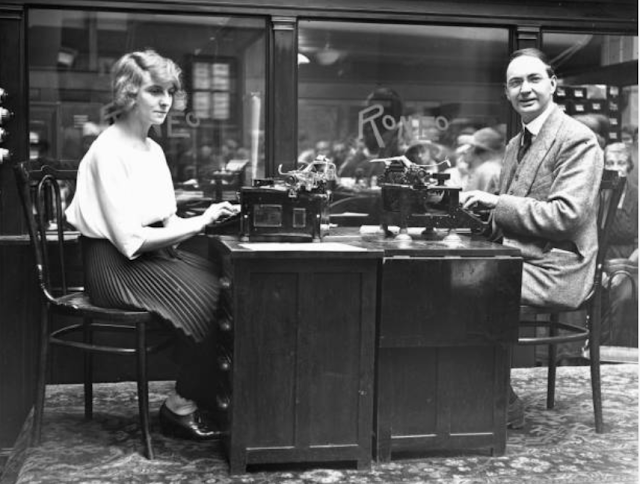 Woodward and Curtis face off in London in 1921. 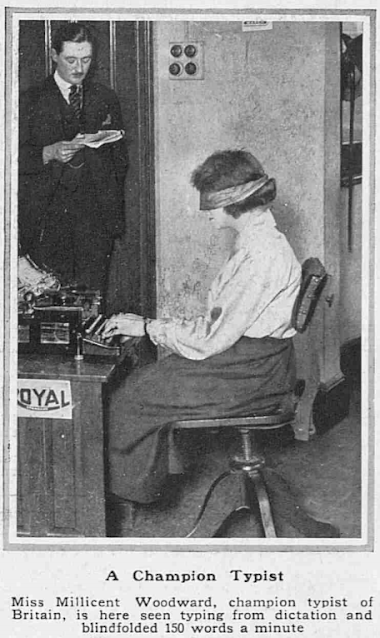 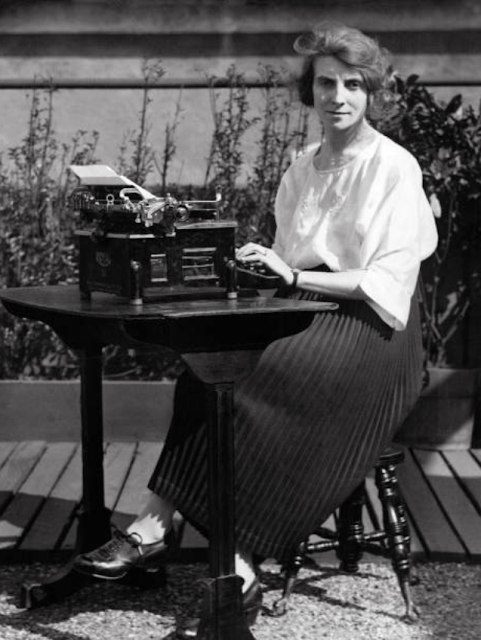 Millicent Woodward at her Royal. 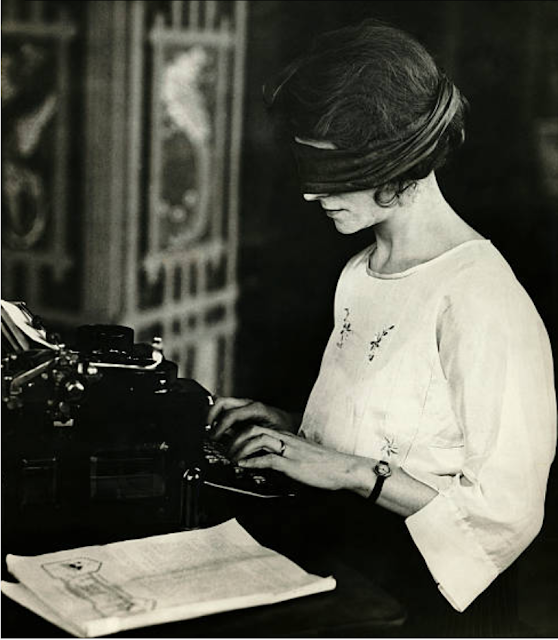 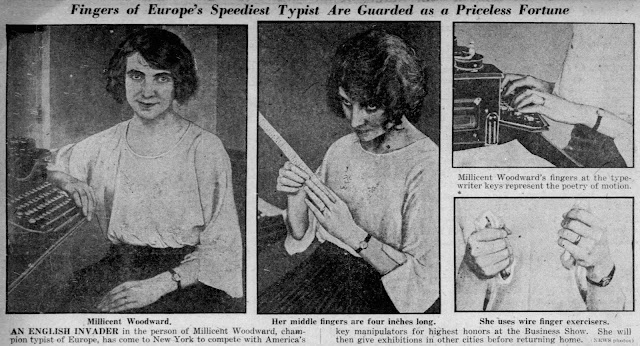 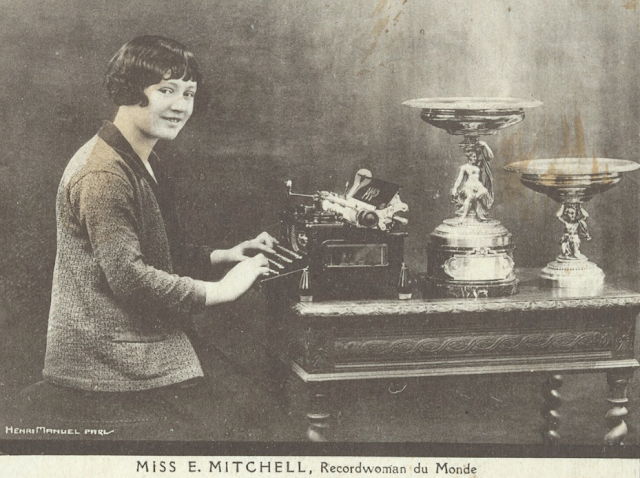 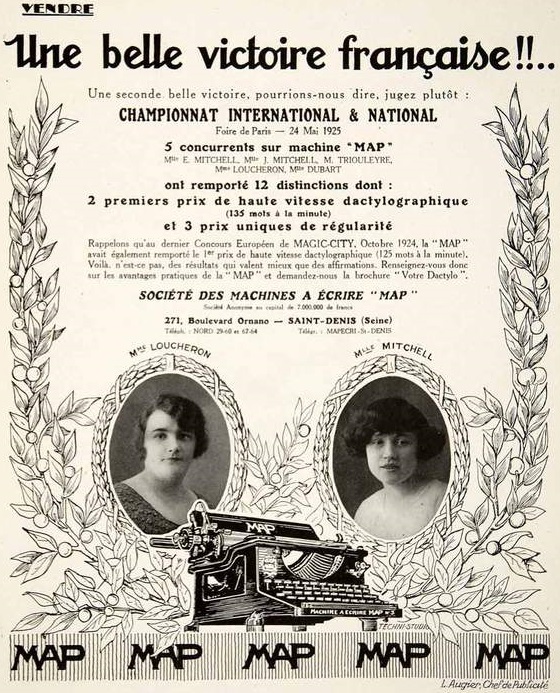 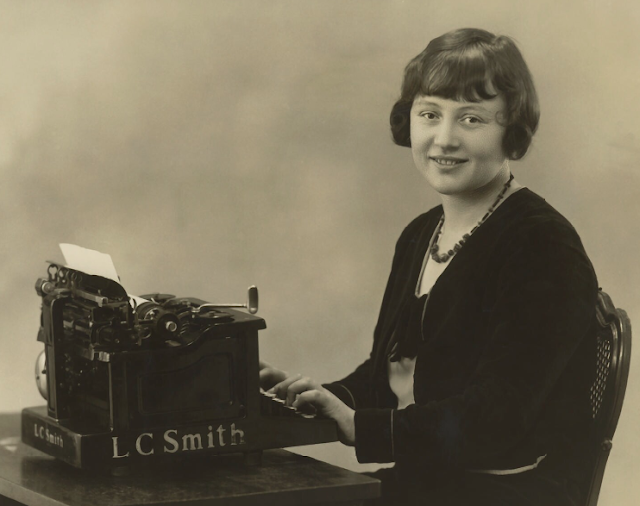 Mitchell then switched to L.C. Smith. 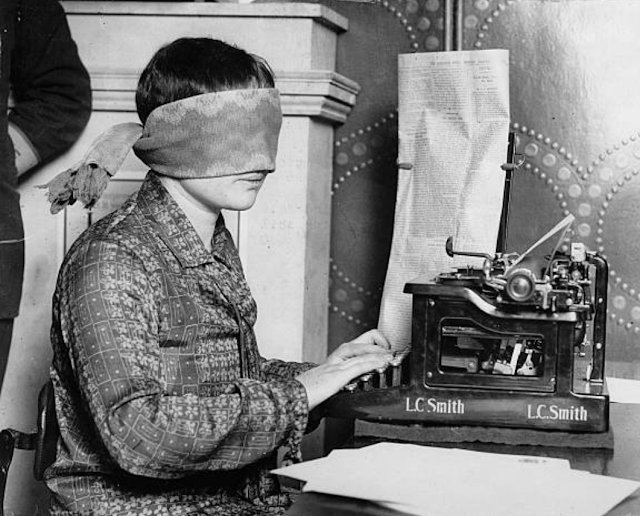 By the mid-1920s the 4ft 6in tall Eleanor Mitchell, from a family of sideshow people, had grabbed the limelight from both Woodward and Curtis. At the age of 16 she was second to Woodward on a countback in Paris in 1922 and went on to win four straight European championships, from 1926-29. Mitchell, born at Chorlton-cum-Hardy in Manchester on January 10, 1906, didn’t remain loyal to Royal, and later used the French-made MAP and finally gave her allegiance to L.C. Smith. She was using an L.C. Smith when she made a guest appearance at the Burnley Express Typewriting Championship in 1930. Woodward (as Mrs Barlow) died at Sale, Cheshire, on New Year's Day 1962, and Mitchell passed away on November 7, 1984. 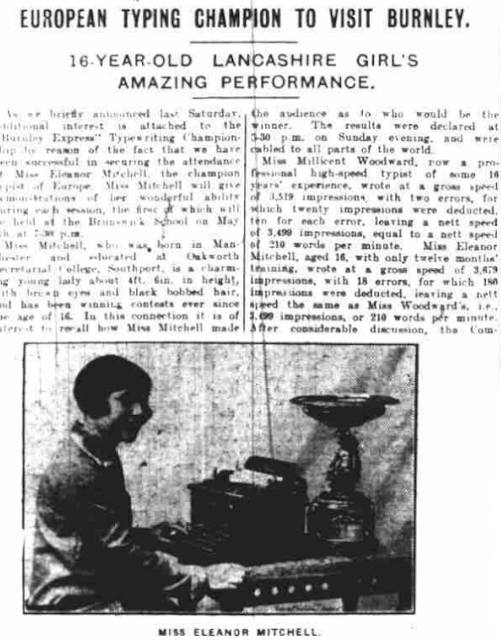 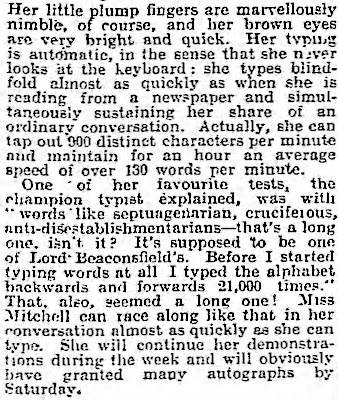 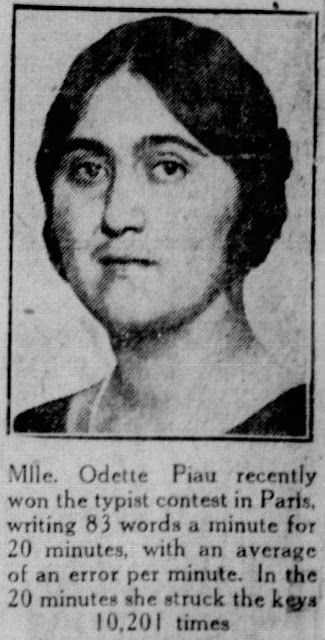 Mitchell was overtaken as European champion by Odette Piau (born Angers, France, October 6, 1903), who worked for the League of Nations. Piau also used both a MAP and an L.C. Smith. Footage of the French championships and of Piau typing can be seen at 4min 45sec here:

Even though it was a European title Piau won,
this ad ran in dozens of newspapers across the United States.
A much later European champion was Lore Alt, born on November 29, 1925, in the west of Stuttgart. Frau Alt used an Adler to win the title, and was rewarded by Adler’s then owner, Max Grundig, with a TV set and a tape recorder (for which products he was more known). Alt entered her first typing contest in 1950 in Schwäbisch Gmünd, where she arrived with the typewriter in a fruit box. Alt then won the Baden-Württemberg and German championships, and a world title in Monaco in 1955. Two years later she won the title again, in Milan, then in 1959 in Vienna. As far as I know she is still alive, and can be seen interviewed here. 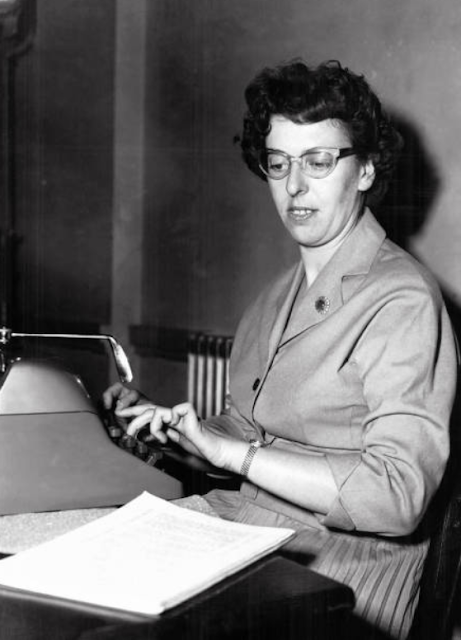 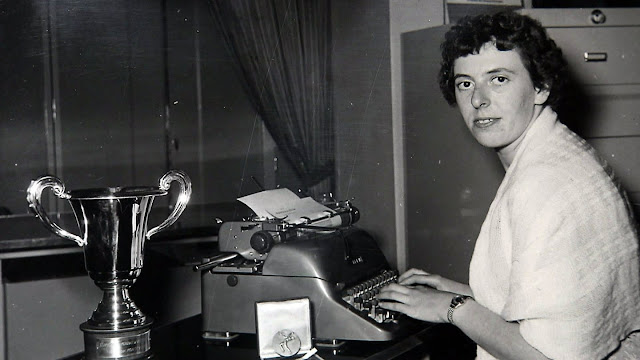 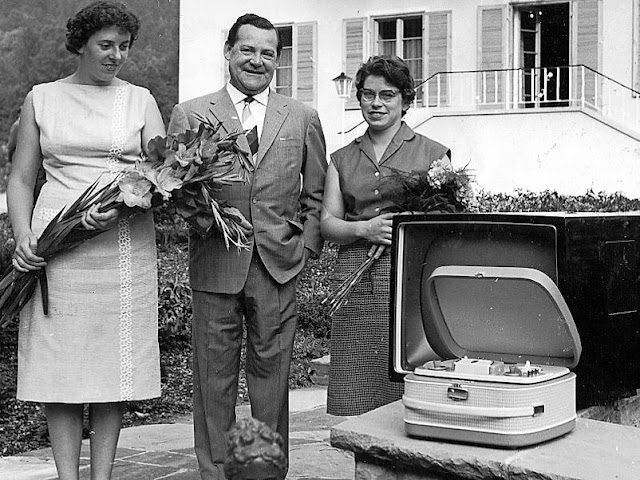 Lore Alt with then Adler owner Max Grundig and her extra prizes. 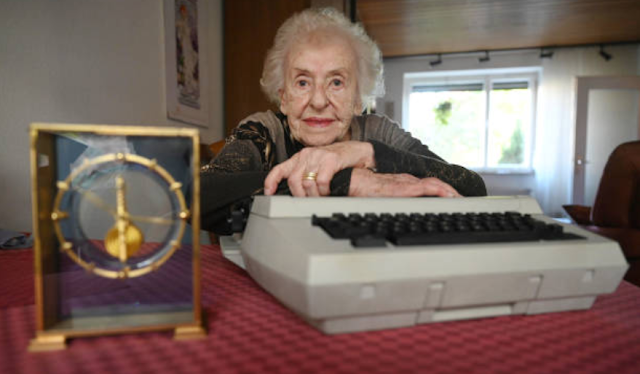 Frau Alt photographed last November with the clock she won in Monaco in 1955.
Posted by Robert Messenger at 16:59

This years posts have been very interesting. I never knew about MAP typewriters and I always find the early speed typists stories amazing as I plow along at about 30 WPM.

Very interesting. My in-laws ran Oakworth College until 1957, when they moved to Canada.
We have several tests typed by Eleanor Mitchell on LC Smith & Corona Typewriters Ltd letterhead and signed by Eleanor.

Delighted with the 'Queens of the Keyboard' article as this refers to my Great Aunt Millicent Woodward whom I have recently been reaching for our Family Tree. The information you have provided & the detail in which it has been presented has made me (us) very proud of her achievements. Whilst also leading me to further the research with information from the US. Thanks.