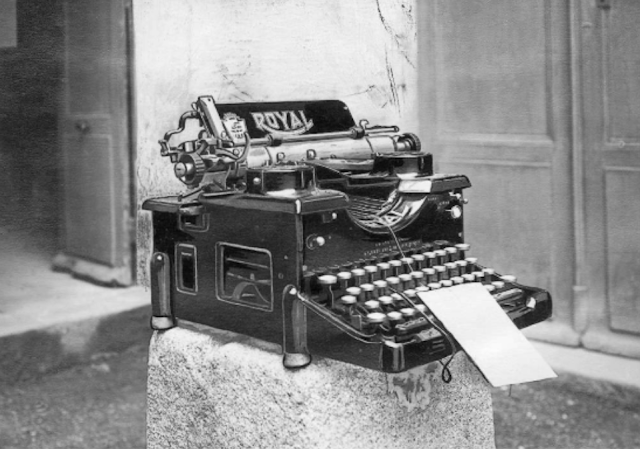 A 1919 Royal No 10 typewriter, serial number 434080, provided the most damning evidence in one of France’s most infamous criminal cases – one which resulted in 1924 in Breton sawmiller Joseph Marie Dit 'Guillaume' Seznec being sentenced to hard labour in perpetuity on Île Royale in the Cayenne penal colony in French Guiana, for the alleged murder of a shady timber merchant and Finistère conseiller général, Pierre-Marie Quéméneur. Seznec proclaimed his innocence until the day he died, in Paris, aged 75, in 1954, the year after the Devil’s Island colony was closed down. It seems highly likely that the Royal typewriter was “planted” in a chimney in a disused attic in Seznec’s home by a notoriously corrupt French policeman, Pierre Bonny, who had gleefully seized an opportunity to impress his superiors in what turned out to be a botched investigation. 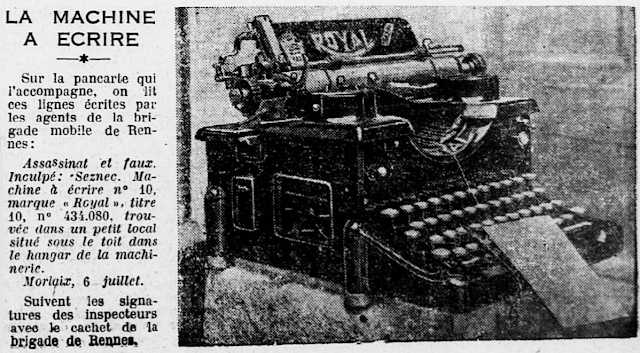 While awaiting trial in September 1924, Seznec wrote to his lawyer Marcel Kahn: “For the typewriter, I never saw it before it was introduced to me … and, admitting that I would have needed a typewriter, I had one on my own provision, which I had lent to M. Duchêne. I would therefore have stopped buying them, especially since I had no intention of trading in them. Needless to say that the place where I was reported to have [hidden] this machine was open to everyone and without any closure and even my employees could perhaps attest that they frequented this attic very often and that they did not ever see a typewriter [there]. Surely then this machine, if at least it was found in this place, was brought after my arrest, because before it was not there, it is still a stroke of revenge.” 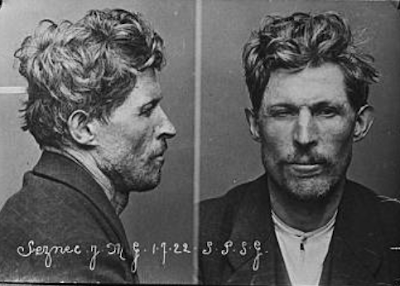 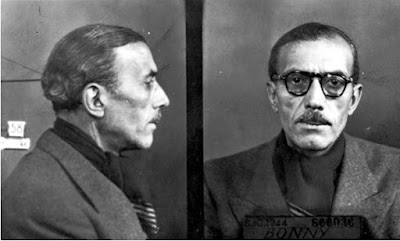 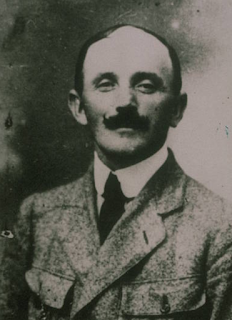 Pierre-Marie Quéméneur
Prosecutors presented unsubstantiated evidence that Seznec had bought the Royal second-hand (though it was only four years old) on June 13, 1923, in Le Havre, 255 miles north of Seznec’s home town of Morlaix, but the court also heard that Seznec had lent his car to a young Breton farmer for three days from June 12. 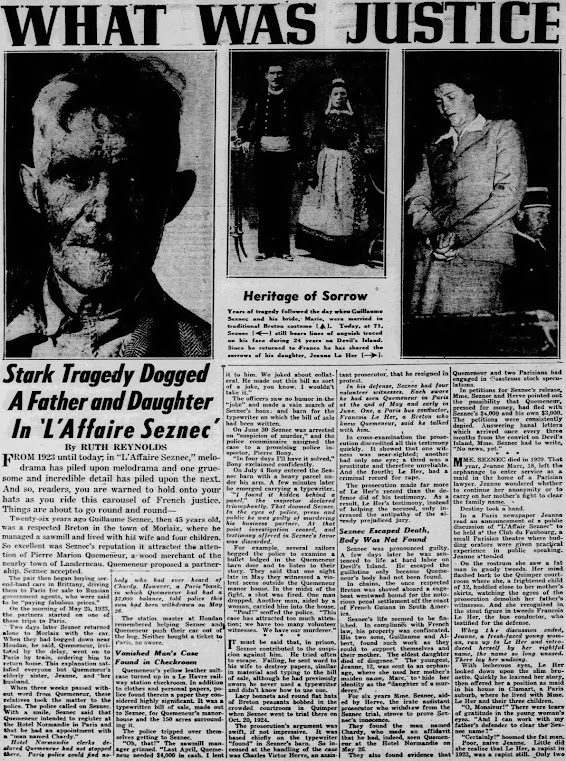 Quéméneur had disappeared on May 25, 18 days earlier. His body was never found. Letters produced as evidence showed Seznec was not in Le Havre on June 13, but instead in Brest and Saint-Brieuc. Seznec maintained he had never been to Le Havre, and there was a statement from Brest typewriter agent Joseph Auguste Batude that he had gone to see Seznec in Morlaix on May 30. Batude claimed Seznec had asked him, “if it would be possible to change the American keyboard of a machine for a French keyboard”. Batude testified that he replied, “the operation would be expensive and difficult”. One witness said he saw Seznec boarding a train in Paris on June 13, carrying the typewriter under his arm. “How do you know it was a typewriter?” asked Kahn. “The police magistrate told me,” came the reply, sending the courtroom into uproar. Kahn responded by saying, “The defence might not be buying all the witnesses,” a suggestion the prosecution was. 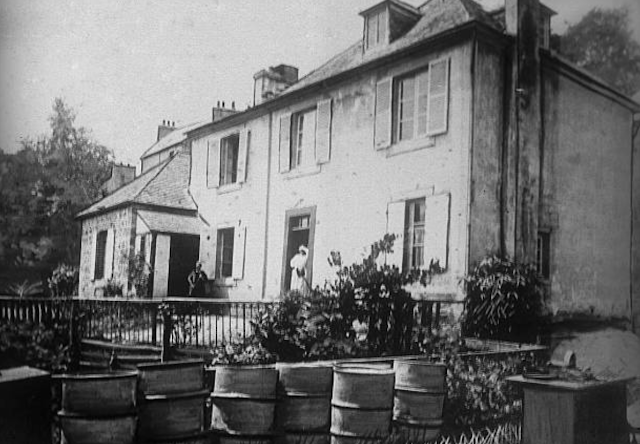 Seznec's home in Morlaix, where the Royal typewriter was found.
There have been 14 subsequent reviews of the Seznec case, all of which have added considerable substance to the suspicion the case against Seznec was manufactured. In 1948 Yvonne Chapelain de la Villeguérin, widow of Colonel Moreau-Lalande, Bonny's superior during World War I, stated that Bonny told her late husband in 1936 that he “found himself obliged to deposit the typewriter … where it was found [by gendarmes].” Of course, the type in a document supposedly signed by Quéméneur and found after his disappearance matched that of the “planted” typewriter*. Henriette Sallé, mistress of Georges de Hainault, one of the witnesses to the alleged purchase of the typewriter by Seznec, said in 1953 that de Hainault confessed to her that he had given false testimony under pressure from Bonny. Louise Héranval, another witness to the purchase of the typewriter by Seznec in 1923, retracted her testimony in 1993. (*The document related to the sale by Quéméneur of the mansion Traon-ar-nez at Plourivo in the Côtes-d'Armor to Seznec at a very low price.) 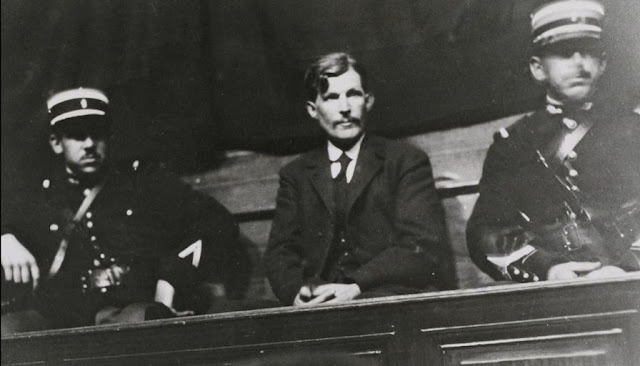 Seznec on trial at Quimper, capital of the Finistère department of Brittany.
Bonny (1895-1944) was jailed in 1935 on corruption charges and later became known as a traitor and unscrupulous Gestapo collaborator, the executor of the lower works of the Vichy regime. He was executed by firing squad on December 26, 1944. Seznec's post-war defence, based on later testimonies, showed Bonny had orchestrated the conspiracy against Seznec and was the author of false witness statements presented at Seznec's trial. 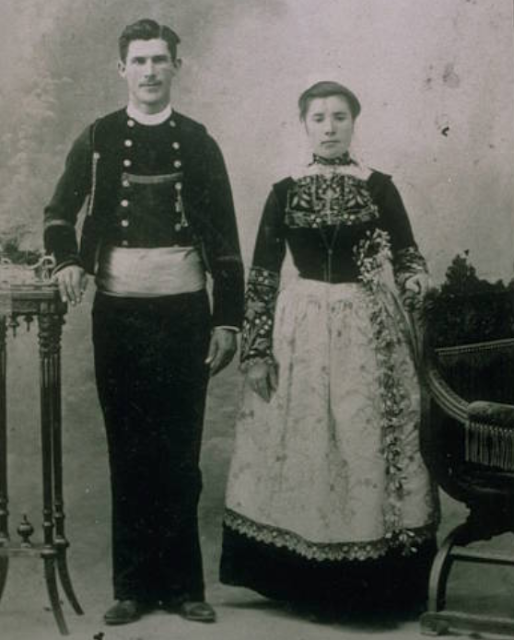 Seznec and his wife Marie Jeanne Marc on their wedding day on July 18, 1906.
Guillaume Seznec, born in Plomodiern in Finistère on May 1, 1878, had in 1923 entered into an arrangement with Quéméneur to raise funds for the purchase of seven-seater 60hp Cadillacs left behind in France by American forces after World War I. In 1922 a Breton newspaper ran an advert inserted by a Parisian businessman seeking the vehicles. The plan was to sell the cars to the Soviet Union, which during the Russian Revolution was urgently placing orders in the West for items such as cars (and typewriters). Quéméneur disappeared during a trip from Rennes, the capital city of Brittany, to Paris with Seznec, which started on the morning of May 24, 1923 in a Cadillac owned by a man called Lesneven. Seznec returned to Morlaix on May 28, but Quéméneur was never seen again. Even in the absence of a body, an eight-day trial was held at Quimper, capital of the Finistère department of Brittany, and Seznec was found guilty of the murder of Quéméneur on November 4, 1924. With remission on a pardon from General Charles de Gaulle for good behavior, Seznec returned to Paris on July 1, 1947. In 1953 he was reversed into by a van that then drove off and Seznec died of his injuries on February 13, 1954. Fourteen attempts to clear his name since have all failed. 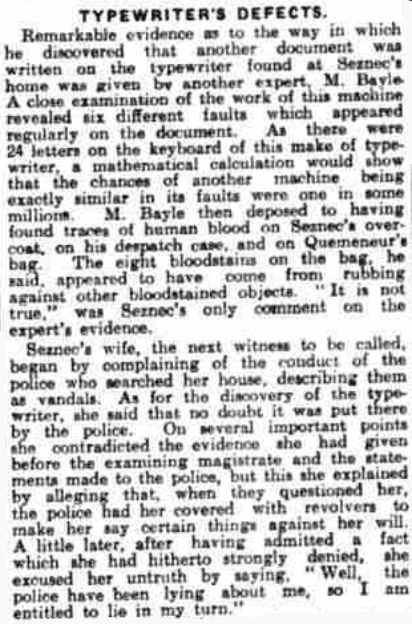 In December 2018, a 90-year-old Norman woman claimed that her father, Georges Morand, secretly buried a corpse in the village of Saint-Lubin-de-la-Haye at the request of one of his friends, Raymond Lainé. The latter was trying to hide the body of someone he killed in Houdan, where Seznec said he had dropped Quéméneur off at a train station on May 25, 1923, before Seznec headed back to Morlaix. This murder mystery continues to tantalize people in France, and in many other parts of the world. 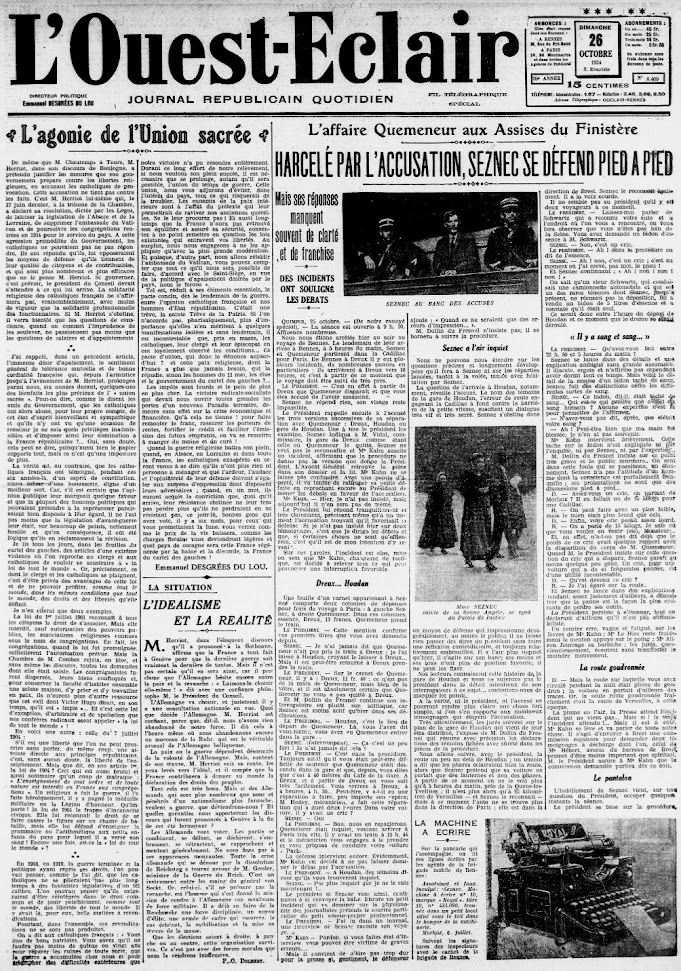 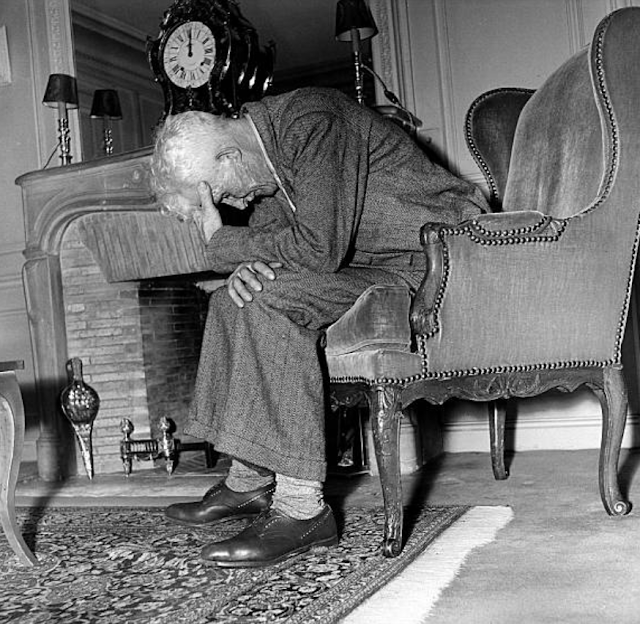 This is an amazing posting. It has sparked my interest in the crime and with Pierre Bonny.
Wonder bit of research.