Definition of word picture: a graphic or vivid description in words. 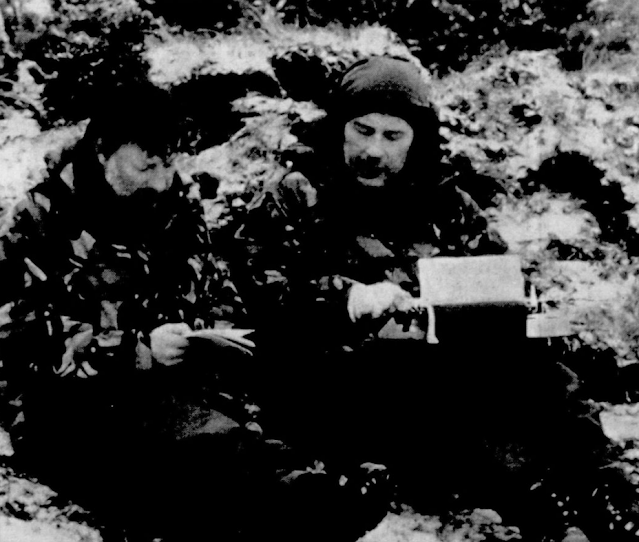 The 10-week Falklands War from April-June 1982 was probably the last inter-continental war covered by correspondents using manual portable typewriters. Above right is A.J. McIlroy of the London Daily Telegraph, using an Olivetti Lettera 32 to write his description of the decisive Battle of Mount Tumbledown on the night of June 13-14. Armed with just a typewriter, McIlroy was able to reach the front line and file the only full report of the battle. Such a feat would be virtually impossible with today’s technology. Below, Max Hastings, of the London Evening Standard, also armed with an Olivetti Lettera 32, was the first journalist to enter Port Stanley during the war. On the morning of June 14, Hastings trudged past abandoned Argentine positions and sat down to type his latest despatch on his Olivetti. He then hitched a lift on a tank to the lip of the ridge, and looked down on to the road leading to Stanley. While paratroopers rested outside the town, Hastings walked into Stanley, clutching a white handkerchief and his typewriter. He passed lines of Argentine soldiers and found the Falklands’ lone hotel, the Upland Goose. He plonked down his Olivetti and was greeted with cheering from the 20 people inside the bar. “Would you like a drink?” asked the landlord. 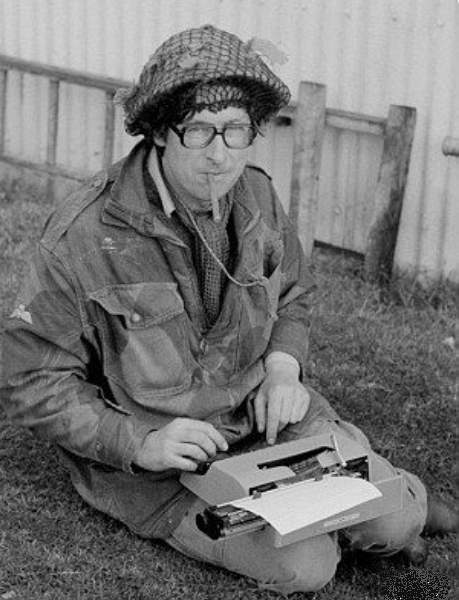 Few of those of us committed to the Typewriter Revolution might consider that their rebellion against the information regime, their escape from the data stream and their choosing of the physical over the digital has any connection with events in Gaza City in the past two weeks. Yet the May 15 Israeli air strike on the al-Jalaa Tower, which housed news organisations Al Jazeera and Associated Press, once more underlined the complete, if vulnerable, dependence of such groups on the modern news media paradigm. Just as Richard Polt pointed out on his May 9 blog post about a cyberattack on a pipeline in the US showing typewriters remain necessary equipment for the 21st Century, so too did the scramble to get equipment out of the al-Jalaa Tower raise questions, at least in my mind, about digital writing tools. I was, for example, stunned to hear AP’s president and chief executive officer Gary Pruitt, sticking plaster on nose, say, “The world will know less about what is happening in Gaza because of what happened today.” This was an alarming concession, one that would have left many old form journalists absolutely gobsmacked.

Almost without exception, news coverage of the Gaza air strike stressed the need for Al Jazeera and AP to get cameras out of the tower after an Israeli advance warning. Not people, not writing machines, but cameras. Bodies and brains apparently meant little by comparison, cameras were everything. Today, it seems, news is not considered news without vision. Mere words just don’t cut it anymore. The more the media depends on moving pictures, the more that great art of creating detailed word pictures is lost. Am I alone in being unable to make head nor tail of most news stories online these days? Reporters no longer seem capable of writing stories that tell the reader everything he or she needs (and wants) to know. Vital details are invariably lost in the rush to get unchecked articles online. But, hey, there’s always a video or a picture, not that they necessarily actually help much.

So, in effect, when AP’s Gary Pruitt was saying in Gaza, “The world will know less”, what he really meant was “The world will see less.” Seeing is not necessarily knowing. Knowing does not rely on pictures. I can’t image the late 19th Century equivalent of a Pruitt telling Lionel James, “We have to have pictures” when James, typing on a Blickensderfer 5, rode camelback into the Sudan with Kitchener. Nor when James, on a warship in the Yellow Sea, filed blow-by-blow word pictures back to London during the Russo-Japanese War in 1904. Journalists of James’s calibre needed no photos to enhance their stories. Someone back in London drew dramatic images based on what James wrote, so evocative were his articles.

Some of James’s successors were just as adept in so accurately setting scenes in print. A.J. Liebling for The New Yorker described D-Day on his Royal portable in such a way that, anyone who had read his articles could watch Saving Private Ryan and say, “No need for computerised special effects, for cinematic technology and digital bullet hits and 40 barrels of fake blood, no need for 25 days of filming, a thousand extras and $11 million to capture it. I’ve been there. I read Liebling, for the cover price of The New Yorker.” And before Liebling, of course, there was the Pennsylvania-born British knight, Sir Percival Phillips, capable of scooping the world with a manual portable Corona in isolated Abyssinia. That took real skill. To suggest someone like Phillips could only cover a warzone with the aid of photos is simply laughable.

In 2003 I stood on the rim of an “elephant’s cemetery” in Johannesburg, overcome by a sense of déjà vu, having been taken there by the words French sports writer Denis Lalanne had typewritten on an Olivetti Lettera 22, on that very spot 45 years earlier. It was uncanny. Not photographs, no video I had seen of the scene had captured it the way Lalanne had. Photographs and video couldn’t, because they were one-dimensional. Lalanne made his readers feel the thrill and the tension of being there, looking down on that huge arena, listening to the sound of ghostly silence, breathtaken by not just the vastness of the place but its history. Now that was a picture, a word picture par excellence. The typewriters of Lalanne, Liebling and James were nothing more or less than time machines. They took you places through time and distance, to let you see, and know.

No, the world need not know less about the conflict in Gaza without cameras, or without modern communications. It would have known an awful lot less without A.J. McIlroy, Max Hastings, Lionel James, A.J. Liebling and Percival Phillips and their typewriters. Good journalists with typewriters never failed to get their stories out, one way or another. They always clearly understood, and mastered, their dual prime objectives: to get the story and to get it out to the world. Would damaged television cameras have impaired their ability to do this? Not one bit. The absence of any type of camera only heightened their sense of the challenge they faced, their obligation to accurately record history, and eked from them the very highest levels of their abilities as wordsmiths.

Just today Al Jazeera reported accusations from Palestinian non-governmental organisation 7almeh that social media companies had closely cooperated with the Israeli Government to censor pro-Palestinian content after Israeli attacks escalated. “There was a massive crackdown by Facebook, Instagram and Twitter and other social media companies on posts relating to [peaceful protests in the occupied East Jerusalem neighbourhood of] Sheikh Jarrah,” said Nadim Nashif, director of the Palestinian digital rights group. The ability to control news coverage of a conflict would have been impossible in pre-digital days.

In the past few weeks we have had comments on this blog from Ron Yates, for 20 years a foreign correspondent for The Chicago Tribune, and a professor emeritus of journalism at the University of Illinois and dean of the College of Media. Ron said he had used an Olivetti Lettera 32 all over the world, covering “war and mayhem from Vietnam to Latin America … It never failed me … I took it to some pretty awful places and abused it in all kinds of situations.”

In a post about the Olivetti on his own blog, Ron described taking his typewriter from the jungles of Cambodia to the central highlands of Vietnam, jumping on and off helicopters, bouncing down rutted roads in jeeps and trucks, and exposing the Lettera 32 to 110-degree temperatures and monsoon rains. Like Hastings in the pub in Stanley, Ron’s typewriter was “irrigated more than once with Vietnamese ‘33’ beer”. “Its solid, blue metal shell behaved like armour plating. No matter how much I threw that typewriter around or how often I dropped it, when I unzipped the vinyl case and pulled it out, the platen always held my paper in position, and the keys always worked. In 1975, this was state-of-the-art technology. Tough. Dependable. Cheap. Easy to maintain.”

Ron said he had occasionally used the Olivetti to shield himself “from airborne shrapnel and the other fluttering detritus of war”.  Ron weighed up the pros and cons of typewriters versus laptops, mentioning the need for electricity for the latter. What he overlooked was the vulnerability of digital communications. Manipulating Public Telephone and Telegraph telex copy in transmission to Chicago was not the simple matter it is with digital matter today. And then, of course, there’s the question of the word picture. Oh, yes, in the digital age, that’s taken care of by photographs and video. Without those “the world will know less”. Or will it?

Posted by Robert Messenger at 09:41

Great blog today. Amazed at the number of Olivetti's - I imagine the metal construction and size gave it advantages over it's plastic competitors.

You make a number of profound points here.

We should remember that now a picture, or even a video, is far from a reliable mirror of reality, thanks to the image manipulation techniques that get more sophisticated every day.

Quite possibly the best article you have written!

what got me, as i listened to an interview with the AP prez last week, is they were tipped off by the israeli government. same for al jazeera and whomever else was in the building.

therefore the line about the building being a hidey hole for hamas/rebels is baloney. 'cause if it was true, and the rebels saw all the press evacuating, wouldn't that tip them off, maybe just a little?

my bet is rebel forces are far more mobile than an entrenched press corps which had been in the building for many years.

this was about was retribution against reporting the truth of israeli oppression. nothing less. israel didn't want to kill the press (maybe they did but that'd be a big problem), they only wanted to send a message by making it harder for the truth to be shown and spoken.

maybe i'm just an old mad poet shaking my fist at everything. believing nothing.