He Ain’t Funky, He Ain’t Atomic, He (Definitely) Ain’t Heavy, He’s My Brother 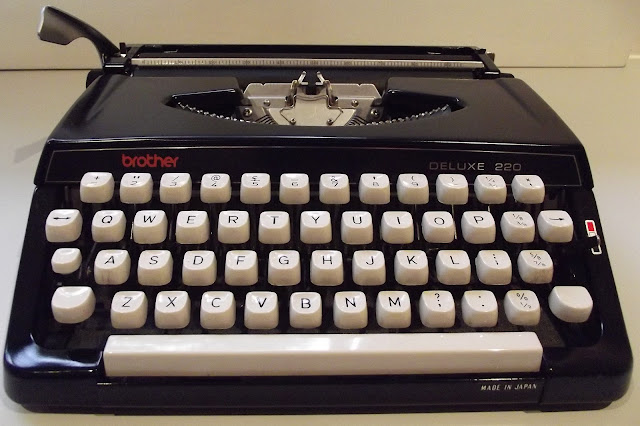 One 60th the price of a “funky, atomic”!
100 times the value
Plus a real rugger colour!
I suspect my irregular instalments of “Australian eBay Typewriter Watch” are having some impact. After my last lash at “funky, atomic” typewriters, the bidding brakes went down hard on one item so described and came off another which was just pure and simple good value.
After that post, some good sense started to prevail in the case of the “atomic VINTAGE retro INDUSTRIAL all metal BROTHER TYPEWRITER” which was “strong in colour” (that is, it had no colour at all). This very common or garden Brother 215, however, did eventually sell for $105.50 after a further five bids, making 38 bids all up. 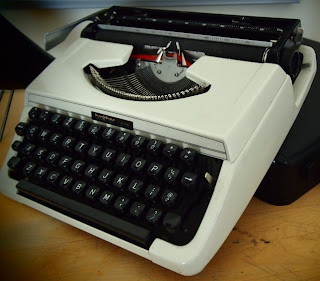 To make my point, at least to my own satisfaction, I decided to bid on a much more interesting Brother, a DeLuxe 220, which did have colour – indeed, all colours of the rainbow, and then some: it is all-black. This was listed as the same time as the colourless funky, atomic Brother 215. 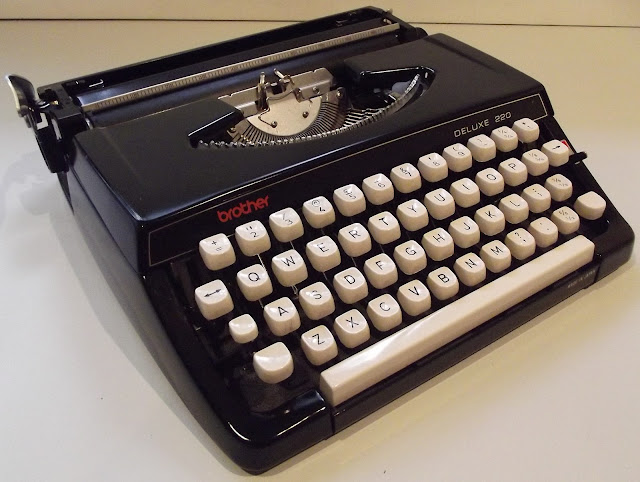 I’d been meaning to celebrate my homeland’s win in the Rugby World Cup late last year with a modern portable typewriter, and this is it* 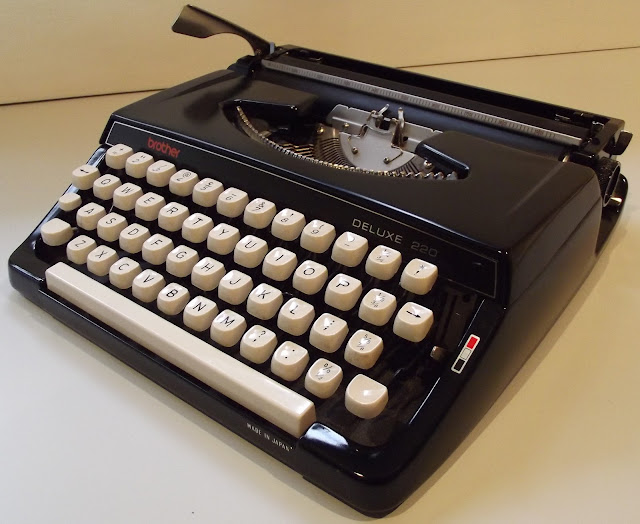 All-black Brothers are far less common in this country. I know Adwoa spotted one in a Geneva market in her December 2010 round-up, and Vikram has an interesting one in red-and-black. Richard Polt also has one as a Remington 333. Both the black Remington and the Brother are available on Etsy. 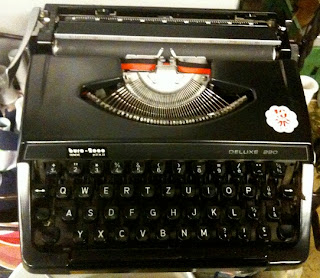 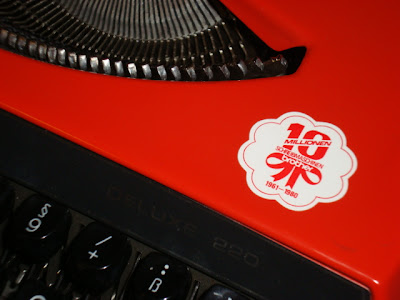 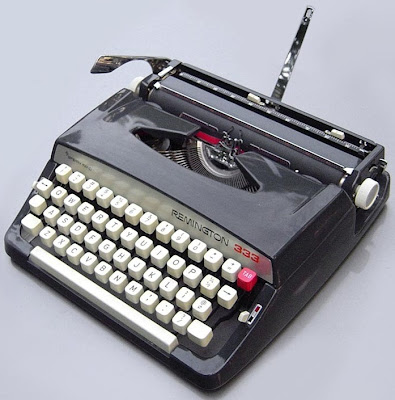 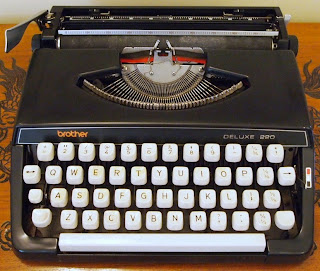 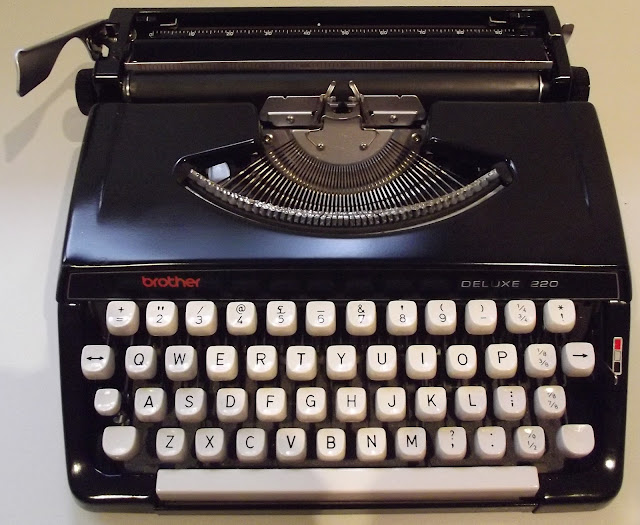 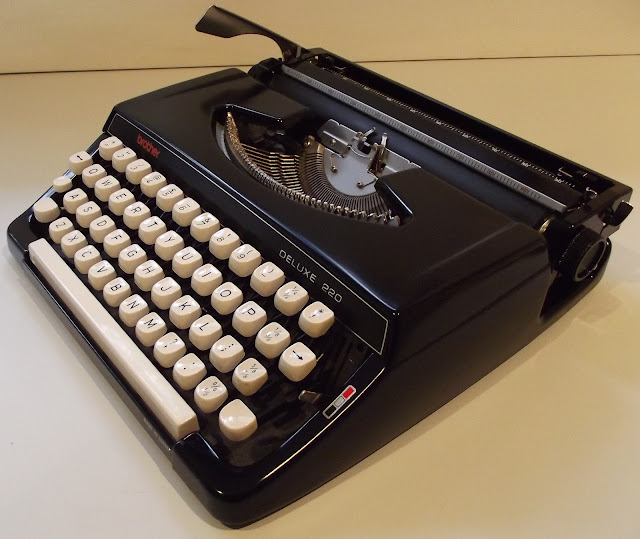 So, yes, now that I’ve rubbed an oily rang over my Brother (which it hardly needed, as it looks next-to-new), I am going to rub it in elsewhere: C’mon, Australians, try to be a bit more selective when buying typewriters, and try not to be so stupid as to be taken in by words like “funky" and "atomic”. They mean absolutely funky nothing … 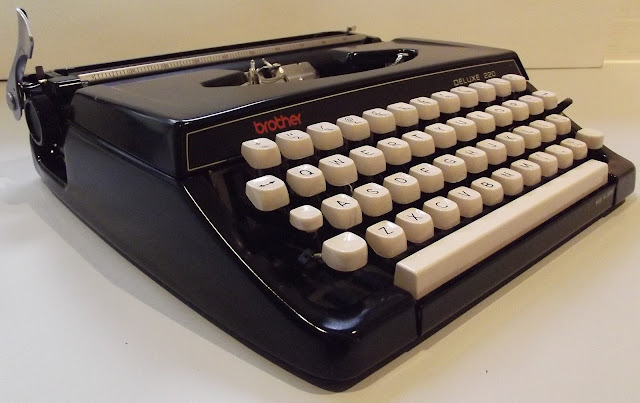 “Old Chic Industrial” worked for this Royal 10 with a “complete set of keys" (! What else would it have?), which sold for a surprisingly high $451. 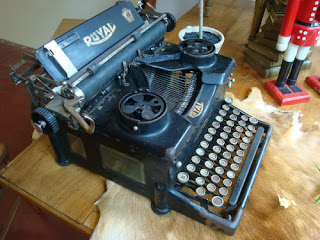 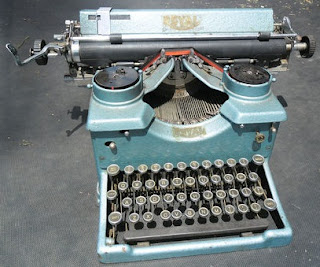 Some Australians did prove perceptive, and this very nice Remington portable sold for $362. 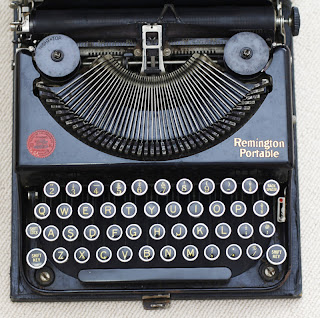 And Derrick Brown’s latest offering, a Corona, sold for $343. 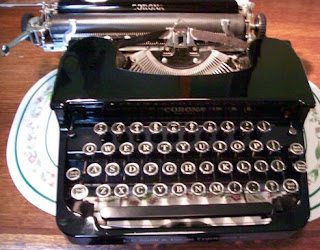 Derrick is now offering a Royal at $175. 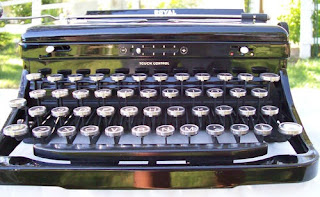 It will be interesting to see whether this Remington Model 5 portable sells with a $425 buy-it-now price on it. There are still 25 days to go. 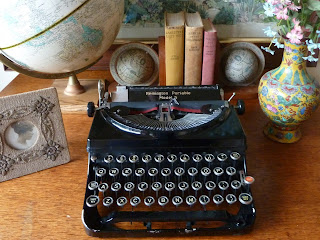 One item which did not sell (after no fewer than seven listings!) was the Imperial Model T – the price dropped by $80 to under $20, but the seller insisted on a same-day sale, plus pick-up, with no image of the machine. Hardly surprising. 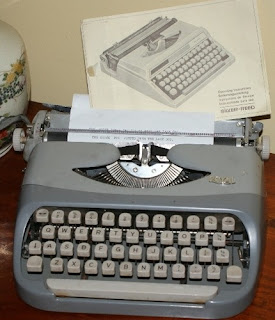 It might also help this none-too-perceptive seller achieve a buy-it-now price of $65 over the next 25 days ("original booklet" or not) if he or she lists their item as what it is, a nice Royalite, rather than a very common Silver Reed, which it is not. I’d suggest the manual belongs to another typewriter – it certainly looks like a completely different typewriter!!!
Where, I am happy to say, the brakes did come off the bidding was on an uncommon Olivetti Lettera 41, which eventually sold for $112. 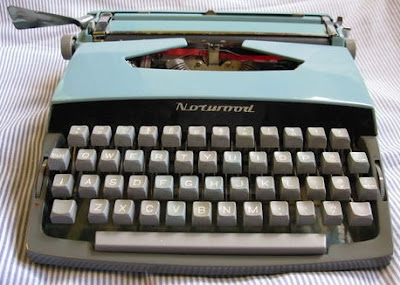 This unusual Norwood-Consul portable sold for $51. It looks like a very nice model, one I hadn’t previously seen. 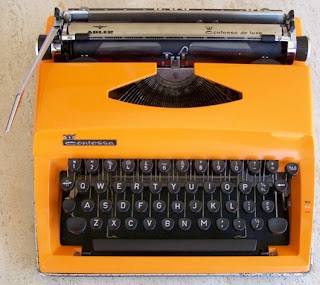 Orange Adler or Triumph Contessas continue to sell for ridiculously high prices, and this one went for $104.50 after no fewer than 61 bids! Embarrassingly, the word about what silly prices Australians are paying for these common and very ordinary typewriters must have spread, because someone in Berlin (yes, in Germany) listed one for $99 (“VINTAGE super rare [I kid you not] TRIUMPH -ORANGINA - typewriter; POP DESIGN .... working [Just as well!]"). The postage of $74 probably put bidders off, because so far there have been no bids with a day to go. 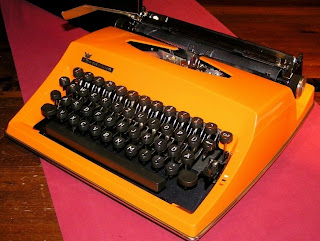 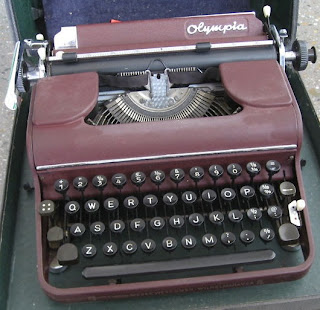 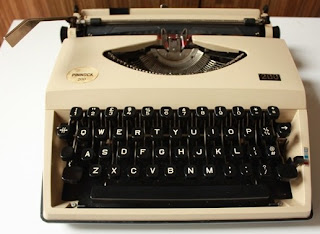 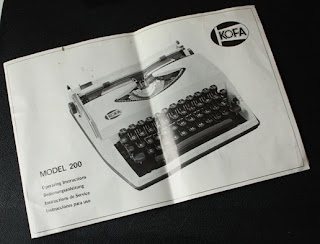 In tribute to my $1.75 Brother, I’d like to paraphrase The Hollies, a 60s British pop group which once rivalled The Beatles (seen below with a typewriter): 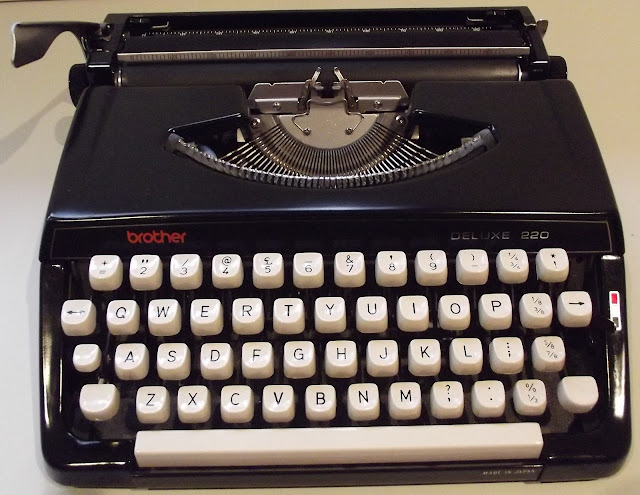 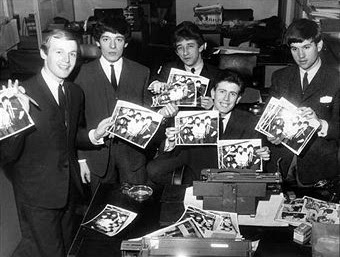 After Graham Nash left them to form [David] Crosby, [Stephen] Stills, Nash (and later [Neil] Young), The Hollies, named in honour of Buddy Holly, had a big hit with He Ain't Heavy, He’s My Brother:

The ribbon is long
With many a winding turn
That leads us to who knows where
Who knows when?
But I'm strong
Strong enough to carry him
He ain't heavy, he's my Brother
So on we go
His welfare is of my concern
No burden is he to bear
We'll get there
For I know
He would not encumber me
He ain't heavy, he's my Brother
If I'm laden at all
I'm laden with sadness
That someone's collection
Is filled with the badness
Of funkiness and Atomization
It's a long, long ribbon
And there is no return key
While we're on the way to there
Why not share?
And the load
Doesn't weigh me down at all
He ain't heavy, he's my Brother
Wikipedia tells us that the first editor of Kiwanis magazine, Roe Fulkerson, published a column in September 1924 carrying the title "He Ain't Heavy, He's My Brother"; variations on the phrase are attested as early as 1884. The phrase is also associated with Father Edward J. Flanagan, the founder of Boys Town. Flanagan came across a line drawing of a young boy carrying his brother in the Christmas 1941 edition of the Louis Allis Messenger. The caption read "He ain't heavy Mister — he's m' brother!" It was created by Van B. Hooper, who later became the editor of Ideals magazine. The drawing was reprinted in the first issue of Ideals in December 1944.
The statement is an (unwitting) use of paraprosdokian, a figure of speech in which the second half of the statement causes the hearer to reinterpret the first part. Often used for comedic effect, this is a rare use of the form as pathos.
*The reason the New Zealand rugby union team was first called the All Blacks was not, surprisingly enough, because of its all-black uniform, on which is emblazoned the silver fern. On the Original All Blacks tour of the Northern Hemisphere in 1905-06, the team started out with a big win over the English county champions. A Fleet Street journalist cabled in his report to his newspaper and wrote that they played like “all backs” (rather than more leaden-footed forwards). But the sub-editor at The Daily Mail thought he meant they were all Maori (native) players, and inserted the “l” in “back”. The name stuck thereafter. Silly, but true ...

But not quite as silly as spending $105 on a Brother typewriter!
Posted by Robert Messenger at 12:31

Always awesome to read your informative posts; and funny to see the horrible prices some will pay for these cheap '80s plastic machines.

Thanks for using my picture! Now I can say my typewriter has "been" to Australia as well! (Made in Japan, sold to me in Germany, back here in the States. :-) )

Very entertaining. You certainly got a great deal on that very handsome Brother!

Thoughts on this post:
Wow, shiny brother.
$451 for the Royal? Incredible!
Nice Remington Portable, but $360...
That Remie 5 is presented nicely!
The mysterious Royal looks like Fernando's Consul...
The Kofa looks like the Tippa.

Entertaining overview of the market down under! Here in Switzerland, much less's going on.

Very interesting and informative post. I have been reading good things about the Brother typewriters lately (I always considered them cheap) so I bought one for $3.00 plus around $10 or $12 shipping and amazingly (like my Nakajima Oly B12) it is a very nice finely balanced typer. You mentioned latest Ebay prices did you note any of the over-inflated Hermes prices in the last 2 to 3 weeks?

All B(l)acks? Really? That's a useful snippet of info to share with my rugby following relatives. I think one of the joys of window shopping on eBay is the entertainment value of descriptions and 'hopeful' prices both sought and paid. I think it is clear that anyone who has ever bought more one than typewriter this way will realise that there's very little correlation between price and quality - especially for less exotic mid-twentieth century machines. I'm pretty certain that most of my collection has come from house clearances and loft clear-outs, often following the death of a previous owner. 99p opening bids are common for that reason - people just want the space but can't bear to throw out complicated-looking ironmongery. What doesn't help is when there's the esteemed mytypewriter.com putting $500 price tags on fairly ordinary machines. We all know it is a different market (and good luck to mytypewriter) but, to research the description, people often cite these prices to make their eBay starting/BIN prices seem reasonable. I don't think there's much you can do except watch with detachment and try not to get carried away when bidding. Meanwhile, I'm in danger of tipping from an all-black collector into a mostly-not-black collector. How did THAT happen?

Ebay does weird things to prices. It's true to say 'It all depends on how much someone is willing to pay for it' when you are asked the question 'how much is my thing worth', but ebay adds that competativeness to it, in an era that has made everything instantly acessable.

In the case of these beautiful machines, you can't just walk into your local department store and buy one, then show your friends how cool it is... getting that instant gratification. The orange contessas are selling so high, because they are something they can show off. Something that is actually hard to get, and not instantly bought in the shops. This is a sign of the lack of 'authenticity' that we have in our community these days, where we're struggling to break out of that push towards uniformity over the last 60 years.

This is why I find these ebay auction posts so facinating. The points of view expressed here really do reflect the absurdity of actions created by such a tiny Australian market place, where people are competing with dollars to buy 'cool'. Throwing money desperately at something to get it.

Seeing that Brother with the sticker on its hood makes me wonder - was there some factory screwup that caused them to need to put those there? Because my Webster XL-747 (Brother-made, obviously) has a completely different sticker (even more useless - advising us that Parents magazine really likes this particular typewriter) in exactly the same place.

Is there a way to know when and where my Brother typewriter is made?

Wikipedia told me that Brother had multiple factories producing typewriters. The inside of the typewriter cover says "Made in Japan", but I'm not entirely sure if it refers to the cover only or to the machine. The back of the typewriter says "brother, Nagoya, Japan", but also no "Made in anywhere" sticker, so it could refer only to the city where the company HQ is.

Your article is great btw, and I'm happy that I found your site :)

Hi FleetCommand, glad you found the Brother post, I was going to alert you to it. Thank you Vikram, Richard, Florian, Bill, Rob, Scott and Duffy. Bill, yes, Hermes Baby prices have gone through the roof in the past year, 2000s not so bad, 3000s steady. Yes, Rob, that story about the ABs is accepted as true (but I have my doubts!). Very thoughtful words, Scott, remains me a Vanity Fair article I read just recently; I will post on this topic. Duffy: That Parents Magazine sticker appears on an awful lot of Brothers, I only took one off a DL 1350 yesterday. I think Brother were very proud of the recommendation. Actually, Brother was the typewriter of choice for school age children through the 70s and 80s.

I have quite a collection of authentic Canterbury All Blacks jerseys (when they were real rugby jumpers). Although I'm loathe to part with one - I can't stand the new jerseys - I might trade one for a typewriter!