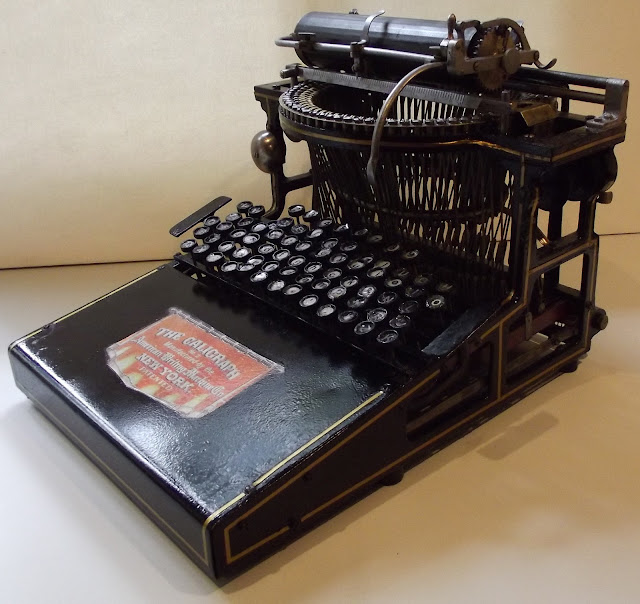 I haven't posted anything in the past few days because I have been spending a bit of time working on restoring the Caligraph I bought some few weeks ago. It's still not working, of course, despite some sound advice (thank you Scott K, especially) on how to fix or replace the snapped mainspring. But at least it now has an almost full keyboard with characters. 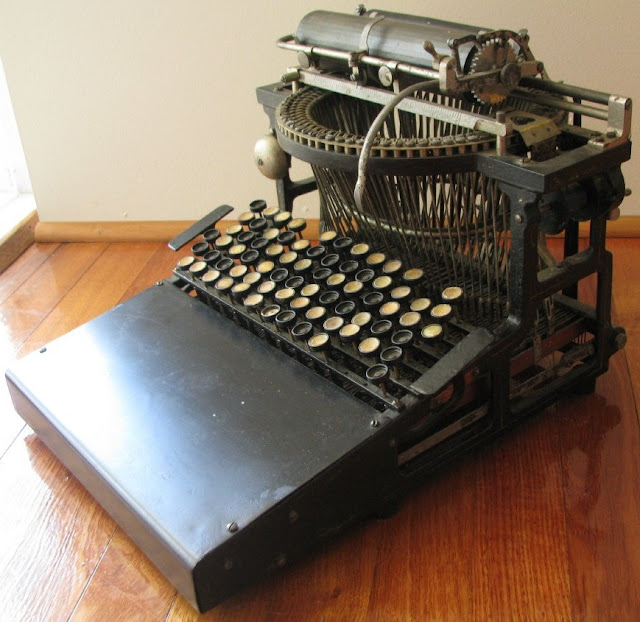 Above is what it looked like when it arrived.
It's main purpose in life now will not to be a working model but to show people what a Caligraph looked like and, of particular interest, the keyboard configuration. 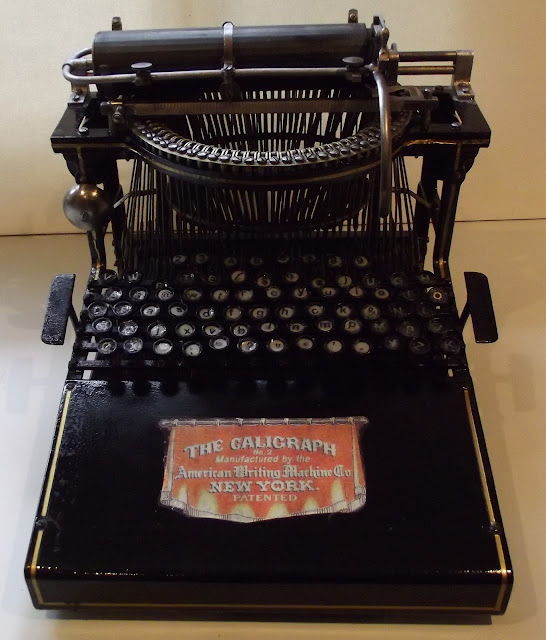 Since the machine was missing five keys when I received it, I had to compromise on this a little. The capitals are still placed on the outer edges of the keyboard, so the general idea remains the same. 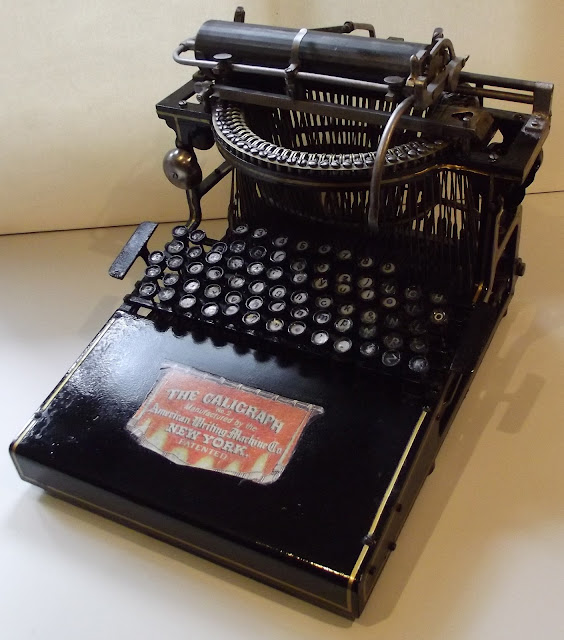 When I posted images of the Caligraph I bought, Adwoa put me to the challenge by wondering aloud how I would go about fixing the keyboard.

The best image of a Caligraph keyboard layout I could find was from a front-on photo of a Caligraph on a "Mr Martin" website (above).
Using the lower case "m" as a guide, I found the closest font for the characters was Arial Rounded MT Bold.

After cleaning out very hard resin which remained in some of the keytops, I printed out the characters, cut them out and placed them in the keytop shells. 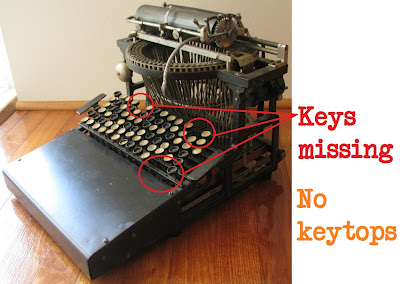 I had earlier tried out two other methods,  filling the keytop shells with coloured Blue Tack and placing the characters on top, and also using silver keytop rings. But the best result was to put the printed characters at the bottom of the shells and fill the shells with a clear glue. 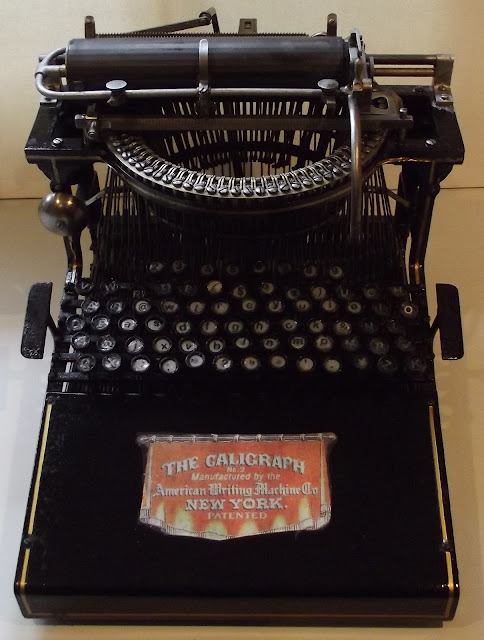 Early on I realised that the keyboard layout I was working from had 12 keys a line, whereas mine had 13! This actually suited me, since, missing five keys, I had replaced two keys on the bottom bank and three gaps in the top bank by having eight keys in a row on the top bank. This meant using some of the capitals from the top bank elsewhere. 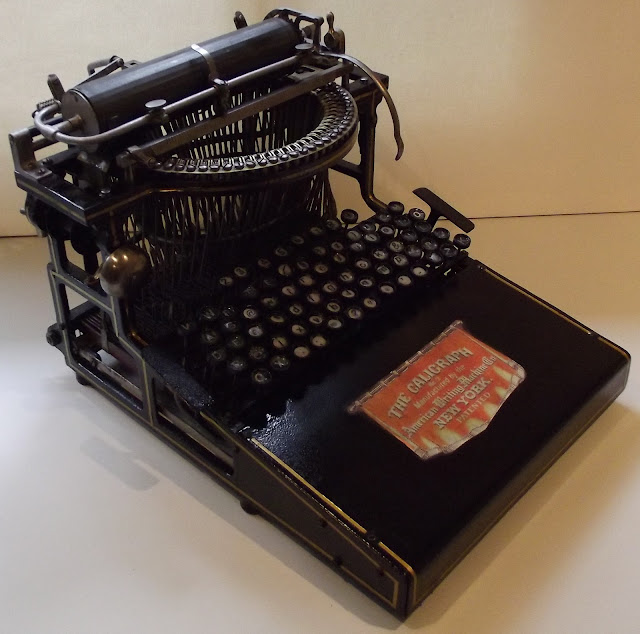 Imagine my surprise when, as I approached the end of the task of placing the characters, I found the keyboard image I was working from had no lower case "n"! I found a spot for this, but then I had one empty keytop left over, so I used an ampersat. OK, I know I've cheated outrageously here, but, as I said, the broad concept of the Caligraph keyboard is still captured, I think. 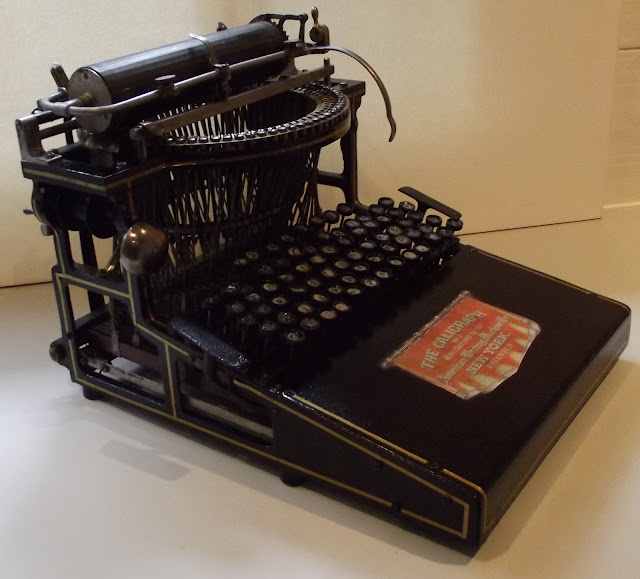 The trim comes from a 3mm pinstripe tape usually used for car trimming. I think it sets off the look nicely. The decal comes from the PDF of a past edition of ETCetera, the clearest image I could find. I printed this, scanned it and then printed it on to a white-backed transfer. If you don't think any of this works, let me know - but as I said, the main purpose is for me to simply show Australians what a Caligraph looked like. 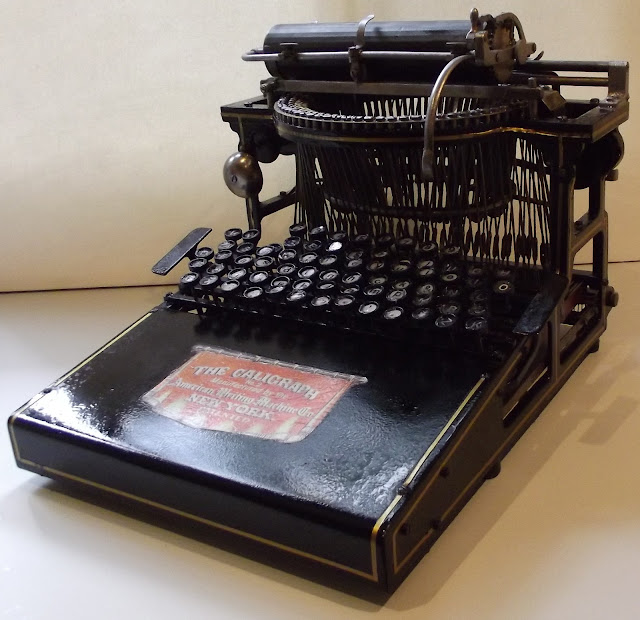 The metal parts on the carriage have been wire-brushed and sanded to remove surface flaking and corrosion.
There is still work to be done, touching up here and there. Some keys are "drooping" because their filaments (brush wire) connections are missing, causing the long connecting wooden typerods to drop down, and these will somehow need to be propped up. 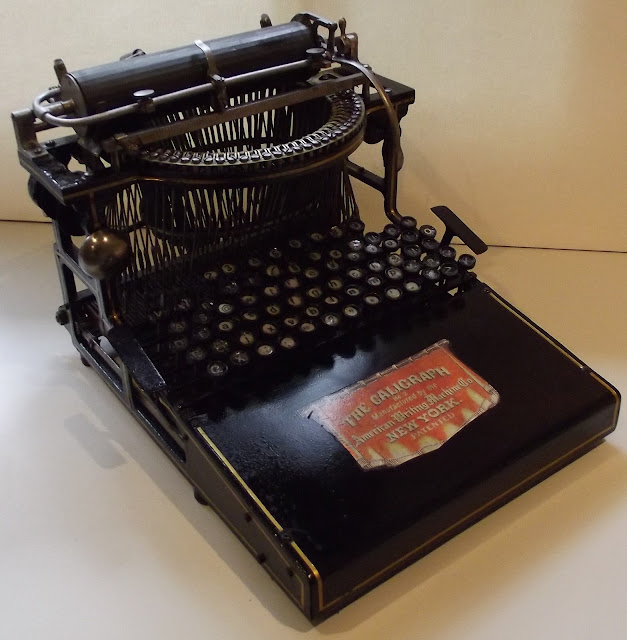 Anyway, I'm pleased with progress so far, but I welcome any comments.
I will probably be accused of being a Philistine for overlooking whatever imagined provenance this typewriter might have had. Oh, well, so be it.
Posted by Robert Messenger at 13:29

Looks like you have and will have the final result of a very nice and unique machine. I have never seen one of these before and your task seems very daunting. You do very nice work.

looks great so far, man. will be rooting for you in making it an operable machine.

Hi. I have been doing some research on the Caligraphs as there is a lot of misinformation out there on the type and I have been digging in old documents on google books to find out more. You Caligraph is a No. 3 Special which were introduced 1890 or 1892 and appear to have been replaced by the Caligraph 4 in late 1894. The Caligraph 3 Special (and the follow on 4) had a curved frame around the faceted platen.
There was an earlier Caligraph 3 that has a square corner frame around the Platen and like the No. 3 Special had 78 keys (six rows of 13) which apparently, Prior to the No. 3 there was a 48 key capital letters only Caligraph 1 and the most numerous version the Caligraph 2 (72 keys, six rows of 12).There were two Caligraph 1's, the first I think was a small version that was beefed up and Caligraph kept the designation 1. The 1, 2, and 3 I believe were all introduced in the 1881-1883 period and they were I think, all produced at least until the introduction to the Caligraph 4 that featured a more modern round platen (no facets) AND a curved frame to support the platen. Al Sumrall Old Hoodoo

Correction. I have discovered that there was no 78 (or 72) key regular frame No. 3 Caligraph of any kind before the No. 3 Special. There was a 54 key limited production specialty Caligraph No. 3 circa 1883 and maybe a wide carriage No.3 made in 1889 but I am not sure if that really existed or was part of the No. 3 special design. Sorry about that. Would love to know the serial number of this typewriter and if it is preceded with an asterisk *. I will reread to see if you mentioned it. Nice restoration by the way.