Australian Writers and Their Typewriters 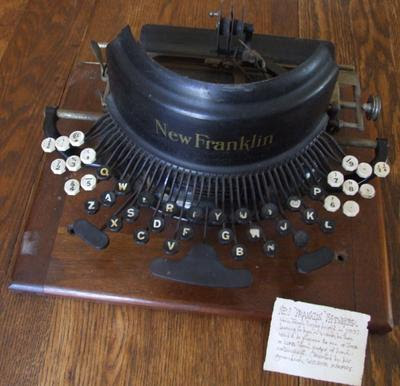 I didn’t know the Franklin typewriter had been sold in Australia until I chanced upon Roger Osborne’s blog, Tom Collins and Company, which is in large part devoted to the Australian writer Joseph Furphy (who wrote under the pseudonym Tom Collins) and Furphy’s works. Osborne has three posts about Furphy's Franklin.
Furphy (Irish: Seosamh Ó Foirbhilhe) was born on Yering Station, Victoria, on September 26, 1843. He is widely regarded as the "Father of the Australian novel". 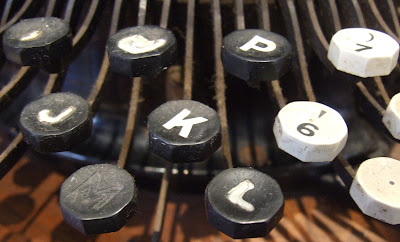 Osborne explains that in 1897 The Bulletin’s literary editor, A. G. Stephens, advised Furphy to have the handwritten manuscript of Furphy’s classic, Such is Life, typed. “Furphy bought himself a New Franklin typewriter and did the job himself [the New Franklin first appeared on the US market in 1896].
“When Furphy moved to Perth late in life, the typewriter he used to prepare Such is Life for publication came with him. It’s now in the care of Tom Collins House, the headquarters of the Fellowship of Australian Writers (Western Australia).” 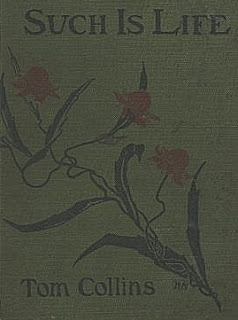 Such Is Life is a fictional account of the life of rural dwellers, including bullock drivers, squatters and itinerant travellers, in southern New South Wales and Victoria during the 1880s. It was published in 1903. 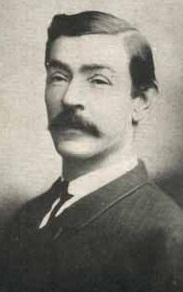 In 1905, Furphy moved to Western Australia, where he built a house at Swanbourne, now the headquarters of the West Australian branch of the Fellowship of Australian Writers. He died in Claremont on September 13, 1912, His biography was written by Miles Franklin (Joseph Furphy: The Legend of a Man and His Book, 1944), whose Corona 3 typewriter I now own. 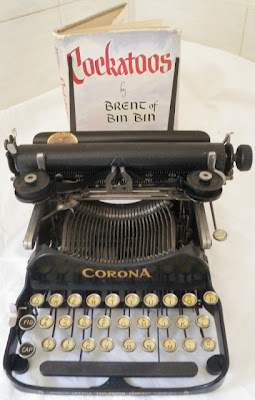 The Australian slang word furphy, meaning a "tall story”, originated not from Furphy’s writings but with water carts produced by J. Furphy & Sons, a company owned by Joseph's brother John. But Such Is Life contains possibly the first written incidence of the Australian and New Zealand idiom "ropeable". 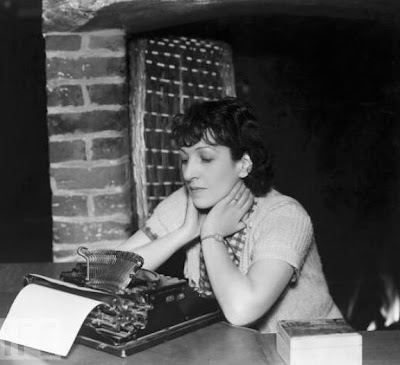 Evadne Price, seen here with her Remington portable typewriter, was a playwright, novelist, screen writer, children's author, actress and astrologer who wrote mostly under the pseudonym Helen Zenna Smith. She was born at sea off New South Wales in 1901.
She became famous for her many romance novels, most of which were serialised in national newspapers, as well as her children's books featuring the popular character Jane Turpin. Her semi-biographical novel Not So Quiet: Stepdaughters of War was a feminist riposte to All Quiet on the Western Front. She died in Sydney on April 27, 1985, aged 84. 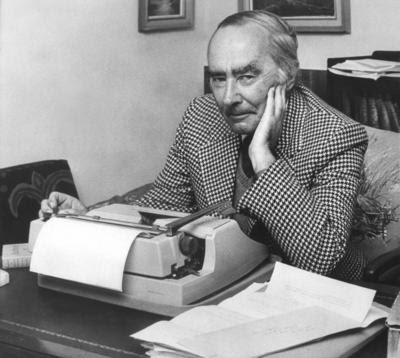 Poet, short story writer, essayist and literary editor Douglas Stewart is seen here in 1973 at his St Ives, Sydney, home. Stewart was born at Eltham, Taranaki, New Zealand, on May 6, 1913, to an Australian-born lawyer father.  For 20 years he was one of A.G. Stephen’s successors as literary editor of The Bulletin, as well as a publishing editor with Angus & Robertson. Literary critic Geoffrey Serle called Stewart "the greatest all-rounder of modern Australian literature" He died in Sydney on February 14, 1985, aged 71. 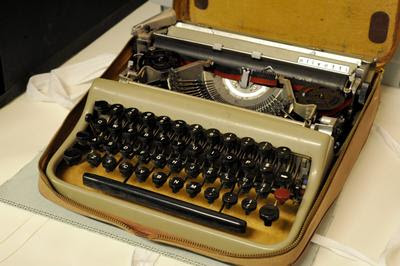 This is the Olivetti Lettera 22 portable typewriter used by Ray Lawler to write the great Australian play Summer of the Seventeenth Doll (the doll refers to a Kewpie doll). 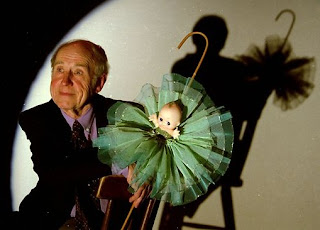 Raymond Evenor Lawler was born in Footscray, Melbourne, on May 23, 1921. He is an influential Australian actor, dramatist and producer. Summer of the Seventeenth Doll had its premiere in Melbourne in 1955 and changed the direction of Australian drama. 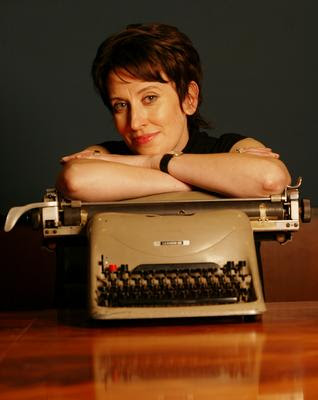 Virginia Frances Trioli, seen here with her Olivetti Lexikon typewriter in 2005. is an Australian journalist and author. She was born in Bendigo, Victoria, on August 16, 1964. She undertook postgraduate studies in New York from 1993–94 while working as a reporter for Melbourne’s The Age and later, like Stephens and Stewart before her, worked for The Bulletin. In 2001 she won a Walkley Award for her interview with former defence minister Peter Reith over the "Children Overboard Affair". She is the author of the book Generation F: Sex, Power and the Young Feminist published in 1996 as a riposte to Helen Garner's The First Stone. 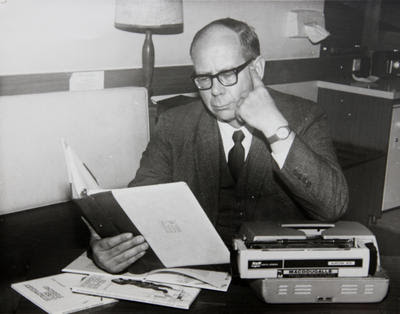 Gordon A. Rule, seen here at his home in Warrnambool, Victoria, was the creator of the children’s book character Humphrey B. Bear. Rule was born in Lechworth, England, in January 1927 and came to Australia after serving in World War II. Then he returned to England, where he met his wife, Joan, before the couple moved back to Australia as sponsored immigrants in 1958, living in Brisbane and then Adelaide. It was in Adelaide that he developed the children's book idea after Humphrey hit the television airwaves in 1965. His children Greg and Annette recalled their father tapping away on his typewriter at night after working as a salesman during the day. 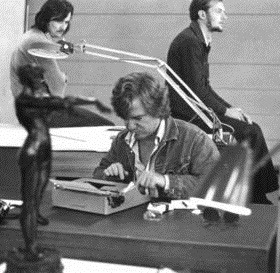 Art critic, historian and writer Robert Hughes, author of the 1987 international best seller The Fatal Shore, is seen here in 1979 with his Olivetti Lettera 32 portable typewriter while working on a script in the store which houses the National Collection of Art in Canberra. Robert Studley Forrest Hughes was born in Sydney on July 28 1938. He has resided in New York since 1970. 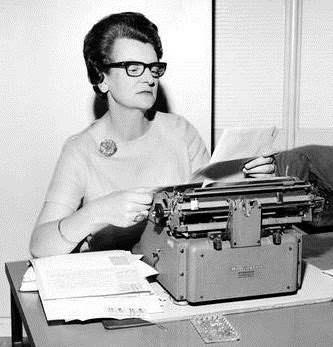 Journalist and author Nancy Nugent Dexter is seen here in 1967. Born in Coburg, Melbourne, on February 16, 1923, she was educated at Wagga Wagga High School and started in newspapers in 1941 as a copy-typist for the Wagga Wagga Daily Advertiser, and then moved to Sydney to monitor radio news for the Daily Telegraph. In 1946 she became a copy-typist at the Melbourne Herald, and in 1950 a cadet on its social pages.
As the women’s movement gained momentum in the 1970s, Dexter documented for The Age in Melbourne its agendas and debates with “guts and substance” (so recalled Beatrice Faust, a founder of the Women’s Electoral Lobby) while also normalising discussion of controversial subjects: “a drip wearing away a stone” was Dexter’s favoured metaphor. She died suddenly on April 21, 1983, aged 60, while on assignment as The Age’s travel editor. at Jaipur, India. 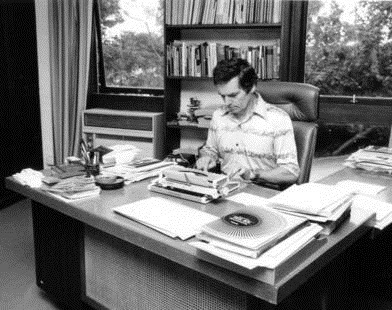 Well-known Welsh-born Australian motoring writer Pedr Davis with his Olympia Traveller de Luxe portable typewriter.  Davis befriended Stirling Moss when Moss was a tyro and was chauffeured at high speed by five-time World Formula One Champion, Juan Manuel Fangio. He  tested prototype cars in East Africa against a background of Mau Mau terrorism and in a 1962 interview, motorcycle-maker Soichiro Honda told Davis of his plans to make “the best cars in the world”. Davis was one of the few journalists allowed to drive the first real car, the 1885 Benz, and the first to drive the car powered by Ralph Sarich's amazing orbital engine.

Posted by Robert Messenger at 23:11