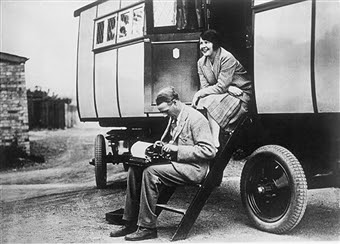 So attached to his portable typewriter was American novelist and playwright Sinclair Lewis that in 1928 he took it with him on his honeymoon. And his new wife, the journalist Dorothy Thompson, seemed amused!
He even found time to use it – on the steps of the specially-built 17-foot long caravan in which Lewis and Thompson spend three summer months touring England and Scotland from May-August 1928. The caravan, by the way, was “equipped as a bungalow, with kitchen and living room” – but, apparently, no typing room! 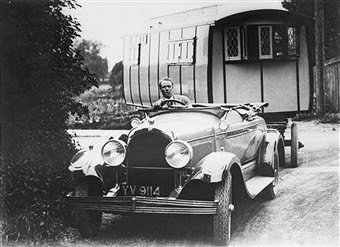 Perhaps the step typing break was some respite from the early joys of marital bliss. At the time, a female admirer had written to Lewis  offering to be his secretary. She added, "I’ll do everything for you - and when I say everything, I mean everything." (By which, presumably, she meant she’d pour his next drink). Anyway, Dorothy, not Lewis, replied:
My dear Miss:
My husband already has a stenographer who handles his work for him. And, as for "everything," I take care of that myself - and when I say everything I mean everything.
Dorothy Thompson
(Mrs Sinclair Lewis to you.)*
*Posted last week on Shaun Usher’s Letters of Note: Correspondence Deserving of a Wider Audience blog.
Indeed, in April 1930, after the couple had returned to the United States to settle in Barnard Town, Windsor, Vermont, and filled out their census forms, the dutiful Dorothy listed herself as “Mrs Dorothy T. Lewis”. She never lost her identity, though. 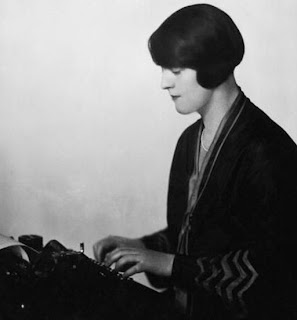 Then again, Dorothy was apparently a quite loquacious lady, and Lewis – perhaps like today’s furtive husband, who has fibbed to his wife that he’s given up smoking for her – just needed to step outside to take a breather. And talk to a man about a dog. And type …
Who knows? But taking a typewriter on a honeymoon? Not even I have done that. Yet. (Not that I can recall, anyway ...) 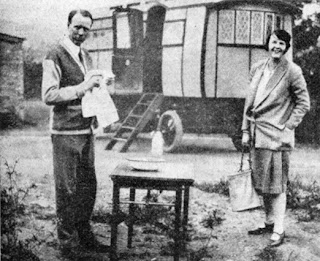 Still, the justification may well have been that Lewis was working on his next novel, Dodsworth, a satirical work published by Harcourt Brace & Company in March 1929. It was about the differences between US and European intellect, manners and morals. Do Europeans, for example, use a typewriter on their honeymoons? 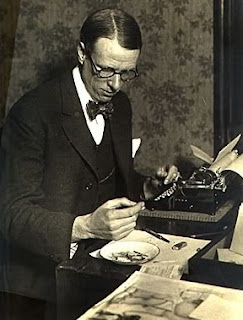 Using a Fox portable? Lewis is certainly using a Fox standard below: 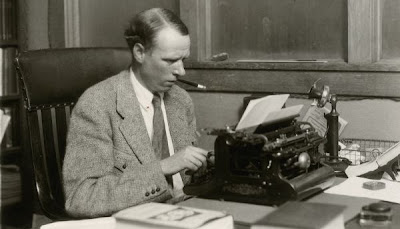 In 1930, Lewis became the first American writer to win the Nobel Prize in Literature, "for his vigorous and graphic art of description and his ability to create, with wit and humour, new types of characters." His writing contained “strong characterisations of modern working women”.

Dorothy Thompson was certainly a modern working woman, by then or now standards. Nonetheless, in writing to a friend in Berlin about her impending nuptials and honeymoon with the typewriter-laden Lewis, she said, “I am going to cook and Sinclair will drive (the touring car which pulled the large caravan)”. 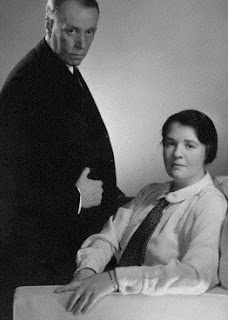 Vincent Sheean, towards the end of this moving 1963 memoir about Lewis and Thompson,   Dorothy and Red, wrote, "It is a misfortune - nobody is to blame - that the greatest of American journalists should have been married to the greatest of American writers. Such things ought not to happen."
And sure enough, the marriage, which took place in London on May 14, 1928, didn’t last long – though long enough to produce a son, Michael, born in New York City on June 20, 1930, and later a TV actor (Michael died in a plane crash in New Jersey in 1975, aged 44). 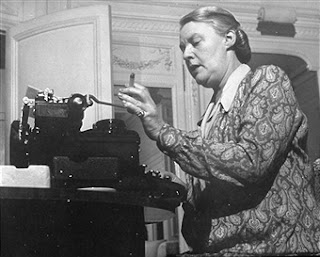 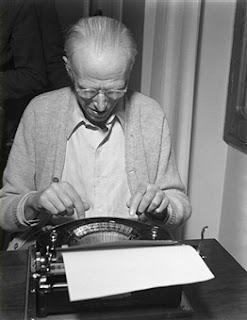 Lewis, Vienna, 1949
The couple parted ways in 1937 and Dorothy was eventually granted a divorce and custody of Michael by a Vermont judge on January 3, 1942, on the grounds of "wilful desertion."

Lewis and Thompson met in Berlin in July 1927, not long after Thompson had become head of the New York Evening Post's Berlin office. The still-married (to Vogue editor Grace Livingston Hegger) Lewis was so smitten he pursued Thompson throughout Europe, including to the Soviet Union. Hegger officially ended her marriage to Lewis the day after its 14th anniversary, by obtaining a Reno divorce on April 16, 1928, on the grounds of desertion. She gained custody of their son Wells (named after H.G.Wells; he died in 1944 while serving in World War II). Lewis remarried exactly one month later - it was a second marriage for both he and Thompson. 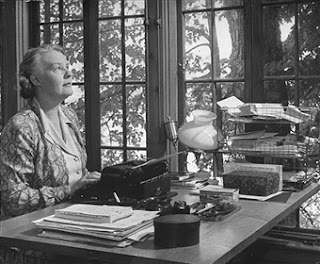 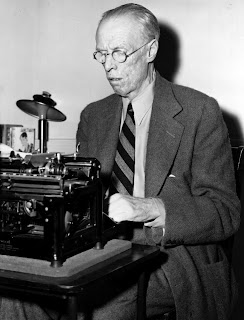 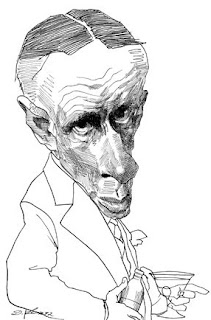 Dorothy Thompson was born in Lancaster, New York, on July 9, 1893, and died in Lisbon, Portugal on January 30, 1961, aged 67. In 1939 she was recognised by Time magazine as the second most influential woman in America next to Eleanor Roosevelt. She was the first American journalist to be expelled from Nazi Germany, in 1934, and was one of the few women news commentators on radio during the 1930s. Thompson is often referred to as the “First Lady of American Journalism.” 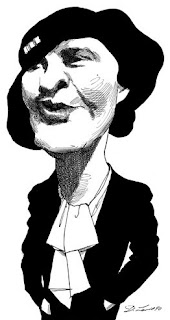 I'm left wondering: Did Dorothy also take her typewriter on her honeymoon?
From The New York Times of April 24, 1928 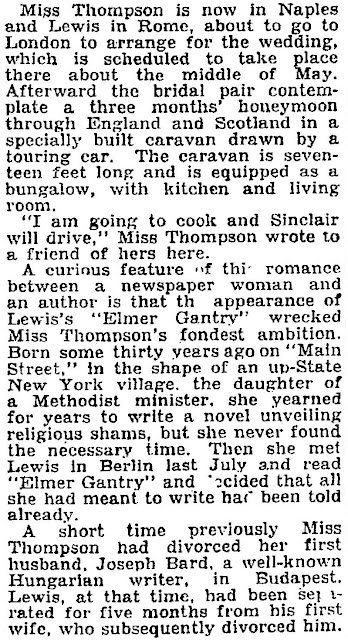 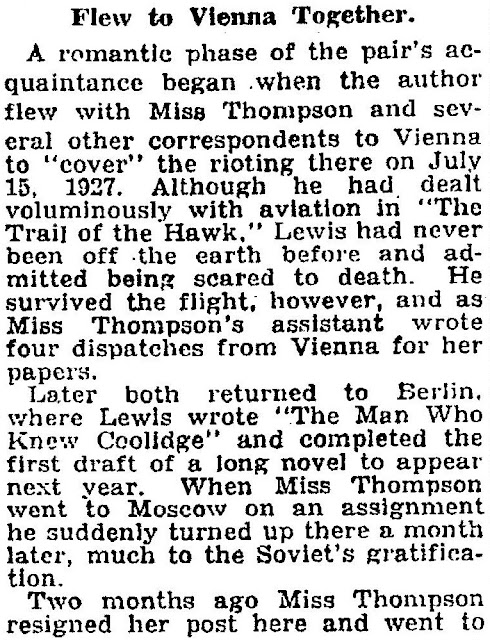 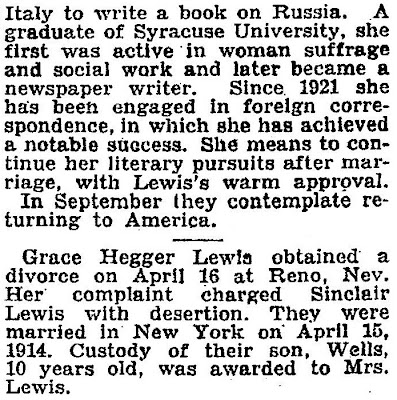 Well this is...odd. I've just started a blog so I could post the journal I kept on my recent honeymoon...with my typewriter, of course. We hit flea markets and antique stores in search of goodies for about a week, spanning several states. Unfortunately, my scanner is not up and running, so I cannot post it quite yet. But I am going to the office supply tonight. :)
Nice article. I am envious of his Fox Portable. Such lovely machines that I cannot seem to get a hold of..

Interesting and well researched, as always! I will add some of these photos to my collection of writers and their machines.

(I see that Google is now getting people to identify words and numbers in photos in their captcha system. I don't feel like playing along. I'm putting in gibberish for the photos and it works.)

Thanks Richard, and welcome back. How was Europe?