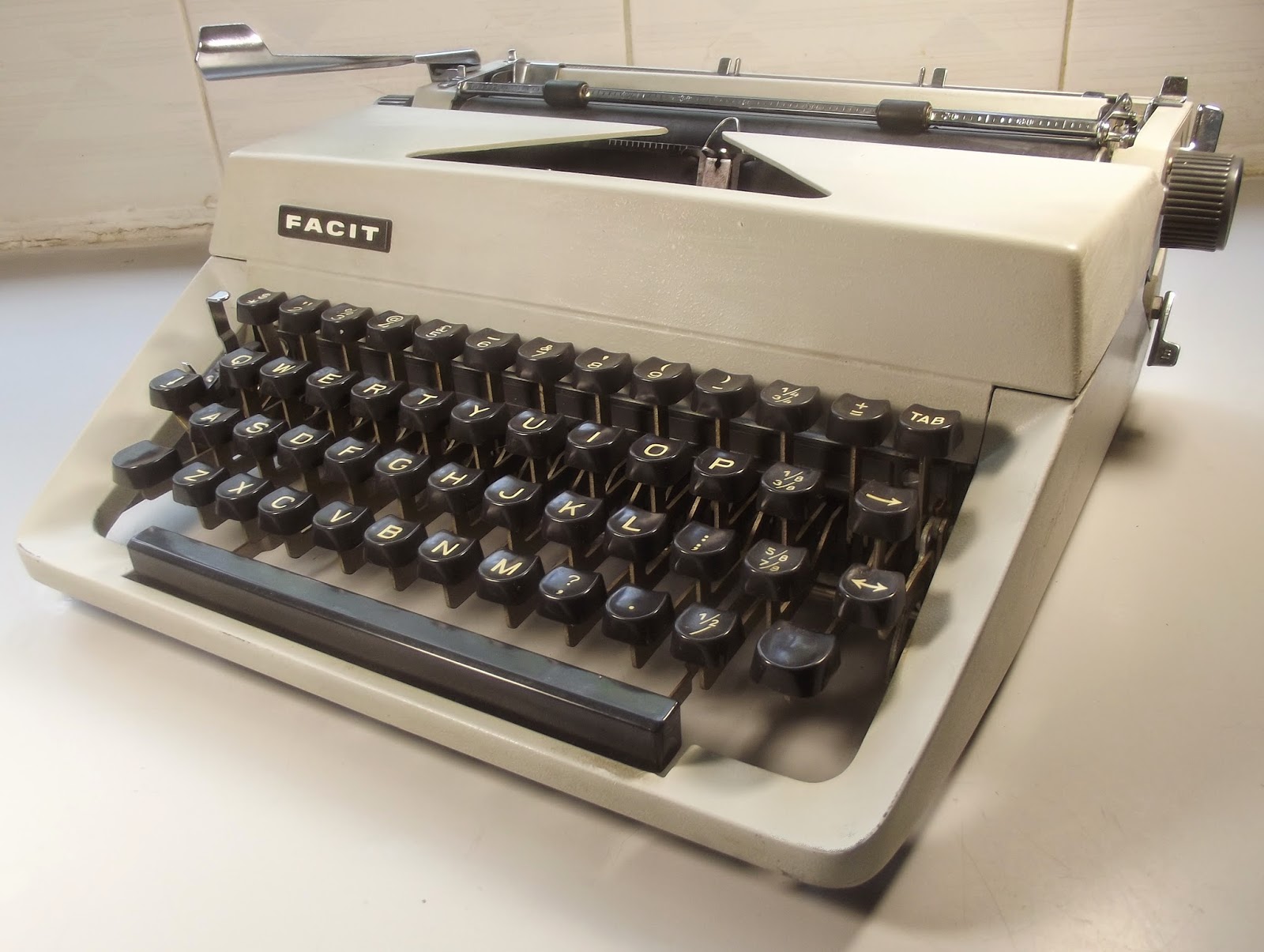 This Facit TP1 portable typewriter belongs to former journalist Graham Downie, famous in Canberra newspaper circles for his run-in with a former Prime Minister. It is absolutely astonishing that Graham can use this typewriter at all. Why? See below. 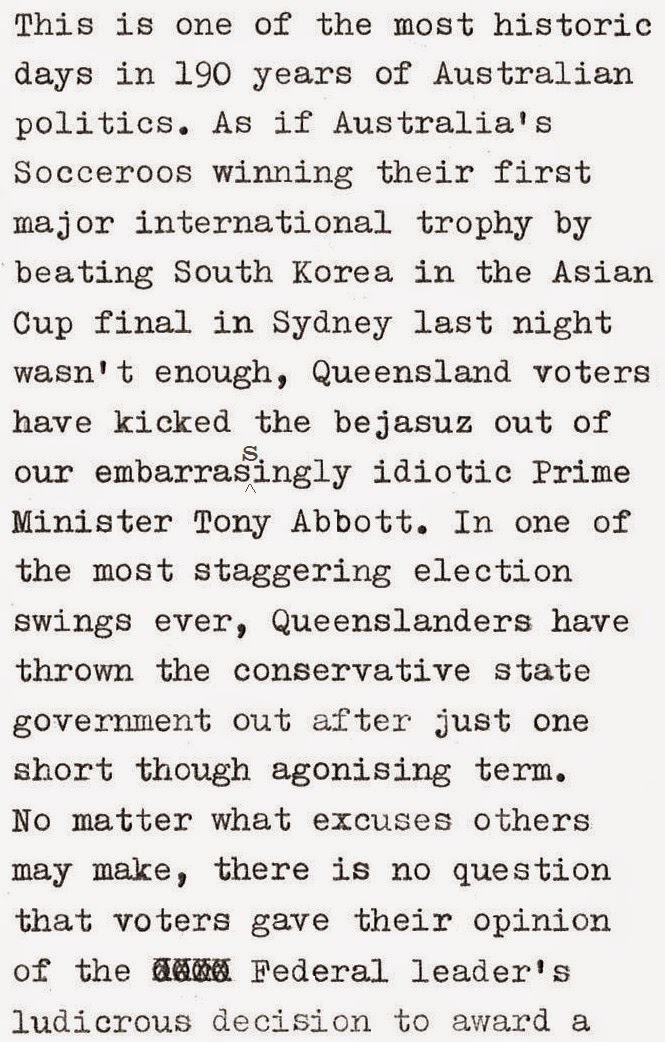 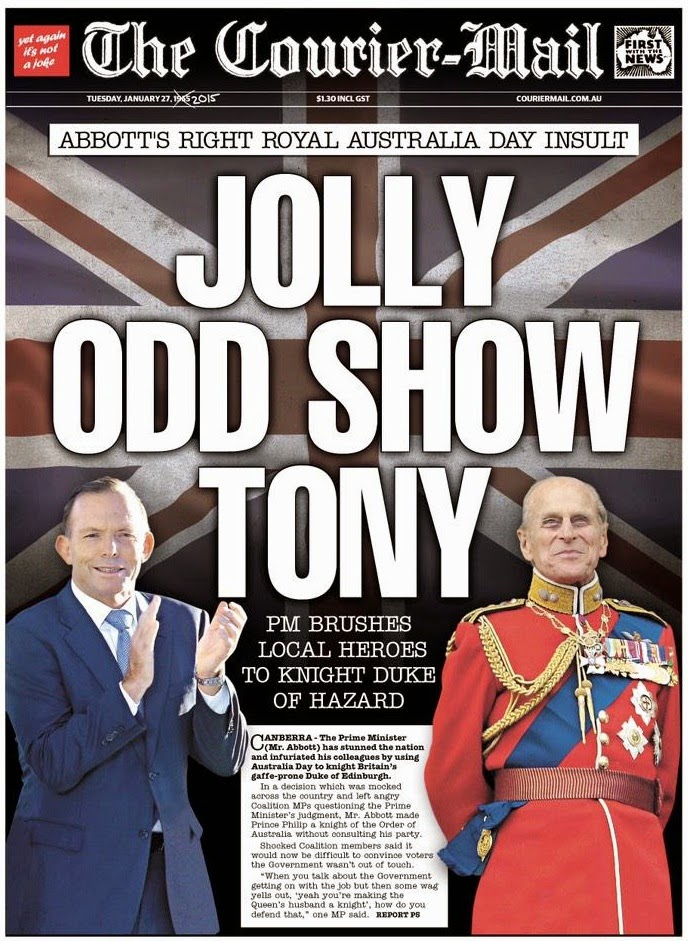 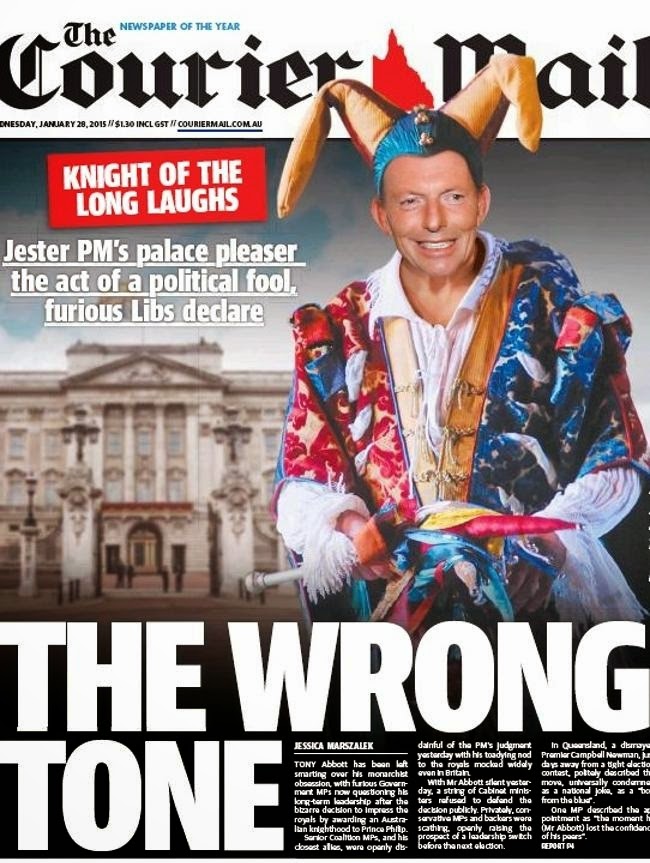 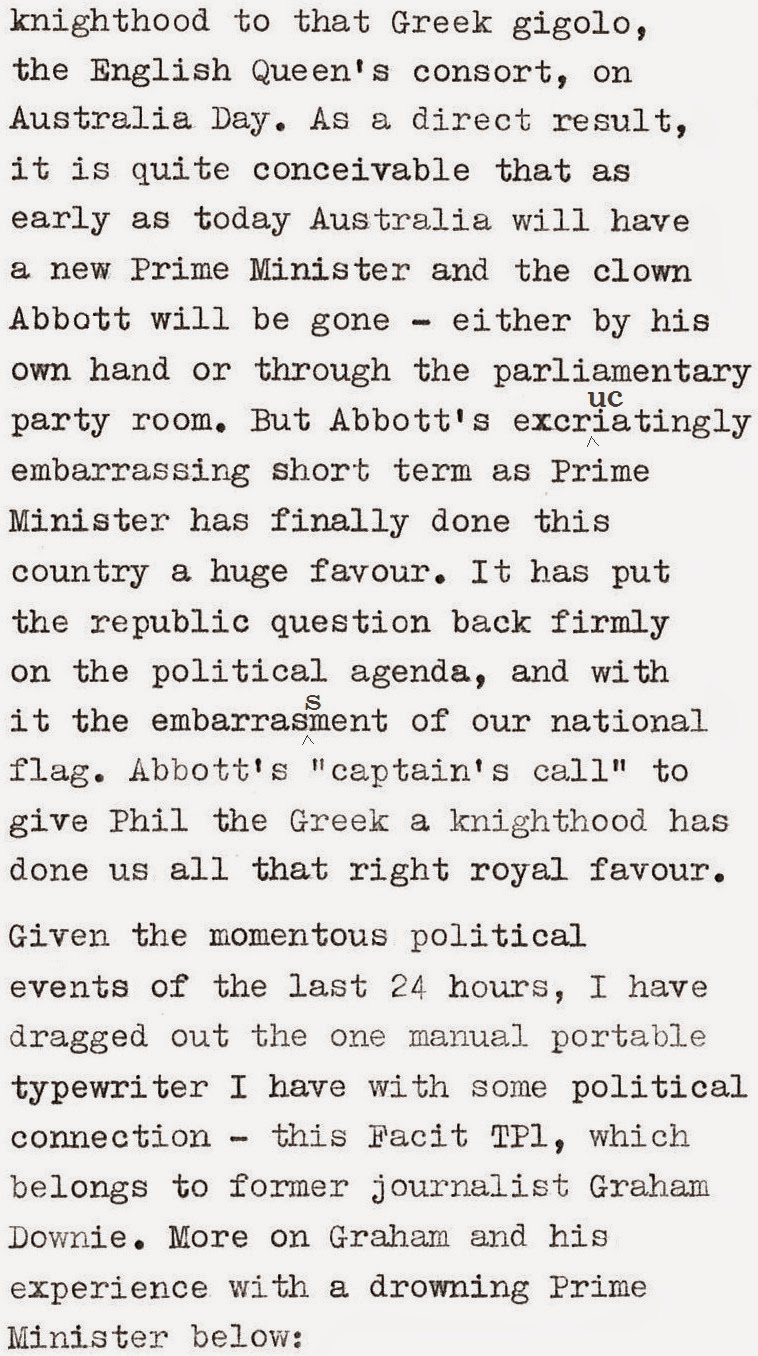 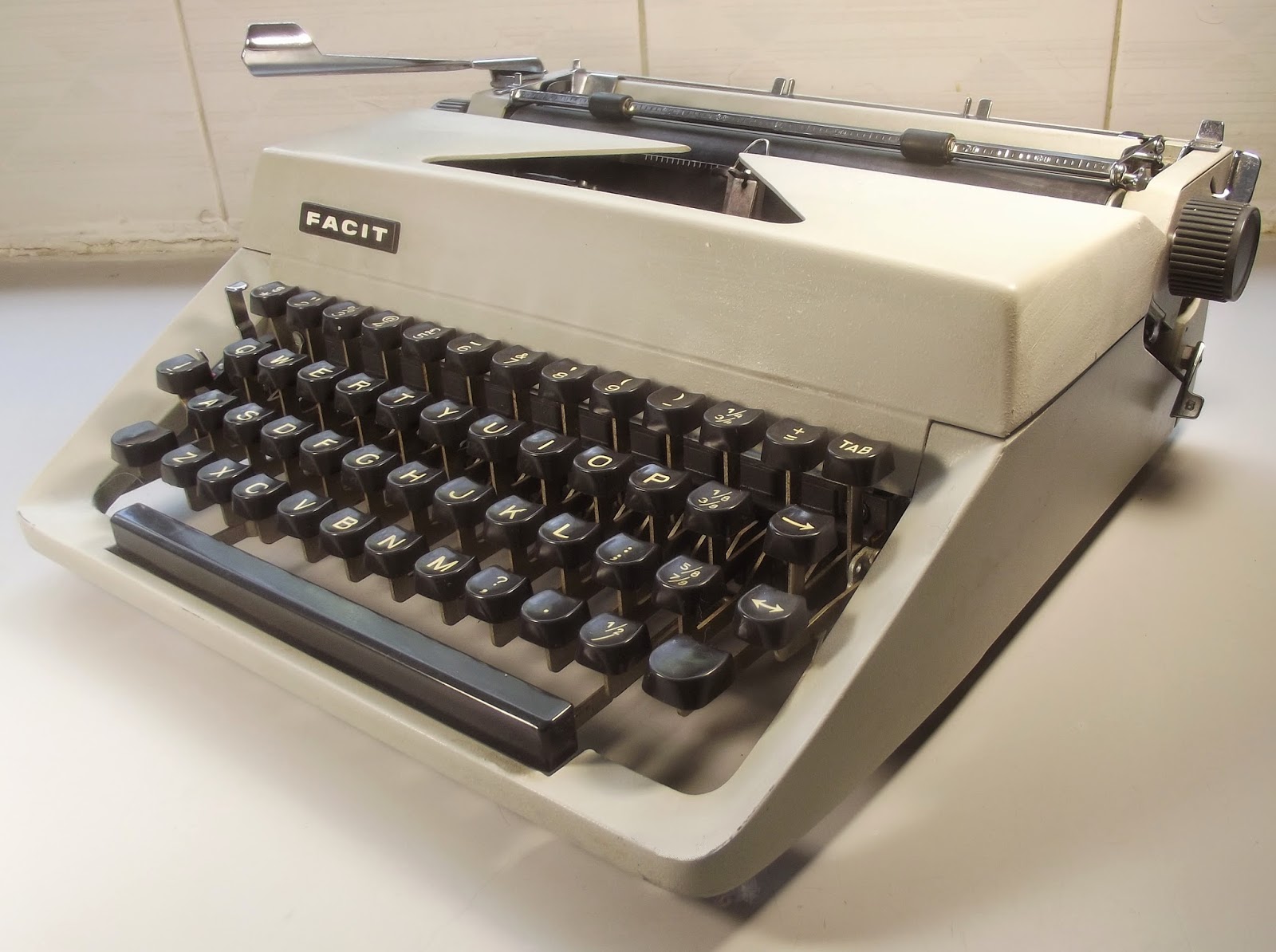 Born on a table top in sunny Corfu
Greekest isle for habits taboo
Stuck in a fruit box, to Blighty skidoo
Shagged him a queen when she was 22.
Philo, Phil the Greek, Knight of the land of Oz.
- with apologies to The Ballad of Davy Crockett writers George Bruns (corr) and Thomas W.Blackburn 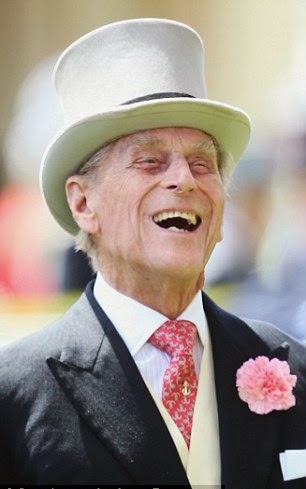 'I thought those oarful Oarsetralians were still throwin' spears at one another! I didn't realise they were throwin' knighthoods around, too! '*
*Think I'm exaggerating? In 2002, this Greek gigolo asked Australian Aborigines, "Do you still throw spears at each other?" I kid you not.
Phil the Greek, His Royal Highness The Prince Philip, Duke of Edinburgh, Earl of Merioneth, Baron Greenwich, Royal Knight of the Most Noble Order of the Garter, Extra Knight of the Most Ancient and Most Noble Order of the Thistle, Member of the Order of Merit, Grand Master and First and Principal Knight Grand Cross of the Most Excellent Order of the British Empire and now Knight of the Order of Australia. This was Australian Prime Minister Tony Abbott's idea of a very sick Australia Day joke. 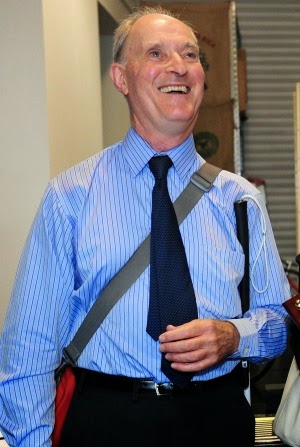 Facit TP1 owner Graham Downie
Tony Abbott and Graham Downie are at the opposite ends of the human spectrum. One has a lifetime record of serving with diligence, honesty and sincerity the best interests of Australian men and women. Unlike Tony Abbott, who is happily on the way out as Prime Minister of Australia, already retired Canberra journalist Graham Downie has a very good excuse for not being able to see the lay of the land. Graham is totally blind, but still able to use a typewriter. And I mean a manual portable typewriter, not a Perkins Brailler (which he also uses). In a long career in print newspaper journalism, Graham wrote tens of thousands of words on his Facit TP1 typewriter. 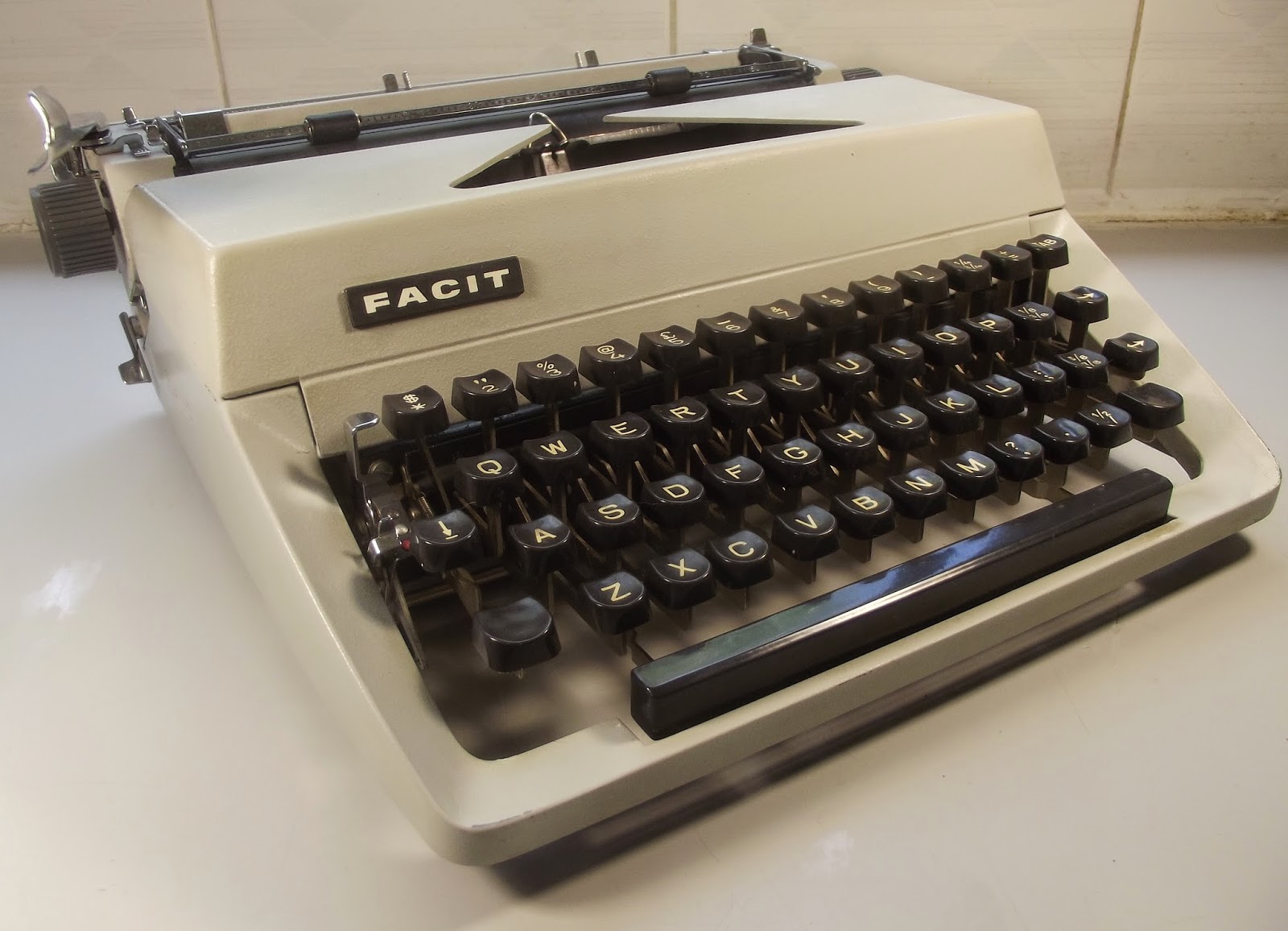 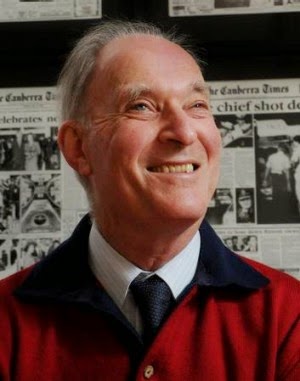 When the then 64-year-old Graham retired after more than 40 years at The Canberra Times, in early October 2012, chief-of-staff John-Paul Moloney wrote a enchanting story about him, which I have adapted here:
Downie started out as a switchboard telephonist at The Canberra Times and in July 1972 applied to the then editor John Allan for a job helping write the consumer affairs column, Voters' Voice. ''I am not a journalist, but I am practised in writing reports,'' Downie wrote. Those reports - extensive coverage of synods - were typed on Graham's Facit TP1 portable typewriter, not a Brailler, so that they were sub-editing and typesetting ready.
Allan knocked back Graham's application. "The problems are rather too great. Voters' Voice requires a great deal of research of material supplied by people who complain and those who are defending themselves. I do not think it would be a practicable proposition to employ you to handle the position."
Graham moved to Victoria and took a job with the Guide Dogs Association. But on a visit back to Canberra a year later he applied again, this time in person to the new editor Ian Mathews. Mathews agonised over the request, struggling to see how it could work to have a blind newspaper reporter. Among many practical concerns, the newsroom was a chaotic maze of a place in Mort Street. Corridors were often jammed with reporters' rubbish bins. As deadlines bore down, reporters would move fast and frantically. It hardly seemed a place for a blind man. There was also the clerical support that would be needed. Someone would need to read mail to Graham and help with filing. Finally, there was the question of whether the readers themselves would accept that a person who can't see could solve their problems.
But this was Graham Downie, and he had shown surprising potential during his stint as a telephonist. Mathews wrote to Graham in November 1973, ''I feel that whatever objections or reservations I may have about a blind man working in the editorial department of The Canberra Times, it is not realistic to make a decision until the matter has been proved in a practical way. Therefore, I will offer you a position as a D-grade journalist at a weekly salary of $93 on the understanding that the position is reviewed realistically at the end of three months. In the final analysis, it will depend on how good a journalist you are." 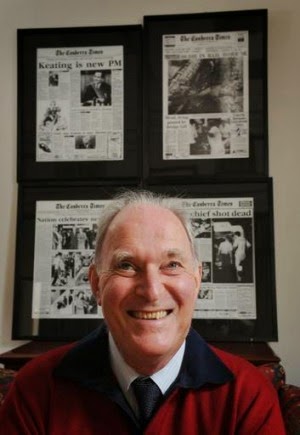 Graham went on, over almost 39 years, to deal with an estimated 14,600 people in what became the longest running column (renamed "Consumer Voice)" by an individual in an Australian metropolitan newspaper. He tackled all kinds of shonks, snake oil salesmen, dodgy tradies and uncaring corporations. His ''please explain'' letters, at first typed on his Facit TP1, resulted in thousands of wins for his ''regular punters''. He named and shamed and made a difference in the lives of one Canberran or another just about every week of his career. Within months of starting as a reporter, Graham was offered the religious affairs beat, known then simply as the "God round''. He reported on ideological battles between conservatives and progressives, on issues such as religious celibacy, women priests, sex abuse and gay marriage.
Like the late author Colleen McCullough, Graham was born in Wellington in country New South Wales and grew up on a farm 60 miles from Wagga Wagga. In his earliest years he had a small amount of sight in one eye and could read some large print, such as newspaper headlines. But a school accident when he was 11 took away that tiny amount of sight. Even the small ability to register light slipped away from him from over the next 20 years.
Long before I found he still used a typewriter, the thing that first astonished me about Graham was his ability to listen to music and rearrange the tunes, with his passion for playing guitar. I was pleased to be able to help him in this, as we shared a fondness for the late, great Canadian folk singer and songwriter Stan Rogers. Like James Joyce, Graham's blindness never prevented him from knowing exactly where he was at any one time. 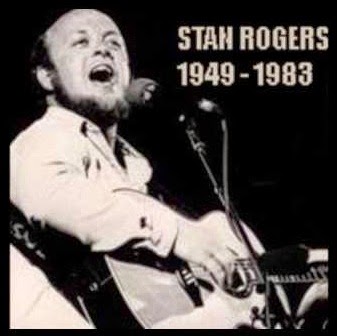 Graham's famous run-in with a former Prime Minister was with Paul Keating in 1996. In an odd set of coincidences, around the time of Abbott knighting Phil the Greek, we were reminded of that tumultuous political period from 19 years ago, when John Howard, the PM so admired by Abbott, succeeded Keating.
Ian Warden wrote, "If you had to choose the single most awful thing about John Howard as displayed during the long, unpleasant years of his prime ministerships, what would it be? Yes, I know the selection is bewilderingly huge, a smorgasbord, but some of us would plump for the artful ways in which he was, to use Nick Dyrenfurth's words, 'mateship's best mate'. Howard's insincere invocations of 'mate' and 'mateship' seemed to give our politics a sentimental kitschness, a khaki hue. It's heartening to be reminded by Dyrenfurth's Mateship - A Very Australian History, that one was not alone in being driven up the wall by Howard being (surely only pretending to be) mateship's gun chum. Here from the book is the Howard-goaded Michael Leunig, going up the wall with us. 'Howard's use of 'mate' is all wrong, and deliberately so, for he has nicked the word from the old working class so he can pose as a salt-of-the-earth, egalitarian bloke. But he's no such man; he's from the silver-tail tribe, as everybody knows. He might as well dangle corks from his Akubra hat. Howard is not a mateship man ... he speaks fluent spin, but mateship and its language are not really in his bones.'"
That appeared two days before Abbott dropped his knighthood clanger. The next day, on the eve of Australia Day, Opposition Leader Bill Shorten launched Dyrenfurth's book and used the opportunity to urge Australians to support an Australian republic and head of state, arguing it would reflect the nation's "modern identity, our place in our region and our world". Last Friday, in the Good Weekend, David Day wrote about Keating "never completing" his vision for Australia after a defeat "that still leaves him rankled nearly two decades later". The story referred to Keating moving out of PM's residence, The Lodge, and into "rented accommodation in the former East German embassy in Canberra's suburban Red Hill". 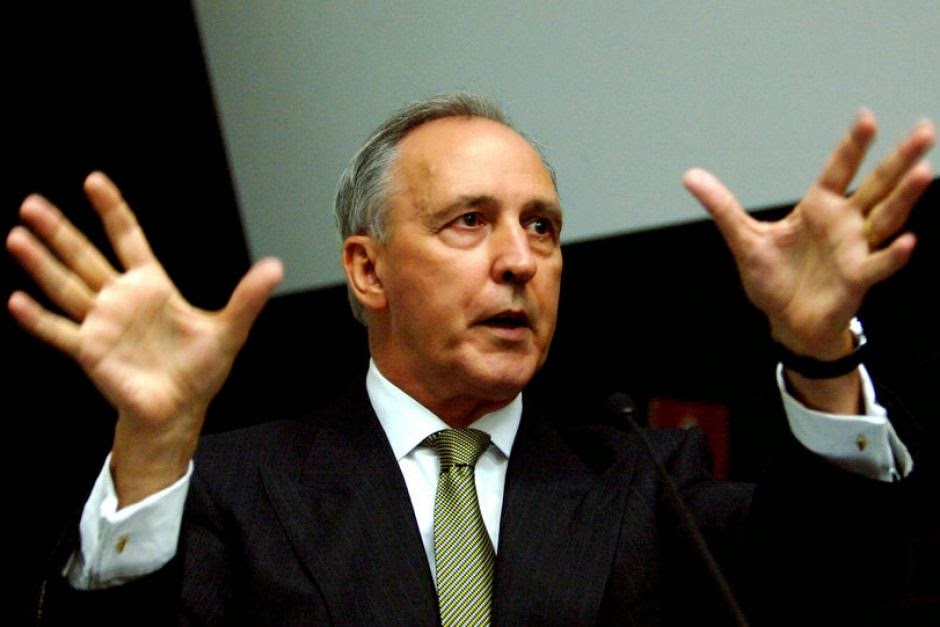 Former Prime Minister Paul Keating
This is where Graham comes in. The Canberra Times ran a front page photo which clearly identified the street and street number of the rented accommodation, and an already angry Keating was beside himself with rage. First thing Saturday morning he called The Canberra Times to express his intense displeasure. Unfortunately, the only person in the building at the time was Graham.
Graham politely answered the call, only to be subjected to an outpouring of abuse. Not knowing the circumstances, Graham, just kept saying, "Yes, Mr Keating". Frustrated that he wasn't getting anywhere with his complaint about the photo, Keating finally burst out, "What's the matter with you? Are you f***ing blind?" To which Graham calmly replied, "Yes, as a matter of fact I am, Mr Keating." The former PM responded, "Well, put someone on who can see!" 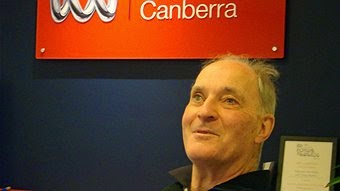 Here is the barely-touched Perkins Brailler I have promised to give Graham to replace his own well-used and almost worn-out machine. I have no use for it here anymore, so Graham might as well operate it: 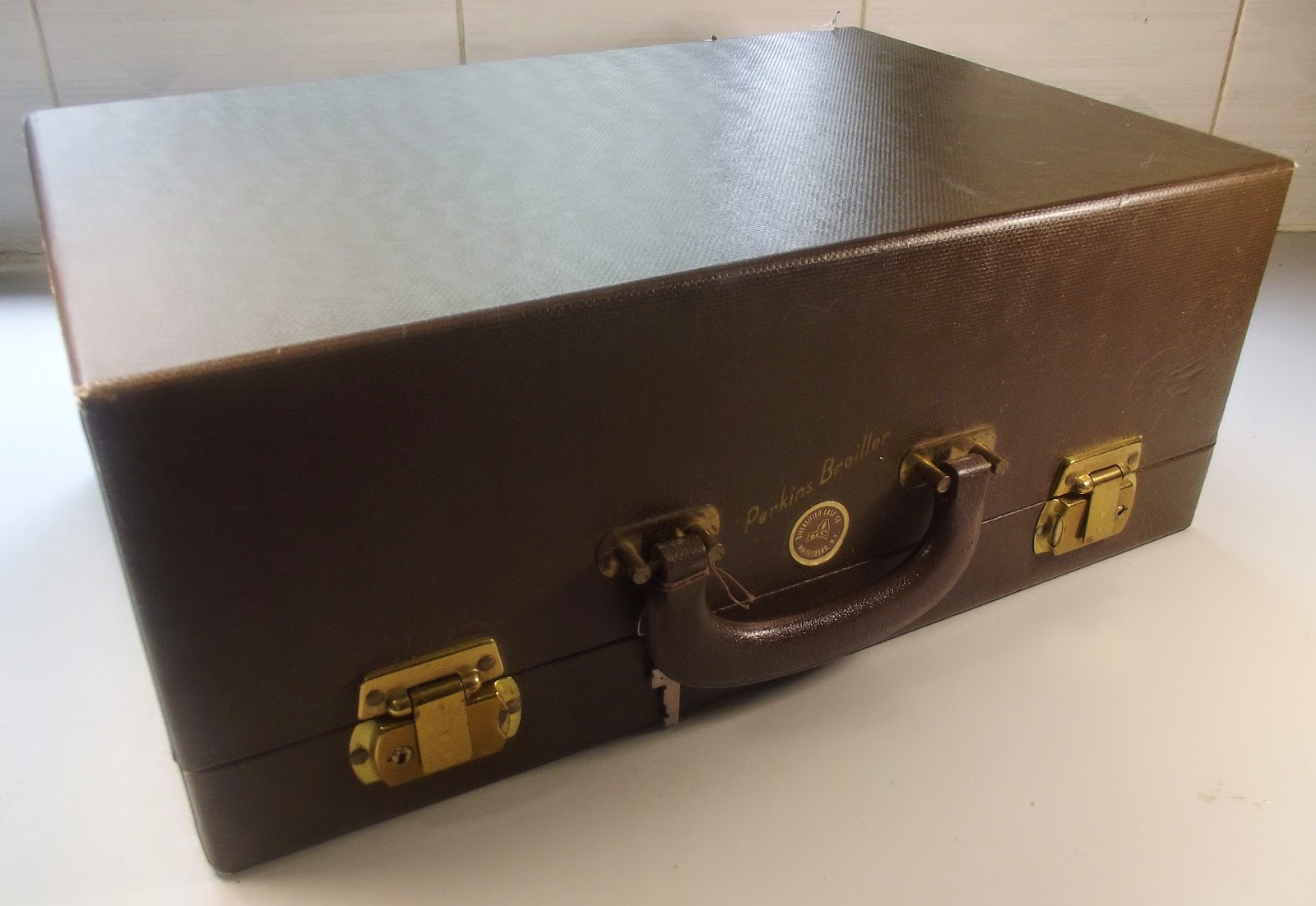 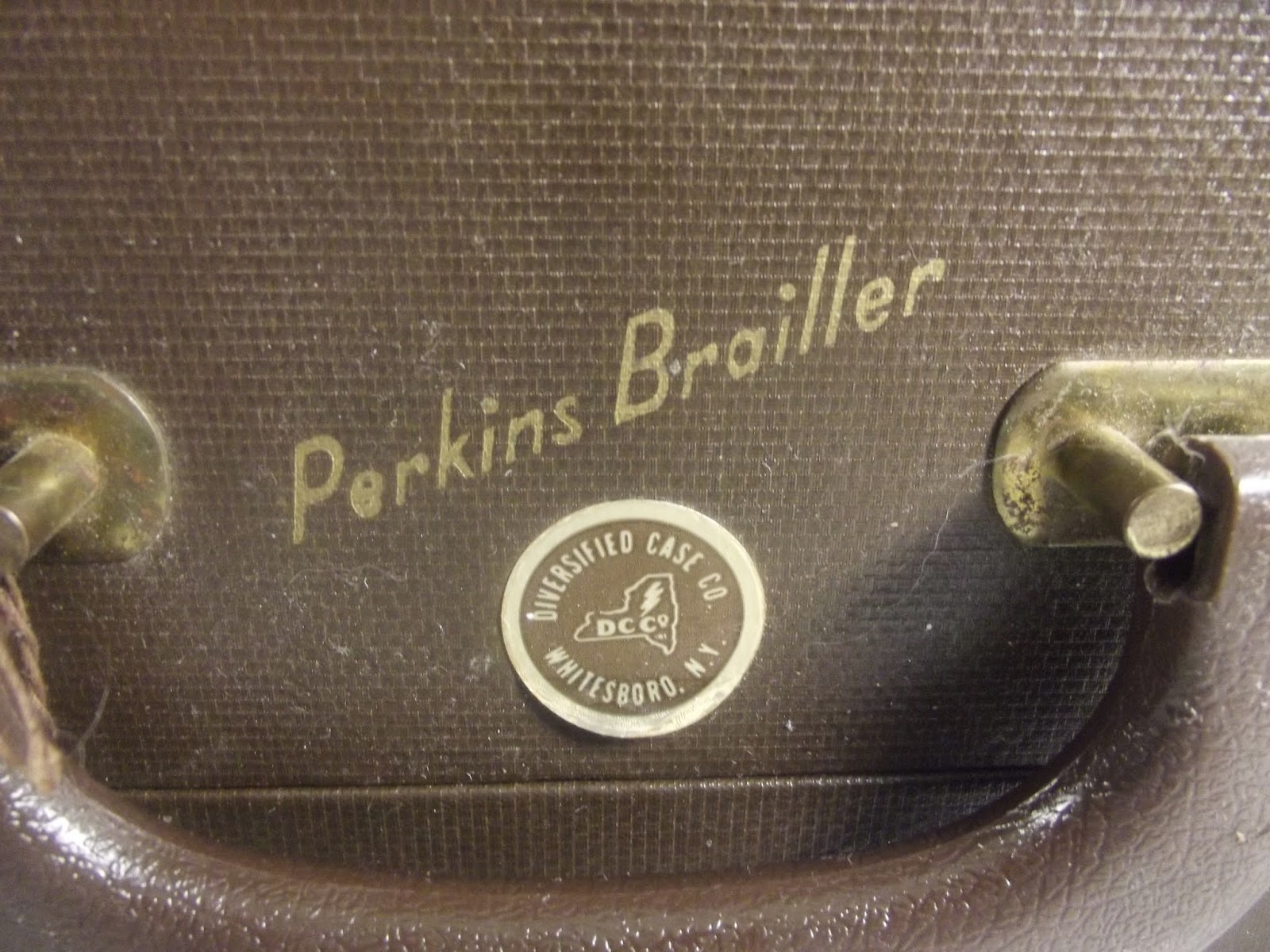 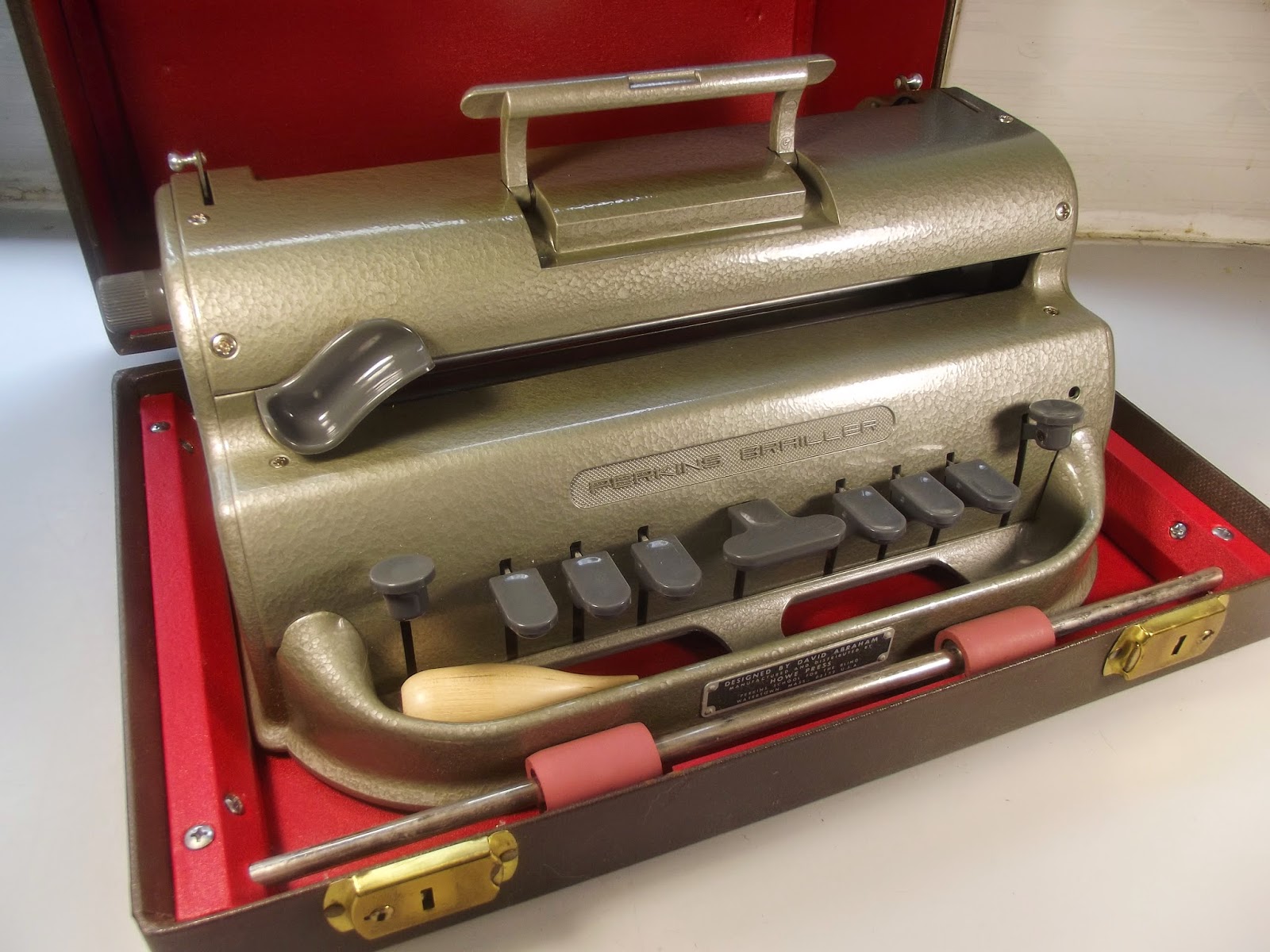 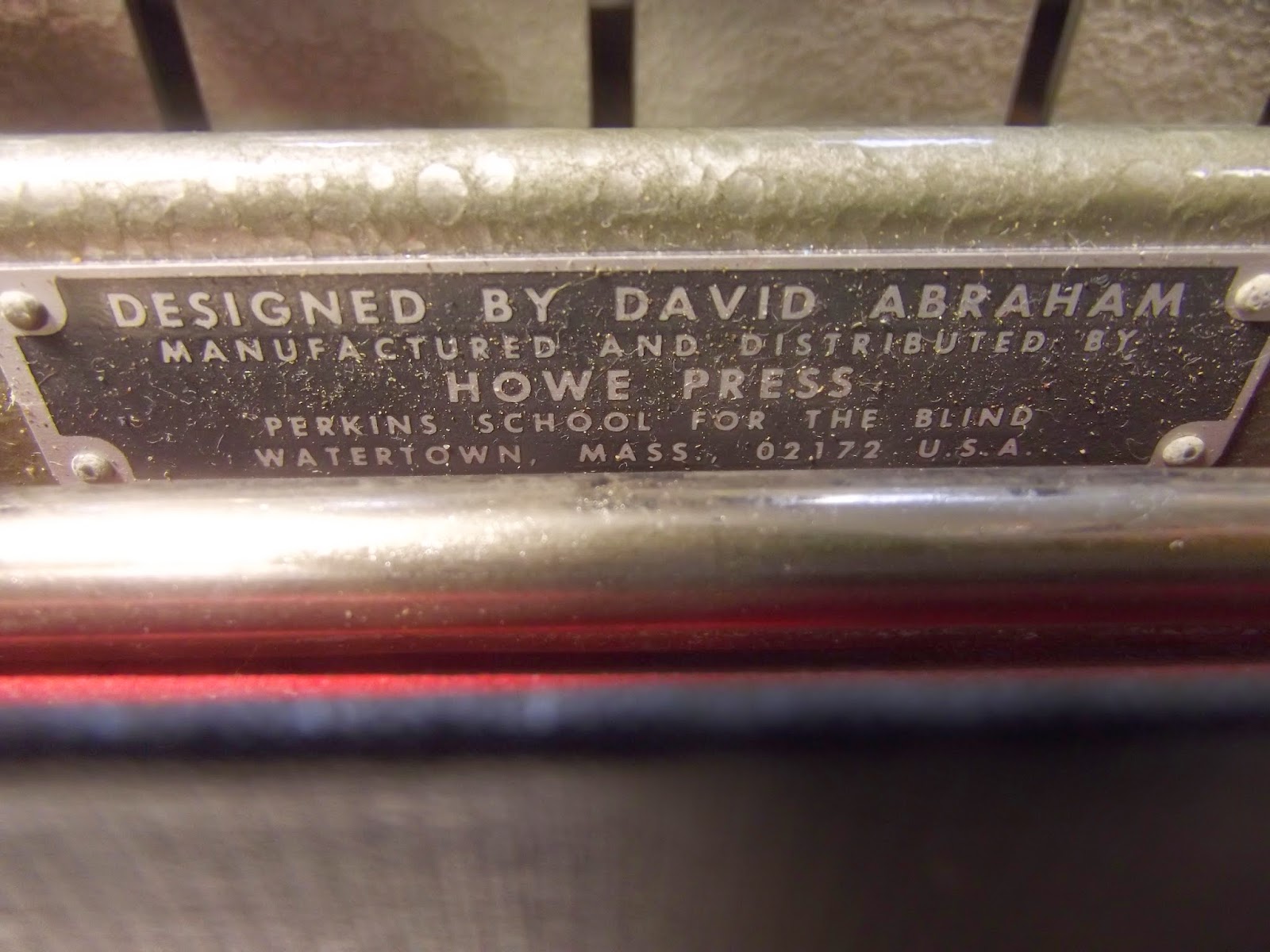 Graham's Facit TP1 was in need of a good service. Someone had borrowed it and used WD40 on it. At first I thought I had overcome the problems of a heavy touch and a sluggish carriage by simply using a degreaser. That fixed the touch and carriage, but unfortunately the congealed WD40 had also got in under the ribbon spools capstan, and I have yet to get the spools turning as they should.
Posted by Robert Messenger at 00:41

As far as I'm concerned, Graham Downie is legendary.

makes me appreciate my eyesight (and my TP1) even more! :)