Unreliable Memories: Why the McCarthy Olivetti Lettera 32 Story is Full of Holes

"I think that when the lies are all told and forgot the truth will be there yet."
― Cormac McCarthy, No Country for Old Men 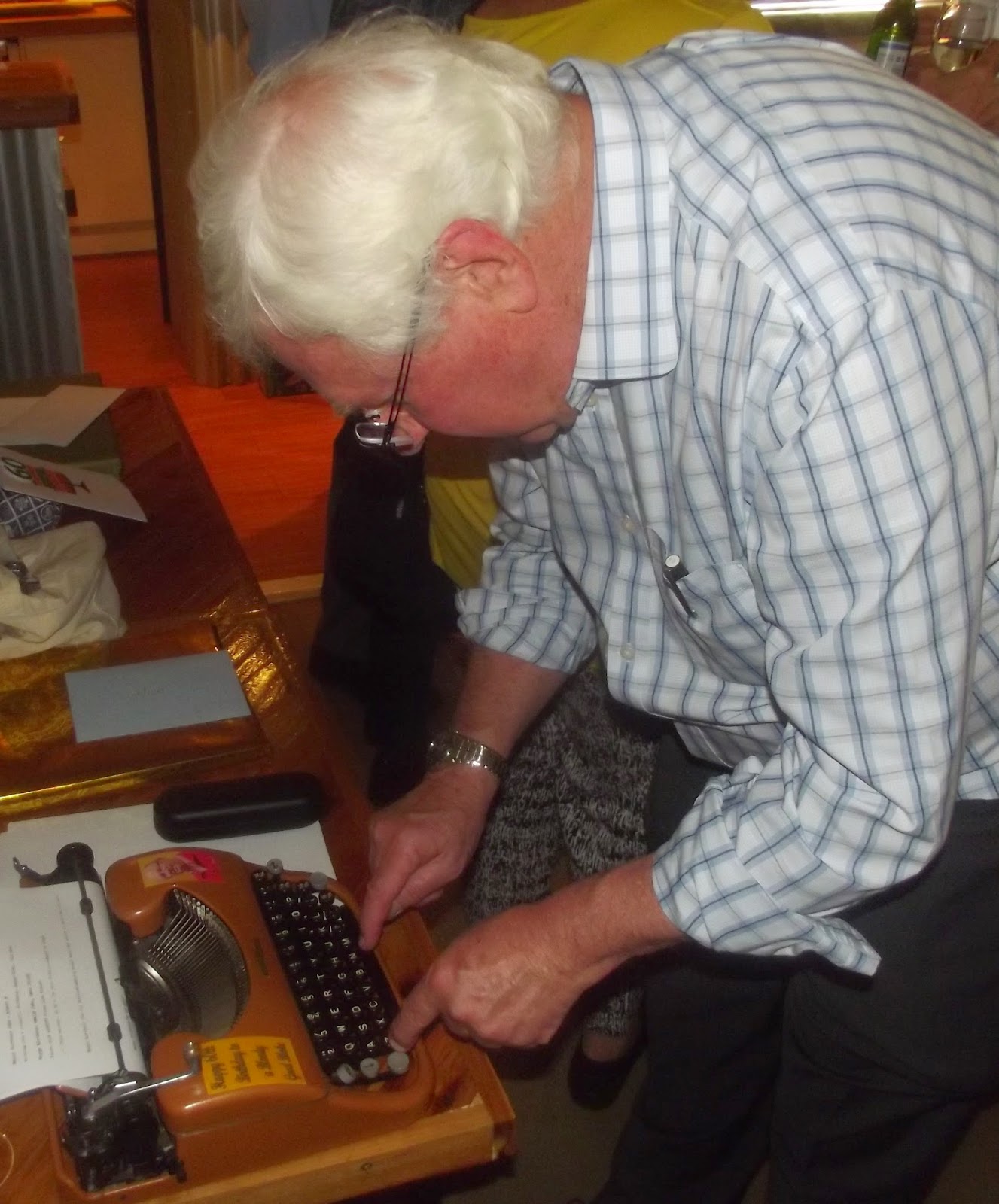 Peter Crossing is one of those mates for whom one would always make an exception - and an effort. After all, Peter has gone out of his way, dragging along his ever-loving wife Deborah in the process, to not alone find but photograph for me the Sholes & Glidden in the Smithsonian in Washington DC, the "Rose in the Barbwire Forest" Voss in the women's history museum in Hanoi, and typewriters in a museum in Bridgetown, Barbados. Better still, Peter and Deborah hosted that superb QWERTY Award evening at their home in Curtin last October. 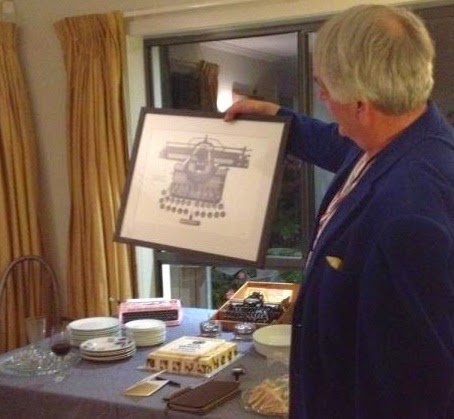 So when Peter came looking for a portable typewriter for his friend Michael back in his native Adelaide, I naturally got on with the job. After bad experiences with some brain dead South Australians last year, I vowed I'd never again send a typewriter beyond MacCabe Corner. But this request was, as I said, an exception.
Michael, Peter explained, has a desire to try his hand at writing, and had mentioned he'd like to return to the typewriter after many years of being left utterly uninspired by using computers. Michael had a birthday coming up in the New Year, and Peter planned to make the journey west and surprise him with a suitable writing machine. 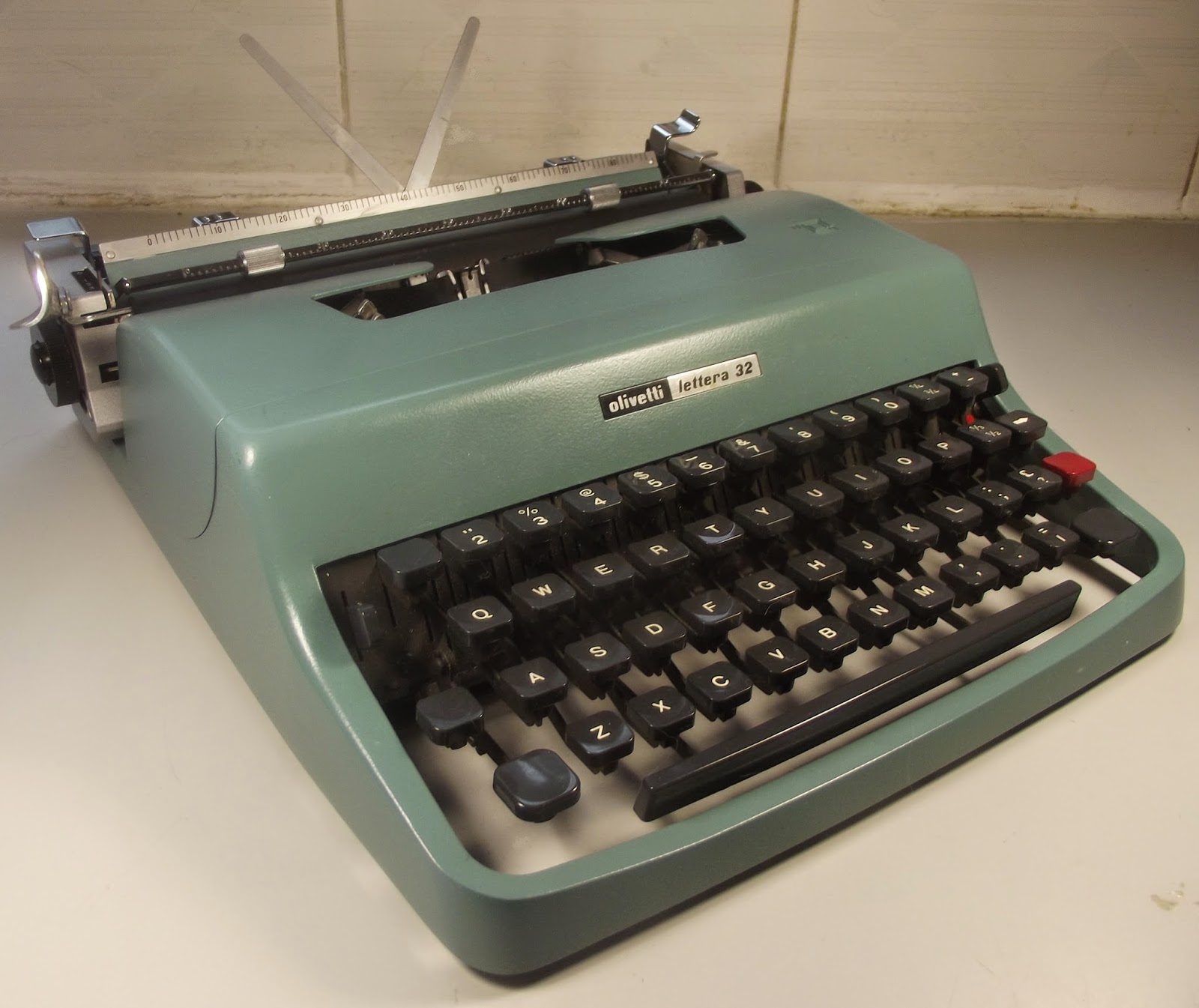 For weeks Peter and I tossed around what would qualify as "suitable". I had I mind an Olympia SM9 (Paul Auster's name was bandied about) or an Erika, the same model as the one our leading poet David Malouf uses. But as the birthday began to approach, I acquired a spare Olivetti Lettera 32, and had the thought that Michael might find getting back on the bike easier with something smaller and simpler, something that would quickly restore his confidence in riding a typewriter.
Since Auster and Malouf had previously come up in conversation, I thought I'd better throw in a few Lettera 32 users too: Robert Hughes, Will Self, Thomas Pynchon, Philip Roth, Ian McEwan, Martin Amis, John Cheever, Francis Ford Coppola, James Herriot ... and then I was reminded of Cormac McCarthy and his battered $254,000 OL32. 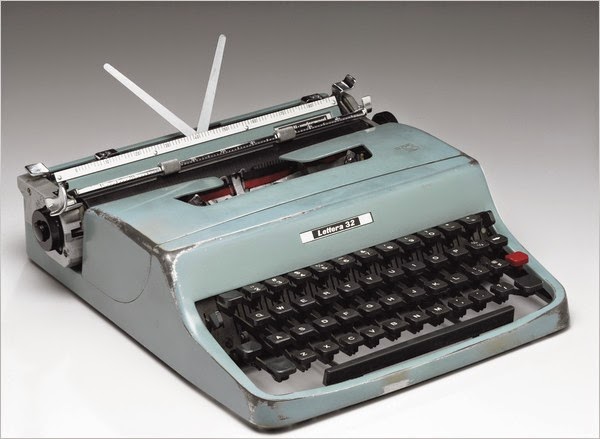 Cormac McCarthy's Olivetti Underwood Lettera 32. That it is branded an Olivetti Underwood, not an Olivetti, can clearly be seen on the paper plate.
What brought the McCarthy portable back to mind was an article in the arts section of The Australian on Saturday in which a grossly misinformed Sydney literary editor, Stephen Romei, wrote about "David Vann’s way with words, writers’ typewriters and [the] Stella Prize". 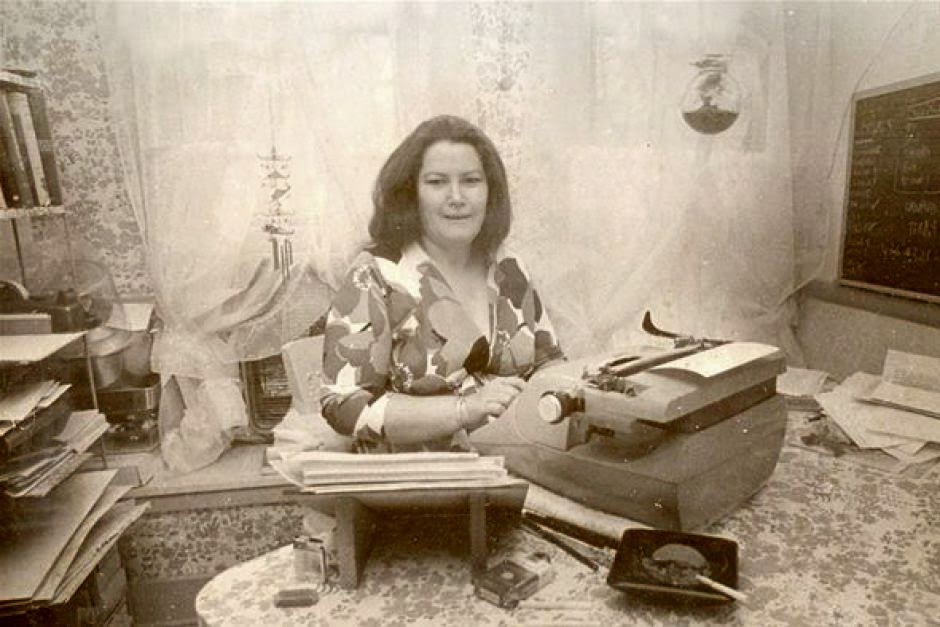 Romei wrote, "When Colleen McCullough died in late January, one of the small, fine details of the writer’s remembered life came from HarperCollins publishing director Shona Martyn. 'We looked forward to ... the arrival of each new manuscript delivered in hard copy in custom-made maroon manuscript boxes inscribed with her name.'’ One McCullough legend is that she went into town one day to buy a new overcoat, spotted a Blue Bird portable typewriter and on impulse spent her five quid on that instead.
"This came to mind as I was browsing Writers’ Typewriters, a charming little book by Sydney book designer, illustrator and writer Zoe Sadokierski. It features 44 writers and their typewriters: on one page is a drawing of the machine in question, on the other a little story, usually with a quote from the typist. Here’s Raymond Chandler, who used an Underwood Noiseless: 'Throw up into your typewriter every morning. Clean up every noon.' I find it interesting that while some writers have intimate relationships with their typewriters (Paul Auster says of his Olympia SM9: 'I have trouble thinking of my typewriter as an it. Slowly but surely, the it has turned into a him.'), others are more ambivalent (T.S. Eliot, a Smith Corona man, observes: 'The typewriter makes for lucidity, but I am not sure that it encourages subtlety.'’) Australia has two representatives, Patrick White and David Malouf, and the latter is typically lovely. Recalling that the cost of two new ribbons for his Erika was $5, he adds: 'I couldn’t believe something so precious could be so cheap.' 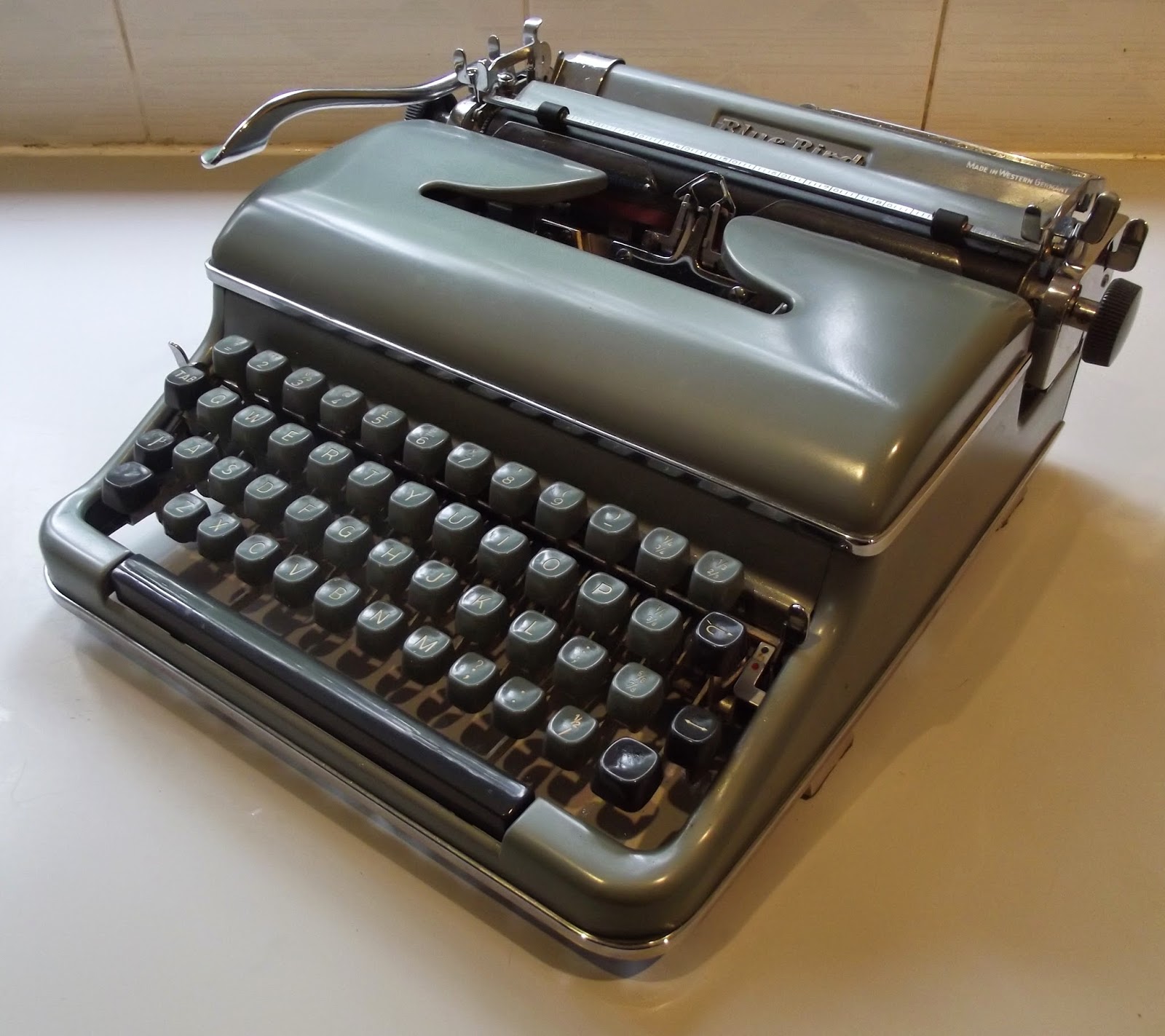 "Who knows what McCullough’s Blue Bird portable would be worth now? As Sadokierski informs us, Cormac McCarthy bought his Olivetti Lettera from a Tennessee pawnbroker for $US50 in 1963. In 2009, post The Road, he sold it at auction for $US254,00, donating the proceeds to scientific research."
Thus the furphy gets repeated and compounded and gains further unwarranted currency. Sadokierski didn't check her facts, Romei simply assumed she had and duplicated her incorrect statement ... and on and on this false story goes. "Sadokierski informs us" wrongly.
How much of what is written about typewriters today is misguided, and based on falsehoods and misconceptions?
Judging by what I've seen of a typewriter book to be published in Britain later this year (not the well-researched and well-written The Typewriter Revolution, which is to be published in the US in November), the answer to this question is: An awful lot of it, if not most. Sadokierski's book is just another example of a typewriter tome being written without the necessary original research work being put into it. I gather the authors of the British book don't know the difference between a platen from a typebasket.
Cormac McCarthy could NOT have bought an Olivetti Lettera 32 second-hand in Knoxville, Tennessee, in 1963. Why? For the very simple reason that no one could have bought a brand new Olivetti Lettera 32 anywhere in Tennessee, or anywhere else for that matter, for any amount of money in 1963, let alone a second-hand one.
The Olivetti Lettera 32 did not go on sale in the US until mid-April 1964. And even then the Lettera 22 was still being sold brand new. These adverts introduced the new model between May and December 1964. A brand new Lettera 32 was a standard $74.50 plus federal taxes right across the country during this period, but a trade-in could drop the price to $49.50 plus taxes. The Lettera 22 was being sold brand new for $68 at Christmas 1963. 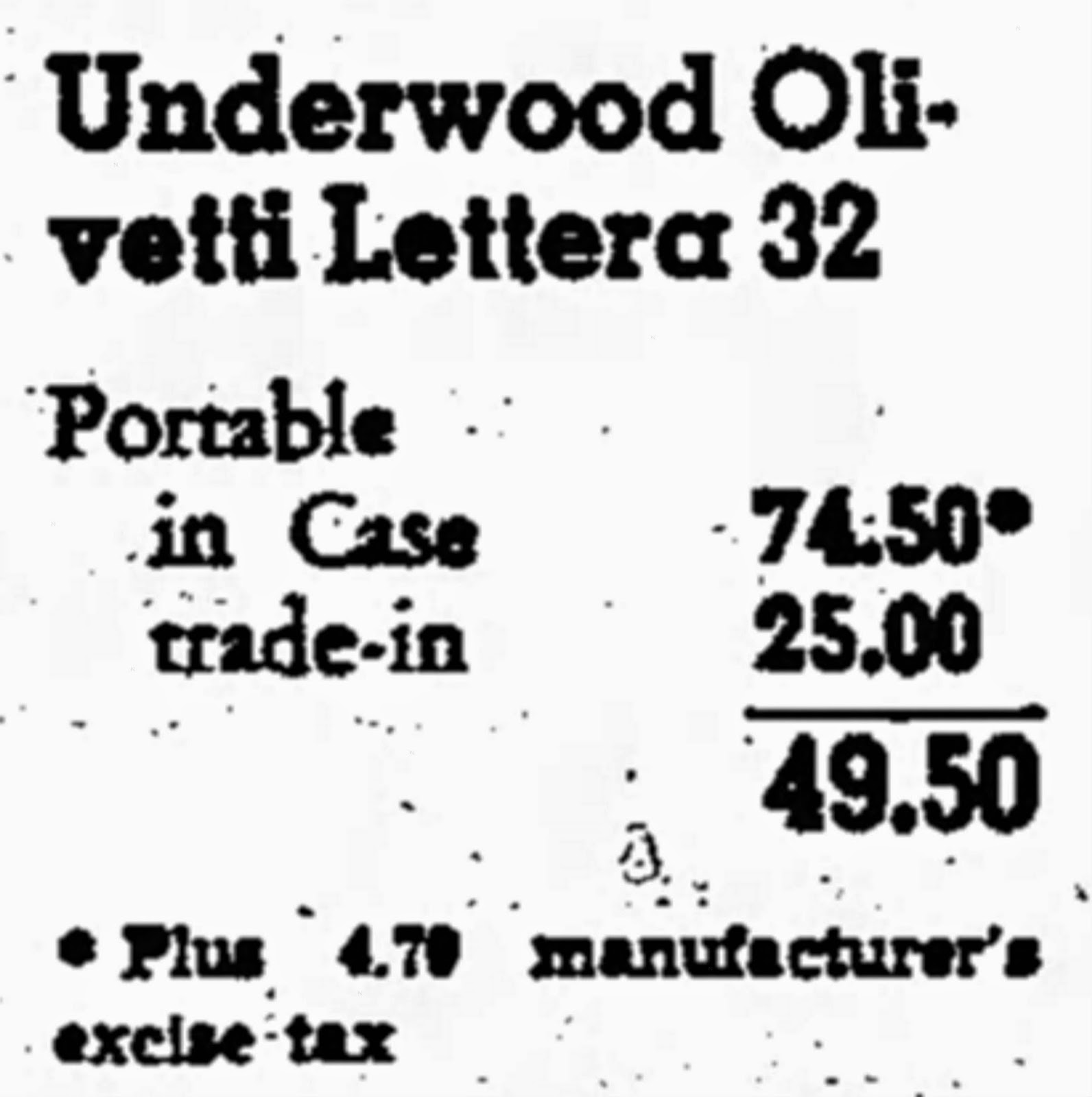 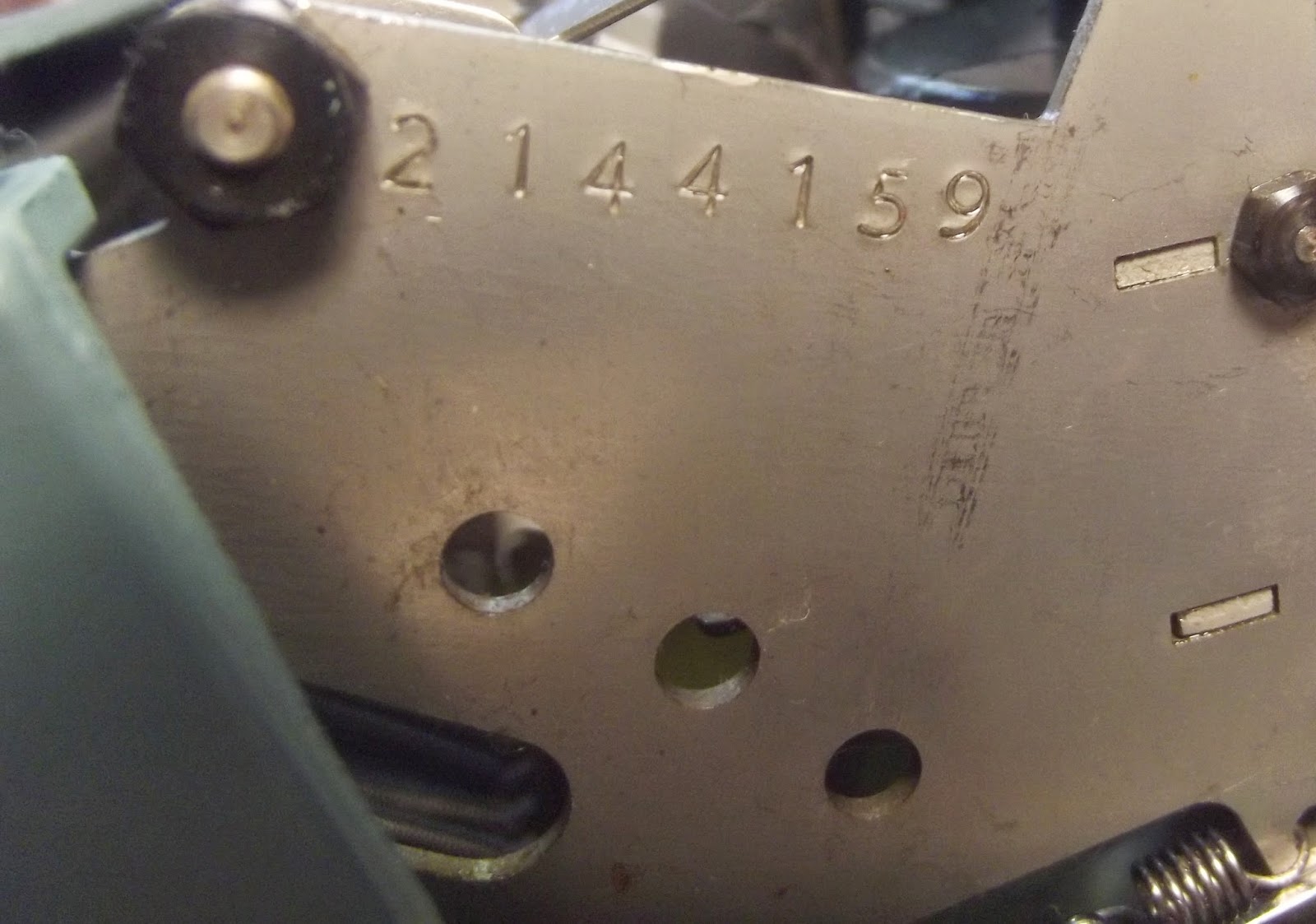 My Lettera 32, bought a long way from Knoxville, Tennessee, and a long time after autumn 1963. 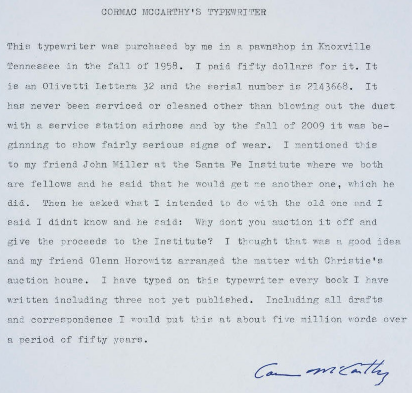 McCarthy later revised the year of purchase from 1958 to “a few years later”. At the time of the sale, it was claimed the typewriter had been bought in 1963.
'This typewriter was purchased by me in a pawnshop in Knoxville Tennessee in the fall of 1958. I paid fifty dollars for it. It is an Olivetti Lettera 32 and the serial number is 2143668. It has never been serviced or cleaned other than blowing out the dirt with a service station airhose and by the fall of 2009 it was beginning to show fairly serious signs of wear. I mentioned this to my friend John Miller at the Santa Fe Institute where we both are fellows and he said that he would get me another one, which he did. Then he asked what I intended to do with the old one and I said I don’t know and he said: Why don’t you auction it off and give the proceeds to the Institute? I thought that was a good idea and my friend Glenn Horowitz arranged the matter with Christie’s auction house. I have typed on this typewriter every book I have written including three not yet published. Including all drafts and correspondence I would put this at about five million words over a period of fifty years.'
An official history of British Olivetti Ltd confirms that the Lettera 32 was introduced “in the (northern hemisphere) summer of 1964", that is sometime between June and August, "following its successful launch in Italy at the end of the previous year. It was designed to meet the needs of the fast typing journalists and plodding schoolgirls. This mass-seller was priced [in Britain] at £27 10s 0d."
It would seem far more likely that McCarthy bought his Lettera 32 in the first half of 1965 - not the fall of 1963 - which would explain why its serial number is far closer to the one on my Lettera 32. He must have bought it in the US, as it is labelled an "Olivetti Underwood", not an "Olivetti".
During that summer of 1965, McCarthy, using a travelling fellowship award from the American Academy of Arts and Letters, left the US on the liner Sylvania, headed for Ireland. He had previously used a Royal portable, but before crossing the Atlantic had "I tried to find the smallest, lightest typewriter ..." 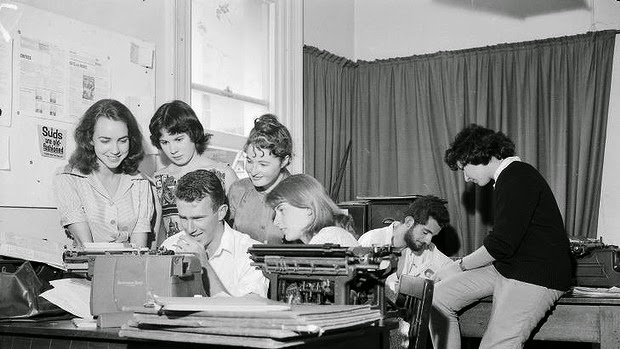 Clive James typing on a Remington as art students the Orientation Week issue of Honi Soit at the University of Sydney in February 1960.
I thought again of McCarthy's unreliable memories when I read in The Sydney Morning Herald on Saturday that P.J. O'Rourke has written a new introduction to Clive James' Unreliable Memoirs. 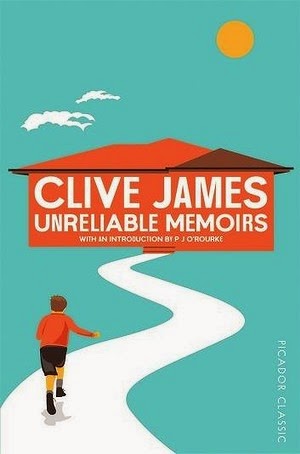 O'Rourke wrote, "What accounts for Unreliable Memoirs being the best memoir in the world? And by that I mean no backhand compliment. The memoir genre has suffered an over-grown pullulating decadence of bloom in the 35 years since Clive's work was published. One need only be bitten by a shark or fondled by a step dad to unload one's history upon the reading public. Nowadays to say 'best memoir in the world' is almost to say 'best fart in an elevator'. But do not blame Clive. His book trails none of the stink of the up-to-date memoir. Especially it has no funk of message - no fetor of 'setting goals', no reek of 'courageous persistence', no effluvium of 'self-acceptance', and none of the fetid compost-heap putrescence of 'finding my inner me'. Nor does Clive ever fall back upon that most pathetic trope of storytellers,   'And it really happened'. On the contrary Clive starts his preface to Unreliable Memoirs by saying, 'Most first novels are disguised autobiographies. This autobiography is a disguised novel.' Thus Clive becomes, so far as I know, the first honest memoirist. And, so far as I see, the last."
Oh, if only writers of typewriter books (other than Richard Polt, of course), and sellers of expensive typewriters, were as honest as Clive James. Wouldn't it be wonderful if they started doing their own real research, and stopped relying on the memories of others and previously published stories for what they write? Instead, what are purporting to be typewriter books these days are just farts in elevators. That is, putrid.
Posted by Robert Messenger at 13:38

Interesting correction of history here Robert. What you point out is why eye witness accounts are seldom accurate. As humans we tend to want to make things as we think they should appear.

You can see the typewriter itself on youtube: https://www.youtube.com/watch?v=Rjp6PetgUlQ at minute 4:31

This typewriter should practically not exist, is that right?

If you want a picture of the serial number, I can send it via email.

Just checked the serial on my lettera 32 and its 1609030. Not sure how significant that is but thought I’d share since you mentioned your serial is the lowest you’ve found yet.