Let the clean-up begin! Still on Day One, I took a bit of a break. I find this is always a good idea while restoring typewriters, as it helps to clear the mind. And there's nothing better to clear the mind than mindlessly watching TV. So I caught an afternoon program on SBS called Leonardo Da Vinci: The Restoration Of The Century (after all, it is Easter). It was about the restoration of Leonardo's final masterpiece, The Virgin and Child with Saint Anne, completed in the Louvre three years ago. In the process of watching the show, I learned a new word: reintegration . The Louvre restorers seemed to prefer it to "restoration". In large part, it seemed to refer to clean-up and touch-up. It actually means "To restore to a condition of integration or unity." And I thought, gee, this also describes much better what we do to old typewriters. A 61-year-old Smith-Corona typewriter is hardly a 512-year-old Da Vinci masterpiece of course, and this is far from being the "restoration of the century". But hey, it's the best I've got, at least for the time being! 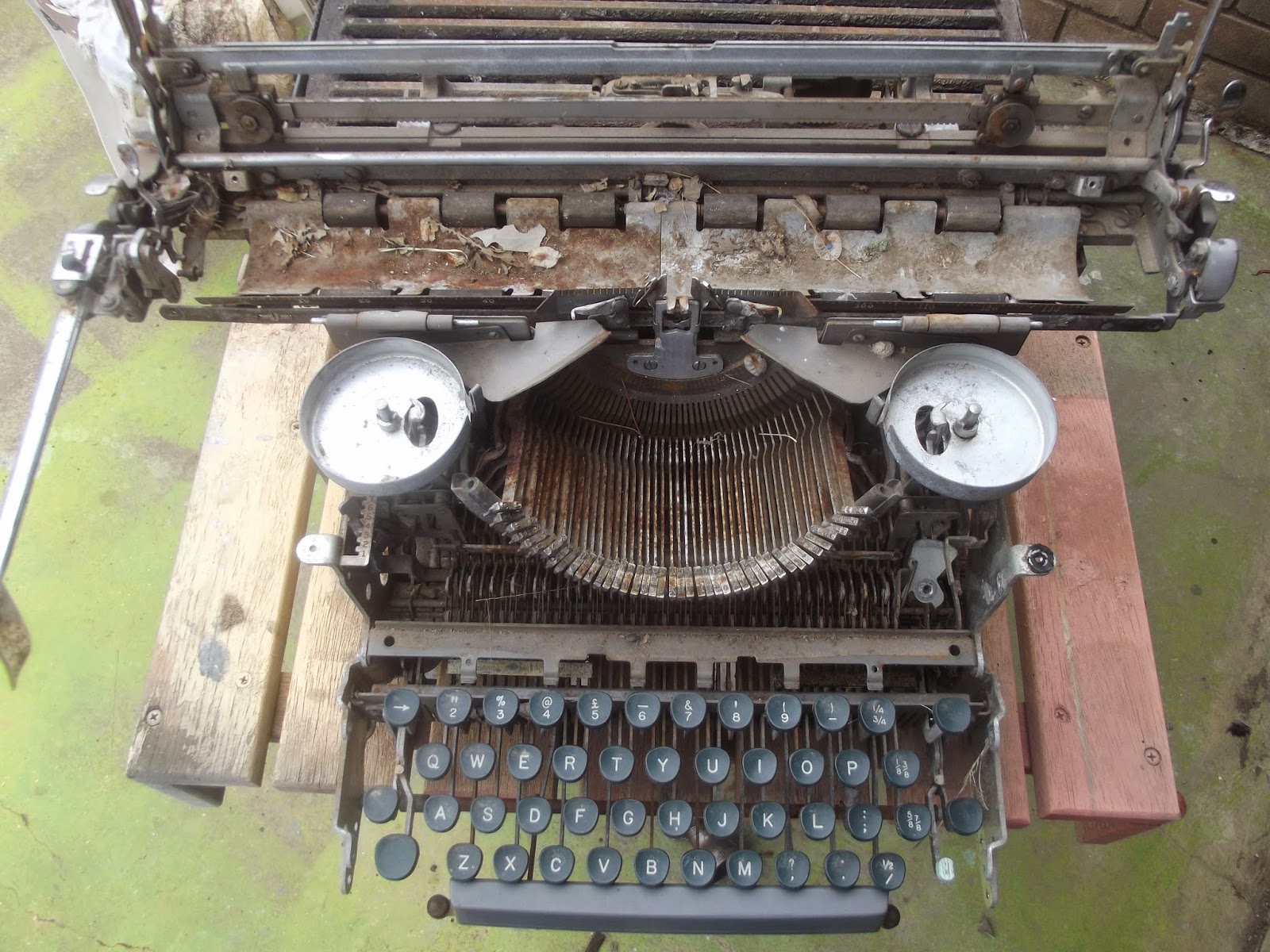 Having taken as many parts off the typewriter as I could, or needed (wanted) to, I took the machine outside to put the air compressor through it and clear out any loose matter. Having an air compressor is, I think, vital to any such operation, when dealing with a machine such as this, filled with so many linkages, levers, dogs and racks and whatever. 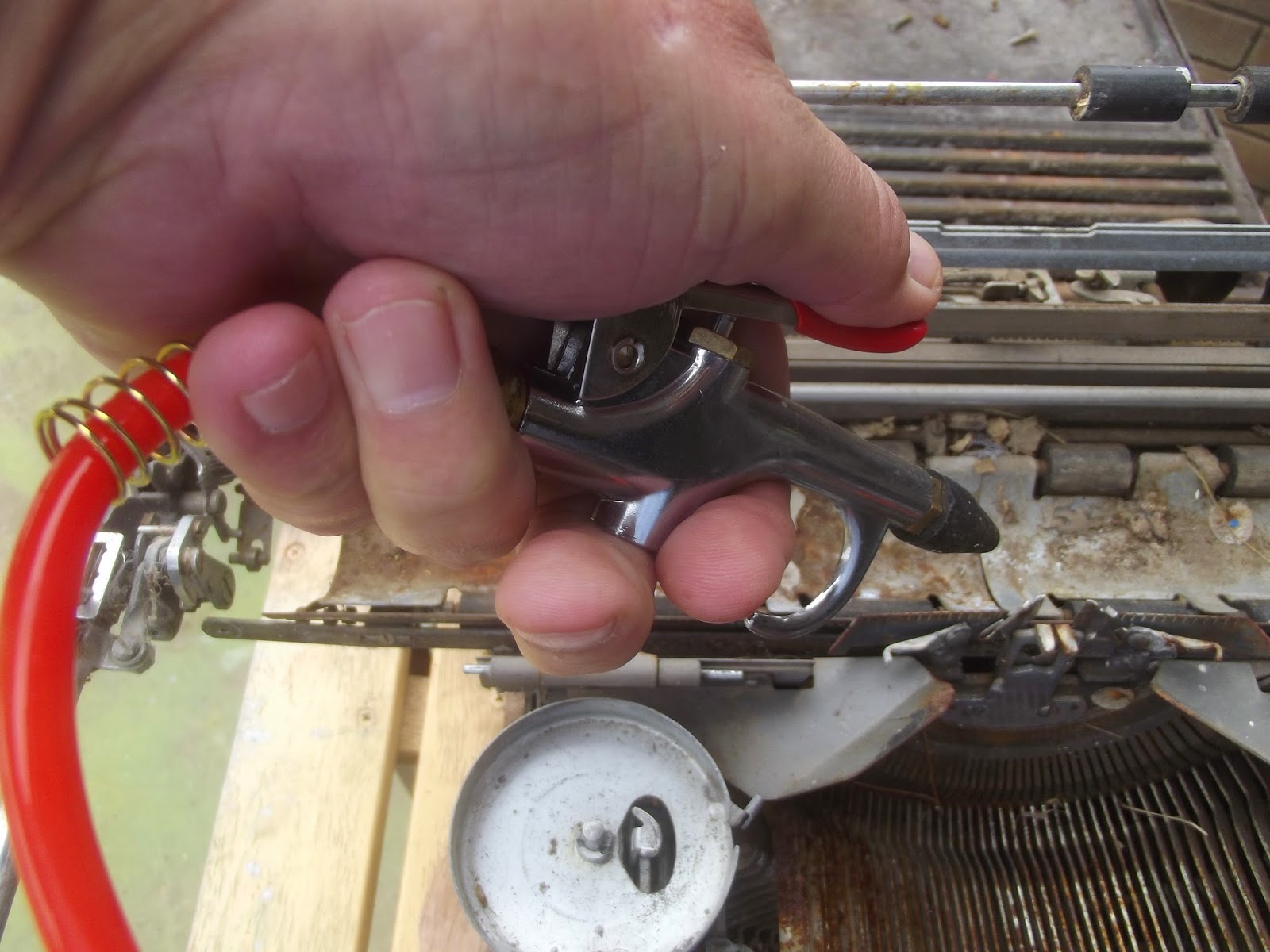 Having cleared out the loose matter, I attacked the surface rust, first using an aerosol can paint remover to loosen the rust. I find this handy, as with a long nozzle attachment, it enables me to direct the spray to specific areas and avoid contact with rubber etc. There is a rust remover in a hand-pump spray container, but the spray tends to go all over and leaves a white film which is hard to clear off. 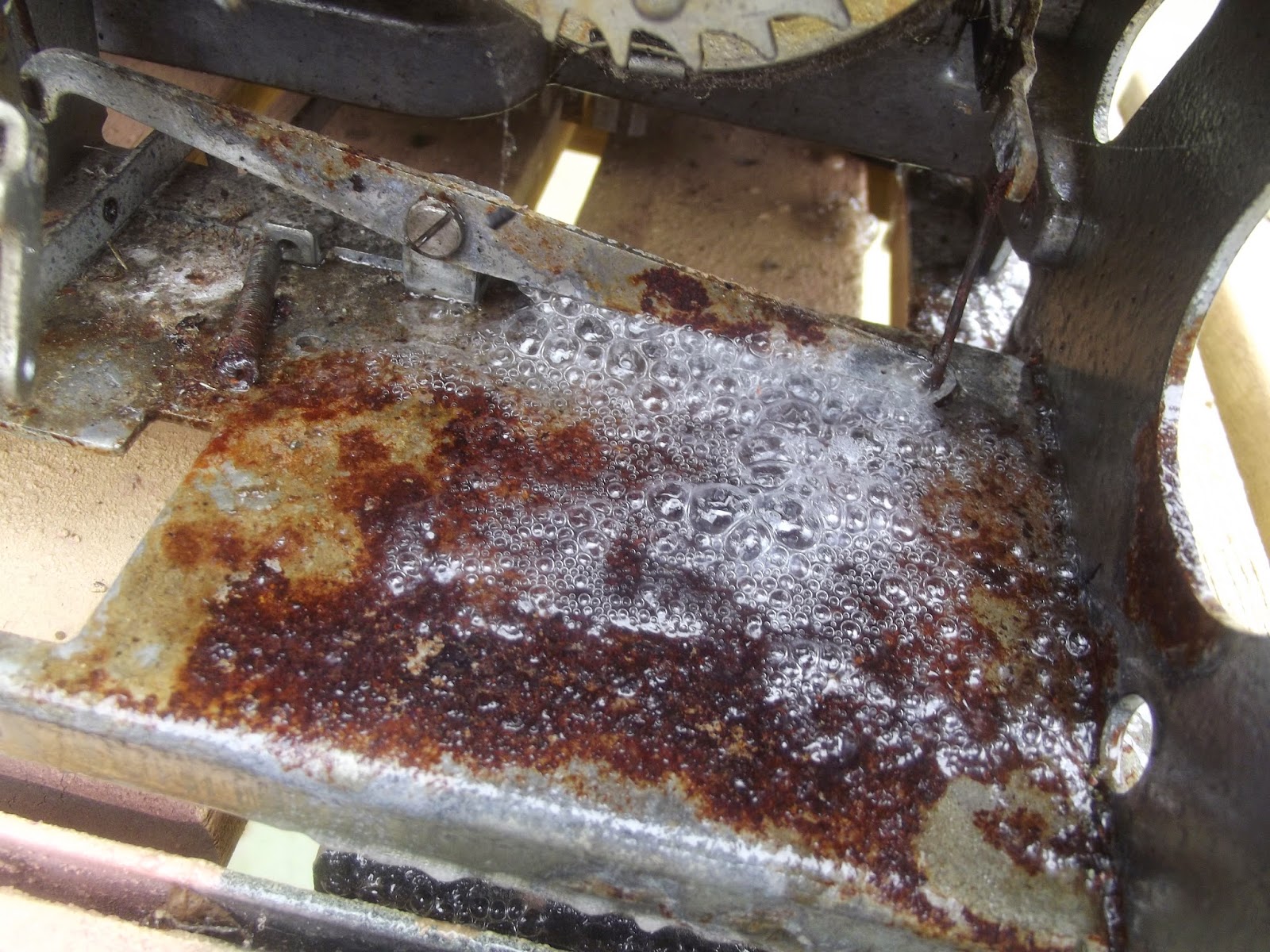 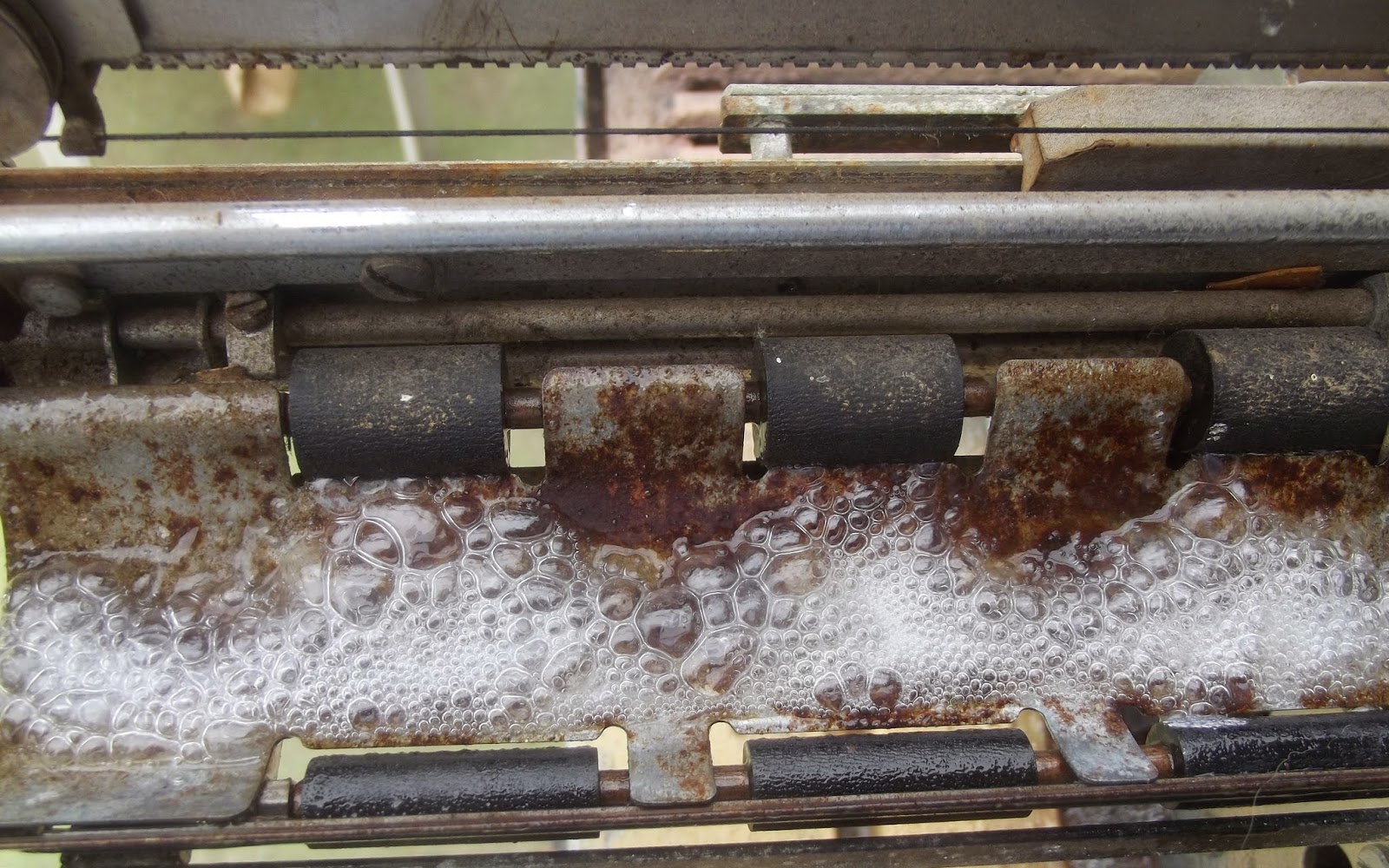 I didn't need to leave the paint remover to work for too long before using a wire brush attachment on an electric drill to clear off all the surface rust. Pretty soon you start to see a vast improvement, enough to keep one's confidence high at the end of one afternoon's work: 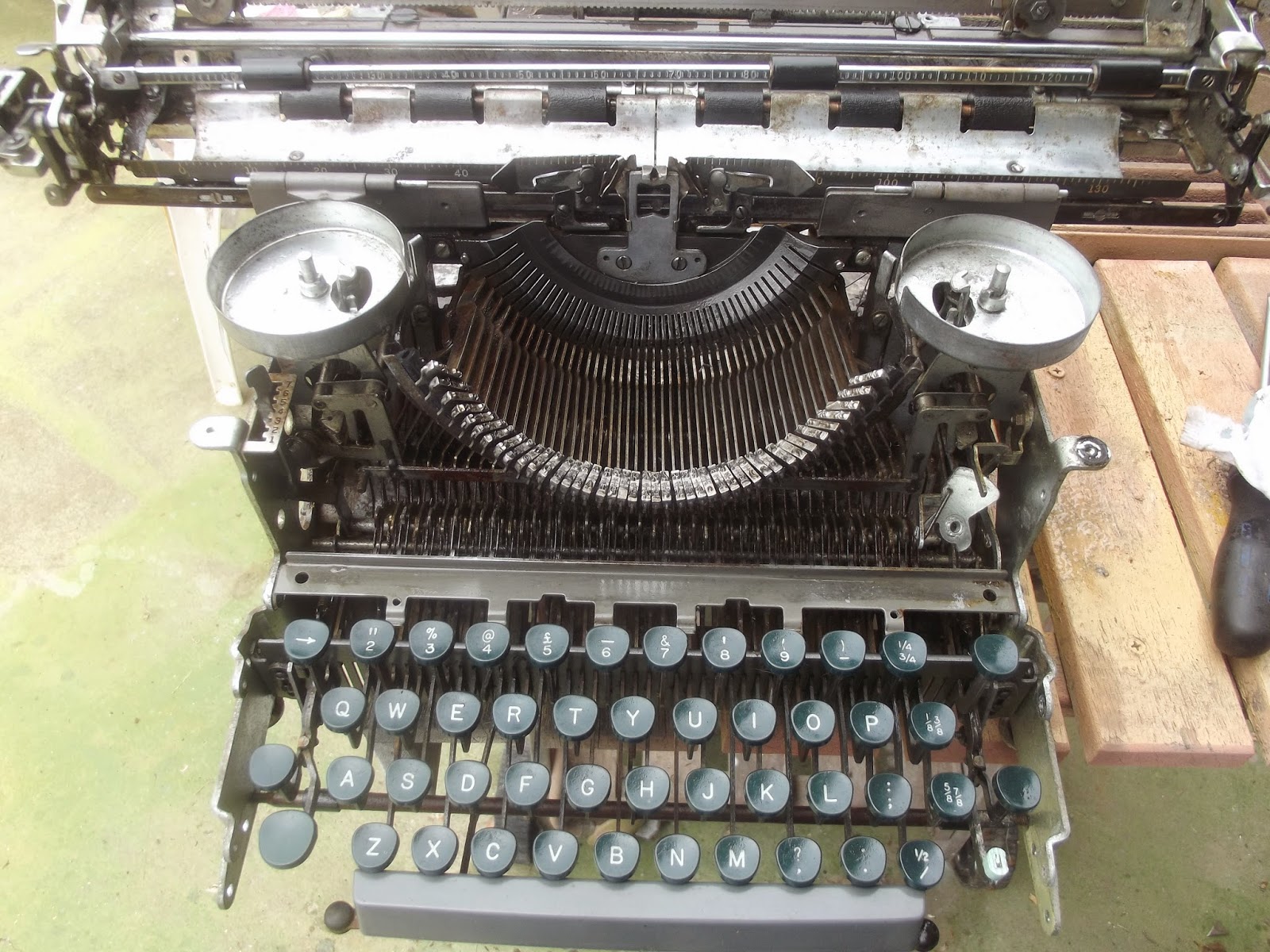 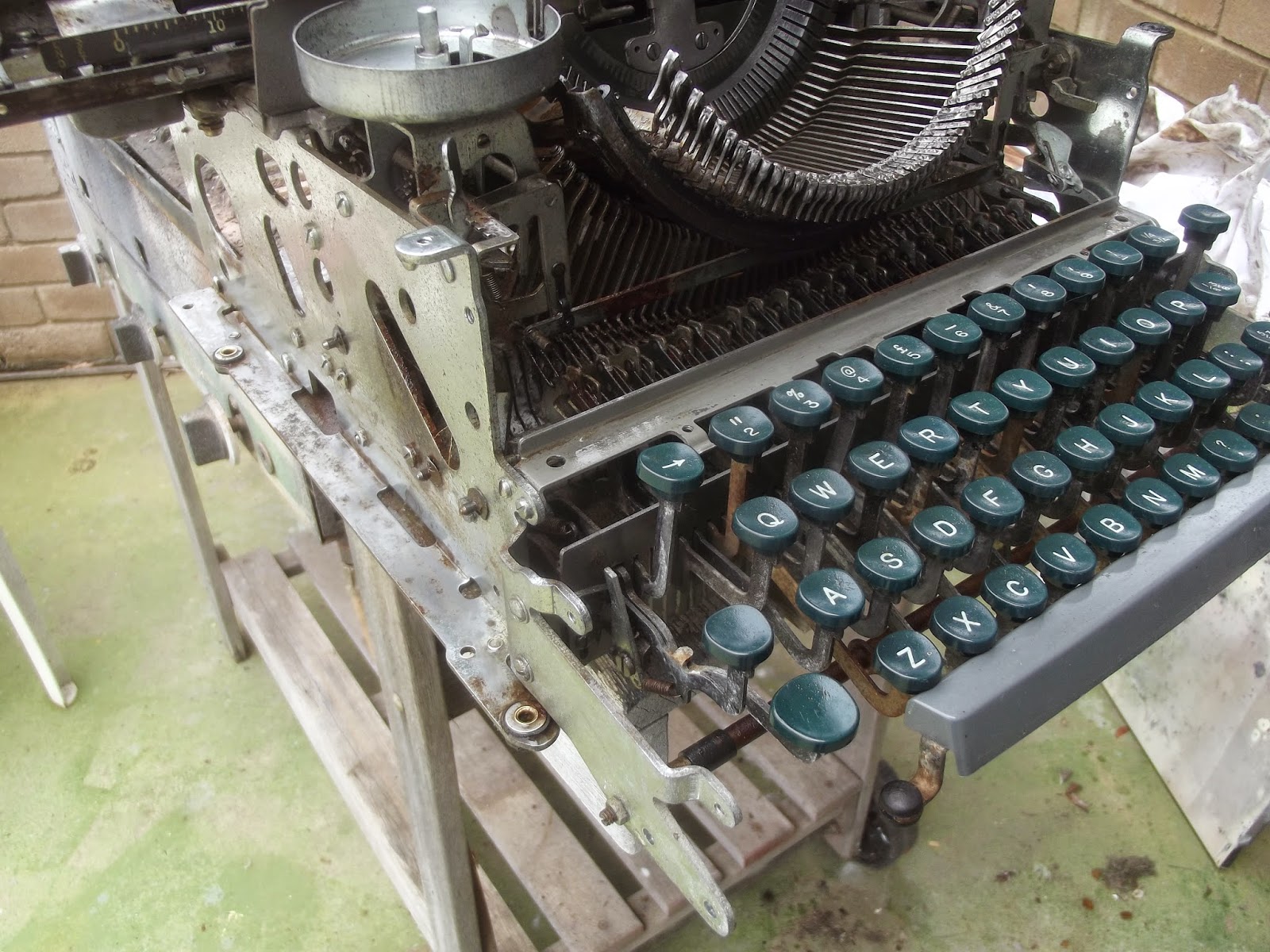 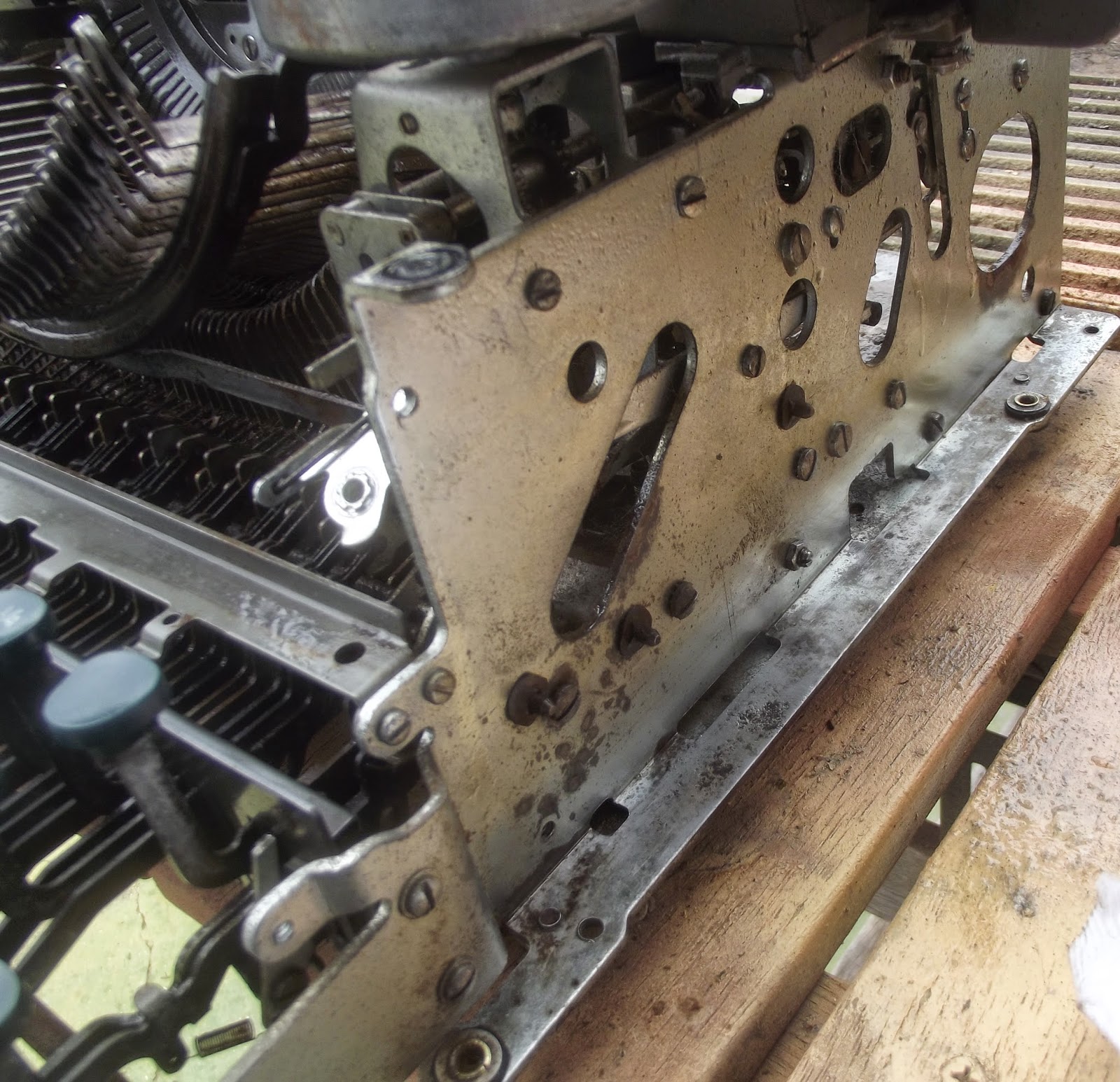 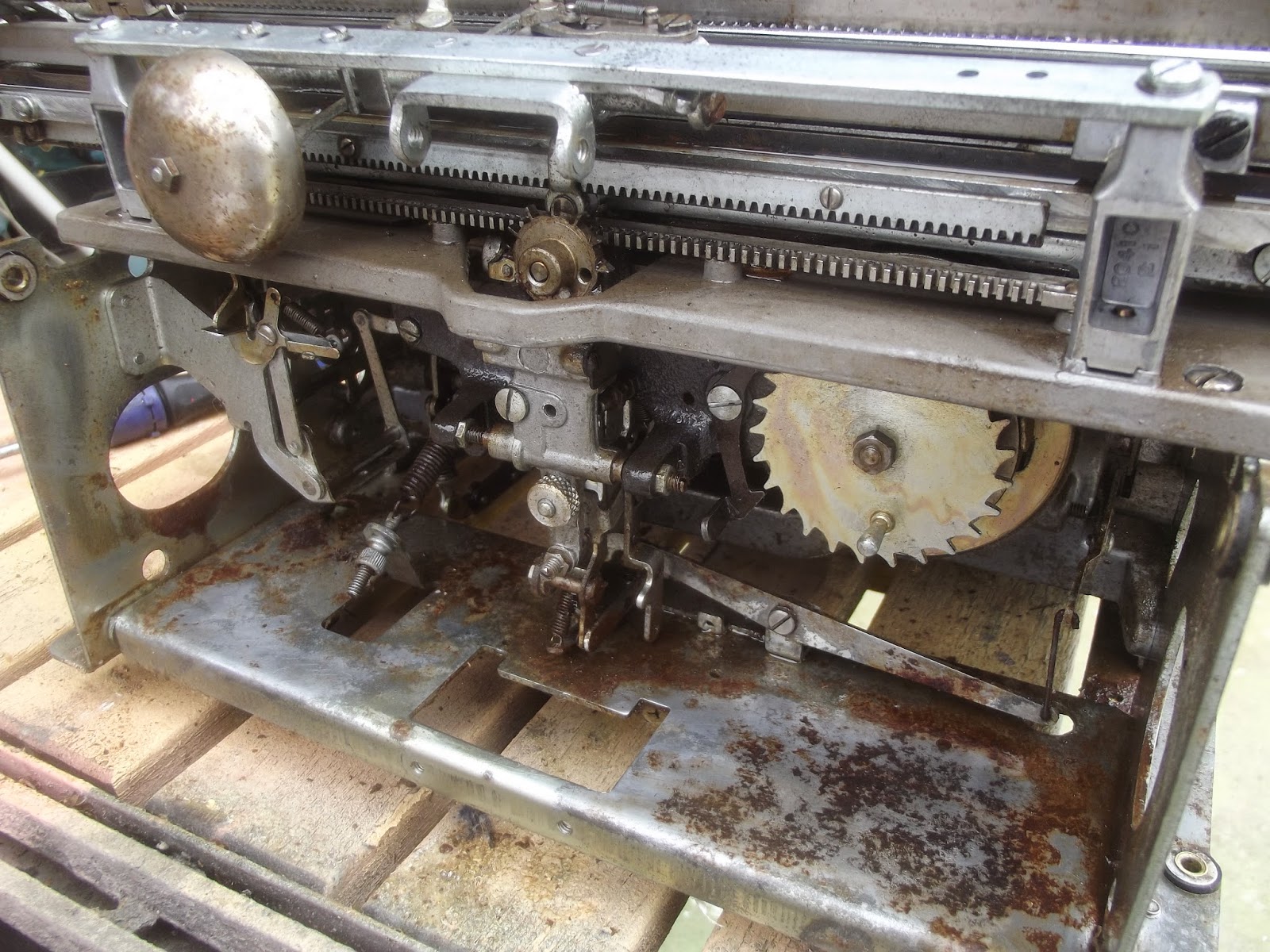 At the start of Day Two, I gave the machine a foam bath using a foam degreaser, making sure to protect the keytops from losing their sheen on being subjected to the strong solvent agent in the degreaser: 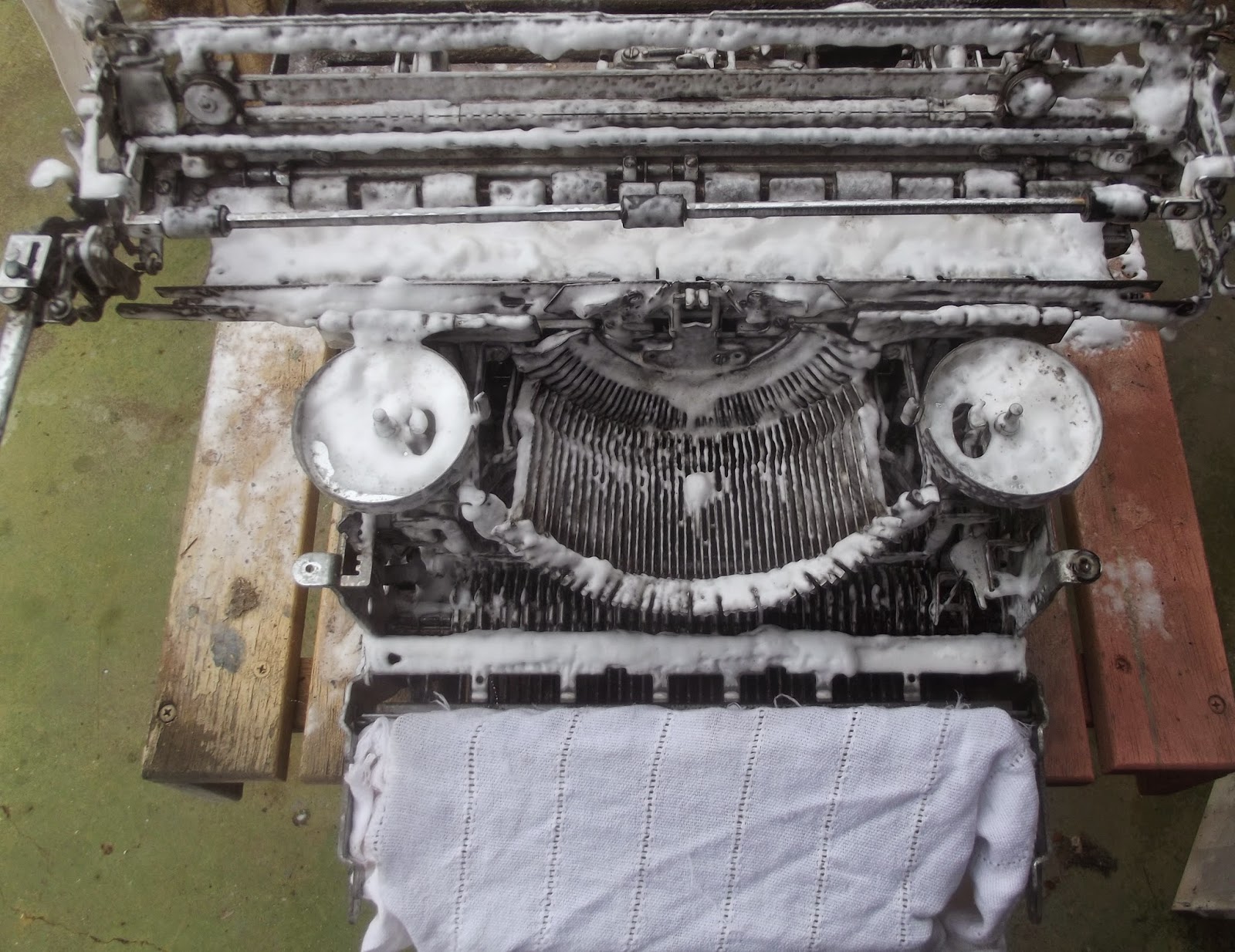 At this point I need to use the air compressor once again, obviously, and then start to work on cleaning up and ungunking specific areas, such as the linkages, both front and back under the typebasket, the typebars themselves, as well as the gunked up racks and rods at the back of the typewriter. To give a idea of the stuff I use, below are some of the cans and containers. The dry lubricant is handy as it contains Teflon as well as silicon and avoids dripping. The Penetrol rust treatment aerosol can, with the long nozzle attachment, is really EXCELLENT for dealing with corrosion in linkages, the sides of typebars and other hard-to-get-at areas, in the rack and other parts of the carriage. But plan ahead to give it a full day to work properly. I also applied CLR with a wire brush to the linkages and typebars - surface rust had made them very stiff. 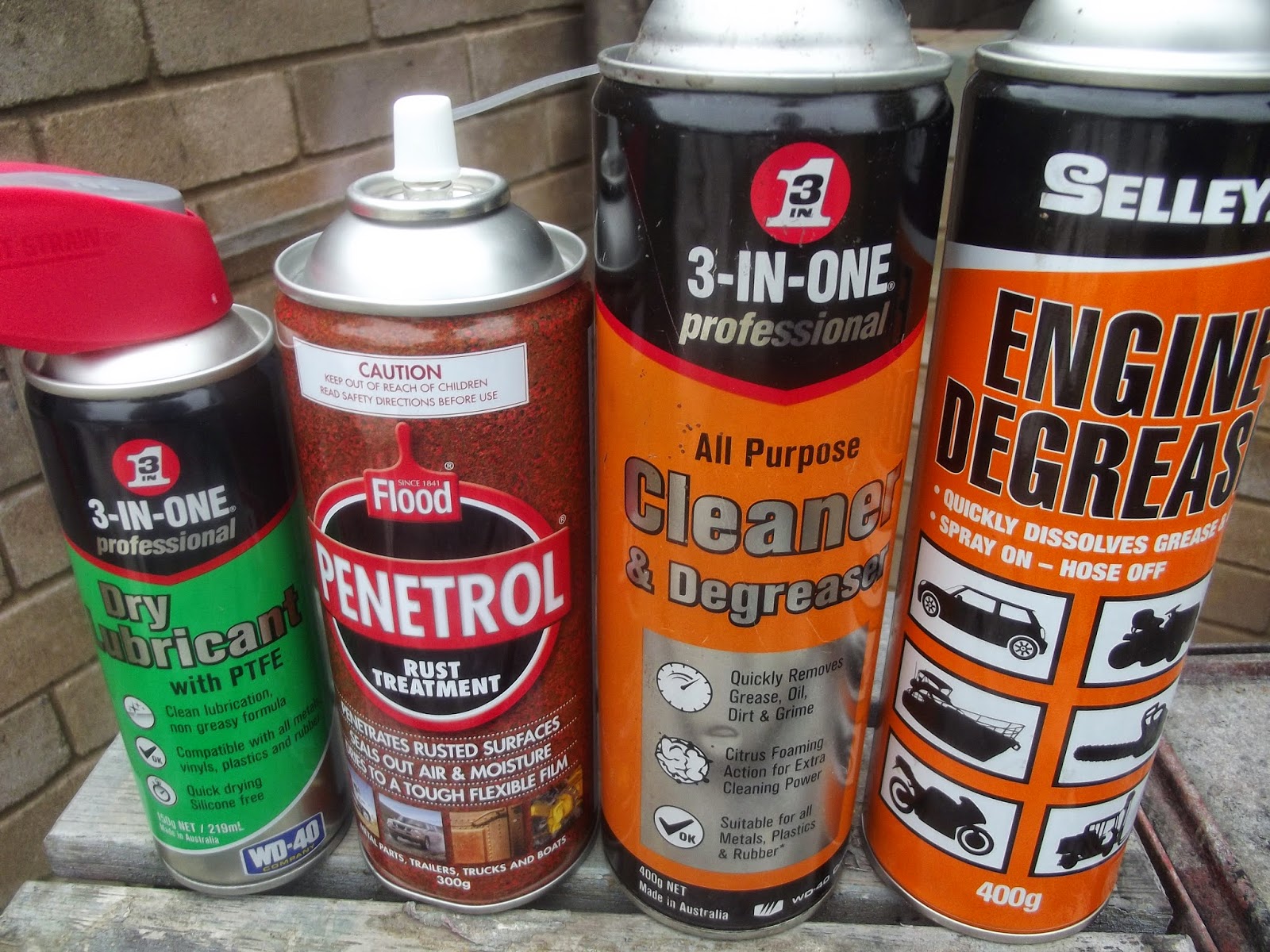 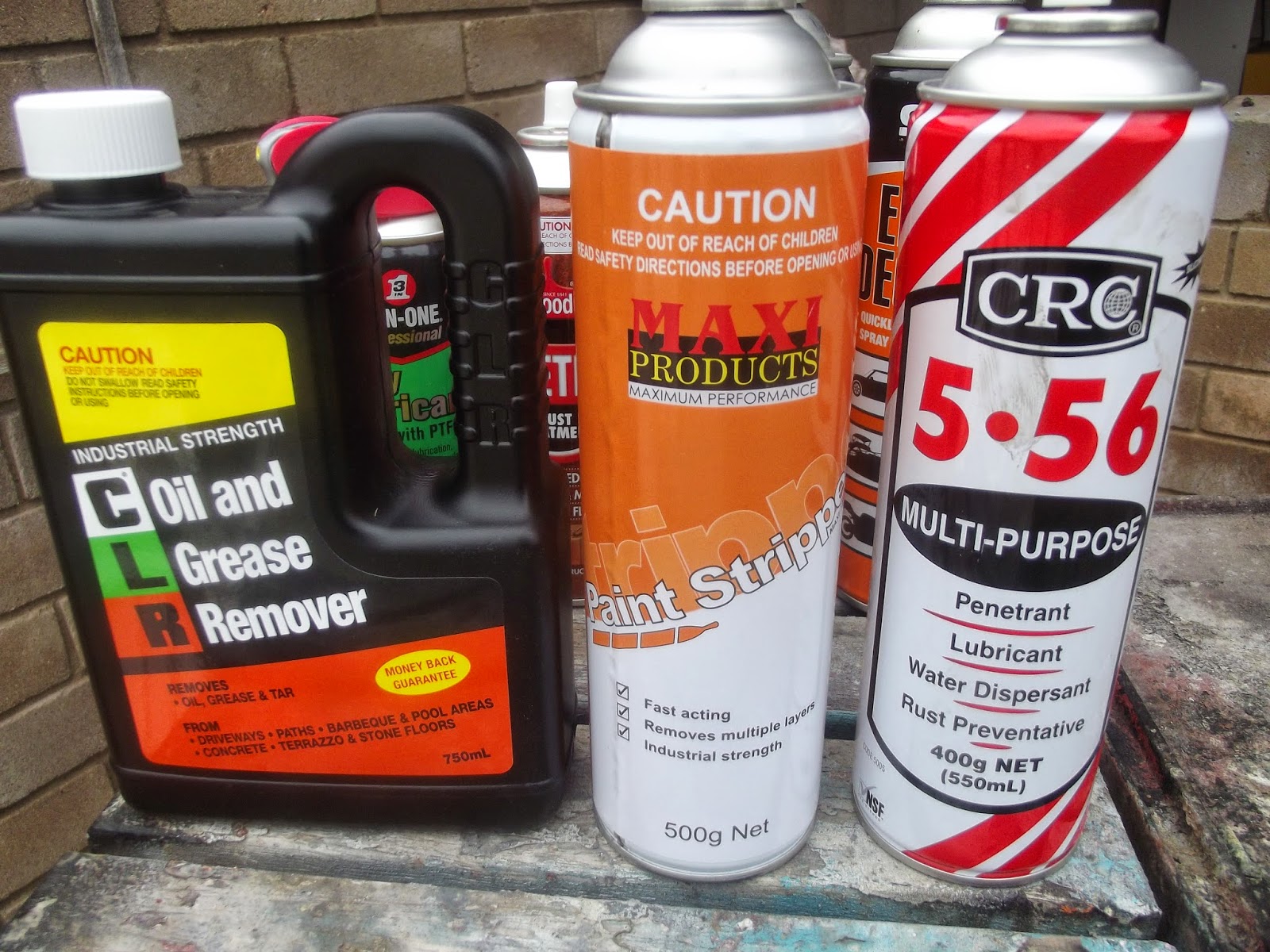 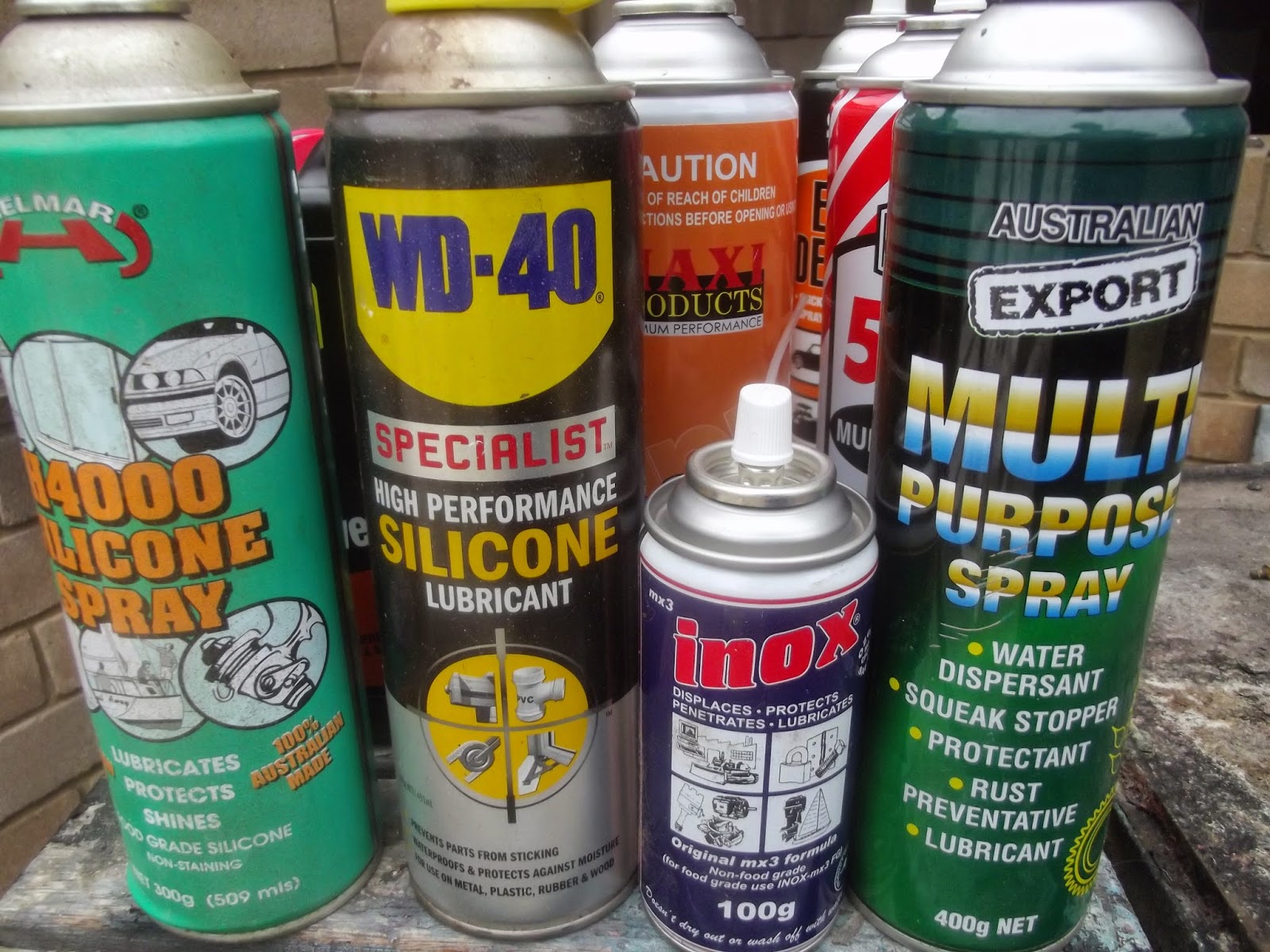 Meanwhile, the parts to be primed and repainted have been taken from the hot bubble bath, run over with a scourer and left to dry out (particularly the felt behind them): 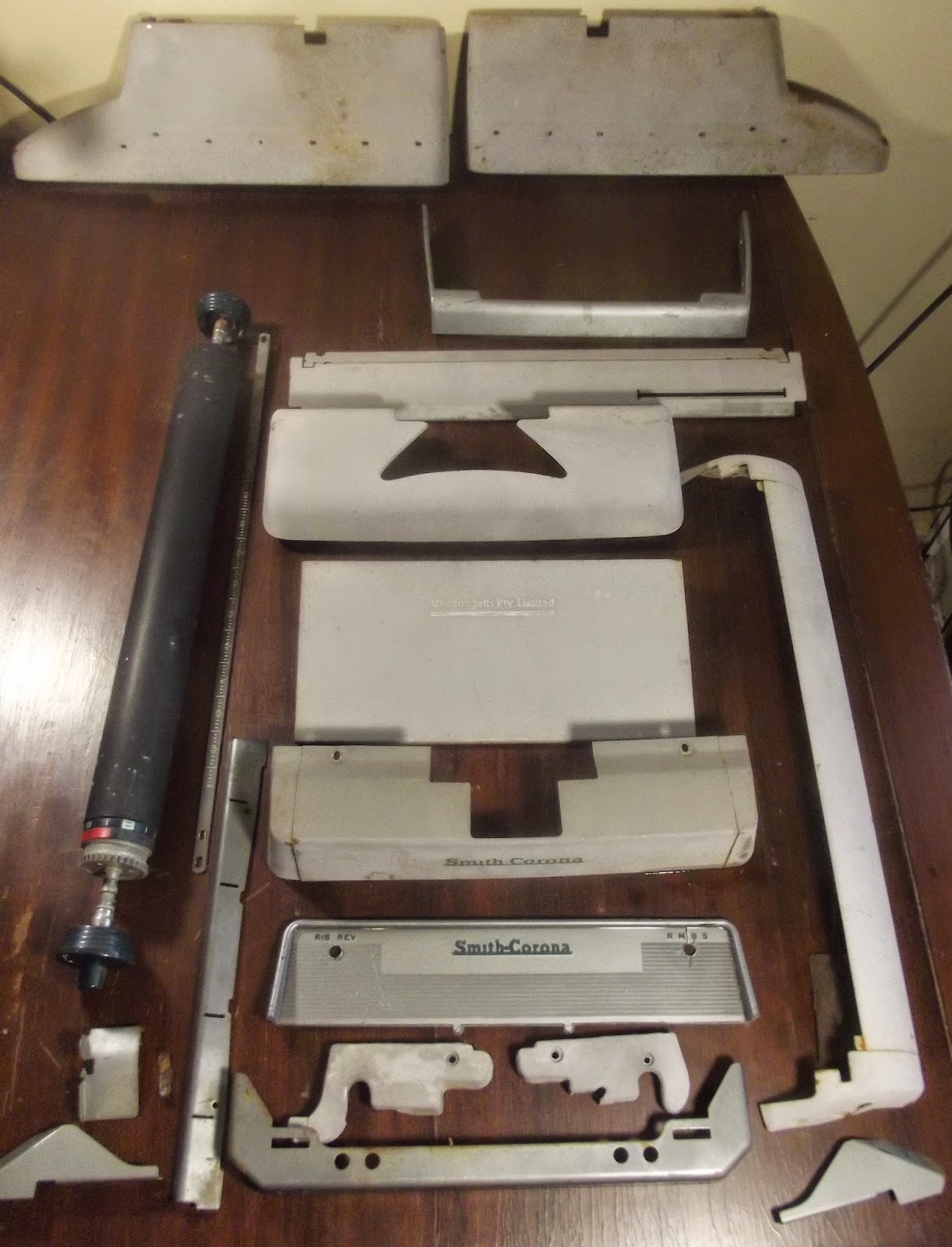 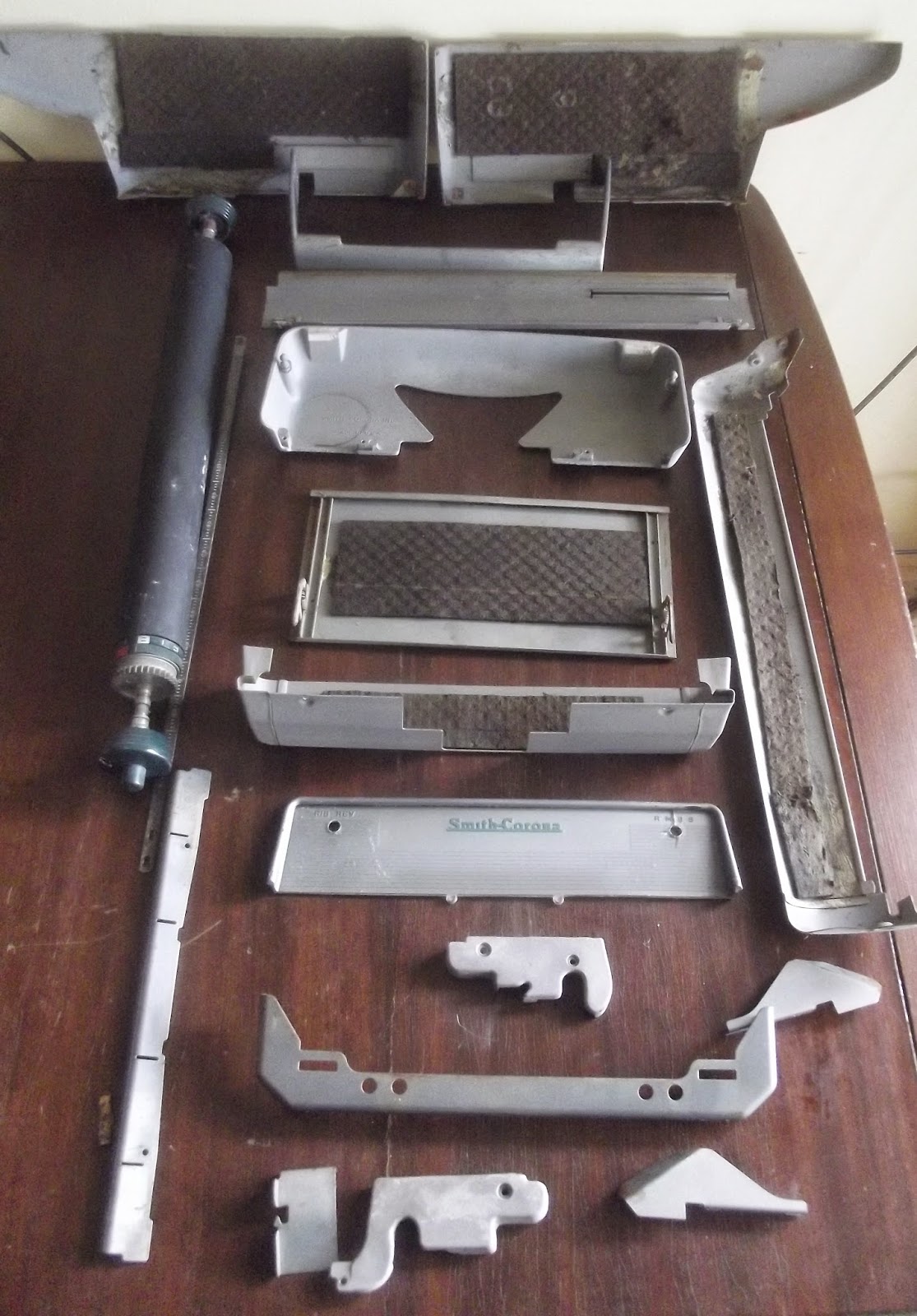 While these are drying, it is time to contemplate the colour I will use to repaint the machine. My first thought is something close to the original colour, and I am leaning toward a high gloss darker grey, similar to Richard Polt's Deluxe Secretarial (bottom), which I think tones in well with the shiny, darker grey trimming around the keyboard and the frontispiece. I don't have the silver trimming on the sides, as seen on Alan Seaver's Model 88 below (and absent from Michael Höhne's 88 below it, on which the keyboard-frontispiece trimming, as on mine, is a darker grey. On mine, the holes are there for the side trimming, but it has obviously been lost somewhere along the way.).
I am also considering other, non-original colours, such as cream or off-white (which always work well), a very pale blue (likewise), or maybe a pale lemon, fawn or green. Anyone with any colour suggestions, please let me know. 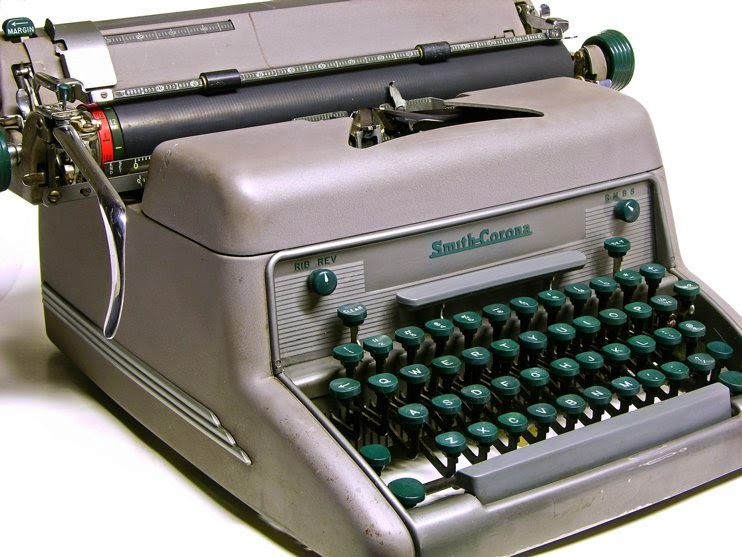 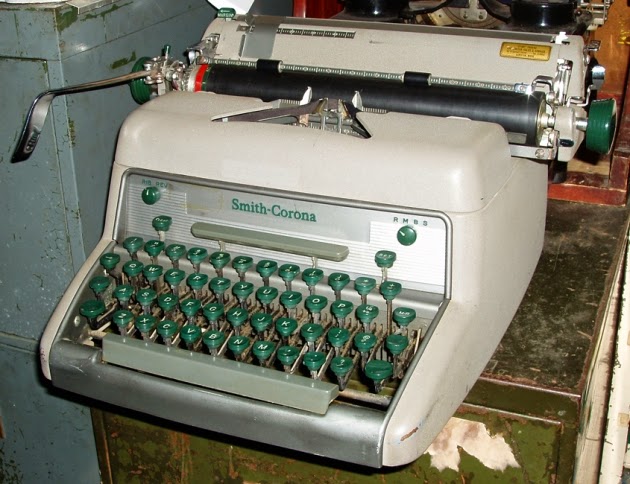 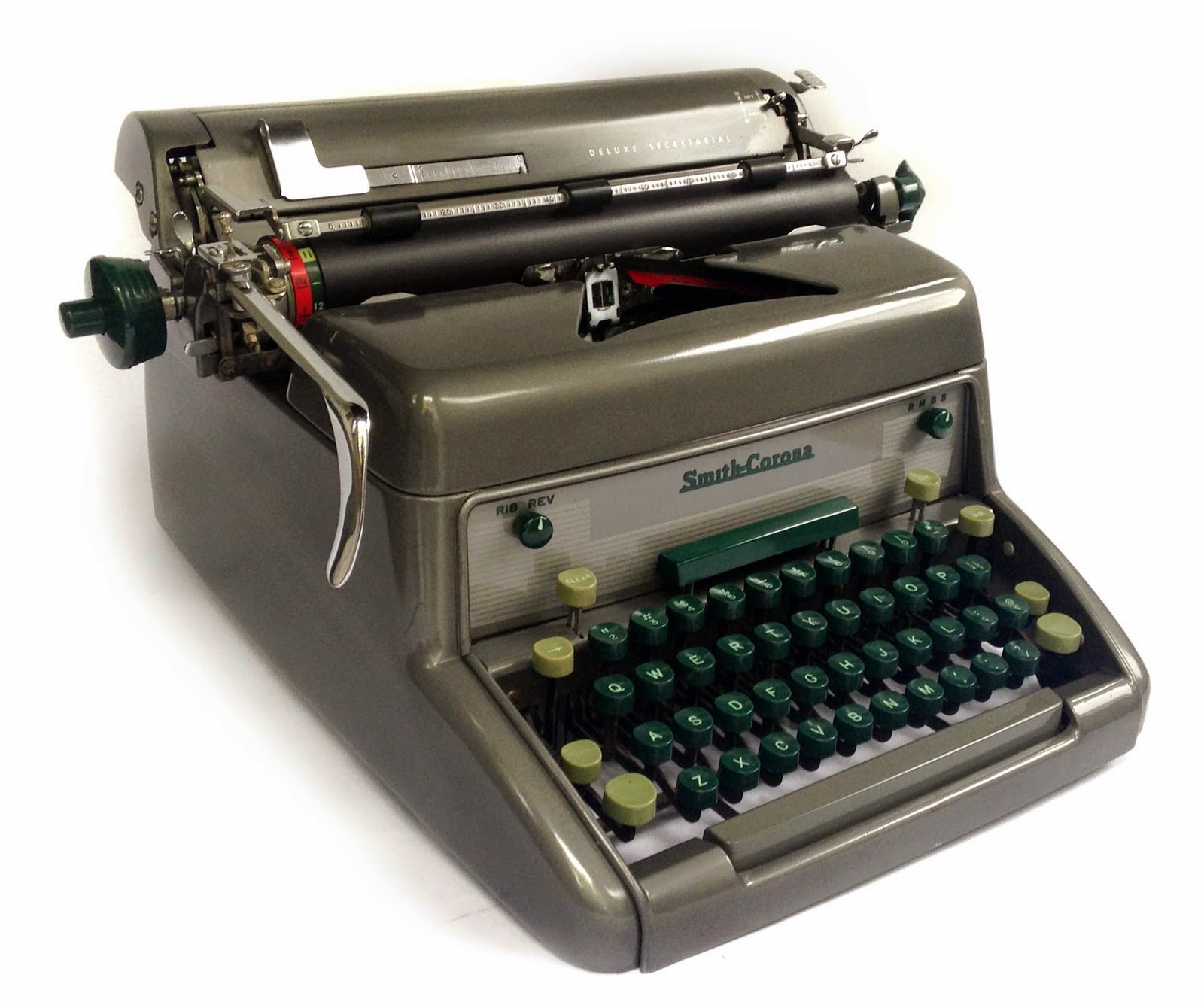 Next: As the warm weather returns on this long Easter weekend, and on my 67th birthday, let the painting begin!
Posted by Robert Messenger at 09:59

Definitely moving in the right direction. The Deluxe Secretarial does look very nice in glossy gray.

I just got a Royal 440 for $5 which is in horrid shape. Type bars froze. With rust. Thank you so much for doing this, as it will be a big help to me.

Happy birthday! That machine is looking much better already, I'm sure if it could talk it would be thanking you for taking the trouble of bringing it back to life.

I agree with Richard, the machine looks great in glossy gray.

I like the word "reintegration," by the way. We combat disintegration!

A Very Happy 67th Robert!
You sure are making great headway with the restoration. I see some of the same chemical arsenal I use. I've not see Penetrol though since moving to Florida.

I do not know what I'd do having typewriters and no air compressor. Even a small Chinese one is indespensible for cleaning a typewriter. I also use a pencil type of die grinder on my air compressor. They can run quite fast so I control mine with a regulator and flow valve so it is not to agressive on a typewriter. Saves on elbow grease when removing stubborn rust spots.

My paint vote goes along with Richard, glossy gray.

Grey is very nice, but just imagine a light green with that grey front piece and darker green keys. (:

Happy Birthday Robert!
It is great to see the process. I'm in the gloss grey camp......... quite striking.