Australian Museum's Typewriters On The Move 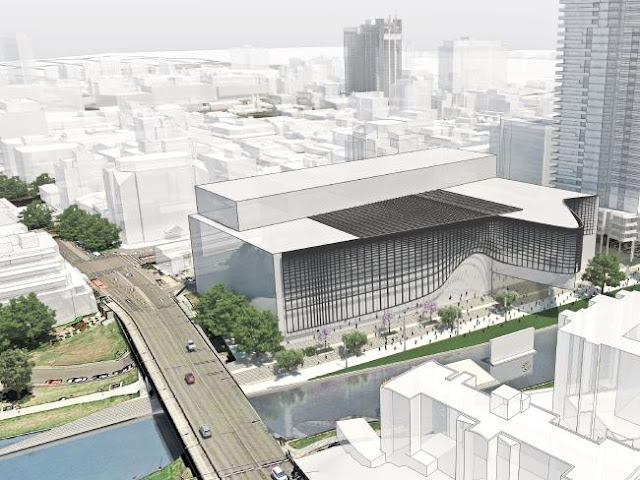 An artist's impression of the new museum on the Parramatta River. 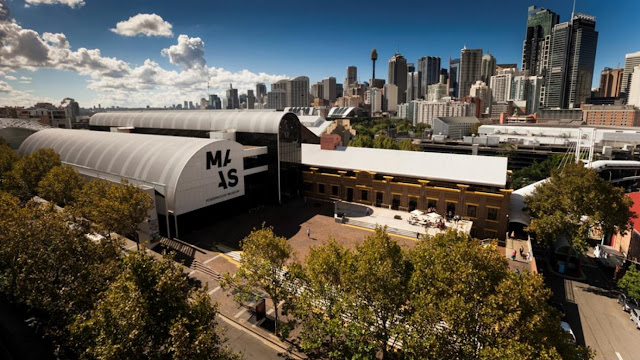 The present Powerhouse Museum is close to the city centre but restricted in display area. 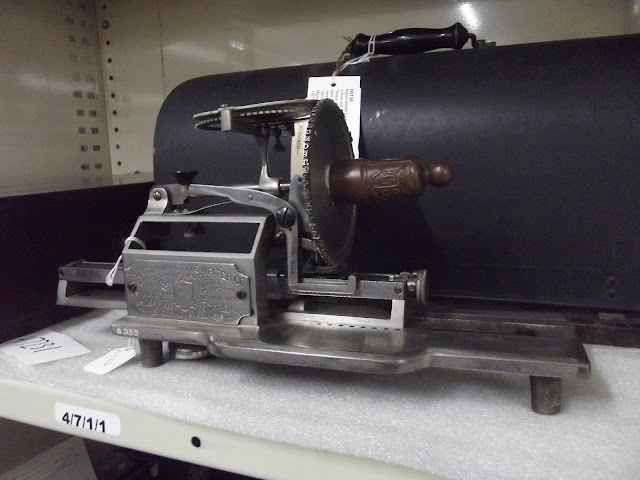 A Columbia is one of hundreds of historically significant typewriters in the present museum.
Sydney's Powerhouse Museum, which houses one of the most extensive collections of typewriters in Australia, is to be moved to the city's western suburbs, to the banks of the Parramatta River. The vision is to build a "Sydney Smithsonian". 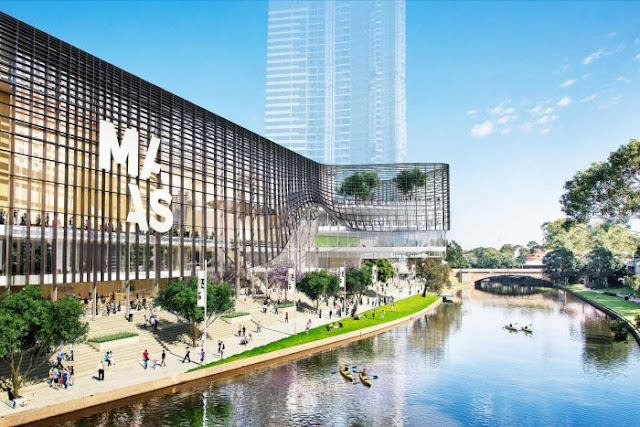 Officially, the facility is known as the Museum of Arts and Applied Sciences. 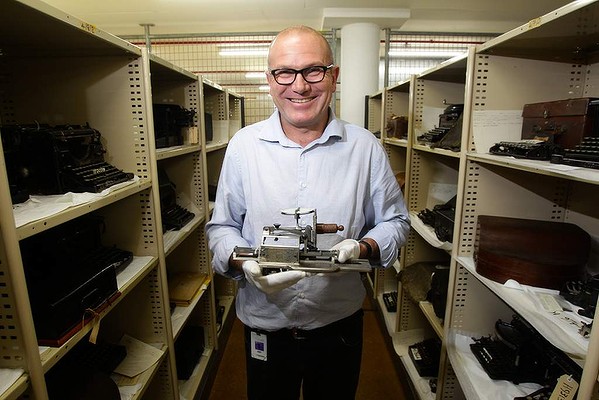 Above, Powerhouse typewriter curator Matthew Connell with the Columbia and below, with the museum's early Sholes & Glidden, which was donated to the Powerhouse by Chartres. 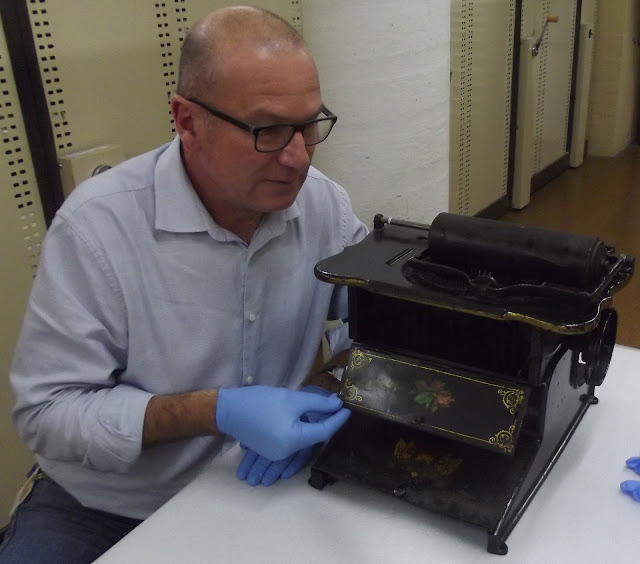 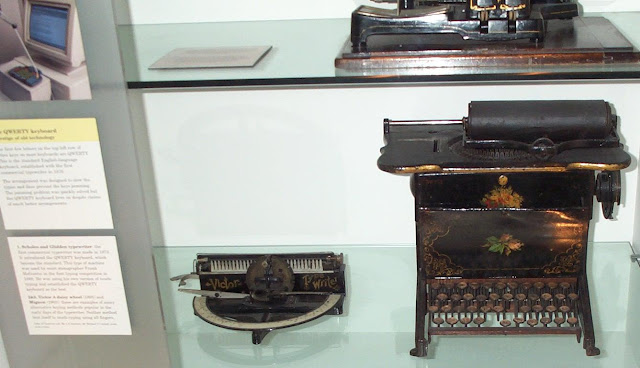 Very few of the Powerhouse's typewriters are ever displayed to the public.
Construction of the new site will begin in 2018 and be complete by 2022.  During that time, hundreds of valuable old typewriters will be taken from the vaults at the present site at Ultimo, close to the city centre, to Parramatta. Happily, the new museum will have the capacity to showcase 40 per cent more exhibits, allowing curators to put many more of its wonderful typewriter collection on public display. The New South Wales Government is hoping to lift visits to one million a year by 2030. The Powerhouse's typewriter collection is, among Australian institutions, comparable to only the almost equally impressive Museum Victoria collection in Melbourne. As with Museum Victoria's gifts to my collection (including a Salem Hall), I am bracing myself to catch one of two machines which might "fall off the back of the truck" during the Powerhouse's shift. Here's hoping! 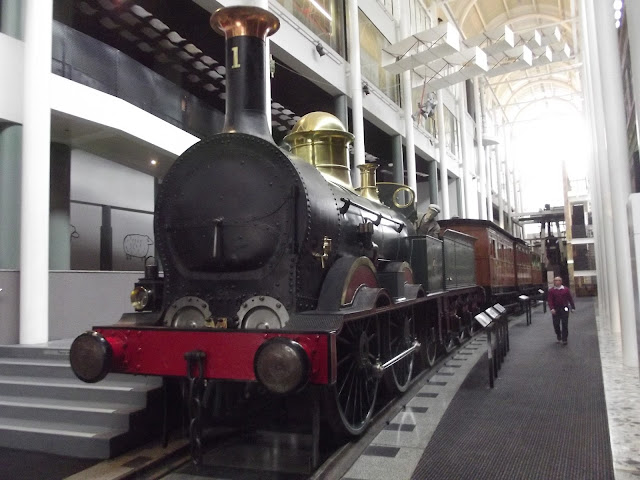 Among the hundreds of thousands of items to be moved is this train, which is in the entrance of the present Powerhouse.
The Museum of Arts and Applied Sciences is more popularly known as the Powerhouse Museum because of the site on which it was built. A name for the new museum has not yet been settled on, but Powerhouse may well be retained.
A few of the Powerhouse's typewriters: 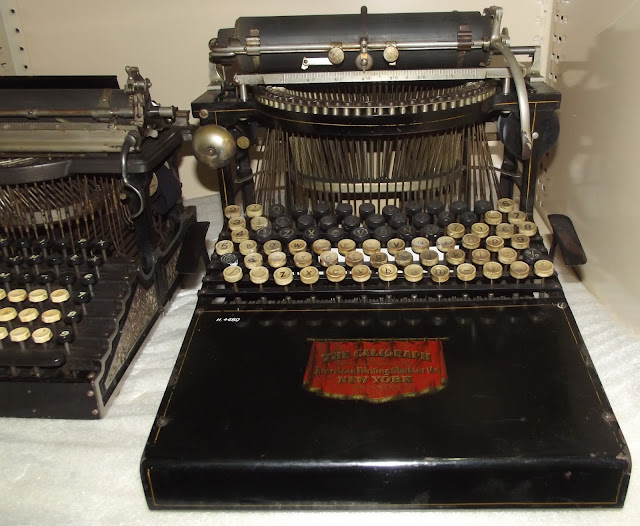 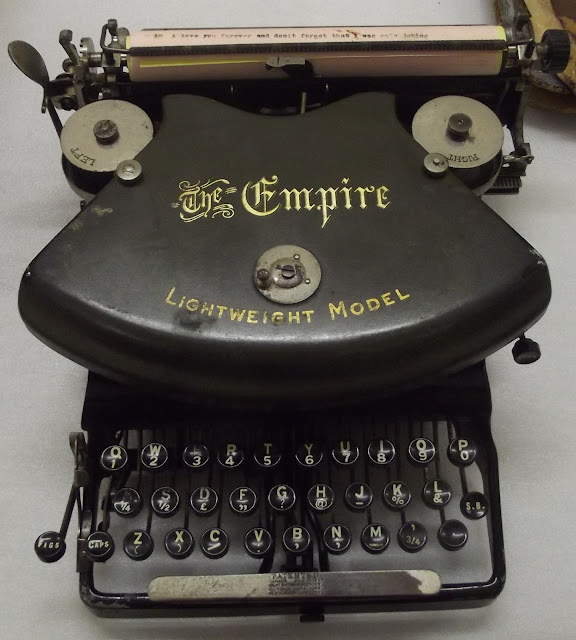 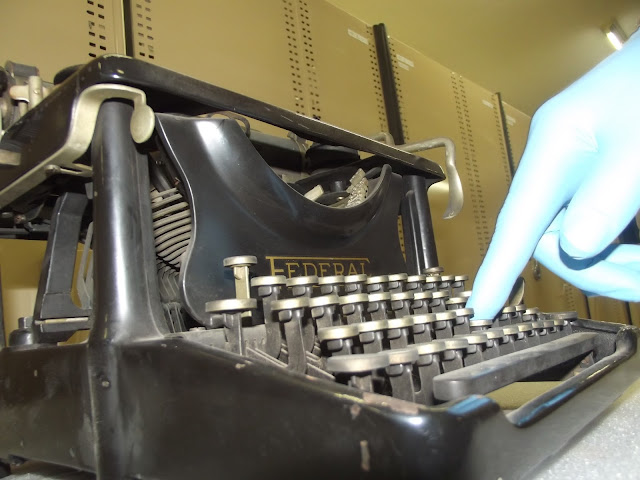 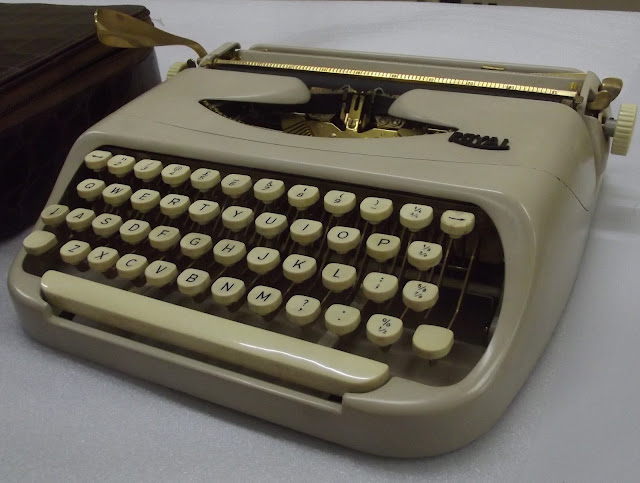 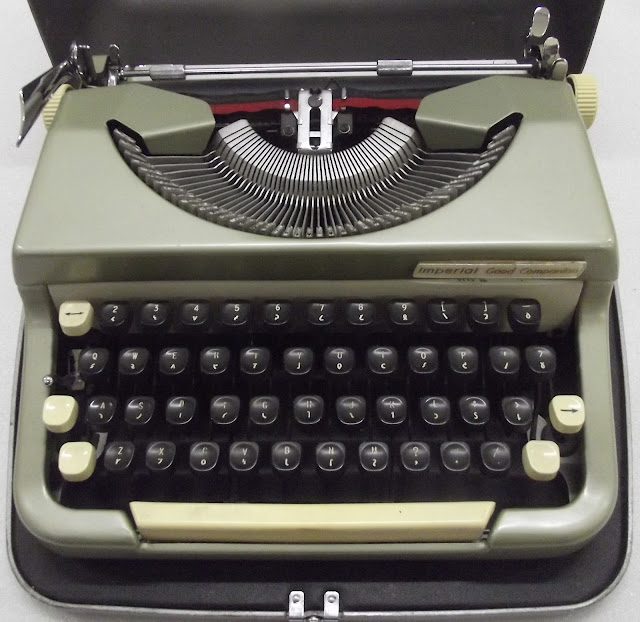 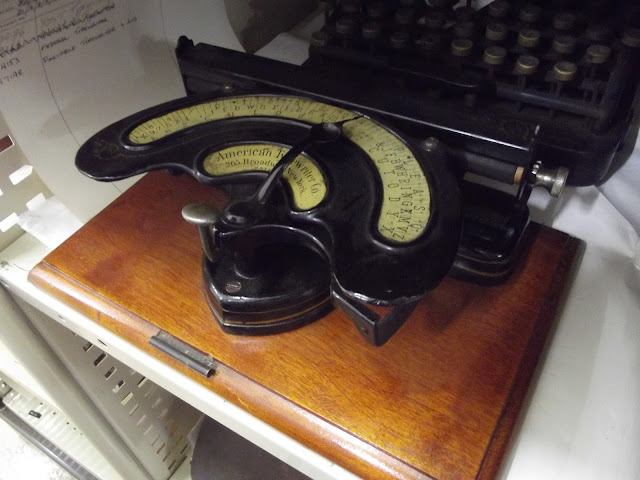 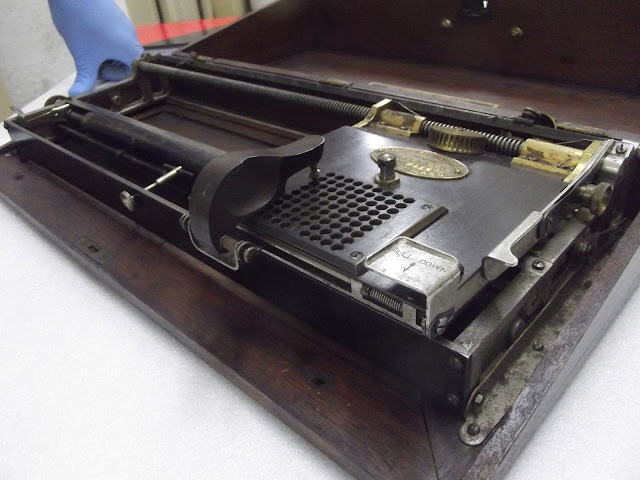 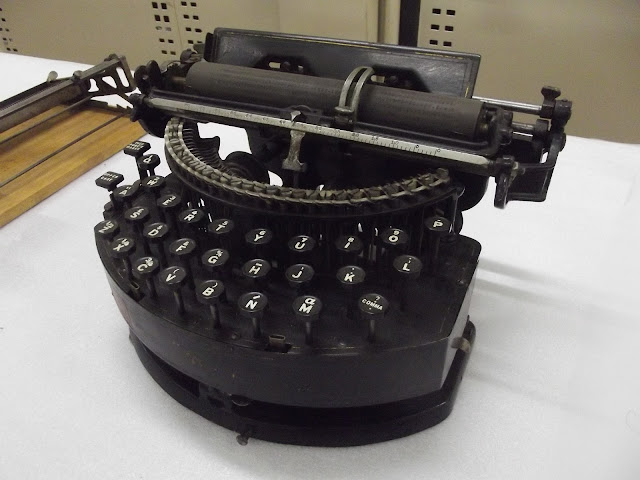 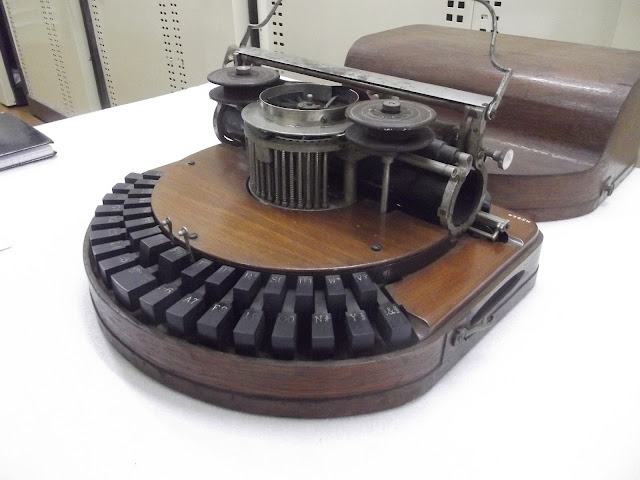 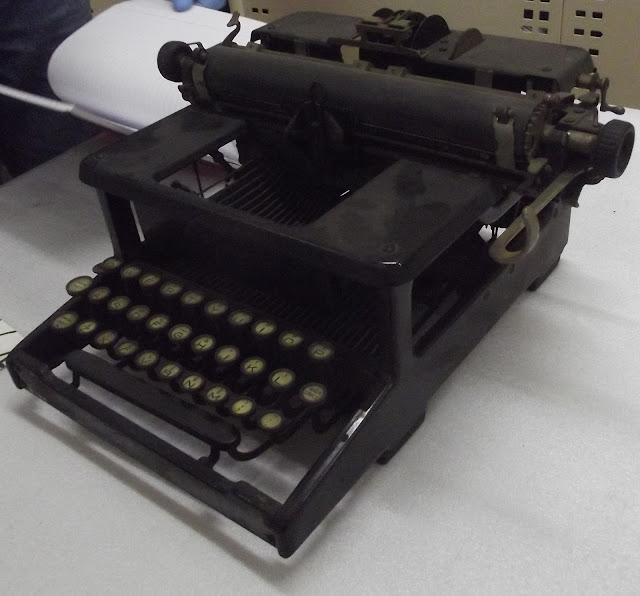 Looks like an exciting design for the museum's new quarters.

Yes, and I should have mentioned it will be much closer to Richard Amery's marvellous collection. Tourists might be able to do a two for one price trip!

I'd love to visit that museum!

Who can I donate an old Telex machine to?

I need a contact to donate a Telex machine.