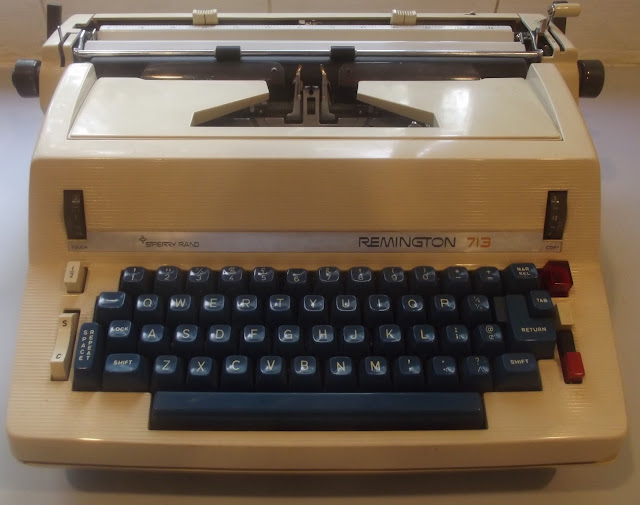 A 1969 Brother 1413 electric "compact" masquerading as a Remington 713. Why? Remington closed its Glasgow typewriter factory in February 1968 and, faced with an urgent need to meet a new market demand in 1969, had to come to an arrangement with Brother to rebrand Japanese "compact" electrics that were already on the US market. The reason? A strike shut down its Calcutta factory for six months from April 1969 and 1550 of Remington's Elmira, New York, machinists walked off the job on June 16. They picketed the plant, stopping thousands of typewriters from being shipped out, including those electrics assembled in Toronto, and they stayed out for four months. The solution? Simple! Buy Brothers at $110 and resell them under a Remington badge for $179. 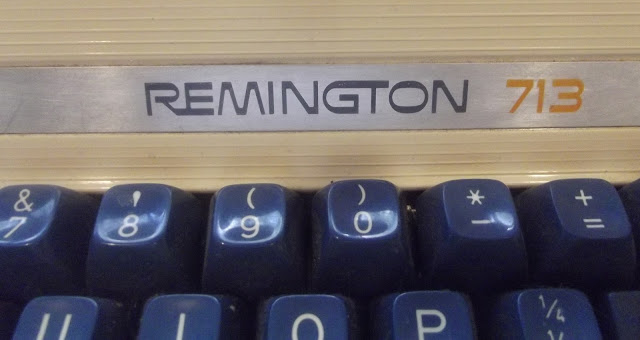 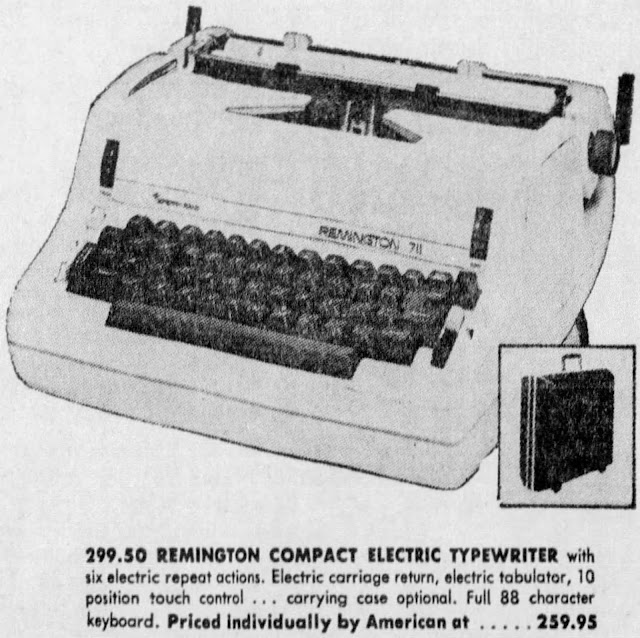 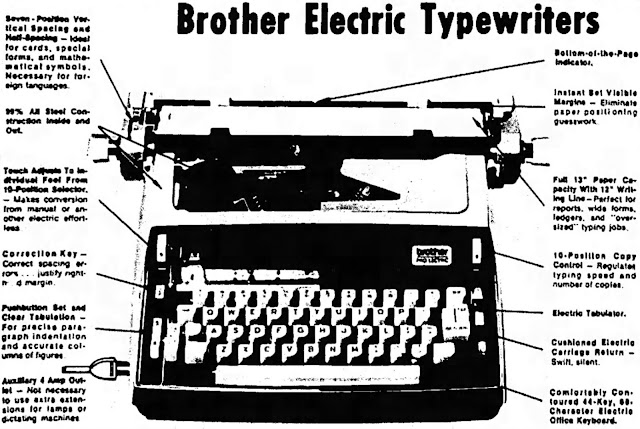 The Brother 1400 series advertised in 1969
When the Ettore Sottsass-designed Olivetti Praxis 48 reached the United States market in mid-January 1968 (as an Olivetti Underwood, of course; it reached the Australian market as an Olivetti in November that year), it sparked panic in the ranks of rival US and German typewriter companies. During the next five years, a plethora of competitors emerged in what was fallaciously called a "compact" electric typewriter field. 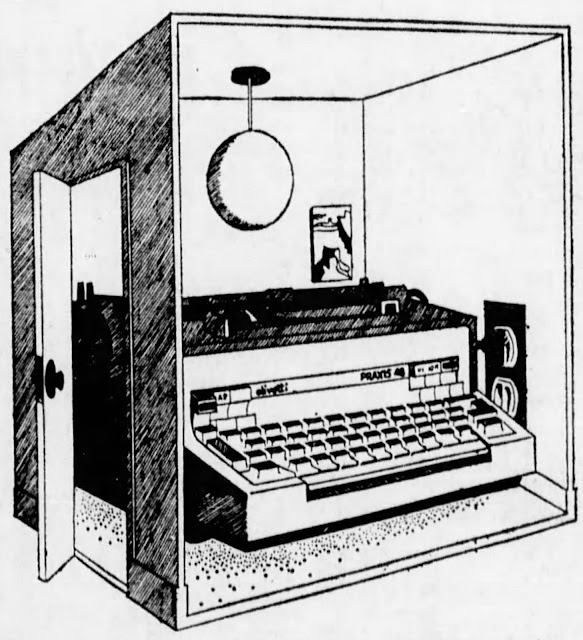 Cincinnati Enquirer, 1970
Predictably, none of Olivetti's opponents emerged with a design which came within a bull's roar of the timeless Sottsass classic (though they almost all copied the Praxis' high, square front). But the challenge was more about price than looks.
This was an attempt to create a new office machine niche in a market which had become so completely dominated by IBM (full-size, 46lb) that IBM sales were advancing at the rate Remington's, SCM's and Royal's were declining - and that's their combined losses! These new machines were also variously described as "intermediate" and "light duty and lower cost". Whatever might have been the case for their duties, they were certainly not cheap - many buyers would have got very little change out of $400, as some were not all that much cheaper than the 15in carriage IBM. Nor could it be said that they were in any way lightweight. The Remington 713 weighs a whopping 28lb, just six pounds lighter than a Remington 10! 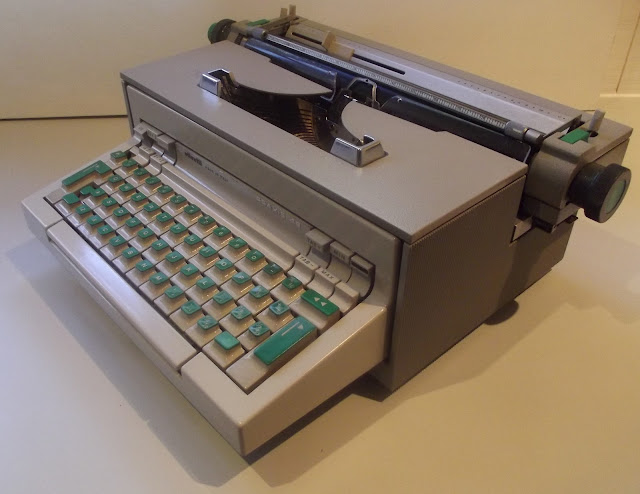 The last model to make its entry into this new field, in late June 1973, was the Adler MX: 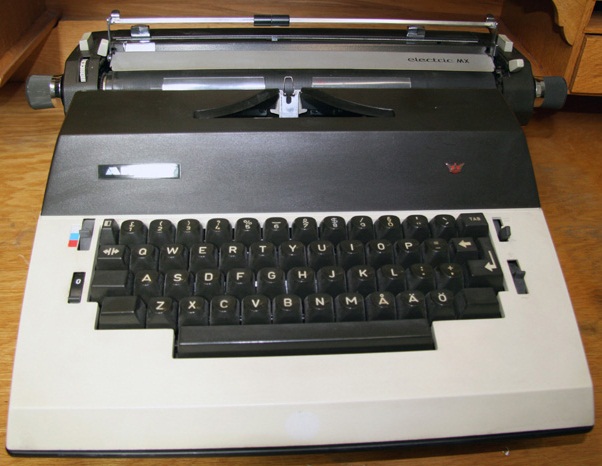 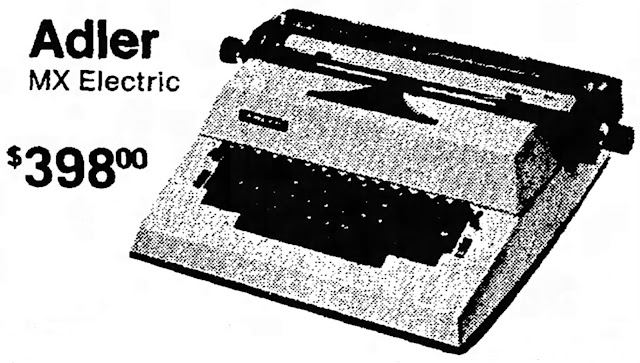 The other brands and models mentioned in this advertising blurb for the Adler MX were: 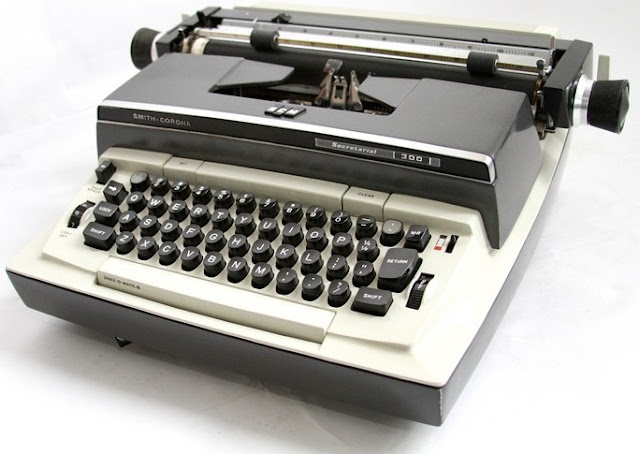 The Singapore-made Smith-Corona
Secretarial 300 of September 1972 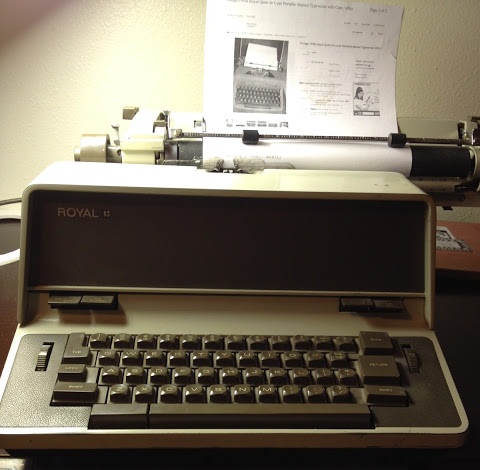 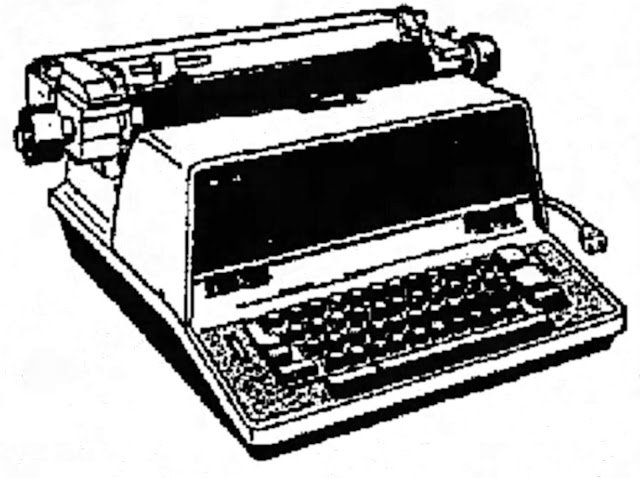 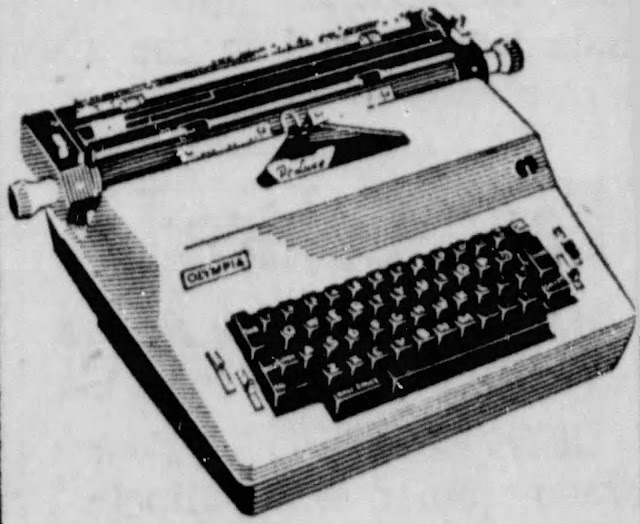 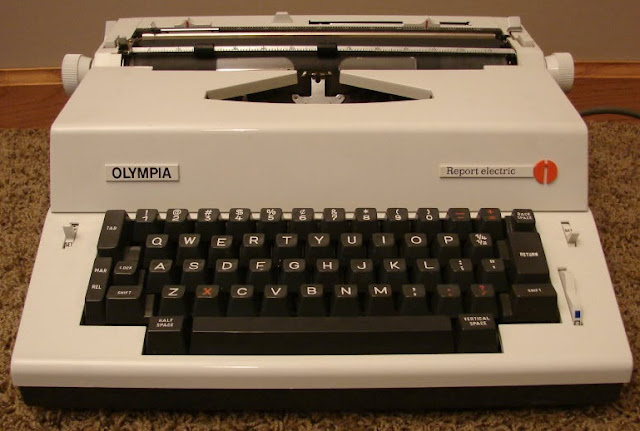 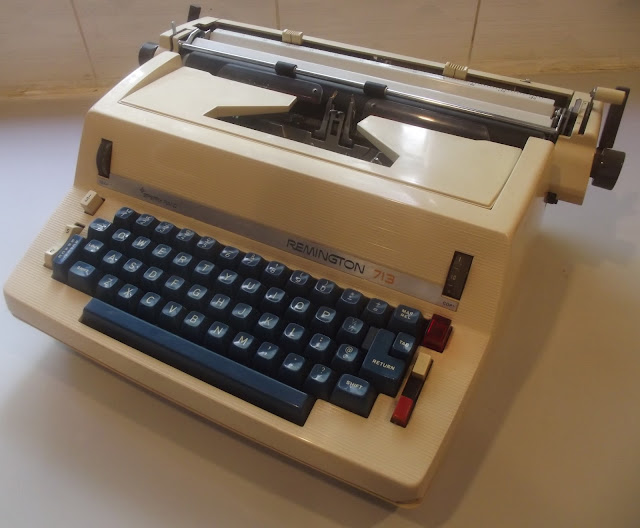 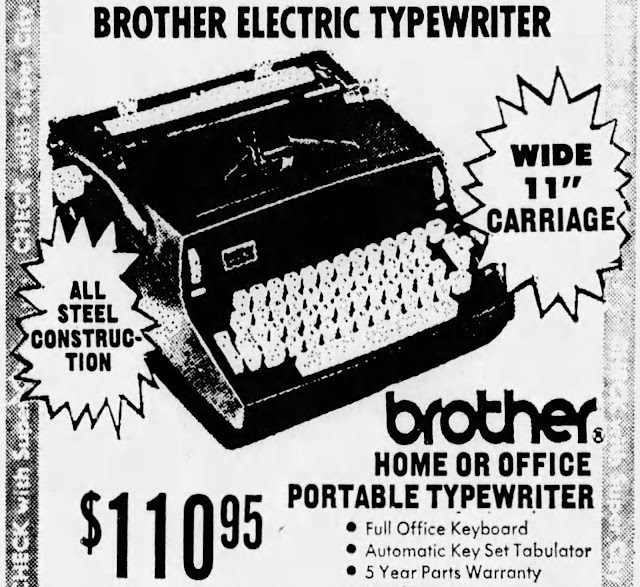 But ahead of the pack were the Brother 1400 series electrics, which reached the American market - at less than half the price of the Praxis 48 - in early April 1969. Nagoya mechanical engineers Yukio Hishida and Toshio Nakai had begun to apply for US patents for components for their typewriter in November 1968.
In a 1973 report on its findings in Litton Industries' appeal against a US Federal Trade Commission ban on its attempted 1969 takeover of Triumph-Adler, the FTC said: 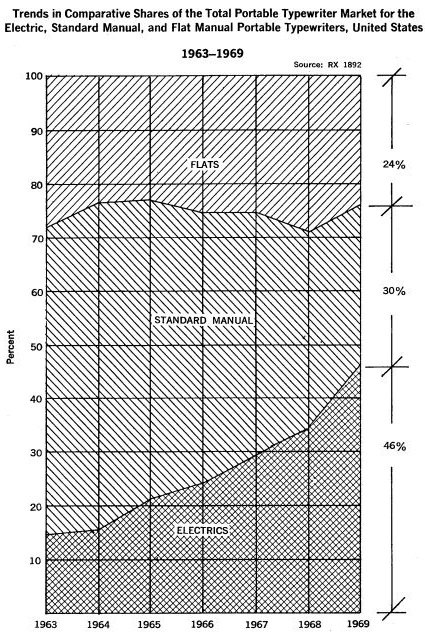 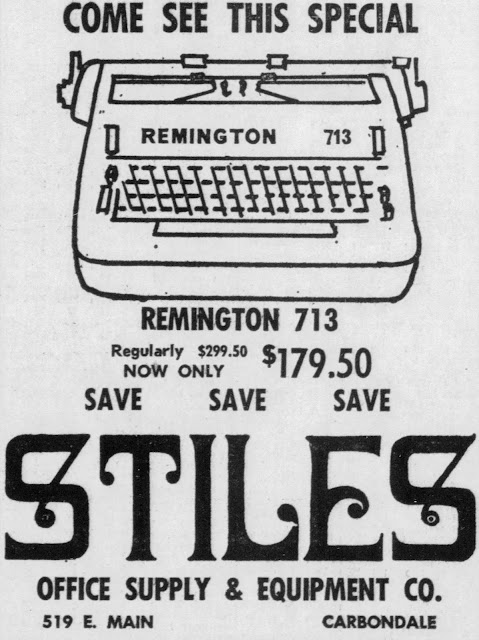 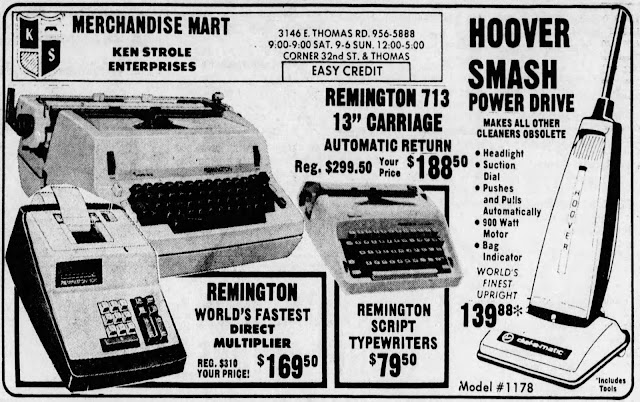 The Remington 713 reached Australia in November 1969, a year after the Praxis 48: 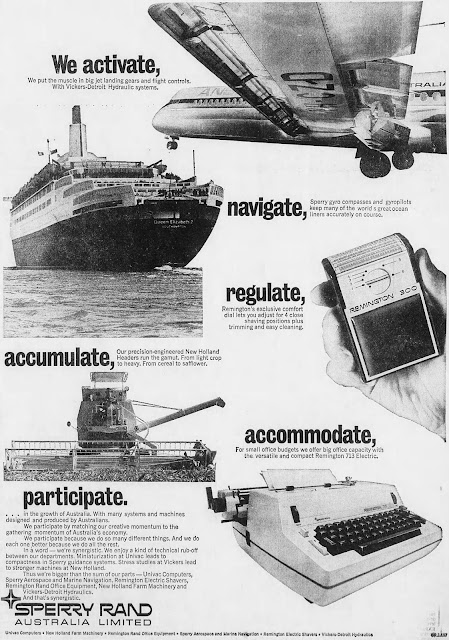 Last month Steve Kuterescz posed the question on his writelephant blog, "[What is] The smallest 'electric' (non-electronic) typewriter?" David Lawrence in Auckland responded by saying the Olympia Monica portable is the smallest package. For the record, I ran the tape over a couple of my machines and put them on the scales:
Remington 317: 28lb, 17 1/2 inches knob to knob, 6in high, 14in long.
Olympia Reporter: 17lb, 15 1/2 inches knob-to-knob, 5in high, 13 1/2 inches long. 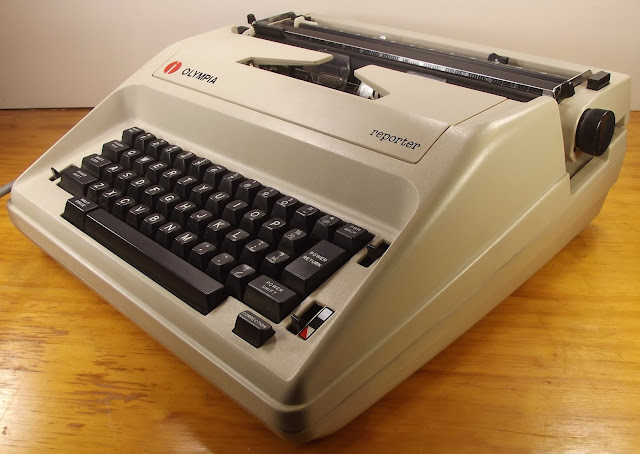 Eighteen months ago I wrote about a Facit 9401 electronic typewriter masquerading as a Remstar 2001. It came to me from the estate of a leading Australian public servant who, on May 7, 1987, paid a staggering $1525 for it. With the purchase, he traded in a Remington 713 for $350. I wonder if it's the trade-in I found at a recycling centre a few weeks ago? 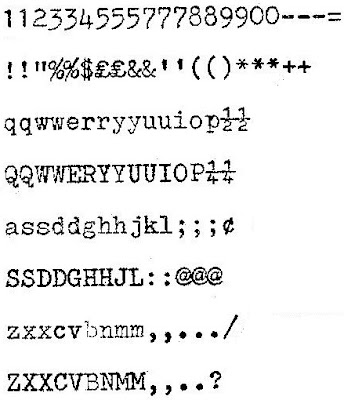 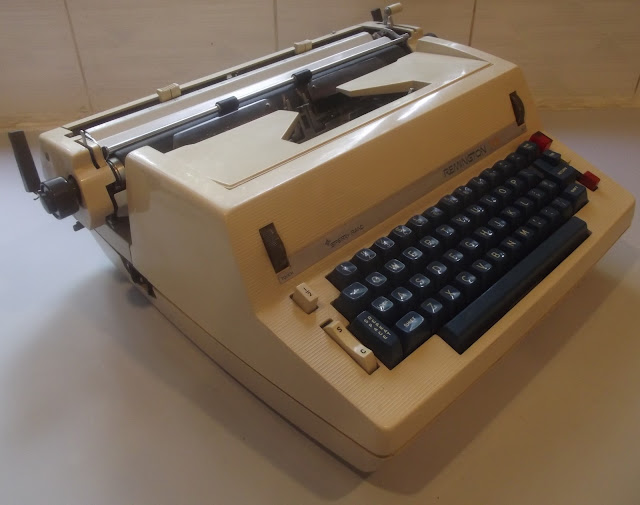 Posted by Robert Messenger at 15:50

An interesting survey of an understudied area of typewriter history. Thanks!

Nice group of electrics. I've never put much interest into electrics and even gave the 2 I had away. My first typewriter was a Praxis 48. I gave it away when I bought an IBM Selectric-II. Then in '94 when I bought my PC I gave the IBM away a few years later. Both were serious mistakes. Now I wish I had them.

Sorry, I do not have any weigh of way ying it at this present moment!

Interesting write up. Never thought I'd see a picture of the Royal 560 here (thanks for the shoutout). Compared to the Selectric, I don't think much of other electric machines.

Hi,
One of these showed up locally. I wondered about its build quality - is it all metal, plastic, etc?

I'm a latecomer obviously. I received today a non-working Remington 100E typewriter, which is a rebadged Adler MX. So apparently Remington was buying from whoever could spare the capacity!