Once Upon a Time in the White House: Pioneer Press Secretary Who Put a Premium on the Truth 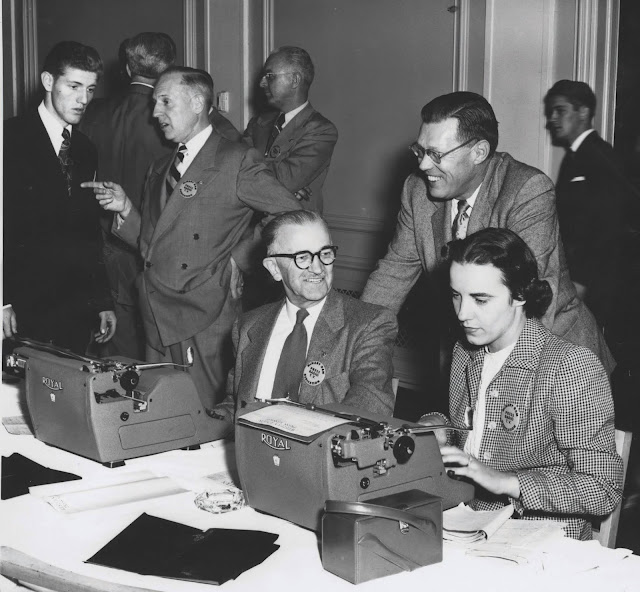 In October 1954, White House Press Secretary in the Eisenhower Era, Jim Hagerty, watches as Dorothy Rochon Powers (1921-2014), legendary reporter with the Spokane Spokesman-Review, types up her story on a Royal about President Dwight D. Eisenhower's arrival for the dedication of the McNary Dam on the Columbia River between Oregon and Washington. The Press Room was in the Marcus Whitman Hotel in Walla Walla, Washington. 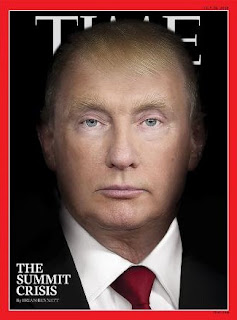 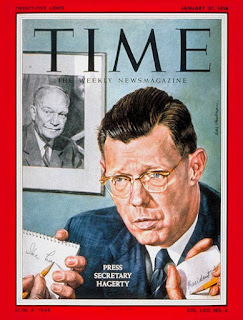 "We can't stand the truth": The 31st White House Press Secretary
Next Thursday, July 26, Sarah Huckabee Sanders will have been White House Press Secretary for one tumultuous year. It's unlikely the occasion will be marked by any change in the now familiar three-ring circus, the bizarre daily ritual which has come to characterise White Press press briefings, one which provides such bewildering amusement for the world at large. Little St Don, as George Saunders (author of Lincoln in the Bardo) dubbed him in The New Yorker this month, may be the ringmaster, but Sarah Sanders is the star trapeze artist, blithely and adeptly swinging from "misspoke" to "misspoke", balancing fable with fake news.

Under the headline "The World Burns. Sarah Sanders Says This Is Fine", Megan Garber writes in this week's The Atlantic, "The White House press secretary has set a new precedent: Partisanship over patriotism. Victory over truth. This is a White House that prioritizes the scoring of points over the complexities of compromise. Sanders, on behalf of the president she works for - a happy warrior in a culture war that has found a front in the James S. Brady briefing room at 1600 Pennsylvania Avenue - takes for granted an assumption that would be shocking were it not so common in the American culture of the early 21st Century: There are things that are more important than truth." 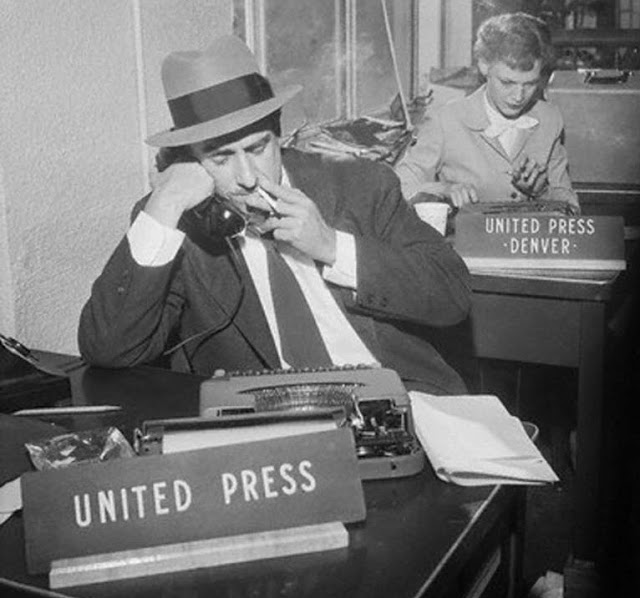 It wasn't always so. Indeed, it was almost never so, at least not to this scandalous degree. Yet again, for all the earnestness and apparent honesty of the White House's first full-time Press Secretary, Jim Hagerty - the ridgy-didge journalist who took care of Dwight D. Eisenhower, the last man before Little St Don not to have held an elected office before becoming President - there were also some light moments back then. United Press's seasoned White House correspondent Merriman Smith - seen above with Polly Witte filing their stories on Eisenhower's heart attack in Denver on September 24, 1955, from the Lowry Air Force Base, Colorado - was one of the large army of journalists who set up camp in Gettysburg, Pennsylvania, while Eisenhower recuperated at his white brick farmhouse, dubbed the "Gettysburg White House". Smith, reporting in November on Eisenhower's recovery, said "Outside the entrance to the temporary White House Press Room here is a large sign which says 'Matinee Today'. This does not refer to Press Secretary James C. Hagerty's afternoon Press Conferences. The sign is an ad for the movie house next door. Hagerty's conferences, however, frequently take on the aspects of a show. Hordes of college students and school children often descend on the conferences. The younger children, particularly, stand and watch the reporters banging away on their typewriters." To be fair to Smith, there wasn't a lot of hard news to report at the time. Eisenhower, who had suffered his heart attack while his visiting in-laws in Denver, secretly plotted his re-election campaign during his recovery, while Hagerty handed out updated medical reports. 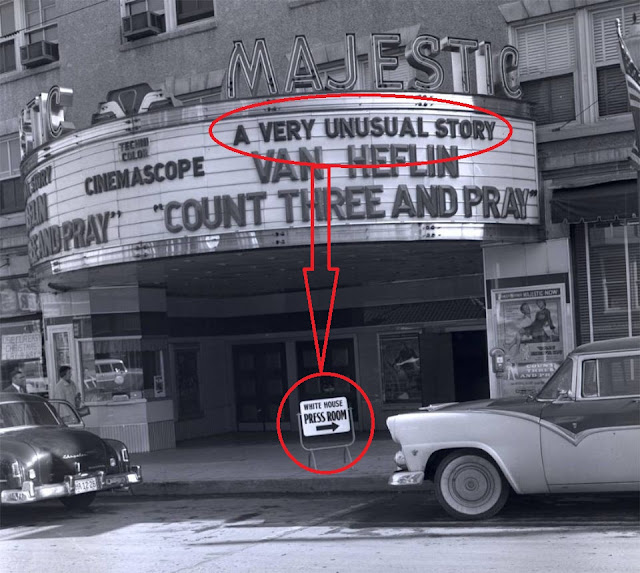 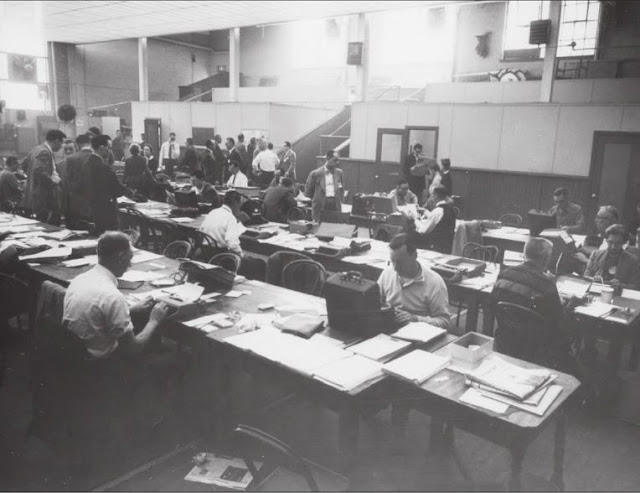 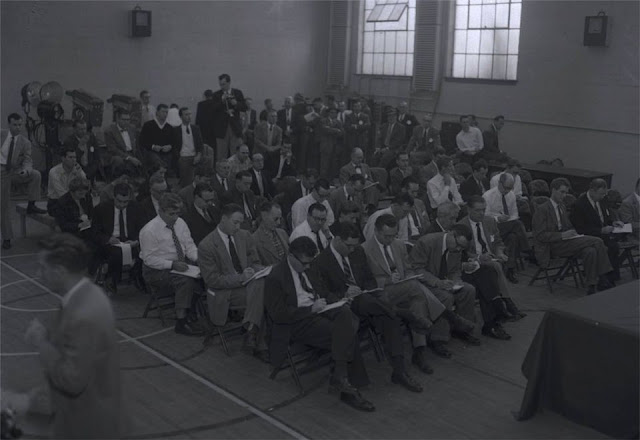 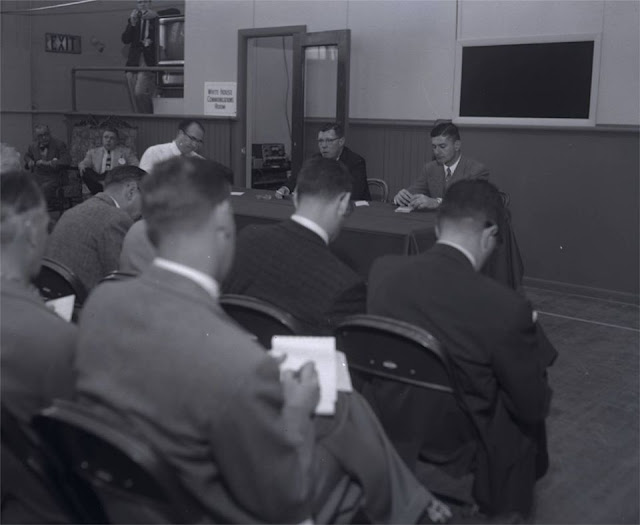 For the first week of Eisenhower's convalescence, Hagerty was the sole link between an anxious nation and its ailing chief. With a cool, assured touch, Hagerty meticulously informed a tense world about the President's progress. Behind the scenes, meantime, Hagerty played a significant role in the Administration's decision-making. Within a year, Hagerty had performed a similar service when Eisenhower underwent abdominal surgery. His performances in both crises won him more respect from newsmen than any previous Presidential press secretary. The Press called him - facetiously but affectionately - ''Iron Man Hagerty''. Hagerty had emerged as one of the President's most trusted advisers. He could handle reporters' questions and a golf club on the course with the President with equal skill. The Press liked Hagerty because he was honest.  Photographer Arnold Sachs put it best:  “If Jim told you something, you could take it to the bank.” 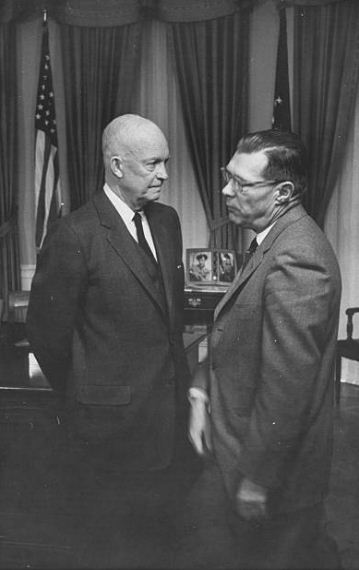 In its obituary for Hagerty, The New York Times declared, "At the White House, Mr Hagerty, who was known as Jim, won reporters' respect for his competence and candour." Will the same be said of his latter day successors, one wonders? 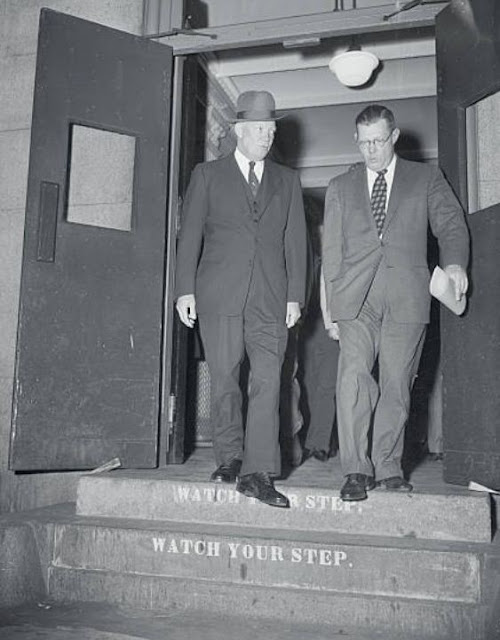 What we do know is that there is a range of remarkable coincidences between the time when Hagerty served Eisenhower and during this present period, during which Little St Don has been taken good care of by Ms Sanders (and his friend "Pootin"). For example, Eisenhower worked toward improved relations with the Soviet Union, even on the issue of nuclear arms reduction, and met with Nikita Khrushchev on a number of occasions. But these efforts were ultimately ruined by the U-2 incident in 1960. The Eisenhower terms were also marked by several Soviet spy scandals, including in the Middle East. Eisenhower achieved an armistice in Korea, against Republican Party opposition. While one talks of building border walls, the other, Eisenhower, painted for relaxation - his wife Mamie's favourite, "The Mexican" (1953), hangs on the second floor of the farmhouse to this day. 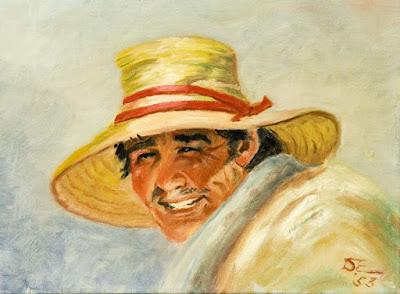 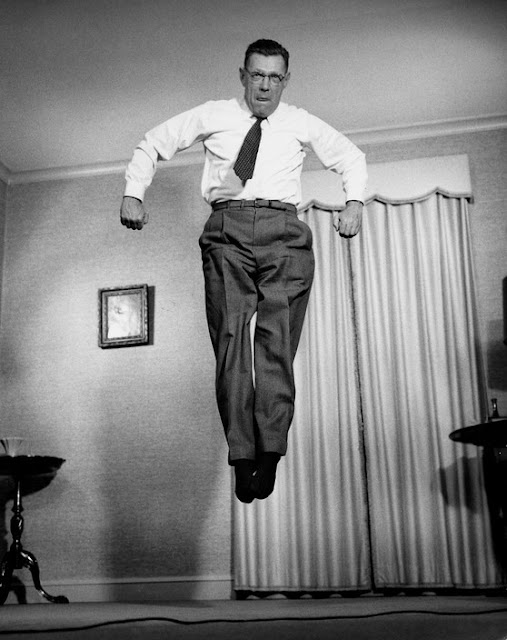 Jumpin' Jim flash
James Campbell Hagerty was in fact the seventh person since 1929 to hold the role of White House Press Secretary, but the first full-timer and the first to serve two full Presidential terms, from January 20, 1953 until January 20, 1961. He was also responsible for changing the role of the Press Secretary by instituting the practice of regularly scheduled Presidential news conferences. For the first time, everything the President said at a press conference could be printed verbatim; Hagerty abolished the longstanding rule that the President could not be directly quoted without specific permission. In 1955, he pioneered the admission of newsreel and television cameras to Presidential news conferences. Hagerty was known for providing much more about the lifestyle of the President than his predecessors, including the great detail he went into on Eisenhower's various medical conditions.

Hagerty did defend presidential policies and a handled embarrassing episodes, such as the U-2 affair. He took care of press relations on Eisenhower's international trips, sometimes taking on a hostile foreign press. Eisenhower relied on him for advice about public opinion, and how to phrase complex issues. Additionally, Hagerty had a reputation for supporting civil rights initiatives. On a wide variety of issues, he won respect for his competence from the vast majority of journalists. 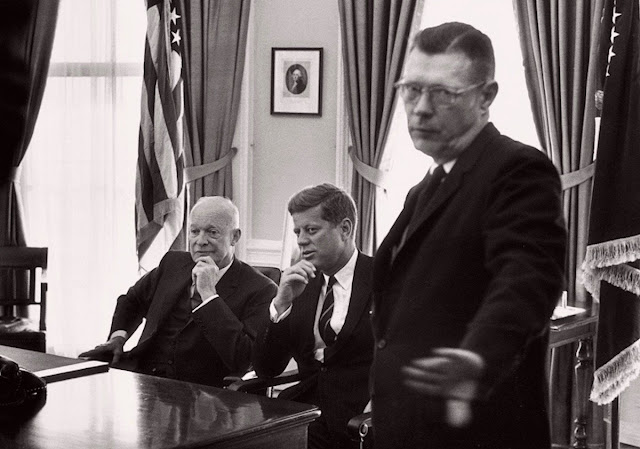 Born at Plattsburgh, New York, on May 9, 1909, Hagerty attended grade school in the Bronx and Evander Childs High School before enrolling at the Blair Academy. After graduation in 1928, he went to work on the New York Stock Exchange. The market crash sent him back to school and he received a BA from Columbia University in 1934. While at Columbia he became a campus correspondent for The New York Times, and he joined the Times's city staff on graduation (his father, James A. Hagerty, was the newspaper's chief political correspondent). James junior then worked as a legislative correspondent and deputy bureau chief in Albany. He became the press secretary to Governor Thomas E. Dewey, and handled Dewey's presidential campaigns in 1944 and 1948. He was in charge of Eisenhower's press office in the 1952 campaign. He introduced television cameras to press conferences in 1955 and occasionally handled political assignments from Eisenhower, such as liaison with the Senate. After Eisenhower left office in January 1961, Hagerty joined the ABC television network as a vice-president of news, special events and public affairs, and from 1964 was executive vice-president for corporate relations. He retired in 1975 after suffering a stroke.

Having spent nine years as a reporter on the other side of the news barrier, Hagerty was not blind to the reporter's dependence on deadlines, transmission facilities, prompt texts of speeches and statements and the frequent necessity of having to ask seemingly irrelevant and inconsequential questions. At his first meeting with White House reporters, Hagerty laid down certain ground rules that, in the main, are still a model. He said: ''I would like to say to you fellows that I am not going to play any favourites, and I'm not going to give out any exclusive stories about the President or the White House. When I say to you, 'I don't know', I mean I don't know. When I say, 'No comment', it means I'm not talking, but not necessarily any more than that. Aside from that, I'm here to help you get the news. I am also here to work for one man, who happens to be the President. And I will do that to the best of my ability.''
Jim Hagerty died at the Lawrence Hospital in Bronxville on April 11, 1981, aged 71. 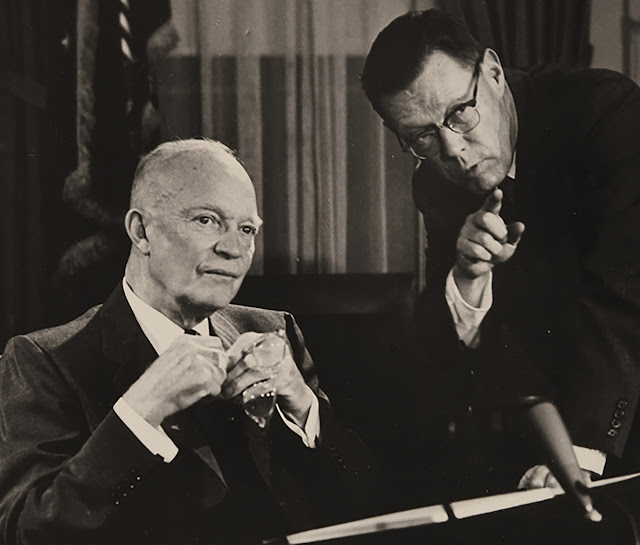 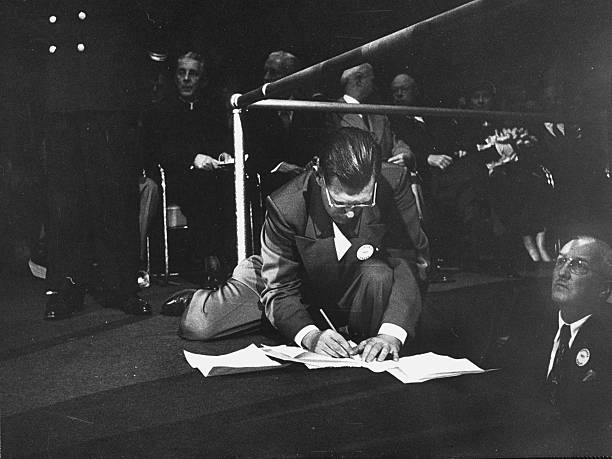 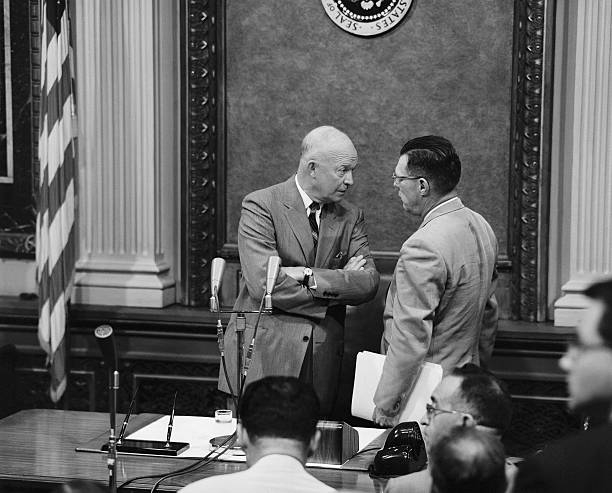 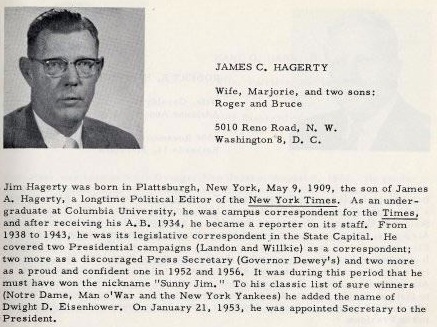 Posted by Robert Messenger at 21:24