The front page picture story in The Washington Times of May 3, 1911, sadly records Annie Lepley's name incorrectly as "Sepley", no doubt helping to condemn this pioneering typist to a life of relative obscurity.
Annie Bertrand Lepley was a 26-year-old stenographer in her home city of Washington DC when, on April 30, 1911, she got the idea to take a typewriter where no person had taken one before - and to type in the sky. She was working for Albert Francis Zahm (1862-1954), an early aeronautical experimenter and then secretary of the Washington Aero Club, at a time when Glenn Hammond Curtiss (1878-1930) was taking his Flying Circus across the country and was due to appear at Benning, Washington, on May 5-7. Zahm, who was at the time testifying on behalf of Curtiss in the  patent lawsuits brought by his former friends the Wright brothers, agreed to put Annie's plan to Curtiss in New York and the aviation ace was happy to oblige. Sadly, history does not record what model typewriter Annie took with her (it was her "favourite"), nor do we know what model aeroplane she flew in (likely to have been a Curtiss biplane). But we do know who flew it. The honour of taking Annie up in the air with her typewriter didn't fall to Curtiss, nor his Canadian offsider John Alexander Douglas McCurdy (1886-1961), but to McCurdy's younger brother Arthur Lucian Salisbury McCurdy (1888-1957). 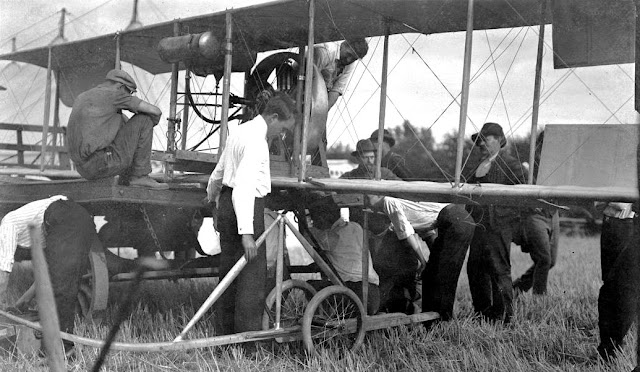 Lucian McCurdy can be seen centre foreground helping prepare
his brother's biplane in Toronto in August 1911.
The younger McCurdy was himself a pioneering pilot, though at the time of his flight with Annie was not one of the Curtiss performers, but business manager of the Flying Circus. History has also been unkind to Lucian, whose exploits don't rate even a passing mention in the many tributes to his brother Douglas or their father Arthur. 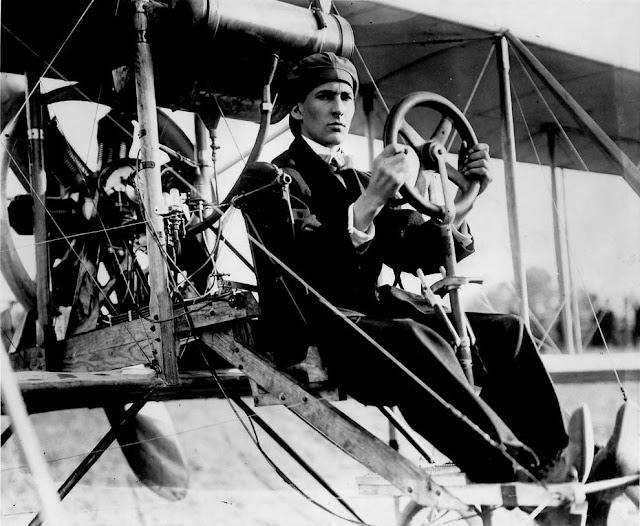 Douglas McCurdy, later Lieutenant Governor of Nova Scotia, joined Alexander Graham Bell's Aerial Experiment Association in 1907. The AEA was a research group for heavier-than-air flight experimentation, founded by Bell at Beinn Bhreagh, Nova Scotia, and Curtis was added to the association in 1908. That same year Douglas McCurdy and Curtiss set up the Curtiss Aeroplane and Motor Company. There are claims that in 1909 McCurdy became the first British subject to fly an aircraft in the British Empire when he piloted the AEA's Silver Dart off the ice of Bras d'Or Lake in Nova Scotia (above). However, New Zealander Richard William Pearse (1877-1953) flew several hundred yards and landed a powered heavier-than-air machine on March 31, 1903, almost nine months before the Wright brothers flew their aircraft. 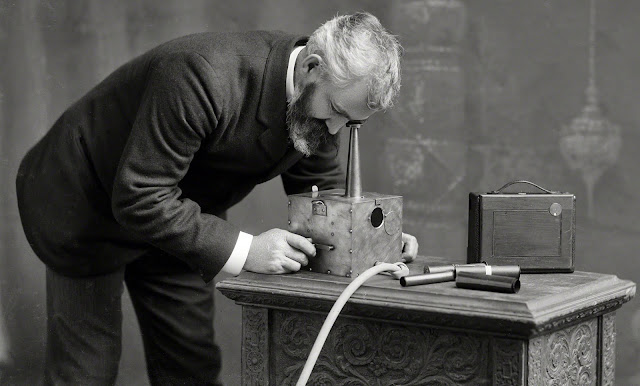 The father of the McCurdy brothers was Arthur Williams McCurdy (above, 1856-1923), an inventor and astronomer who from 1887 was a long-time private secretary to Alexander Graham Bell. Bell and his wife, Mabel Gardiner Hubbard, had been visiting Baddeck, two miles from Beinn Bhreagh, in the late summer of 1885. The McCurdys were early users of Bell’s device, having bought sets to link their store and homes. Arthur was having difficulty with the store phone one day when a stranger walked over and repaired it. “How did you know how to fix that?” asked McCurdy. “My name is Alexander Graham Bell,” replied the visitor. Bell and McCurdy became fast friends - they played chess and each had ceaseless curiosity and a love of invention. Arthur was offered employment by Bell as his private secretary, and for the next 15 years he would divide his time between Baddeck and Washington. Arthur's two young sons, Douglas and Lucian, became part of the Bells’ extended family. Bell broadened Arthur’s duties in 1889 when he reopened his Washington-based laboratory with Arthur as one of two assistants. Like Bell, Arthur embraced the art and science of photography. In 1899 this led to the development of one of his own successful inventions. His small portable tank for developing film in daytime, dubbed the Ebedec (the Native American name for Baddeck), has been used by generations of photographers. With financial assistance from Bell, he spent three years commercialising it. After obtaining a United States patent in 1902, he sold the rights to Eastman Kodak (for which Curtiss had first worked in Rochester, New York. Curtiss later went to Western Union as a bicycle messenger.). In 1903 Arthur McCurdy was awarded the John Scott Premium and Medal of the Franklin Institute in Philadelphia for his success in invention. 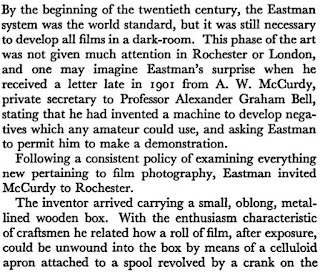 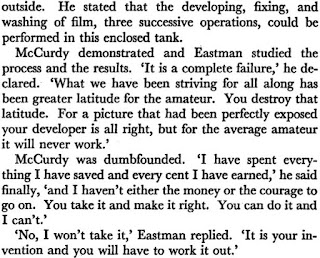 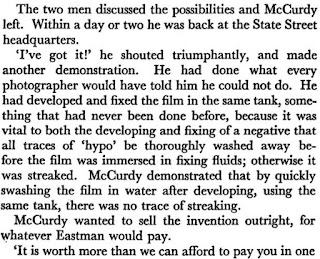 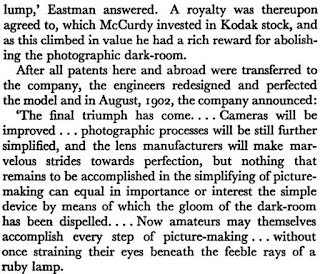 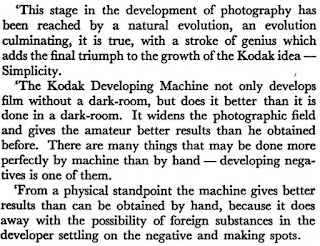 From George Eastman: Founder of Kodak and the Photography Business,
by Carl W. Ackerman
Lucian McCurdy, born in Baddeck on March 8, 1888, died in Toronto on January 12, 1957, aged 68. 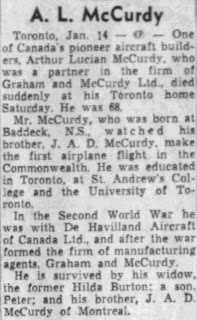 Finally, back to Annie Lepley. She was born in Washington DC on October 9, 1884, the daughter of a career librarian. Annie went on to become a stenographer in a law office in 1906. She died in Washington DC on July 21, 1936, aged 51, her typewriting milestone long since forgotten, and is buried at Mount Olivet Cemetery. 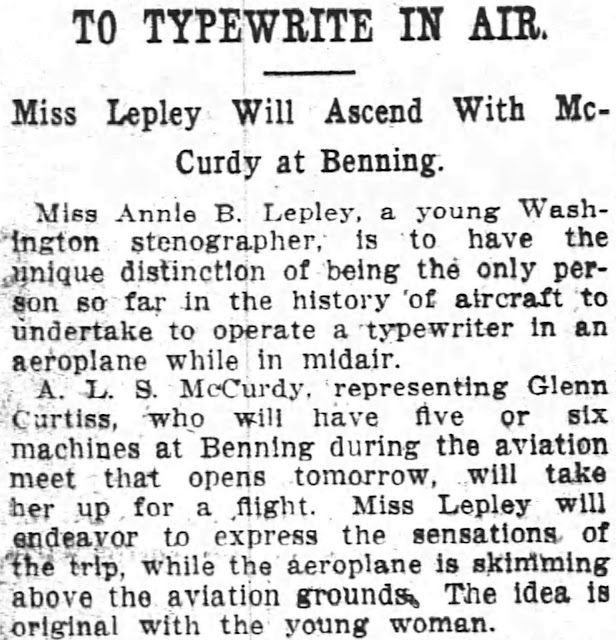 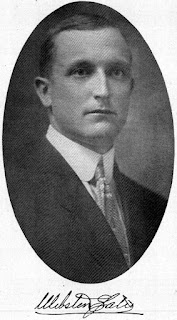 On September 7, 1912, 16 months after her historic flight-with-typewriter, Annie married attorney Webster Spates (left, 1884-1956), a Georgetown University graduate. From 1913 Spates was engaged in special work with the Department of Justice. After a brief stint in Alabama in 1916, and a few days before America declared war on Germany in April 1917, he was recalled to Washington and reengaged in the Department of Justice for war services, headquartered in Philadelphia. His assignments involved important matters connected with the national defence and involved investigating notorious war fraud cases (he arrested Detroit manufacturer and army officer Charles A. Ritzman, who was found guilty of accepting a bribe in connection with his official duties). In 1918 Spates was appointed special assistant to the attorney-general of the US. From there he went on to private practice at Miami.
Oh, and the Sydney Airport mentioned in the title? It's not our Sydney Airport. On July 27, 2009, the Sydney Airport in Nova Scotia was renamed J.A. Douglas McCurdy Sydney Airport.
Posted by Robert Messenger at 21:09

The comments of Anne Leply were very prescient. I always liked the idea that the Zephyrs/Skyriter was designed for use in airliners.

Interesting about the film tank.

I guess we could say Ms. Lepley was the original sky writer.