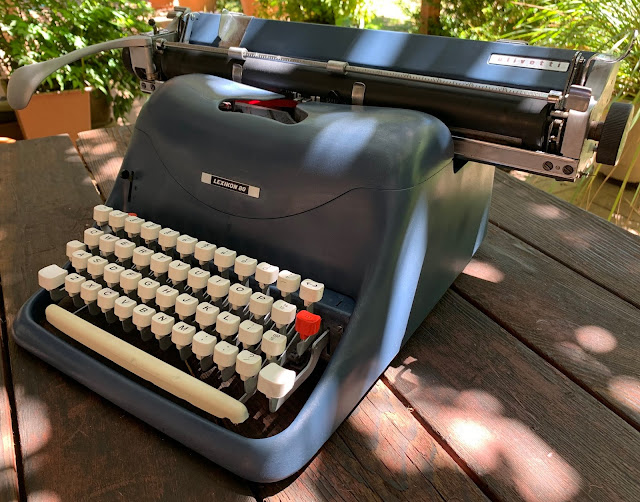 This is a very different Olivetti Lexikon 80 than the one I was given on Thursday morning. Different because it obviously doesn't have the same round, black Lexikon 80 keytops - the ones on this refurbished machine are from a discarded Olivetti Lettera 52, and they're being temporarily employed because the Lexikon I was given had quite a few keytops missing. Different, also, because it's not the seriously faded taupe colour it was (or at least appeared to be - in parts it was hard to tell) when I first glanced upon it, looking oh so forlorn on a kitchen stool on Thursday. (This colour is called Deep Ocean, in case you're wondering; I did toy with the idea of a darker shade of taupe called Jasper, but went with the grayish-blue). But, most importantly of all, this one is so very, very different because it is now in perfect working order. 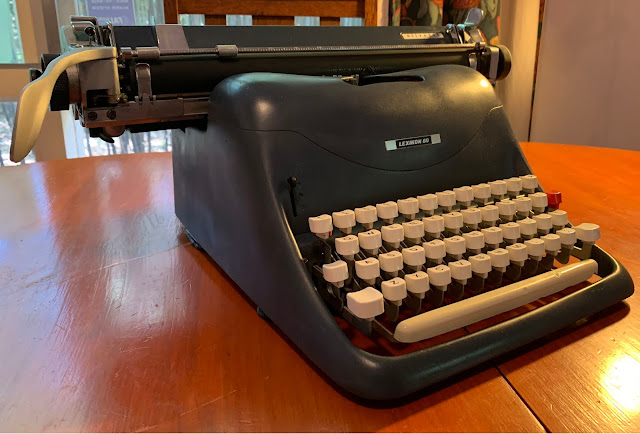 As I indicated in my last post, about work done on the Remington Compact portable given to me by Jack Palmer, the Lexikon looked at the time to be potentially an absolute nightmare. Resurrecting it from the dead turned out to be not quite as hard a task as I thought it might be - but it still took the best part of two days' work. Yet again I am regretting not taking "Before" photographs - I was too eager to get on with the job, and started taking the Lexikon completely apart without thinking of taking photos.
This was undoubtedly the most unprepossessing restoration project I have ever taken on. I gave myself little chance of bringing the Lexikon back to life. But it was given to me as a gift, so I figured I might as well at least try. And taking it completely apart was the first step. Nothing on it worked. The margin setters were rusted to their bar, the typebars were rusted together, the key rods were rusted and unmoveable, the drawband was, as I suspected and soon found, shredded, and the carriage simply wouldn't move in any direction. This Olivetti had, like Monty Python's famous Norwegian Blue parrot, gone to meet its maker, was bereft of life, had kicked the bucket, shuffled off its mortal coil, run down the curtain and joined the bleedin' choir invisible. 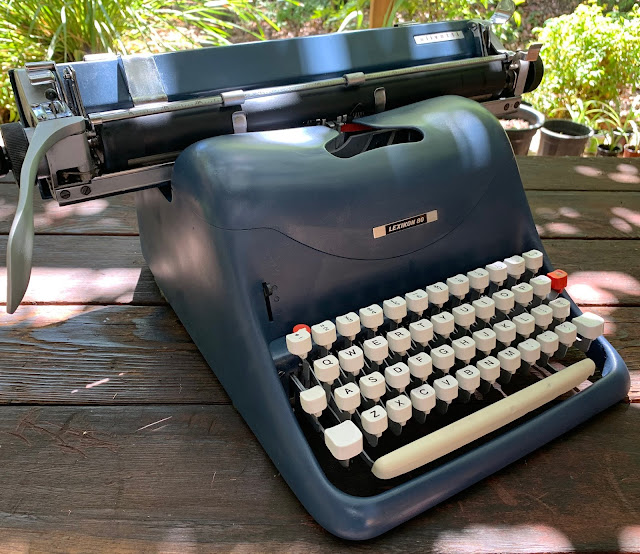 The outer signs weren't good - what there was of paint was, as I said, seriously faded, there were red and white paint spots across the front, the front section was bare metal (the paint had either been chipped or worn away), and on top of the ribbon spools cover was a most unappealing red "SOLD" sign - goodness knows what it might have fetched in this condition. Happily the sticker was old and dried and it just fell off. That was a promising start to proceedings. But the carriage section was richly laced with rust all over and needed a lot more elbow grease.
Once the casing was removed, however, the really serious problems emerged. Dead spiders, bugs, large lumps of thick matted lint, acres of dirt - and that was just for starters. There was rust everywhere. This was the filthiest typewriter I have ever encountered - and take my word for it, I've seen some filthy typewriters in my time. Yet the more grime and muck I found, the more determined I became to clean it up.
Yesterday was mostly spend on disassembling, repainting and getting the carriage, margin setters, keys and typebars to move properly, as well as degreasing, lubing, cleaning and removing rust. Today was mostly about attaching a new drawband (which also meant fashioning a new grip on the right end of the carriage), putting on the temporary keytops (a few don't correspondent with the typebars, as you will see from the scan below, but all will be well when I get replacement Lexikon keytops) and reassembling the machine. I removed the tab keys and bar from above the keyboard as I don't use such things.
What a good feeling when, finally, the Lexikon 80 started typing beautifully, as a Lexikon 80 should: 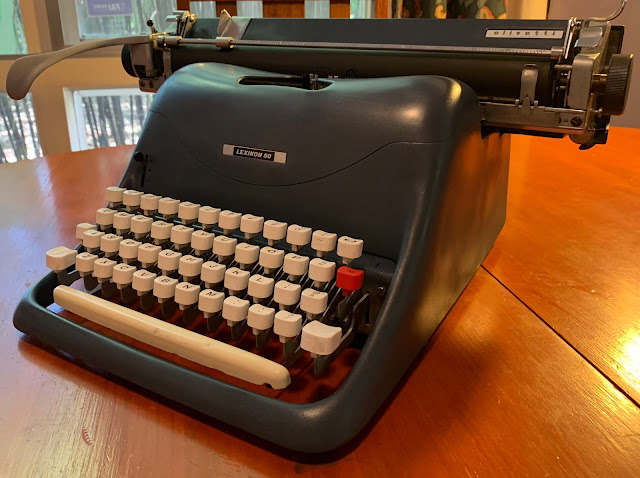 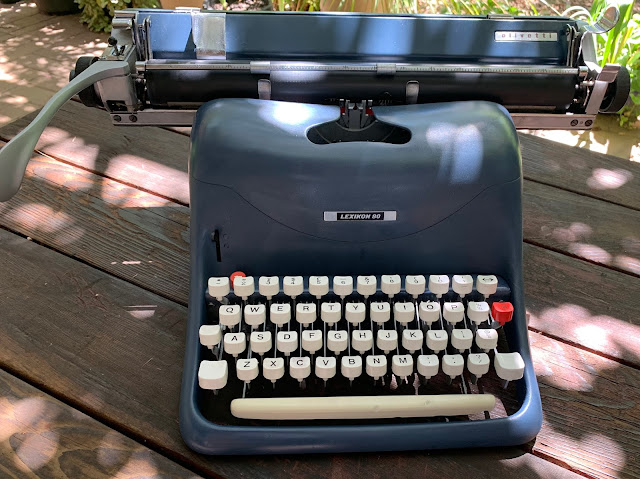 Just a few little touch-up jobs left to do, such as the spots for the ribbon colour switch, though since we can only buy black ribbon in office supplies shops in Australia, I might not bother. The important thing is that I can now type away happily on this machine because, as far as I'm concerned anyway, it's now a fully functioning Olivetti standard. The transformation from the machine I collected on Thursday is, even if I say so myself, remarkable, and I guess a salute to the durability of old Olivettis. 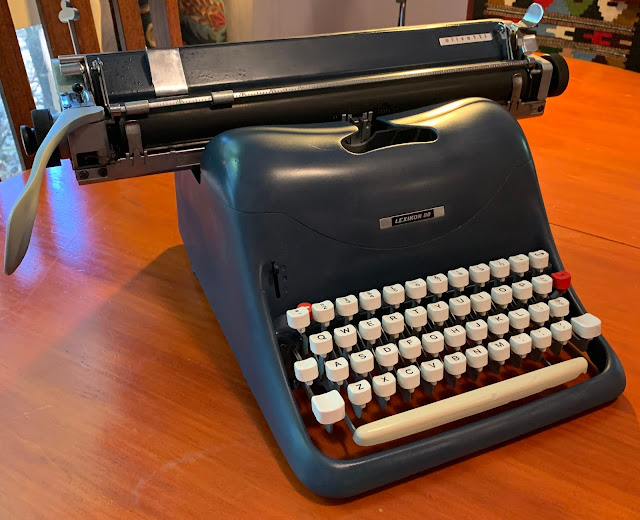 This typewriter is BACK in the land of the living! 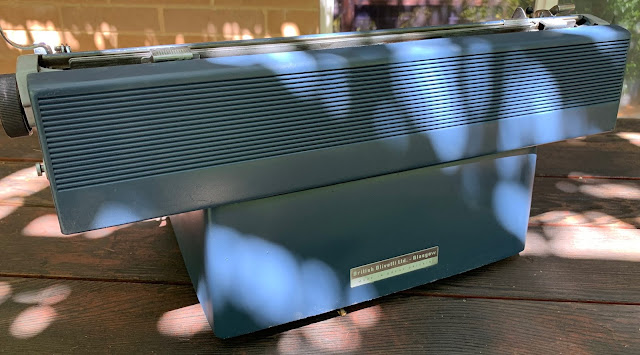 I have done the same with not taking before pictures. The important thing is you know how it was, and we all get to see how it is due to your fine efforts of restoring it to life.

What an achievement! I actually like these keytops on it.